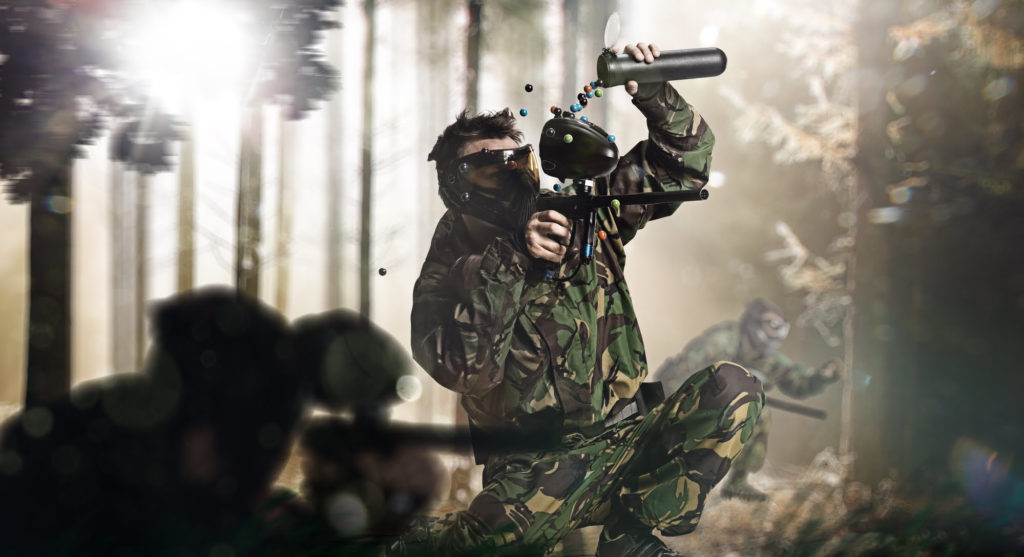 There are lots of entry-level markers out there but what if you’re no longer a beginner? You must be looking for the next best paintball gun to help you win at your woodsball games. As you may know by now, some markers are made specifically for woodsball. These guns are more durable and reliable in a forest-format terrain instead of an obstacle-course-looking area.

One of the markers that are known in woodsball paintball is the Dye Assault Matrix or simply called DAM. This gun is a favorite among seasoned players because its features were perfectly thought off – not just put on because it will make the gun sound sophisticated. As you read this review, you’ll find that the DAM is just as impressive as it looks.

Dye has been around for more than two decades but it has never failed to surprise its paintball customers. What started out as just a small paintball designer with only one marker to show for is now one of the most innovative paintball gun manufacturers in the industry.

Dye Precision was founded by Dave Dehaan in 1994 with the hope of making technology-driven and sports-centered paintball guns. Its line of paintball markers is a testament to the execution of this vision. If you’ve ever held a Dye paintball gun before, then you know what people say about how sophisticated it is.

Today, Dye Precision maintains an impressive line of paintball markers and snow equipment. One of its flagship models, the Dye Dam Assault Matrix is one of the most popular models the company has made.

A Quick View of the Dye Dam Assault Matrix

The Dye Assault Matrix paintball marker is not your average gun. Sure, it can be used by beginners but they won’t have as much fun with it as a tactical player. In fact, the Dye Assault Matrix was made for snipers and woodsball fans because of its speed, accuracy, and aesthetics.

This marker is equipped with the best features that you never thought would be necessary to have. One of these features is the On the Fly switch (OTF) that was made to make it easier to unlock your gun’s capability to fire First Strike rounds. Another feature you will love is the Box Rotor. While most people are content with the hopper as its only storage of paintballs, Dye made use of a giant magazine underneath the gun. This serves as additional storage for 325 paintballs. Talk about never running out of paintballs!

These are just some of the features the Dye Assault Matrix has. Interested to know more? In the next section is the detailed list of features of this high-performing marker.

What else is there in the Dye Assault Matrix? Here are all the exciting features Dye has put together to make one of its best guns.

The Dye Assault Matrix has a dual-sided magazine that stores both the 0.68-caliber paintballs and the first strike paintballs. The two separate magazines are necessary to make sure that the different paintballs don’t mix together. It makes storage easier especially if you plan to use them at different times during your game.

Speaking of two different paintballs, ever wondered how you can easily change the kind of firing this marker does? You can do this with the On the Fly switch made by Dye itself. This OTF switch is one of the best features of this marker. What it does is change the marker from regular shooting speeds to a first strike projectile. It’s as easy as that – you flip a switch and you’re suddenly shooting like a sniper!

There are three firing modes available in the Dye Assault Matrix, namely, semi-auto, full auto, and three-round burst. You can also manually adjust the firing modes depending on your needs and preferences. You can do all these during the game because this paintball gun has an easily programmable board.

The only downside to this is that it doesn’t have a screen telling you what firing mode it’s in but don’t worry, there are indicator lights just above the buttons to guide you through the board. Other than the firing modes, you can adjust the trigger sensitivity, rate of fire, and dwell.

The DAM bolt is a trademarked invention of Dye. Although this is just a small part of the marker, it does a lot in terms of ease of use. Because of this bolt, you don’t have to use tools when you have to maintain your marker. All you need is a steady pair of hands.

Dye designed the Dye Assault Matrix’s bolt to be user-friendly. Since a lot of paintball players complain about how difficult it is to maintain a gun, Dye invented a way to make it easier and quicker. Besides, you will rarely have to maintain your marker since it was designed for minimal maintenance. Regular lubrication will do.

Every paintball gun has its in-line regulator. By default, the Dye Assault Matrix’s regulator is set at 150 PSI. This produces a velocity of 285 ft/s. For some, this is too slow, so the great thing about this paintball gun is you can easily adjust the regulator.

The Dye Assault Matrix has an Allen Key that you can adjust to increase or decrease the pressure. Take note, though, that this marker has a break-in period so you might notice that the velocities the first time you use it is a little inconsistent. Dye suggests shooting around 2,000 paintballs to fully break in the Dye Assault Matrix.

As mentioned earlier, you can easily adjust the trigger in the programmable board. You can adjust its delay and sensitivity to fit your preferences. This simple feature is very important because it helps you feel more comfortable with your marker. Although it would be better if the trigger area were a lot wider, Dye makes up for this by having a trigger travel adjustment.

Pros and Cons of the Dye Dam Assault Matrix 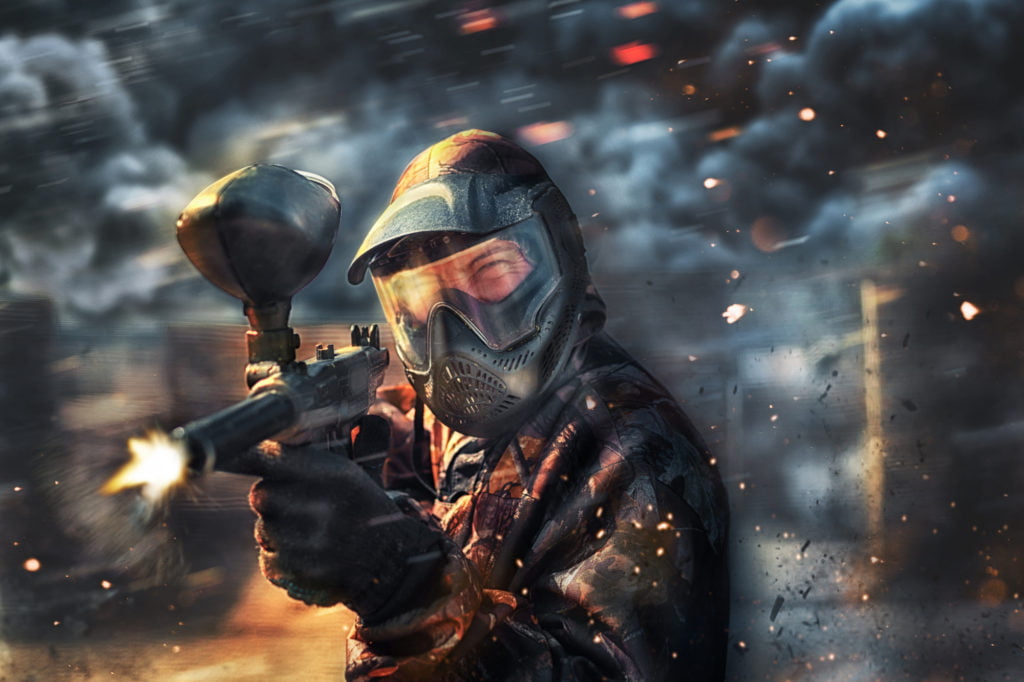 The Dye Assault Matrix has a lot of good features, but is the marker all that good? Know how it fares with this short pros and cons list.

There’s very little to do with the Dye Assault Matrix when it comes to maintenance. It has a quick-release bolt that helps you gain access to the internal parts of the paintball gun for easier cleaning. No tools required! What’s even better is that Dye included a lubricant for your firing bolt. Everything that you need to keep the gun working well is in the package.

A lot of people are surprised by how long the Picatinny rails are on Dye Assault Matrix. There are around 2 feet of rails (one on each side) that you can use for all your accessories and modifications. This is perfect for people who want to improve their marker to make it more efficient.

On a fully-charged battery, you can shoot as many as 40,000 shots. While you aren’t likely to use up all these in the next 5 paintball games, it’s still nice to know that you don’t have to charge your battery after every game. Dye has been great to include a 9-V battery together with the gun, so you can use it right away. You’ll know if the battery needs charging when the light at the board blinks.

Now that you’ve read through the features, you know that this isn’t for beginners. Unless the beginner understands all those terms or can fully utilize a full tactical paintball gun, they can learn to appreciate what the Dye Assault Matrix has to offer. However, not everyone’s a fan of woodsball and not everyone’s an intermediate player yet. If you’re a beginner, you’re better off with a real entry-level marker.

Did you know that the Dye Assault Matrix isn’t compatible with CO2? Yes, you can only use compressed air or nitrogen. If you’re a fan of using CO2, this can be a major drawback. Unfortunately, there isn’t any accessory or feature that can allow for CO2 use.

Well, it’s not that heavy but if you are comparing it to lightweight markers that only weigh more or less than 1 pound, you’ll be disappointed with the Dye Assault Matrix. This marker weighs almost 5 lbs, so you need to be used to carrying this weight for you to use it comfortably in the field. However, even those who are used to carrying heavier weights claim that it can be tiring to bring the Dye Assault Matrix around with one arm.

The Dye Assault Matrix has a narrow trigger area, so you will be forced to just use one finger to press the trigger. While this is not always a bad thing, some players prefer to have a two-finger trigger. Besides, the Dye Assault Matrix’s trigger area is too small even for people with slim fingers. Hopefully, Dye makes an improvement on their next model so that players can easily adjust their hold on the trigger.

The Dye Assault Matrix retails at around $1,499. This is more expensive than most markers even the ones that were made for intermediate players. Needless to say, it’s not for people who don’t know if they love to play woodsball. This isn’t even a good investment if you’re not sure if you love paintball.

How Does the Dye Assault Matrix Compare with Other Paintball Markers?

If you compare the Dye Assault Matrix with other intermediate markers, will it still be as good as it sounds here? Fortunately, it will. This marker has been around for years and it doesn’t fail to impress seasoned and professional players alike. Its mix of efficient, reliable, and aesthetic features make it pleasing to anyone who loves using their paintball guns.

However, compared to other models of the same caliber, the Dye Assault Matrix can be on the pricier end of the spectrum. Its retail price can be too much especially for price-sensitive players. Unfortunately, other brands offer the same reliability and consistency at a much affordable price.

Nonetheless, if price is not an important factor for you, then you will still find this paintball gun a great investment in your paintball career/hobby. It’s designed to last and you can always add modifications to it if you want to improve or tweak it. 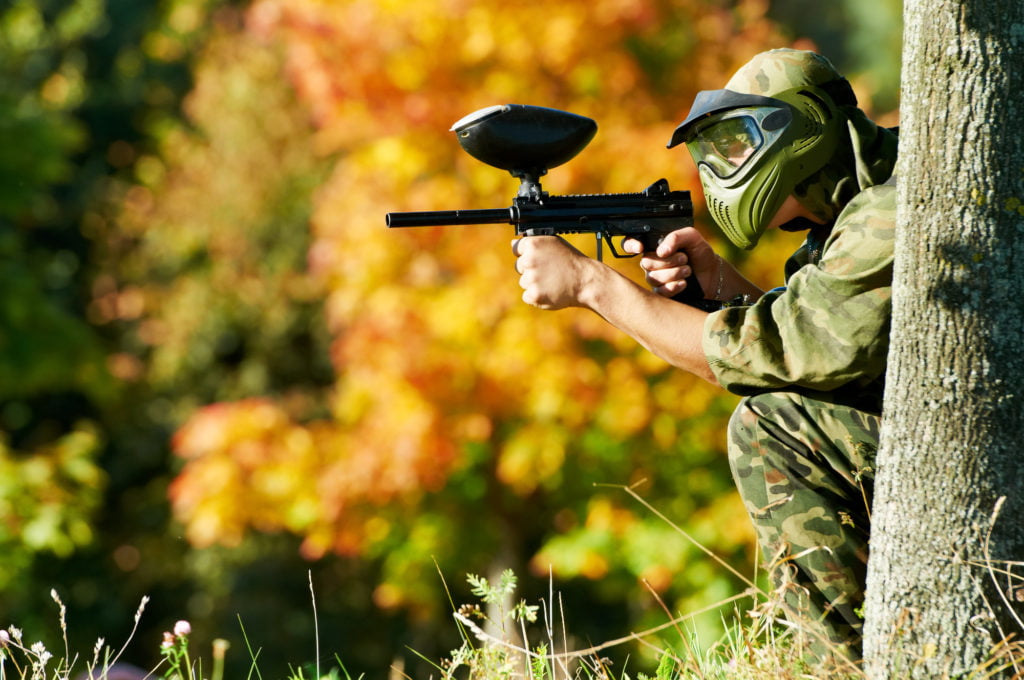 The Dye Assault Matrix is the perfect paintball gun for those who love woodsball paintball and are usually assigned the role of snipers. Its features were made to make the gun accurate and consistent especially when you’re firing over a long distance.

The Dye Assault Matrix may not be the paintball marker for everyone but it’s definitely a must-have when you become an intermediate player. Despite a high price tag, it’s worth it especially for those who regularly play paintball. Plus, it can easily be customized so you can expect to have this gun with you for a long time.

Ultimate Review of The Best Surfing Accessories in 2022

Ultimate Review of The Best Surf Brands in 2022

Ultimate Review of The Best BMX Shoes in 2022

How to Install a Bimini Top on Pontoon Boat