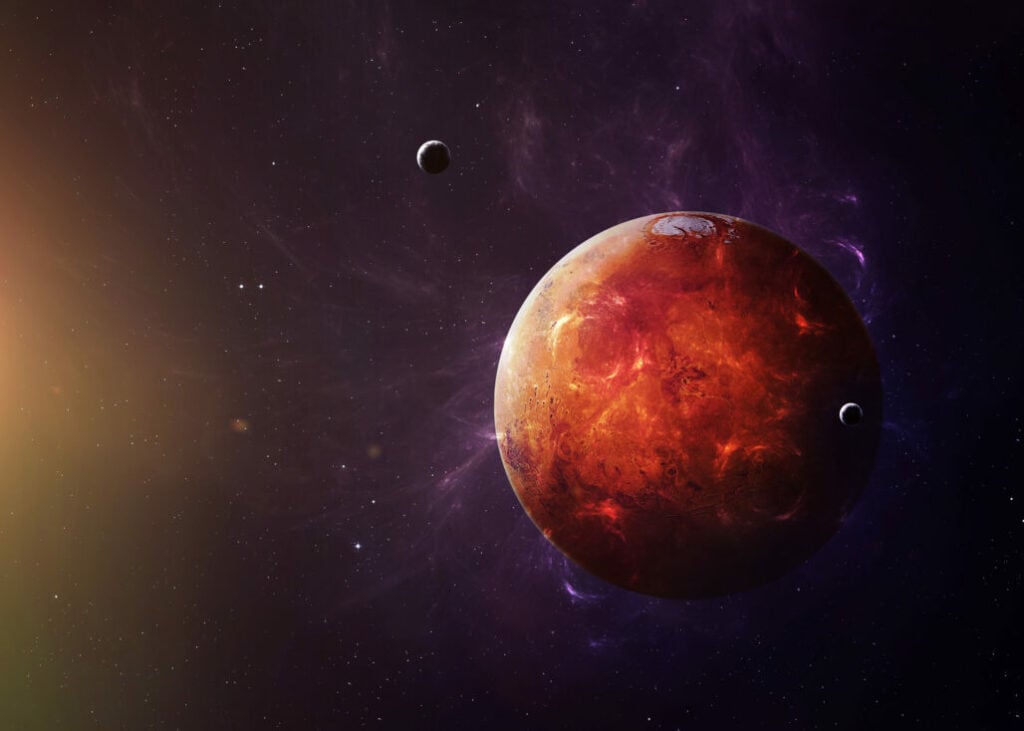 As we continue to move through the solar system, we next reach Mars. The fourth planet from the Sun is a dusty, cold, red desert. Mars is easy to spot in the night sky, it looks like a bright reddish orange star.

Mars is one of the most explored bodies in our solar system and the only planet we have sent rovers to so far. Due to Mar’s red color, the ancient Romans were inspired to name it after their god of war, as its color is evocative of blood.

A day on Mars is almost the same length as a day on Earth, 24.6 hours. A Martian day is called a sol. It takes 687 Earth days for Mars to orbit the Sun, or 669.9 sols. Another similarity to Earth is the tilt of Mars’ axis at 25 degrees from straight up and down, where Earth’s is 23.4 degrees.

This tilt gives Mars distinct seasons and its longer orbit around the Sun makes these seasons last longer than our seasons here on Earth. Mars’ orbit is more elliptical, and egg shaped than Earth’s orbit so the seasons on Mars vary in length whereas Earth’s seasons are evenly spread throughout our year. Spring in Mars’ northern hemisphere is 194 sols long and is its longest season. Mars’ shortest season is fall in the northern hemisphere at 142 sols.

Mars has two small moons, Deimos and Phobos. It is suspected that these moons may be asteroids captured by Mars’ gravity. Both moons are small and potato shape because they are too small to have enough mass and gravity to pull themselves into a spherical shape.

Phobos is the larger of the two moons and is covered in many deep craters. Phobos is slowly moving towards Mars and will eventually crash in about 50 million years. While Mars does not currently have any rings, when Phobos crashes into Mars, it will create a dusty ring surrounding the planet.

Deimos is half the size of Phobos and is two and a half times further from Mars. Deimos’s surface is covered in loose dirt that fills the craters making its surface appear smoother than Phobos.

Like Earth, Mars is a rocky terrestrial planet that has a central metal core. Mars’ core is made of iron, nickel, and sulfur. Surrounding this core is a rocky mantle and then a crust.

The Red Planet gets its rusty color from exactly that, rust. Mars’ surface has iron in its rocks, dust, and regolith (the name for soil on Mars). This iron on the surface rusts due to the exposure just as metal rusts when left outdoors.

While Mars is smaller than Earth it has very large features covering its surface. There is a large canyon system named Valles Marineris that is more than 3,000 miles (4,800 km) long, long enough to stretch the width of the United States.

The Valles Marineris is 200 miles (320 km) at its widest and is 4.3 miles (7 km) at its deepest, making this canyon 10 times larger than the Earth’s Grand Canyon. Olympus Mons is the largest volcano in the solar system is found on Mars. Olympus Mons is three times taller than Mt. Everest.

Mars’ surface shows the scars of a watery past in its ancient, dried river valleys and lakebeds. There are also rocks and minerals found on the surface that could only have been formed in liquid water. Water can still be found on Mars today in the form of water ice just below the surface near Mars’ north and south poles.

From the ancients to modern astronomers, humans have studied Mars more than any other planet, except Earth. Both orbiting in space and on the surface, Mars has a fleet of spacecraft exploring the planet.

See also
Worlds Beyond Our Solar System – An Introduction