Garrett ATX Review: Is It Worth Your Money?

What’s the best all-terrain and user-friendly Garrett metal detector? If you’ve been searching through Garrett’s product line, you know that there’s a lot of choices for different types of treasure hunters. There’s one for saltwater, for gold, for beginners, etc. But what if you’re not a beginner and you want the best model Garrett has ever made? This is where you’ll find the Garrett ATX to be the perfect match.

The Garrett ATX is part of the all-terrain line and pulse induction line of metal detectors by Garrett. It has the features of an all-terrain detector which means that it’s built for the outdoors and not just your backyard. Just by looking at its design, you know that it’s for heavy-duty use. It even looks like something straight out of the military with its camouflage color.

As for the technology, the Garrett ATX gears away from the usual VLF technology found in most detectors. Instead, it uses pulse induction (PI) with a frequency of 19kHz. This is pretty high for a metal detector which is why it’s one of the most reliable versions in the market. Because it transmits 730-millisecond pulses one after the other, it has a higher chance of detecting all types of metals found under the ground.

The Garrett ATX is known for being a robust detector that is best used by experienced treasure hunters. Unfortunately, it’s not for dive hunters, but it is waterproof up to 10 feet. If you plan on searching in rivers and shores, then the ATX has enough features for you to find what you’re looking for. 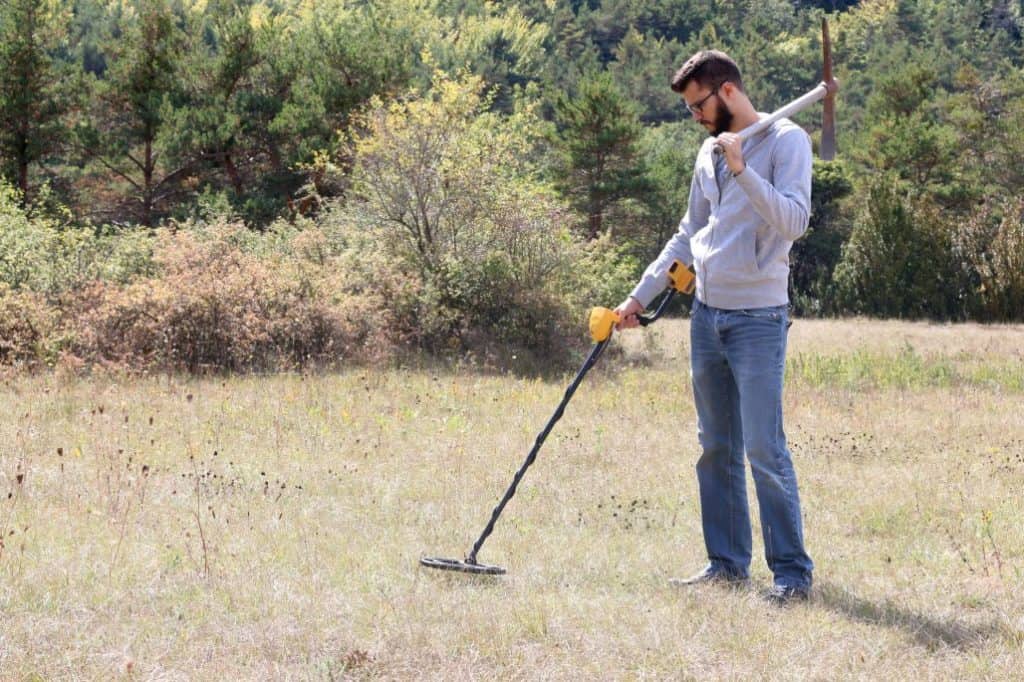 Here is an in-depth look at what the Garrett ATX has to offer.

The Garrett ATX uses pulse induction technology which means that it uses only one wire to act as a transmitter and a receiver. PI technology is ideal for a metal detector like the ATX because it increases detection depth. In other words, the Garrett ATX is sure to capture all kinds of metal even if they’re buried deep in the ground.

The beauty of having PI technology in your metal detector is that it offers enhanced depth detection for metals both small and large. The Garrett ATX was built with that goal in mind which is why it’s one of the best detectors out there.

The Garrett ATX is not just for detecting silver and tin; it can also detect gold nuggets without any problem. If you want to increase the area it inspects, then you can replace the search coil with a bigger one from Garrett. You’ve read that right – you can change the search coils in the ATX so everything’s customizable at this point.

What does a high-frequency metal detector mean? When it comes to the ATX, the 19kHz frequency means that it can detect metals excellently regardless of the mineralization in the soil. This makes a lot of sense because the ATX was built for different kinds of terrain and it lives up to the name by being able to detect gold nuggets in mineralized areas.

On top of the high-frequency feature, the ATX allows you to allow automatic frequency calibration. This will adjust the frequency wherever you are so that the detector gets the least signal interference.

You won’t expect a PI-run metal detector to have ground balance, but the Garrett ATX does. The ground balance for the ATX works by helping you identify which sound is for the target and which is just plain noise caused by the mineralization in the soil. How do you turn it on? You simply press the GND BAL button on the right side of the control panel.

To match the 25 levels of iron discrimination is the 25 different audio settings. There are around 25 different audio tones that will help you distinguish different targets. You can also adjust the sounds so that you can easily recognize the specific metals that you are looking for. The audio’s volume will also give you an idea if the target is deep in the ground or just a few inches underneath.

Where’s the LED display? If you’ve seen the Garrett ATX, then you’re probably asking this question, too. The LED doesn’t come as a screen. Instead, it’s the small lights that change whenever your metal detector receives signals from different types of metals. The numbers on the control box show 1-13 which describes the discrimination setting the metal is in.

To cap it all off, the Garrett ATX has a compact and collapsible design. The shaft can be shortened to 20 inches and can be lengthened to its maximum length of 68 inches. If you don’t need a long metal detector, then you can just adjust the shaft. You won’t be able to see another metal detector just like this.

And if that’s not enough, the whole device can fit in a soft-padded square case. How is that possible? The credit goes to how the ATX was designed – with each part being foldable and collapsible. Even the search coil itself can be tilted to be more compact with the control box. 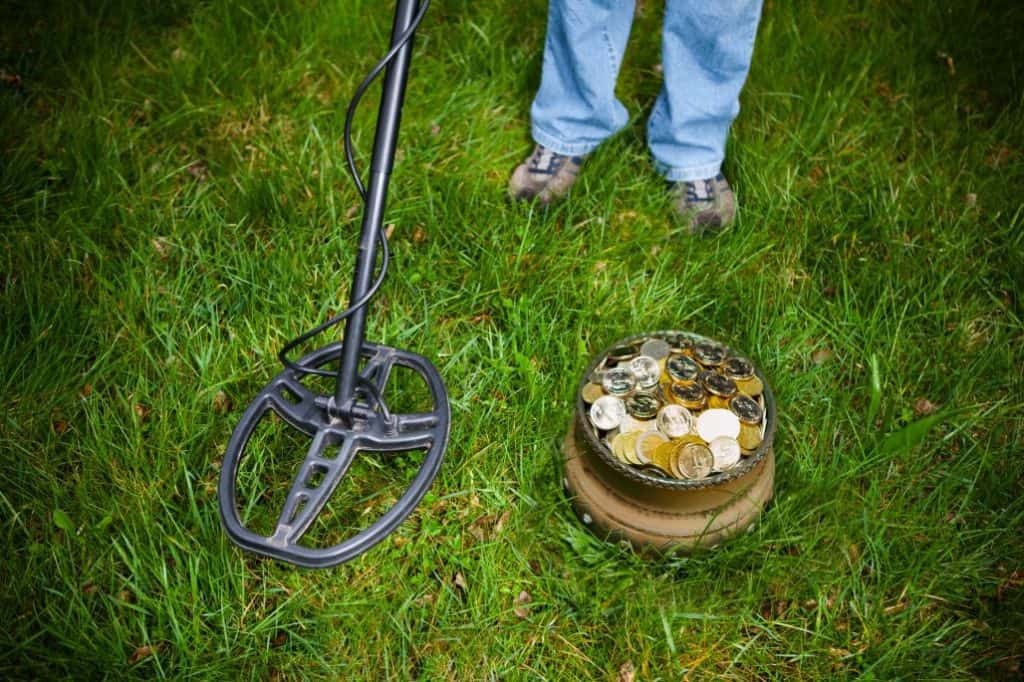 Taken from its name, the ATX is an all-terrain metal detector that is fit for the great outdoors. Whether you plan on searching on top of mineralized soil or in rivers and creeks, the Garrett ATX can withstand it all. To prove that it’s made for heavy-duty adventures, it is coated with thick plastic material encasing the batteries and the speakers. You won’t even find any loose wire outside.

Another advantage you get when you buy the Garrett ATX is its waterproof feature. The ATX is waterproof up to 10 feet which is just the right depth if you plan to go treasure hunting in the river. Of course, it’s no match for metal detectors that are meant for underwater expeditions, but the ATX is the best of its kind when it comes to durability in saltwater surfaces.

Is the Garrett ATX as accurate as it is portrayed to be? There’s no doubt about that. With 25 iron discrimination levels and high-frequency capabilities, it’s almost impossible to miss any metal underground. It was built with an all-metal mode which means that it detects every material that has metallic properties. If you want to make it more accurate for the high-value metals, then you can make use of the 25 discrimination levels for an easier search.

Did you know that almost every part of the ATX is adjustable? Starting from the search coil, you can twist it to the angle of your choice. So if you are trying to detect minerals on the wall or in towering rocks and piles of soil, then adjusting the coil angle to either 90 or 180-degrees will help you search with ease. Just at the bottom of the shaft, you’ll see a lock so you can snap the angle in place.

Next is the shaft itself. If you’ve seen promotional videos of the Garrett ATX, then you’ve seen it collapse to a handheld device. The shaft’s length can be adjusted to its max (68 inches) or minimum length (20 inches). When it is fully folded, it looks a lot like a tennis racket.

Lastly, it’s compact. The whole thing can be taken apart and folded which makes it easy to transport to and from your car.

The Garrett ATX’s display doesn’t have a screen, but that’s okay. It was designed to be small and compact so that you can control it with the same hand that holds the whole metal detector. Think of it as operating a remote control that is square-like in design. So far, it’s the only metal detector of Garrett that can be used by one hand.

Has a 2-year limited warranty

Worried that there may be defective parts? Don’t worry because the Garrett ATX has a 2-year limited warranty. All you have to do is contact customer service and give the serial number of the metal detector for verification. When that’s done, you can avail of the warranty for your defective device.

Cons - What We Are Not Huge fans Of! 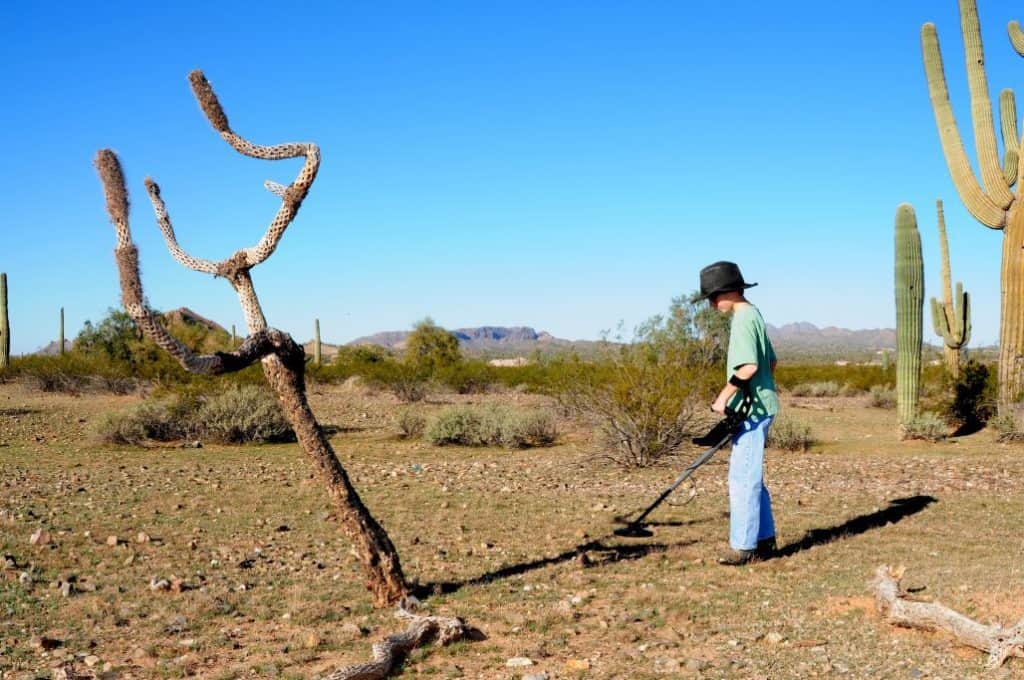 Sadly, the whole package is not waterproof. Don’t worry, though, because this is a common disadvantage in all-terrain metal detectors from Garrett. The MS-2 headphones that come with the ATX are in no way waterproof and it’s prone to a lot of damage when it gets wet. If you plan on going to the shore or the river, then it’s best to get yourself a set of fully waterproof headphones.

On the higher price point

You’ve probably heard that Garrett sells affordable metal detectors. You might have even ended up searching the ATX because you thought that it was affordable. Unfortunately, that is not the case for the Garrett ATX. The ATX has a hefty price tag which is why it’s not recommended for beginners and for those who will not regularly use the device.

Despite the soft bag and the shoulder strap that comes with the whole ATX package, the thing can be a challenge to lug around. It weighs 14.6 lbs so it is not something a lot of people would want to carry unless they’re absolutely sure they can comfortably handle it when they walk around. It’s a good thing that it’s portable and collapsible, so it makes up for the heaviness of the whole item.

Who is the Garrett ATX For? 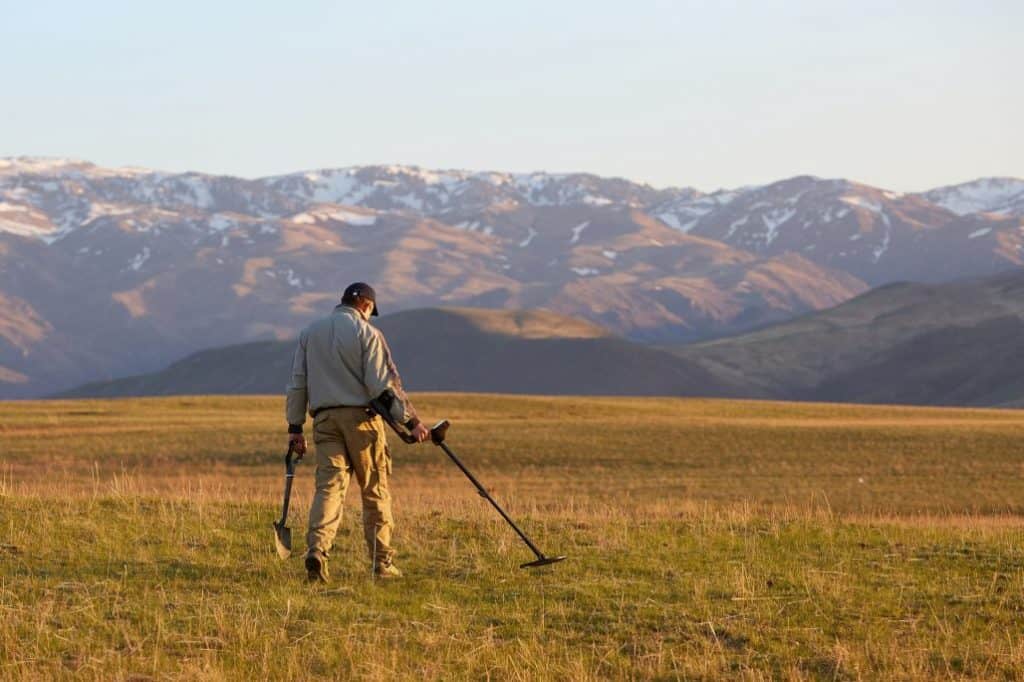 Is this compatible for beginners or is it just for experienced treasure hunters? Unfortunately, the Garrett ATX is best for those who already have experience in treasure hunting. If you’re a beginner, the high price tag should be a sign telling you not to invest in it yet unless you’re absolutely sure that looking for metals underground is something you love doing.

On the other hand, if you are an experienced hunter and you want to cover different types of surfaces, then the ATX is the perfect fit for you. Of course, this assumes that you’re not price-sensitive. Moreover, the Garrett ATX is not light. It’s very heavy so you also have to be used to carrying heavy loads before it becomes recommended for you.

What about if you plan on looking for gold? Admittedly, there is another metal detector by Garrett that is made for gold-hunting. It’s the Garrett AT Gold. However, that doesn’t mean that the ATX is no good. In reality, both are comparable when it comes to their accuracy in looking for small gold nuggets.

In summary, the Garrett ATX is built for adventure. From the design to the mechanical aspects, it’s clear that it’s for experienced treasure hunters that love to look in the desert, mountains, waters, and on the shore. For obvious reasons, it’s not for beginners or those who just want to try looking for metals underground.

It may be a little pricey and it doesn’t have waterproof headphones, but other than that, the whole package is the best in its class. Complete with features that will give accurate sounds to different metals, there isn’t a metal that you’ll miss out there.

The Ultimate Magnet Fishing Guide: Everything You Need to Know

Ultimate Review of the Best Metal Detectors for Beachcombing in 2022

Ultimate Review of The Best Underwater Metal Detectors in 2022

Ultimate Review of The Best Beach Sand Scoops in 2022

Ultimate Review of The Best Metal Detectors For Coins in 2022