What Are Chimineas? (And Why Are we all Over them!) 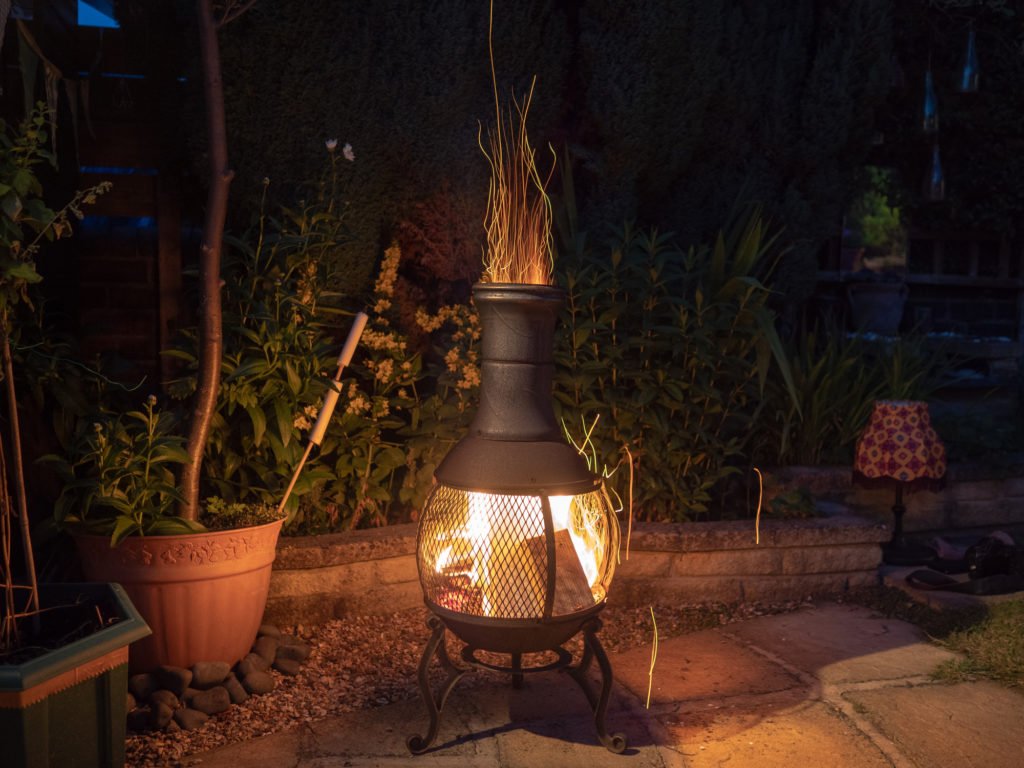 It is fun to sit around a cozy warm fire with your family and friends at the end of the day. To tell some ghost stories and sing campfire songs while cooking hot dogs and baked potatoes.

Thankfully, chimineas, also known as “Chimeneas” have come a long way to help enjoy such outdoor moments, inducing your relaxation and social experience to the next level.

Whether it’s in the great outdoors while camping or on your deck when hosting a backyard fire-pit party, chimineas can be an excellent way to provide an attractive gathering spot. They have been around for a whole long time and today, they’re not just decorative accents pieces.

They have become increasingly popular as a means of outdoor heating- although some people tend to use them as garden art on patios probably for an authentic rustic look.

Most people, however, don’t seem to understand what these fire features actually are.

So, What Are Chimineas? 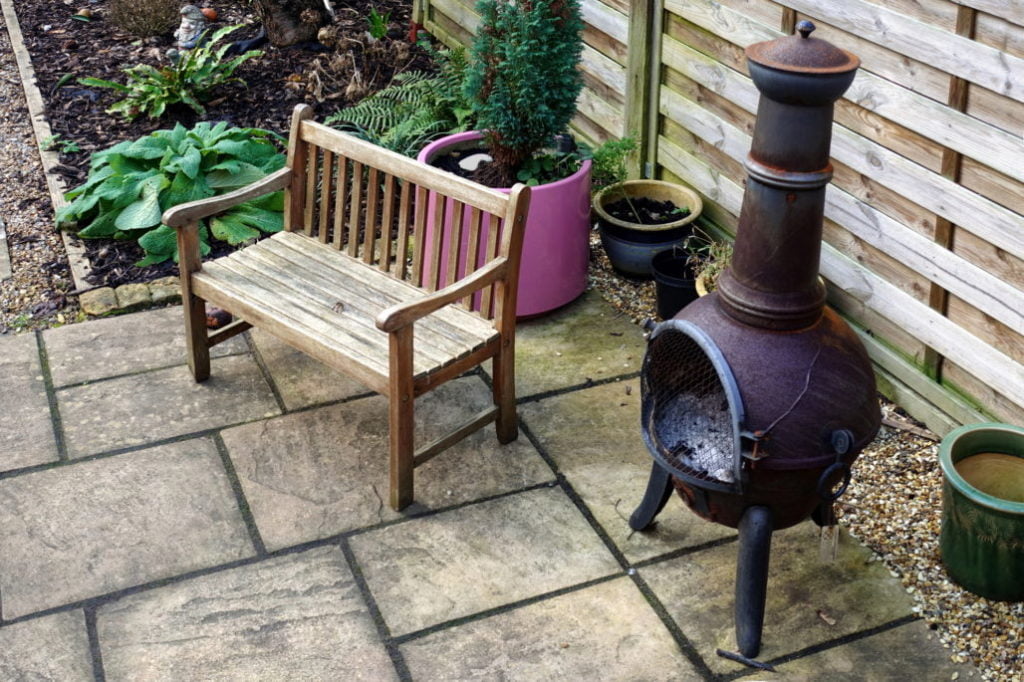 Put simply, chimineas refers to those front-loading form of metal stoves you see at patio stores and marketplaces. As the name suggests, these functional fireplaces are often characterized by a potbelly shape and a thin vertical chimney through which they direct the smoke.

Chimineas are also known for their durability and superior heat retention. They can project heat across quite a wide distance to keep your patio warm all night and still be able to relight its content the following day. Plus they have been around for a while.

Although some are made of cast aluminum and cast iron, most chimineas you’ll come across are normally built using terracotta clay. They are commercially available at home improvement centers and garden stores, either in plain terracotta or garnished with colorful ceramic motifs.

Chimineas originated in Mexico a couple of hundred years ago and perhaps that’s why they’re often adorned with Mexican-inspired traits.

Traditional chimineas are constructed using clay. They come with a wide base pottery design. They also feature a narrow vertical front chimney to direct smoke and a broad opening on the side that serves as the chiminea fire pit.

However, with the increased popularity of outdoor fire pits, chimineas are now available in different materials including steel, cast iron, and cast aluminum. Among these, terracotta is considered the most prone to damage, but on the bright side, it gives off a classic Mexican look.

The shape and design make it ideal for use in rainy weather without water interfering with the frame. Technically speaking, chimineas are the same concept as a conventional potbelly stove which is pretty much comparable to a cast-iron wood-burning stove.

They may have little to no exterior decorations or have painted raised details. You might also find an open-mesh style chiminea, depending on the material used in construction.

Metal chimineas, as you could have guessed are more resistant to damage- even though cast iron chimineas are quite heavy. Unlike fire pits, chimineas are basically contained.

Skeeter logs and scented woods like pinon, mesquite, cedar, and hickory are ideal choices for chimineas because they blow the smoke right up and out.

Once ignited, chimineas can attain full burn in about 15 minutes, delivering a great deal of heat. Plus, you can control the fire just like any wood-burning outdoor fireplace. 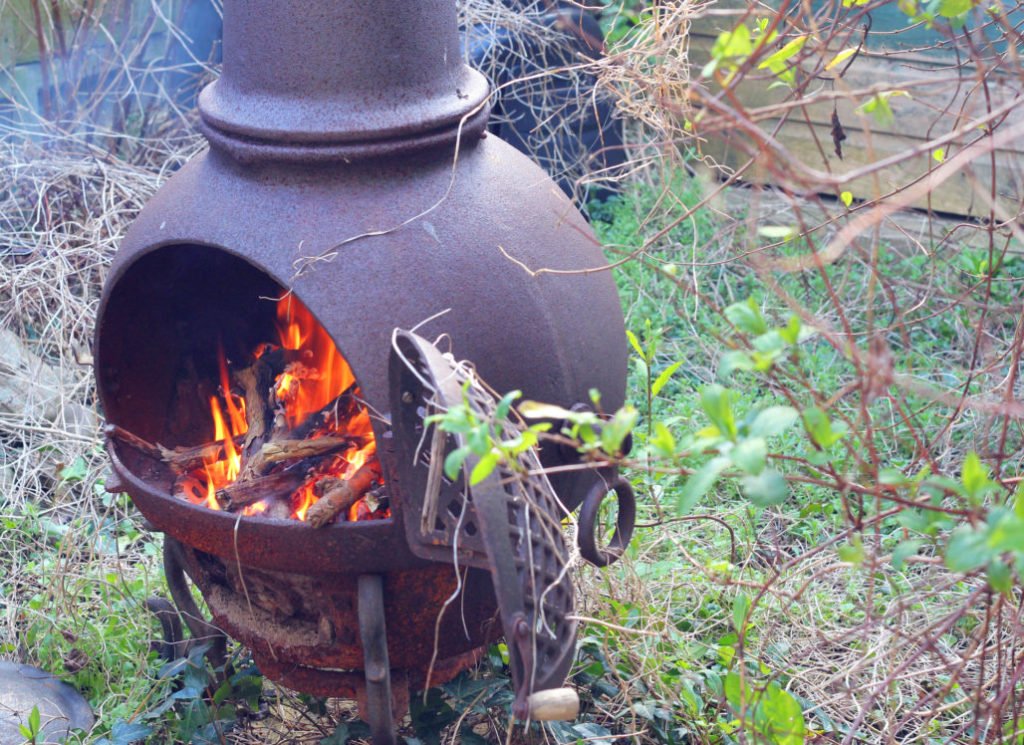 Cooler weather doesn’t mean you have to give up on your backyard gathering spot. Whether it’s clay or cast iron chiminea, check out the tips below on how you can maintain your chiminea and add a little warmth and flair to your patio.

First, chimineas can be fragile, and no matter how careful you’re, they are prone to cracks and ruptures. To make sure your chiminea stands the test of time and serves as expected, proper maintenance is imperative.

You might want to purchase a cover to protect the item from rain and snow and even the blistering sun. Also, check that the bottom of the chiminea has at least three inches of sand clearance to prevent it from cracking.

Terracotta clay chimineas are particularly susceptible to cracking when they’re not properly heated. Here are a few important aspects of their maintenance:

Some sources suggest enhancing the outside of a chiminea with acrylic waterproofing products. This is because clay naturally soaks water, and in case the chiminea is ignited while there’s still moisture in the clay, the item could end up cracking.

Chimineas should be cured and broken in slowly, with or without the acrylic cover. Keep the first few fires small, and then gradually adjust to a bigger fire.

After four or five small fires, your chiminea should be ready to give off heat from fires appropriate to the size of the chiminea. In any case, flames should never shoot out of the chiminea’s front or chimney.

Meanwhile, metal or cast iron chimineas can be treated using rust-proofing agents and keeping them out of the rain and humid conditions.

If you’re planning to use a clay chiminea in cold chilly environments, remember to start the fire slowly and avoid a sudden increase in temperature as this could cause it to crack. During the winter months, it’s recommended to cover it or relocate it to a shed.

How Safe Are Chimineas? 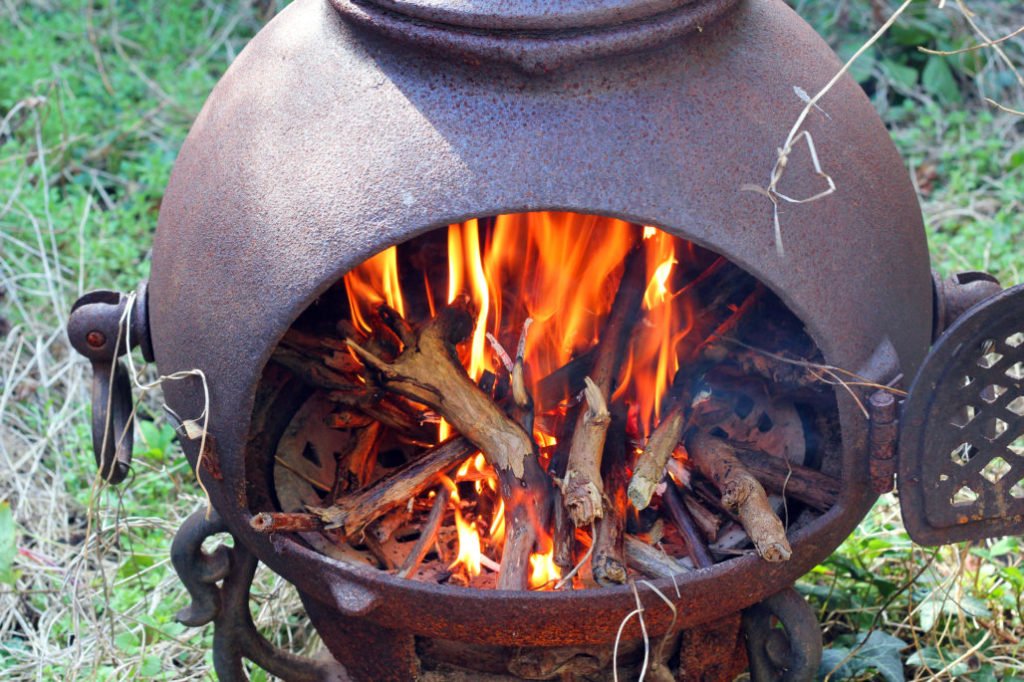 Installing and maintaining a wood burning stove may sound a bit involving at first, but chimineas are actually easy and safe to use than fire pits. They don’t often throw sparks or embers and after ignition, chimineas retain heat for more than 12 hours.

However, keep in mind that these are still hot stoves. You don’t want to touch the outside of a lit chiminea. Keep children away from it and let the fires burn out completely before starting to clean the chiminea.

Note that on a raised stand, a chiminea can possibly ignite the grass below it, in case there’s any. For safety reasons, it is recommended to place the chiminea in a place where the flames are visible from a distance such as a courtyard, deck, and patio.

Chimineas should be strategically located such that the predominant wind carries the smoke away from the place. For the chimney to work effectively, the chiminea itself should be set up straight and vertical. This placement helps to ensure the soot is contained inside the fire chamber.

Inspect the surface upon which the chiminea will be located. Brick, stone, or concrete patios are considered the best fire-safe paving choices for a much more controlled burn.

In the case of a wood deck or terrace outdoor space, fire-safe pavers should be placed across a small area to act as a platform or patio fireplace. The chiminea should be placed on a flat solid level base far from other patio furniture and make sure there isn’t any danger of toppling over.

The place should be free from eaves or any type of overhead cover that could catch fire. Note that on a raised stand, a chiminea can possibly ignite the grass below it and cause fire too.

How to Safely Light a Chiminea 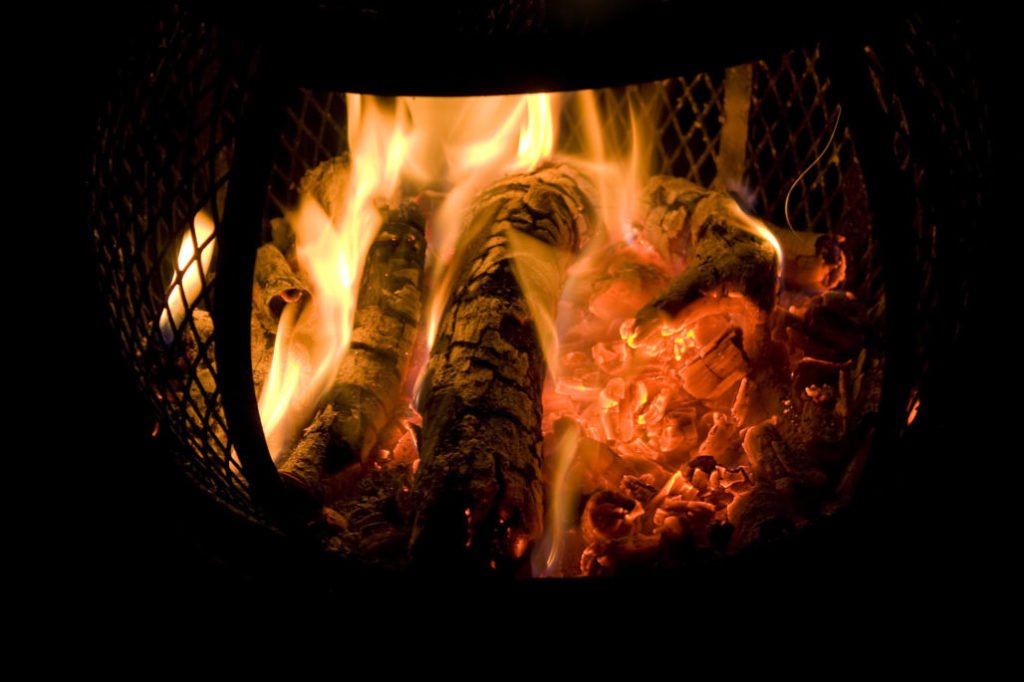 To safely ignite a chiminea, place some bits of dried softwood in the center of the base and put small bundles of newspaper between a firelighter and the wood.

Then simply light the paper in different locations. You might want to put an additional pyramid of kindling around the fire to help keep it burning.

In any case, accelerants like petrol should never be used as they can be dangerous. If you’d like a more environmentally approach, there are some natural firelighters that are specially designed for use with a natural type of flammable resin. These ones can help you light the chiminea more easily.

Note that the point here is not to cover the fire with too many pieces of wood. At first, the fire will smoke a little, especially if it’s facing the prevailing wind, but it should subside after an hour enabling you to add larger pieces of prepared wood.

Always start by building up a small fire by using small kindling to fairly smaller logs before you start adding larger pieces.

Things to Consider When Buying a Chiminea 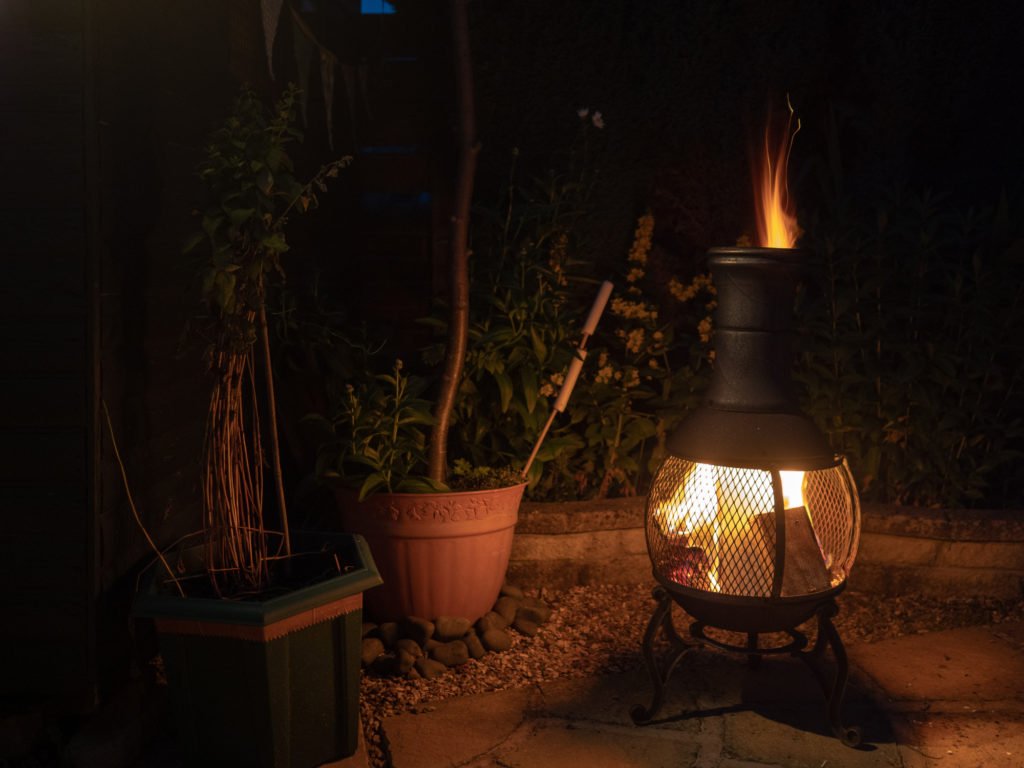 When deciding which chiminea is right for you, there are several things you need to keep in mind to make sure you’re getting the best deal. You don’t want to be carried away by those bubbly painted flowers and motifs decorating that chiminea you saw online.

You need to consider where it will be installed on your property, the size, shape as well as the materials used in the construction:

The aim is to get something that’s appealing to you. Check whether it fits well in your existing décor and your patio layout. Is it crooked or twisted? Is the chiminea too thick or thin? Overall shape and design are major considerations.

Note that chimineas are available in many varieties, from traditional rustic designs to modern aesthetics and others that come with a more neutral appeal that’s easier to integrate with any décor.

What are the local bylaws? Does your area support wood burning fireplaces, both outdoors and indoors? If not, and you really want to invest in a chiminea, there are plenty of options you can count on that run-on gas or liquid propane.

Do you have enough space in your fire pit to accommodate seasoned pieces of wood? Things would be much easier if they can. However, if not you will have to either order smaller sizes pieces of wood or go ahead and do the chop the wood up by yourself.

While traditional chimineas are made of clay and terracotta, modern designs can be made of copper, steel, cast iron, or cast aluminum. Remember to check whether the item arrived in good form. Look out for any dents or cracks in the chamber.

Is the funnel crooked or does the chimney appear to be too thick/thin in comparison to the rest of the body? You might want to refer to the user manuals and product pictures for specifics on these aspects. 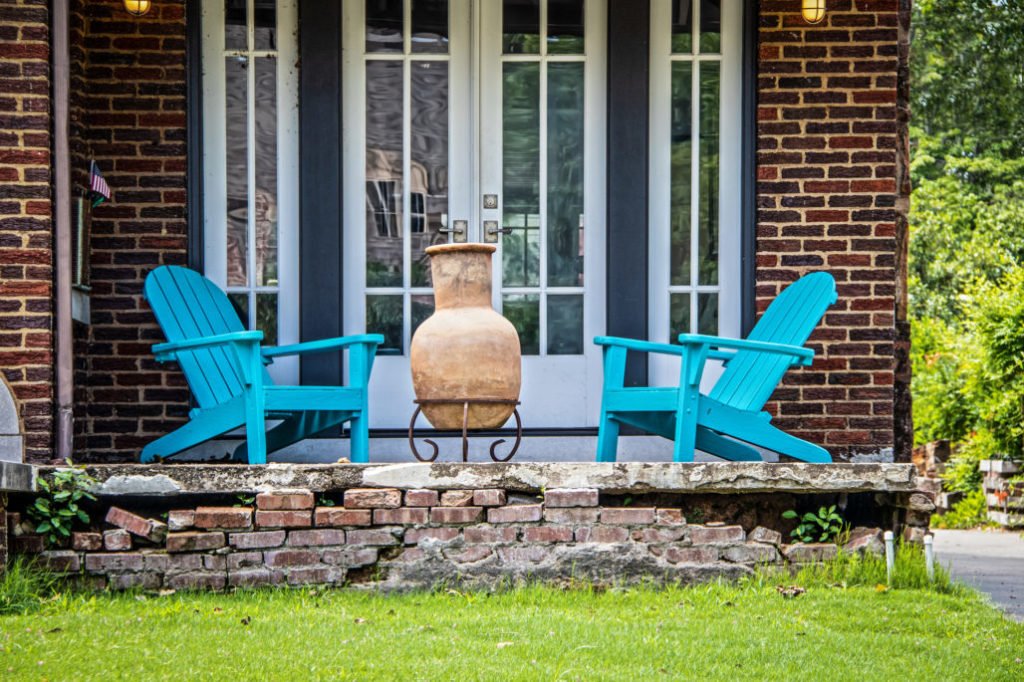 All things considered, chimineas are safe and relatively easy to use. Whether you want one for an occasional backyard gathering or just as an enchanting piece in your garden or patio, chimineas can be a great way to bring warmth and a little flair to almost any setting.

However, make sure you’re careful when handling it. For instance, it’s best to start with small and manageable fires. Keep your chiminea indoors during rainy or harsh weather conditions so you don’t end up compromising its integrity.

In case of any cracks, you can consider getting a replacement or working on the repairs. Just keep in mind that you can only fix chiminea damages when they’re minor. Otherwise, with proper care and maintenance, your chiminea can last a long time.

How to make your own Jungle gym ( And Break a Sweat!)

How to Remove Gazebo Hard and Soft top

What is Bluestone – Would You Know?

How to Install Hot tub in your Backyard

How to Winterize a Chiminea? – A Quick Guide