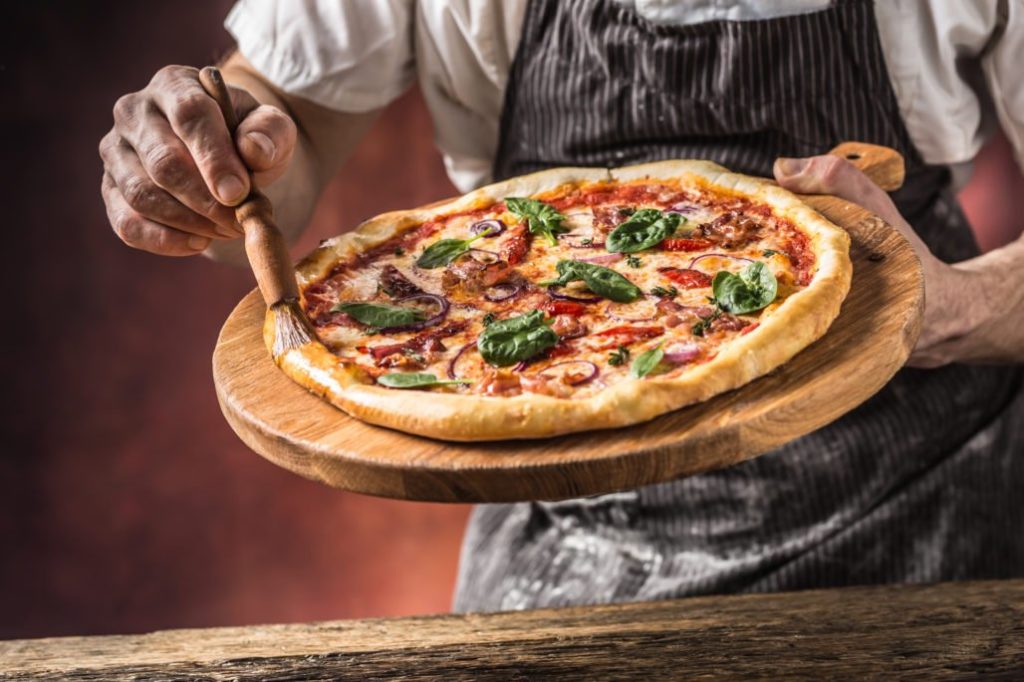 “When the moon hits your eye like a big pizza pie, that’s amore”, sang Dean Martin in the 1953 movie The Caddy. This hit song, an homage to Neapolitan folk music, depicts Italy (and Naples) as a land of romance, magic, and, above all, heartwarming food. When Dean Martin’s That’s Amore topped the charts, pizza had already become one of the most popular food options in the United States. A few years later, in 1957, the first frozen pizzas were distributed in grocery stores and quickly became a permanent fixture in American kitchens.

Tough the tasty flatbread topped with tomatoes, mozzarella, and numerous other ingredients has its origins in Italy, pizza has become a global phenomenon. According to the National Association of Pizza Operators, three billion pizzas are sold each year in the United States alone. People enjoy eating pizza at home, in pizzerias, and even on their way to work. However, for a long time, pizza was ignored and denigrated by food writers for its humble origins. 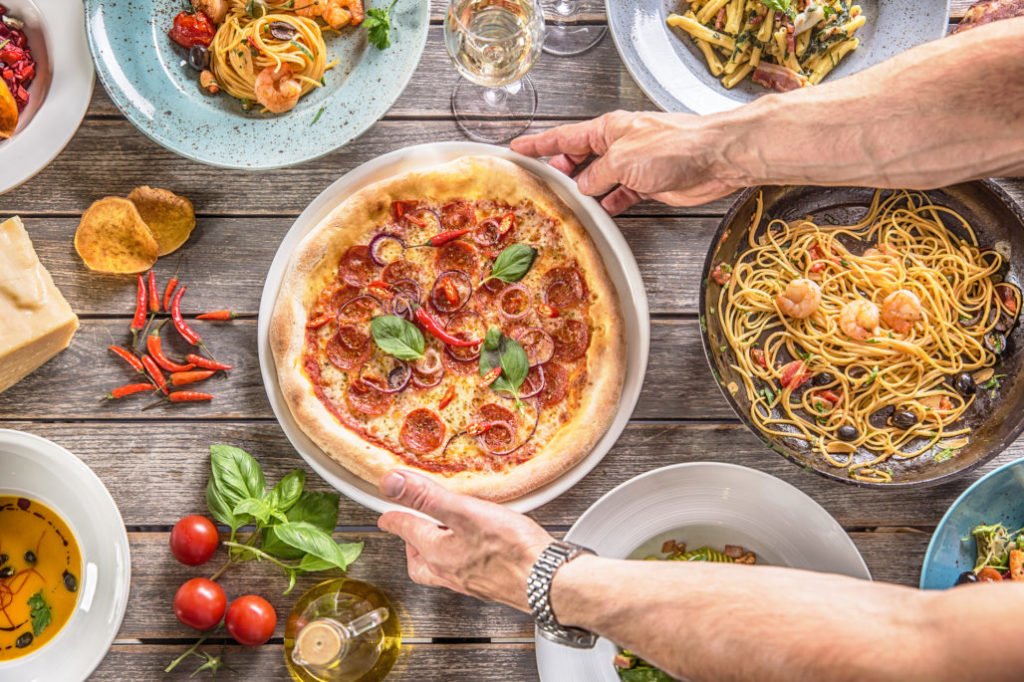 The word pizza was first recorded in a 997 A.D. Latin manuscript found in the Southern Italian town of Gaeta in Lazio. The document states that a certain tenant is supposed to give the Bishop of the town duodecim pizze, Latin for twelve pizzas, every Christmas Day. Records of pizza prototypes can be found even earlier throughout ancient history. For example, scholars believe that the Etruscans, members of a civilization developed during the Iron Age in central Italy, and the Greeks, were among the earliest societies to produce grain-based flatbreads. These antecedents of modern pizza were usually baked on hot stones and seasoned with oil and various herbs. In the 6th century B.C., soldiers of the Persian army led by King Darius I “the Great” used to bake flatbread topped with cheese and dates on their heated shields.

A reference to these ancient flatbreads can also be found in the Aeneid, an epic poem written by Virgil in the 1st century B.C. that became the founding myth of Ancient Rome. In Book VII, Aeneas and its Trojan crew land in Latium, the modern Lazio region in Italy. Hungry, they bake flatbreads and top them with “wilding fruits.” However, this meager meal is not enough to quell their hunger and “soon,” writes Virgil, “all things else devoured, their hunger turned to taste the scanty bread, which they attacked with tooth and nail audacious.” To lighten the mood, Aeneas’ son Ascanius, or Julus, jokes: “Look! We’ve even eaten our plates!”, Heus! etiam mensas consumimus! This seemingly unimportant joke soon becomes the fulfillment of a prophecy made by the Harpy Queen Celano, who foretold that the Trojans would not find the place where they were destined to build an illustrious city (the future Rome) until they were forced to eat their tables.

The flatbread that the hungry Trojans devour in the Aeneid, however, bear almost no resemblance to the pizzas topped with tomatoes, cheese, and many other ingredients that people enjoy eating today. 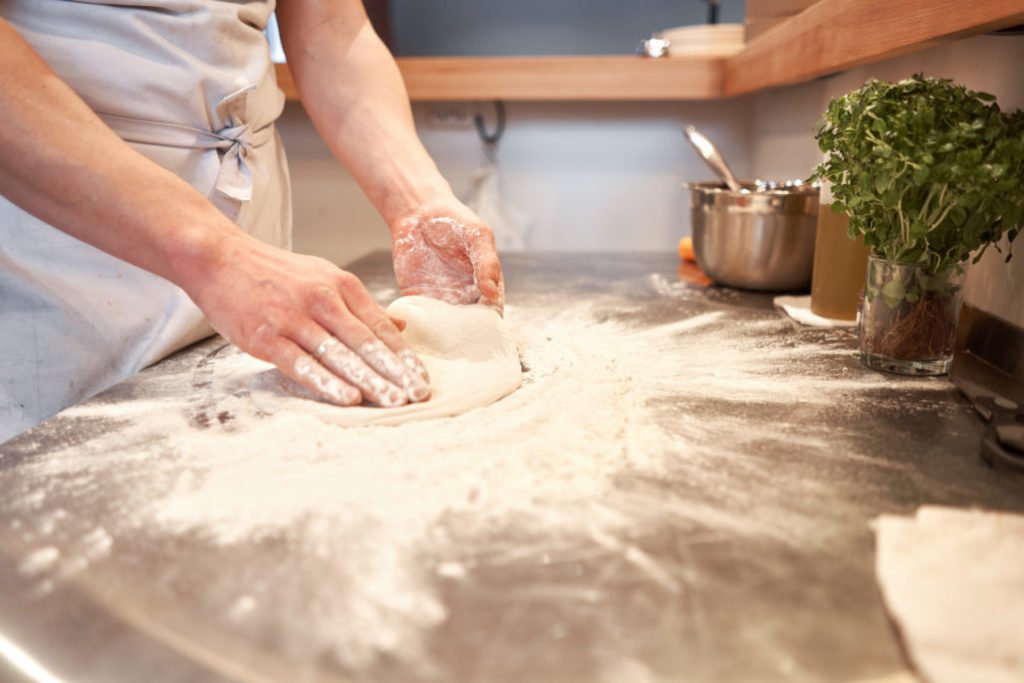 The Origins of Pizza

Though the are many legends surrounding the origins of this tasty dish, it is widely accepted that modern pizza was invented in Naples in the 18th century. At the time, Naples was one of the largest cities in Europe, and its urban economy struggled to keep up with the city’s fast growth in population. As a result, many Neapolitans fell into extreme poverty. The poorest members of the lower class were called lazzaroni because their appearance resembled that of the beggar Lazarus.

Often depicted as “street people” and “beggars”, the lazzaroni needed cheap food. Tasty flatbreads topped with easy-to-find ingredients sold by street vendors met their needs. They soon became the most popular food option among Naples’ poorest. These early pizzas were often topped with cheese, oil, garlic, anchovies, and tomatoes. In the 18th century, tomatoes, the mainstay of modern pizza, were mistakenly believed to be poisoned. Scorned by wealthy aristocrats, they were sold at low prices at the market and became very popular among the lower classes.

“The lazzarone,” wrote Alexander Dumas “[…] eats but two things: the pizza and the cocomero or watermelon.” Dumas, who visited Naples in 1835, recorded his experience in a journal titled LeCorricolo (French for wagon) where he included a description of the early Neapolitan pizza: “the pizza is a sort of bun; it is round, and made of the same dough as bread. […] At first sight, the pizza appears to be a simple dish, upon examination it proves to be compound. The pizza is prepared with bacon, with lard, with cheese, with tomatoes, with fish. It is the gastronomic thermometer of the market.”

Associated with abject poverty, pizzas were often considered “disgusting” by Italians and foreign visitors alike. For example, in 1831, Samuel Morse, the inventor of the telegraph, described pizza as “a species of the most nauseating looking cake […] it altogether looks like a piece of bread that had been taken out of the sewer.” Similarly, Carlo Collodi, the author of “The Adventures of Pinocchio,” in his 1880 Viaggio per l’Italia di Giannettino (Giannettino’s travel around Italy), stated that the toppings gave pizzas “the appearance of complicated filth.” 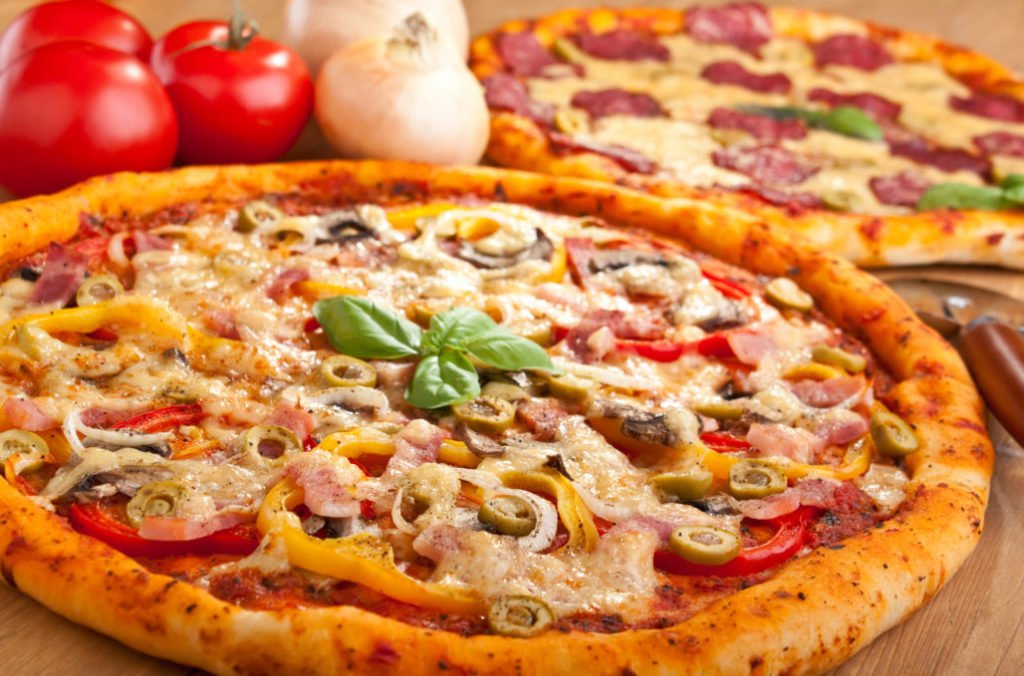 Pizza Margherita. A Dish Fit For A Queen

At the end of the 19th century, pizza started to slowly gain popularity beyond Naples. In 1889, King Umberto I and Queen Margherita of Savoy visited the former capital of the Kingdom of the Two Sicilies. They aimed to ingratiate themselves with the southern subjects still wary of the newly formed Kingdom of Italy and its ruling house.

Legend has it that during their stay at Capodimonte Palace, Queen Margherita became bored with the French gourmet food she ate every day. Craving local food, she asked Raffaele Esposito, the most famous pizzaiolo (pizza-maker) in Naples, to bake three different kinds of pizza. According to the legend, the Italian Queen fell in love with the pizza topped with ingredients whose colors matched the new Italian flag: basil (green), mozzarella (white), and tomatoes (red). To honor her, Esposito decided to name the pizza Margherita. The pizzaiolo later received a thank-you note from Queen Margherita. The letter with the royal seal still hangs on the wall of the Pizzeria Brandi, now owned by Raffaele’s descendants.

Though it is commonly accepted that pizza Margherita was named after the Italian Queen, Zachary Nowak, the assistant director of Food Studies at the Umbra Institute in Perugia, questioned this popular theory: “The chromatic coincidence has always seemed too convenient for me,” wrote Nowak in a 2012 article published on BBC Food. “[…] The queen’s pizza takeaway shows the Italian monarchy’s acceptance of the south and its traditions, and the tricolour pizza is the south’s final acceptance of unification. Sounds like a fable.” According to him, the royal thank-you letter sent to Esposito is a fake forged by his descendants as a publicity ploy to promote their struggling pizzeria.

Queen Margherita’s appreciation transformed the humble pizza into a dish fit for aristocrats. However, pizza spread slowly throughout the new Italian Kingdom. It also continued to remain associated with the Neapolitan lower class for a long time after 1889. In the aftermath of World War II, for example, many citizens of Naples were so poor that they could only afford to buy the deep-fried pizzas sold by street vendors on credit. This practice, called oggi a otto (eight days from today), allowed them to pay for their pizza eight days later. 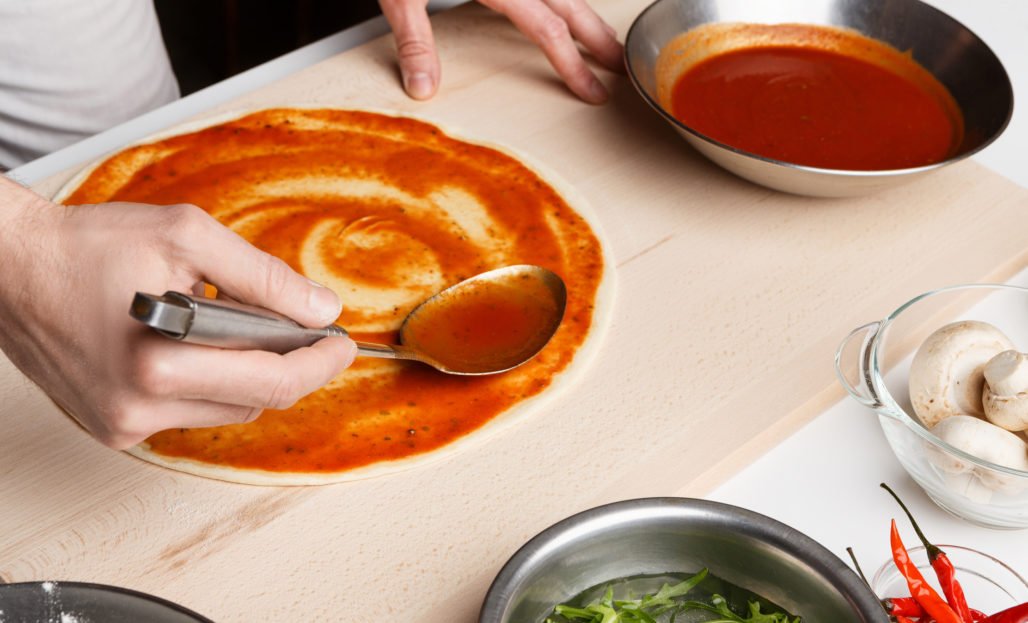 “There’s no better feeling in the world than a warm pizza box in your lap.” Pizza Arrives in the United States

Pizza arrived in the United States in the late 19th century, bought by Southern Italian immigrants who left their home country to find jobs in the big American factories. However, some of them made use of their pizza-making skills and started to sell pizza in the streets of Little Italys. In 1905, Gennaro Lombardi’s in Manhattan became the first licensed pizzeria. Soon, the aroma of pizza began to waft through many American cities, attracting Neapolitan immigrants and non-Neapolitans alike.

Though pizza started to gain popularity outside immigrant communities in the early 20th century, it was after World War II that this food was assimilated into mainstream cuisine and culture. American soldiers stationed in Campania during the war became acquainted with pizza and the local cuisine. When they returned to the United States, they played a major role in spreading their enthusiasm for pizza across the country and the rest of the world. “Like blue jeans and rock and roll,” writes food critic John Mariani, “the rest of the world, including the Italians, picked up on pizza just because it was American.”

As pizza rapidly became a staple in the United States, it underwent significant changes and acquired many regional American styles, such as Chicago’s deep-dish pizza and California-style pizza. The dish’s crust became a blank canvas inviting endless adaptations. Indians, Arabs, Greeks, Israelis, and others started to create their own versions of the Neapolitan dish and sold them in their restaurants and pizzerias. With the introduction of pizza chains, pizza became even more popular.

Today, pizza is the world’s favorite (fast) food, with 5 billion pizzas sold worldwide every year. Almost every country has adapted the dish to meet its preferred flavor profile. In Japan, for example, eel and squid are two of the most popular pizza toppings. On the other hand, Australians love to top their pizzas with shrimp, barbecue sauce, and eggs. These pizzas are very different from the dish the poor Neapolitan lazzaroni used to eat in 18th Naples. While Italians and European food critics and cookbook writers used to denigrate a food they associated with the grinding poverty of the Neapolitan lower class, today pizza can also be enjoyed in exclusive and expensive gourmet pizzerias. Those who dine at Renato Viola’s pizzeria, for example, can eat a pizza topped with lobster, buffalo mozzarella, and three types of caviar, among other ingredients. Called Luis XIII, it is the most expensive pizza in the world. While not everyone can afford a €9000 pizza, every food lover can agree with American comedian Kevin James: “There’s no better feeling in the world than a warm pizza box in your lap.”

A Foodie Guide to the Types of Nuts – For Your Culinary Treats!