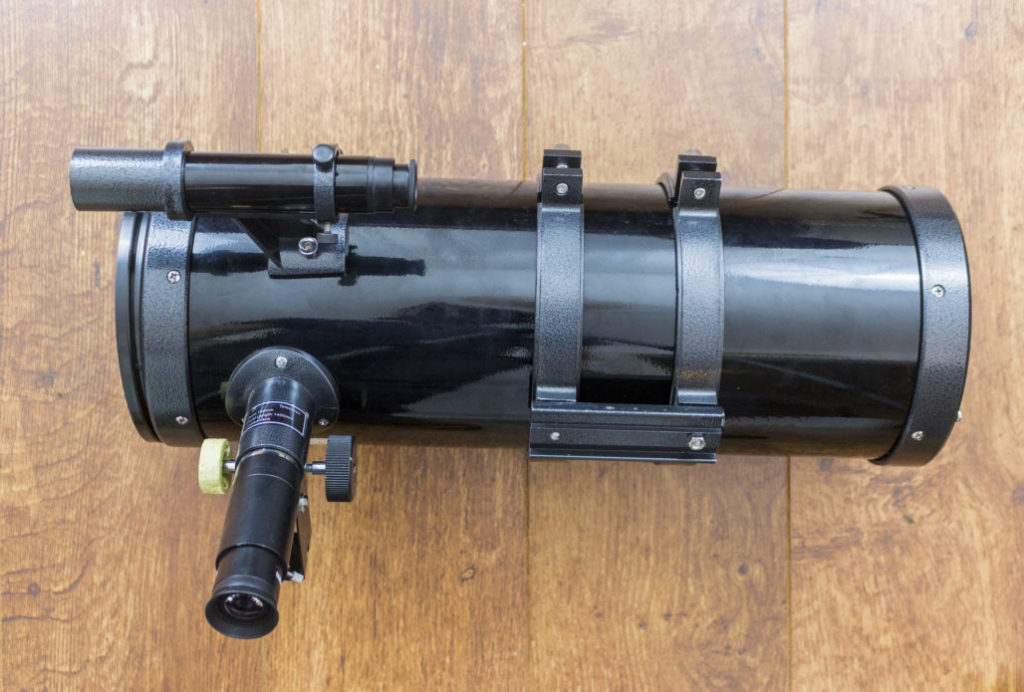 The first person to discover the law of gravity and motion was Sir Isaac Newton. He also independently developed the theory of infinitesimal calculus and made it an actual thing, something many people didn’t like the most in high school.

Being a busy, busy guy, the English physicist and mathematician created a telescope in 1668 that didn’t require lenses. Before then, reflector telescopes utilized lenses, and therefore they suffered from chromatic aberration; a defect in a lens system in which different wavelengths of light are focused at different distances, leading to color distortion in the image.

The Rise of Newtonian Telescope

In response to the issue of chromatic aberration, Newton developed the reflecting telescope around 1680 that used a primary curved mirror and a secondary flat diagonal mirror to collect the light and reflect it to a focus as opposed to lenses, which were plagued by color distortion.

Since this classic mirror telescope design doesn’t have the fringing colors associated with lenses, it become widely popular as a simple yet ingenious principle.

Today, these telescopes are commercially available in various designs and typically feature extra optical elements for the enhancement of image quality and to improve the position of the image.

How Does a Newtonian Telescope Work?

Sir Isaac Newton was tired of lenses that suffered chromatic aberrations, so he figured out that he could create his own mirrors by mixing tin and copper on the back. These mirrors reflected a great deal of light and were considerably cheaper compared to the silver utilized at the time.

Technically speaking, Newtonian telescopes are designed to capture light from the upper part of the tube, or rather the telescope tube. There is also a primary mirror on the lower end, which is either parabolic or spherical in configuration. So when light from celestial objects enters the top of the tube (the tube pointed toward the sky), it is reflected back upwards.

Since the light is reflected back into the telescope tube, a small, flat secondary mirror is incorporated in the focal path of the spherical primary mirror such that the image is deflected out through the side of the tube to the eyepiece without being obscured by the viewer’s head.

Otherwise, the observer would get in the way of incoming light. You could also imagine that the flat mirror (secondary mirror) would block part of the image.

However, due to its small size in comparison to the spherical primary mirror- which is collecting a huge amount of light- the small flat mirror will not block the image.

The light from the planets, stars, or nebulae is gathered in the telescope tube and the mirror at the top of the instrument. The image captured by the concave or parabolic mirror is then reflected towards the small flat mirror or rather the secondary mirror.

The image is then reflected towards the eyepiece, which is normally located at the side of the tube 90 degrees from the small mirror. The light beam reaches the focuser into an eyepiece, and can now be inserted for viewing. The focus and magnification take place within the eyepiece.

It is so fascinating to think that the classic design of Newton’s idea that dates back to the 1660s is still the most popular in current times. The world of astronomy has seen significant progress in various aspects of the telescope such as the mounts, focusing, and magnification.

In fact, some Newtonian models boast a computerized design to explore the night sky and target certain celestial objects. At the bottom, the Newtonian telescope is still a design that was created by Sir Isaac Newton in the 1600s.

Newtonian Telescope with a Catadioptric Design

Newtonian reflector telescopes that feature a catadioptric design are developed with an additional lens or correct plate. They, therefore, don’t conform to the stated “classic” design. They are mostly called catadioptric Newtonian telescopes.

Another popular design variant of Newtonian telescopes is the Schmidt-Newtonian telescope. As the name suggests, these ones are equipped with a Schmidt corrector plate mounted on the forward side of the instrument.

The correct plate ensures a closed system, meaning there will always be intact air in the telescope tube, which helps to prevent sudden changes in temperature.

Other benefits associated with the plate include the fact that it rectifies any aberrations resulting from the parabolic mirrors. Behind the Schmidt plate is the secondary mirror that ensures that the placement of the spider vane does not interrupt.

That said, some catadioptric Newtonian telescope designs do not incorporate the Schmidt plate. These models often come at a budget price and tend to have a Barlow lens added into the light path to enhance the focal length.

A Barlow lens is basically a component with a diverging lens meant to increase the focal length. It enables manufacturers to keep the overall telescope tube length relatively short but still have the option to make the focal length as long as desired.

The main downside to Barlow lens Newtonian telescopes is that the optical imaging quality is prone to distortion due to the Barlow lens. These models are also quite challenging to collimate.

Note that when collimating a Newtonian telescope, the user needs to be able to view considerably large scope of both the primary mirror and the secondary mirror, but this particular design makes the entire practice pretty much difficult.

Given that these models are mostly used by beginners and amateur astronomers, it can be really challenging for them to execute the necessary adjustments.

On the bright side though, some of these models are made with a Barlow lens that can be unscrewed for such reasons. With respect to the above facts, experts suggest that beginners should opt for the classic Newtonian telescope models that don’t have built-in lenses.

The idea behind Newtonian telescopes was to combat chromatic aberration that plagued reflecting telescopes. So, that’s the most notable highlight of the reflector telescope. You won’t find a ring of color around objects while viewing with this type of mirrored telescope.

The reflectance and overall quality of mirrors are equally important. Quality mirrors will definitely result in a quality image. These features can be very different depending on the model, which is why we recommend ordering from well-known and reputable brands.

For instance, if the telescope is 100/100 mm, then it has an aperture ratio of f/10. Such types of reflecting telescopes usually have a generous scope of apertures and aperture ratios.

While refracting telescopes tend to have a smaller range of aperture ratios to help mitigate chromatic aberration, a Newtonian telescope can effectively be designed with optics of up to f/4. That means Newtonian telescopes are optically fast even with relatively short focal lengths.

Just like any other reflector, Newtonian telescopes are subjected to comma; an off-axis aberration where images tend to flare inwards in the optical axis direction.

Fortunately, that’s where the two/three-legged curved spider comes into play.

Ultimate Review of The Best Cameras For Astrophotography in 2022