Meteors, Meteoroids, and Meteorites, oh my! 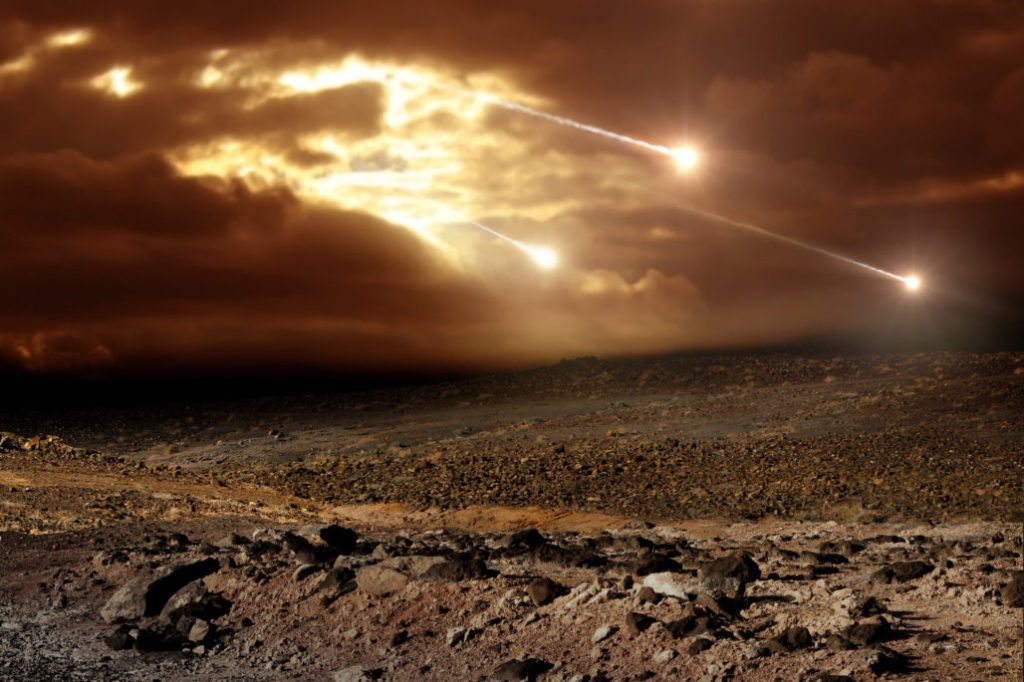 There is nothing more exciting than seeing a shooting star flash across the night sky. You make a wish and can’t wait until you see the next one. But what really are these magical wish granters?

There are many different objects that shoot through our skies on a regular basis, we just don’t always see them. Depending on where these objects are in relation to Earth’s atmosphere determines what type of object it is.

We’ll start with the furthest away from Earth, comets. These can be thought of as dirty space snowballs as are mostly made of ice and dust. Comets where formed millions of years ago during the formation of our Solar System.  Comets orbit the Sun, with a very large orbit, often reaching out past the orbits of many planets. This is why we only see comets every now and again. Below shows the expansive orbit of Halley’s comet, which we won’t see again until 2061.

As a comet gets close to the Sun, it’s ice will start to vaporize, creating a cloud of dust and gas. When this cloud gets blown by solar winds it gives the comet two tails, an ion tail from the gas and a dust tail.

No matter the path of the comet, its tails will always point away from the Sun. This is because the winds coming from the Sun are blowing the tails.

These tails get longer as the comet moves closer to the Sun and shorter as it moves away. Most comets have enough ice for a few hundred passes near the Sun. There are two possibilities when a comet runs out of ice. The comet could break apart from the loss of the icy material, or the comet’s surface could be covered in tar-like substances, remaining after the ice evaporates, that it forms a protective layer around the remaining ice.

See also
10 Incredible Facts About Space That Will Surprise You!

Protecting it from the Sun and future evaporation. If this happens is transformed into what we call a stealth comet, which is basically just a near-Earth asteroid since it will no longer have tails.

Like an asteroid, a meteoroid is made up of rock and metals. A meteoroid is much smaller than an asteroid, with sizes ranging from small grains to large boulders. They are just floating around in space; they are not necessarily orbiting in the asteroid belt. If a meteoroid enters Earth’s atmosphere, it is then called a meteor.

A meteor is a meteoroid that got sucked into Earth’s gravity. Scientists estimate that more than 48 tons of meteoric material fall into our atmosphere every day. Most of which burns up in our atmosphere before we see it. As the meteor falls through the sky, it experiences friction in the atmosphere causing it to heat up and glow, sometimes being visible. If it is bright enough to be seen it looks like a star shooting through the sky. This is why meteors are more commonly known as shooting stars.

A meteor shower is what happens when a lot of meteors enter the Earth’s atmosphere within a relatively short period of time. Sometimes this happens as the Earth moves through what is called a meteor swarm, a large number of meteoroids moving in parallel paths.

A meteor shower can also occur when the Earth passes through the path where a comet traveled. These meteors are fragments of the comet the Earth pulled off the comet as it passed by. There are some well know meteor showers that occur yearly. In mid-August there is the Perseids shower, the Leonids in mid-November, and the Eta Aquariids in early May.

The Eta Aquariids shower is linked to Halley’s comet. Meteor showers get their names from the constellations they appear to originate from, for example the Leonids appear to come from the Leo constellation.

A 30-meter-diameter asteroid exploded above the ground in Tunguska, Russia in 1908. Approximately 80 million trees were knocked over by the explosion. It has been estimated that this explosion was 1,000 times more powerful than the atomic bomb dropped on Hiroshima. Luckily this happened in a remote area of Siberia, or a city would have been destroyed.

Russia was hit yet again in 2013 above the city of Chelyabinsk. An asteroid of about 20 meters in diameter shot into the Earth’s atmosphere. The object never impacted the surface, it exploded while it was still in the air, about 30 kilometers above the ground.

See also
What are the Different types of Telescopes (Would You Know?)

This was a massive explosion, releasing an amount of energy equal to 500 kilotons of TNT. Because it never reached the ground there was no impact damage. However, it still created a massive shockwave that injured 1,500 people and damaged 7,200 buildings across six cities. The majority of injuries were caused by people being hit by flying glass when the shock wave shattered windows.

Probably the most famous impact event was the asteroid that killed the dinosaurs, along with 70% of all the species on Earth. This asteroid hit Earth in what is now Mexico, 65 million years ago and was roughly 10-15 kilometers in diameter. Though we were not there during this event we can tell a lot from the geological record.

The asteroid hit water, which would have caused mega-tsunamis that would have started down in southeastern Mexico and traveled all the way to Texas and Florida, and then even further through the shallow interior ocean that used to cover what is now the Great Plains in the United States.

Not only were there massive waves causing destruction, but the blast from the impact would have blown chunks of the asteroid so high they would have briefly left the atmosphere and rained back down onto Earth. This would have cause millions of shooting stars to fall back down to Earth, heating up on the way down.

This would have heated the ground as they hit and ignited wildfires. On top of the fires and the floods, the shockwave from the impact would have triggered massive global earthquakes and possibly caused volcanoes to erupt.

There were not only these massive apocalyptic events but also dust and debris that would have covered the Earth’s surface smothering most plant life. It is suspected that the dust even lingered in the atmosphere, blocking out sunlight and disrupting the entire food chain for many years.

Will There Be Another Devastating Impact?

Though, predicting odds on the scale of tens of millions of years is highly debatable. Realistically, the odds of an extinction level impact are approximately 0.000001%, though never zero. However, meteors the size of small rocks or grains of sand enter the Earth’s atmosphere every day, with a small number making it to the ground as meteorites.