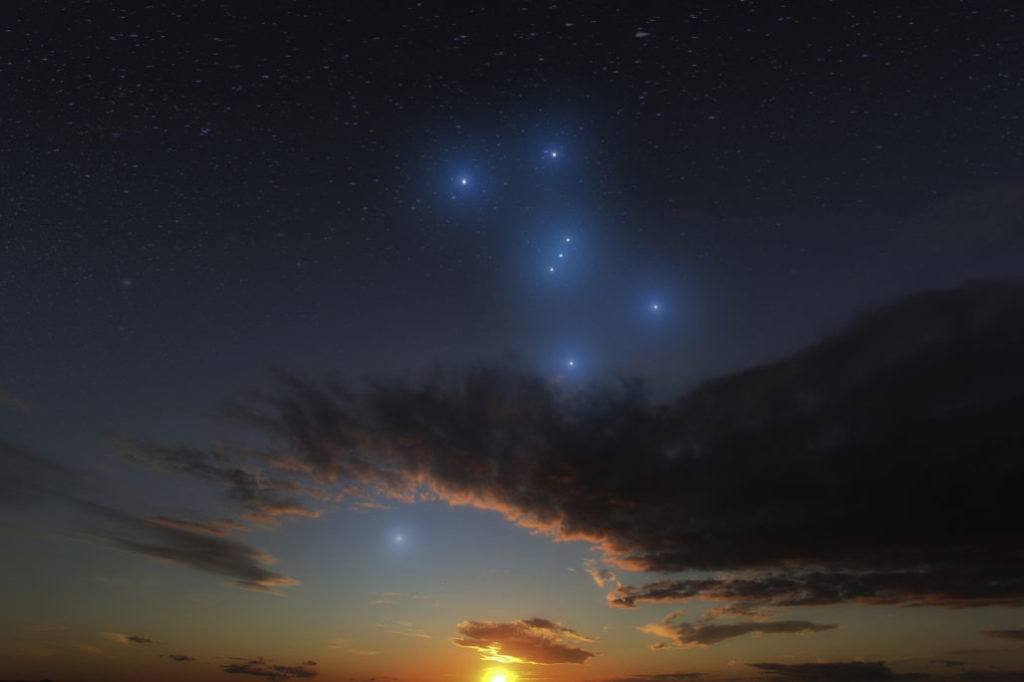 The brightest star in our night sky is known as Sirius, or the “Dog Star”. It gets its name from the Greek “Seirios” which means “glowing” or “scorching”. It’s nickname, “Dog Star” is in reference to Sirius being the leading star in the Canis Major constellation, Latin for “the greater dog”.

Sirius is one of the closest stars to our solar system being only 8.6 light years away. This means it takes light from Sirius 8.6 years to reach Earth. One light year is nearly 6 trillion miles or 9.4 trillion km.

The star we see as Sirius is actually two stars, one large bright star, Sirius A, and a small dim companion star, Sirius B. Sirius refers to the star system. Sirius A is the only star distinguishable to the naked eye.

Stars were discovered to have “proper motion” relative to one another in 1718 by Edmond Halley. This means that with respect to more distant stars, closer stars move across our sky in predictable angular motion. In 1844, Friedrich Wilhelm Bessel published a scientific note describing how Sirius had been deviating from its predicted movements since 1755.

This was the first hypothesis for a companion star to Sirius. Bessel’s hypothesis was confirmed in 1862, when Sirius B was spotted by Alvan Graham Clark and fellow astronomers.

If Sirius A was place right next to our Sun, it would be more than 20 times brighter then the Sun. Sirius A has a surface temperature of 17,000 degrees Fahrenheit (9,400 C) whereas our Sun is only 10,000 F (5,500 C). Due to its surface temperature Sirius A falls into the category of an A-type star.

See also
Just How Special Are Eclipses? - A COMPLETE Guide

Sirius A is approximately twice the mass of our Sun but much smaller. Sirius A is less than twice the Earth’s diameter. Despite its small size, Sirius A puts out 26 times more energy than our Sun.

Sirius B – The Pup

Sirius B is so dim that it can only be spotted with a telescope, and when it is far enough away from Sirius A to not be outshone. Sirius B is 10,000 times dimmer than Sirius A. Sirius B is approximately as massive as our Sun but only about the size of Earth, making Sirius B extremely dense. To put it in easier terms, if a lollipop was as dense as Sirius B, it would be heavier than a car.

Sirius B is so dim because it is a White Dwarf, which is the last stage of life for a low-to-medium-mass star. It was the first White Dwarf to be discovered. White Dwarfs will continue to get dimmer until they are no longer glowing and become Black Dwarf stars, the theoretical final stage of a star’s life. Scientists study White Dwarfs in hopes of getting a better understanding of the lifecycle of stars. Our Sun will also develop into a White Dwarf.

While Sirius is mainly observed as being blue-white to white in color, it often flickers all the colors of the rainbow. These color changes happen when a bright star, such as Sirius, is shining through our atmosphere. The change in temperature and density of Earth’s air affect the incoming starlight. This is most prominent when the star is observed low in the sky. While this color change happens for other stars as well, it is most noticeable with Sirius because it is so bright.

See also
The Mysterious Planet 9 - Is it Really Real?

How to Find Sirius, The Dog Star in the Night Sky

There are very few things that outshine this star in our night sky. The full Moon, the international space station, Venus, Jupiter, Mars, and sometimes Mercury.

During the next twelve years Sirius A and Sirius B will be their furthest apart from each other, making it possible to see Sirius B with a basic telescope.

Sirius is easy to spot as it is most likely the brightest thing in the sky, unless the Moon is full or one of the planets mentioned above is visible. But if you would like a little more direction you need to look no further than a very distinguishable constellation, Orion.

Due to its prominence in the sky, Sirius is recorded in many ancient astronomical records. Many ancient cultures who are thought to have had no communications all related the bright Sirius star with either a dog or a wolf.

See also
Ultimate Review of The Best Travel Telescopes in 2022

This co rising of Sirius with the Sun was also of great importance to the Egyptians. It not only marked the start of the Egyptian New Year, but they observed that Sirius rose before sunrise right before the Nile’s annual floods. While the floods could bring devastation, they also brought new soil and fertilized the lands.

The Egyptian goddess Sopdet is the personification of Sirius. Sopdet started as an agricultural deity closely associated with the Nile. She evolved into a mother goddess representing fertility.

In India Sirius is sometimes known as Svana, the dog of Prince Yudhisthira. The prince and his four brothers and Svana set out to find the kingdom of heaven. One by one the brothers abandoned the search until only the prince and his dog were left. Finally, they found the gates of heaven. Indra, the gatekeeper, denied Svana entrance.

Yudhisthira was dismayed and said that he could not abandoned his faithful friend and servant. When his brothers abandoned the journey to follow their own desires, Svana chose to follow Yudhisthira. Without Svana the prince said he would forsake even heaven. This appeased Indra and he welcomed both into heaven.

See also
Mars - The Red Planet (Everything there is to Know!)

Sirius had great importance to many ancient civilizations and is still of great importance today. Being the brightest star in our sky, one of our closest stellar neighbours, and the first white dwarf discovered, the dual stars of Sirius give astronomers great insight into the life and evolution of stars.