Can you Mountain Bike with a Hybrid Bike?  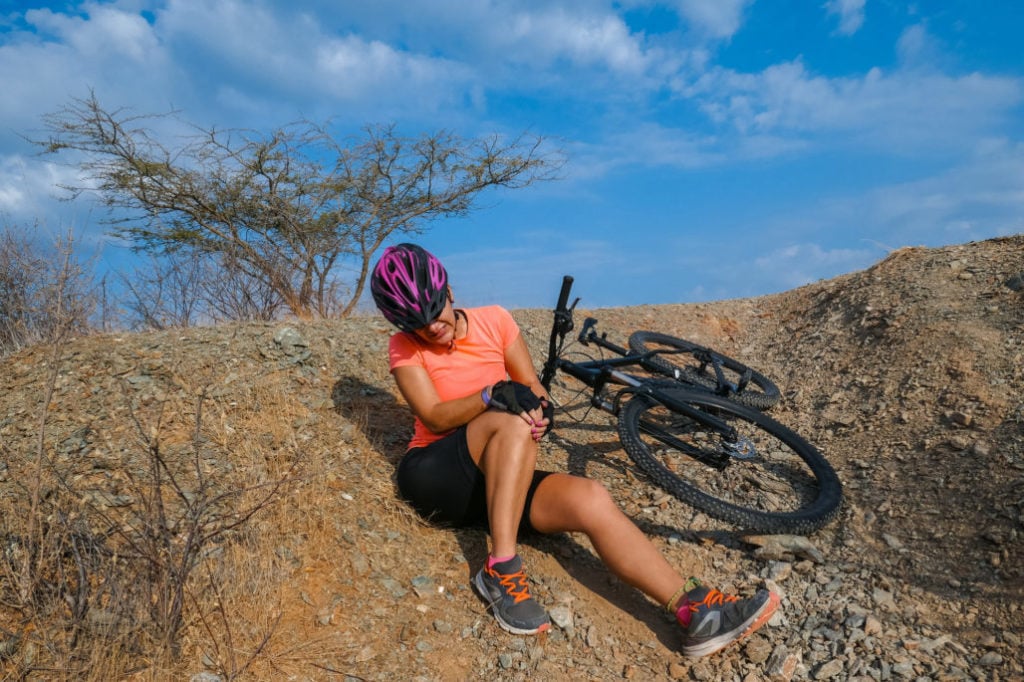 Biking is a hobby that many people across many different cultures enjoy, and of those cultures, you will see many different styles of biking. Biking as a means for transportation in a city will greatly differ from off-road and mountain biking.

So, what about people that enjoy both street biking and mountain biking?

What is a hybrid bike?

A hybrid bike is, just like the name implies, a hybrid of a street bike and a mountain bike. There are a few key components that separate the different types of bikes: handlebar placement, tires, gearing, braking, suspension, and frame.

Handlebar placement on a hybrid bike is more like that of a mountain bike, where the handlebars are flat, and you sit in a more upright position. This position is generally more comfortable for the human body.

The tires of a hybrid bike vary depending on the kind of hybrid that you get. Some tires are more like road bikes, where they are thinner and have a larger diameter, while other hybrid bikes are geared more for off-road use, with smaller but thicker tires.

Hybrid bikes tend to have a wide range of brakes, depending on how the user intends to use the bike in most conditions. The most common type of brakes on a hybrid bike are rim brakes, which are more common on road bikes. However, some hybrid bikes come with disc brakes, like those that you would see on a mountain bike. Rim brakes are cheaper and easier to work on but lack in stopping power and can be difficult to use in all conditions.

Disc brakes are easy to use in all conditions and have a lot more stopping power in rough conditions. These advantages come at the cost of being more difficult to replace.

Many hybrid bikes do not come with any suspension at all, as it adds weight and makes peddling less efficient, which is bad for people that ride on smooth streets. However, some hybrid bikes will include front suspension to absorb impact on rougher streets. Hybrid bikes are more like road bikes in this sense.

Mountain bikes will usually come equipped with both front and rear suspension, as they see a lot rougher roads than hybrid and road bikes.

Most hybrid bicycles are made up of aluminium, which is affordable, light, and strong. There are other options for hybrid bikes, though, depending on the price. Higher-end hybrid bikes will use carbon fiber, whereas others will use steel in place of aluminum.

The frame also allows you to add some slight modifications that can make your daily commute easier, like when you need to get groceries.

Hybrids bikes, without being properly geared for mountain biking, will have a really hard time while mountain biking and is generally regarded as unsafe. Mountain bikes on bumpy roads are relatively uncomfortable due to the suspension, and on a mountain, you will run into lots of rocks, hills, and lots of other small obstacles that the bike isn’t built to handle.

Can you mountain bike with a hybrid bike?

Modifying the drivetrain is also an option if you are thinking about modifying your hybrid bike to ride on a mountain. The gear ratio of a mountain bike is much lower than that of a hybrid, and if you have the tools and resources to swap the gears, then it makes it easier to take the hybrid out into the mountains.

Keep in mind that the chain is lower to the ground in a hybrid bike, which puts it in more danger of breaking when taken out into the mountains. Swapping out the brakes to disc brakes is also an option that you have when you are modifying your hybrid bike to be more like a hybrid bike.

Doing modifications to your hybrid bike to make it safer to ride in the mountains is an option if you only plan on doing small and safe mountains; however, you will get far more value out of a mountain bike in those scenarios. Plus, all the costs to modifying the hybrid bike might end up being more than buying a new, cheap mountain bike.

Can I take my hybrid bike on a trail?

Hybrid bikes thrive on trails and pathed areas. If the trail isn’t too rough, a hybrid bike can absolutely take on a trail without many modifications. Taking the bike off the path isn’t recommended, so stick to the path that is easiest if you decide to take the hybrid bike onto a trail.

Hybrid bikes are not meant to take on trails at high speeds, though. The ride will get rough and hybrid bikes will not be able to handle the trail like a mountain bike would at high speeds.

If the hybrid bike has front suspension, the ride will be a lot easier on the trail, especially if the trail has some small rocks scattered throughout.

Is a mountain bike better than a hybrid?

A mountain bike is better than a hybrid when you are only talking about off-road and mountainous scenarios. When it comes to taking on the streets or even gravel paths, a hybrid bicycle will be a much better ride, and you will have a lot more success with it.

It all depends on what your use for the bicycle will be. In street riding, a mountain bike is highly inefficient, and you will use a lot more energy if you are planning to use the bike to commute. But if you are biking for fun out in the mountains and take trails often, then a mountain bike will outperform a hybrid any day of the week.

A hybrid, on the other hand, is built to be on paved roads, with some small off-road and hard moderate terrain capabilities. For commute and some light trail riding, then a hybrid bike will outperform a mountain bike.

A hybrid bike has a good balance between road bikes and mountain bikes but is more focused to be a daily commute bike than anything else. Their gear ratios are made for longer distances than mountain biking, and the frame and suspension are built for paved roads.

Hybrids are good enough for trail riding and small mountain riding if you modify them enough, but in no way should they be used for mountain biking. Depending on your use for the bike, a hybrid bike is an excellent choice for both street riding and trail riding. Hybrid bikes are excellent to be your daily commuting bicycle.

How Good are Vilano Bikes?

Schwinn Bikes History: The Rise and Fall of the Schwinn

Do You Need A Helmet For a Tricycle?

How-To Pump-Up Road Bike Tires (Not As Hard as you Think!)