Do You Need A Helmet For a Tricycle? Wearing helmets for a tricycle seems like overkill, especially considering most tri-bikes are low to the ground and don’t go as fast as the traditional bikes.

But for what it’s worth, if you want to ride a bike, you MUST wear your helmet and wear it properly-at least that’s a firm rule in my house.

See, I grew up in the 80s and was the only kid on the block on a bike helmet.

Did I hate it?

I loathed helmets and was that weird kid in the block.

The good news is the helmet came through for me a couple of times. In particular, I once fell off my bike, and my helmet damn cracked in half but didn’t have any damage on my noggin. The helmet took it all.

Now, I understand most young cyclists hate helmets. It’s not even compulsory to have one when riding bikes and riding tricycles.

But for their safety, I’d strongly suggest even tricycle riders always ride one when going on their bike. It can be a lifesaver.

Do Kids Need to Wear a Helmet of a Tricycle? 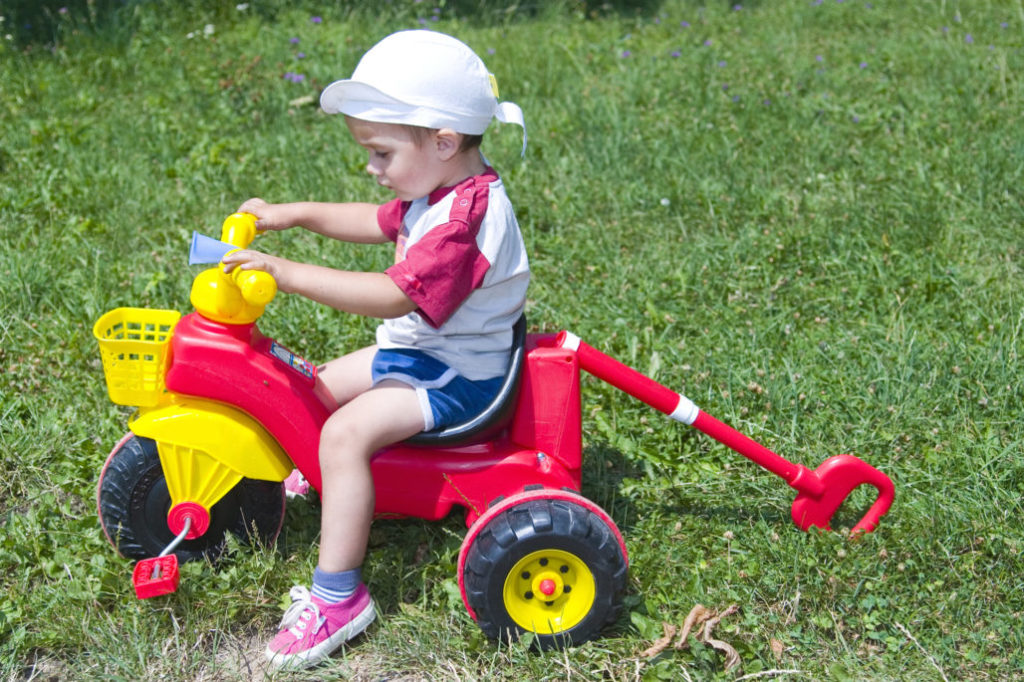 Helmets aren’t compulsory, and depending on the state, it’s even legal to ride without one.

But here’s the thing, the inconvenience that comes with a helmet doesn’t compare to the risk of smashing your kid’s melon to the ground or taking hits from flying objects & debris from other road users.

I understand I sound like an idiot right now.

After all, what’s the biggest risk for a kid on a tricycle? Or rather, what’s that I see that most parents don’t usually think could be a problem?

See, it only takes one crazy fall in the weirdest way for your young one to get hurt.

And in most cases, accidents happen for things beyond their control.

They’re so young, and their brains are important, so you’d want to reduce injuries, especially brain injuries.

For example, I remember when my kid, not even pedaling but pushing his tricycle with his feet, turned the handlebars hard and fast.

He jackknifed his tricycle and was violently thrust forward, hitting his head straight to the ground.

Before then, I had not even my wildest imaginations thought that he could ever fall on such a “stable” balance bike.

The good news is he had a helmet on, so he was fine.

However, the incident just underlined the importance of a helmet, and I don’t think I would ever let him ride without one.

Simply put, while these fatal accidents are sometimes far-fetched and less likely to happen, they can sometimes turn into reality and turn a fun moment into a trip to the emergency department.

The other reason I’d recommend a helmet for trikes is to instill the habit of safe riding.

Granted, most falls from a trike are less likely to injure him, but you want your children to get into the habit of always being on a helmet when riding a bike.

See, you need to figure that you’ll not be parenting them anymore at some point.

Therefore, it’s necessary to start early and encourage them to wear their helmets every time they ride.

According to a study by Northwestern University Medical School& Children’s Memorial Hospital, wearing a helmet from a young age ingrains the habit. Wearing one will come naturally when they’re old enough for an actual bike.

For example, my son has a helmet with dinosaurs all over it, and whenever he wants to ride his tricycle, he brings us a helmet to let us know 😊

It has also eased my uncertainty over whether he has it on when I’m not around because he considers it a crucial safety gear for bike riding.

How Long Should I Wait Before Buying my Kid a Helmet?

Generally, the recommended age for wearing a tricycle helmet is “one year,” but most are usually ready by three years.

By around 18 months, most kids usually have their neck muscles developed enough to support the weight of a helmet and keep their melons from bobbing when riding over uneven surfaces.

So, ideally, you’d want to ensure your children can hold their heads up easily and without them constantly bouncing around.

At the infant stage, it’s usually not much about the crash risks but ensuring your kid’s brain isn’t getting sloshed around like a bobblehead doll.

The Legality of Helmet Use for Tricycles 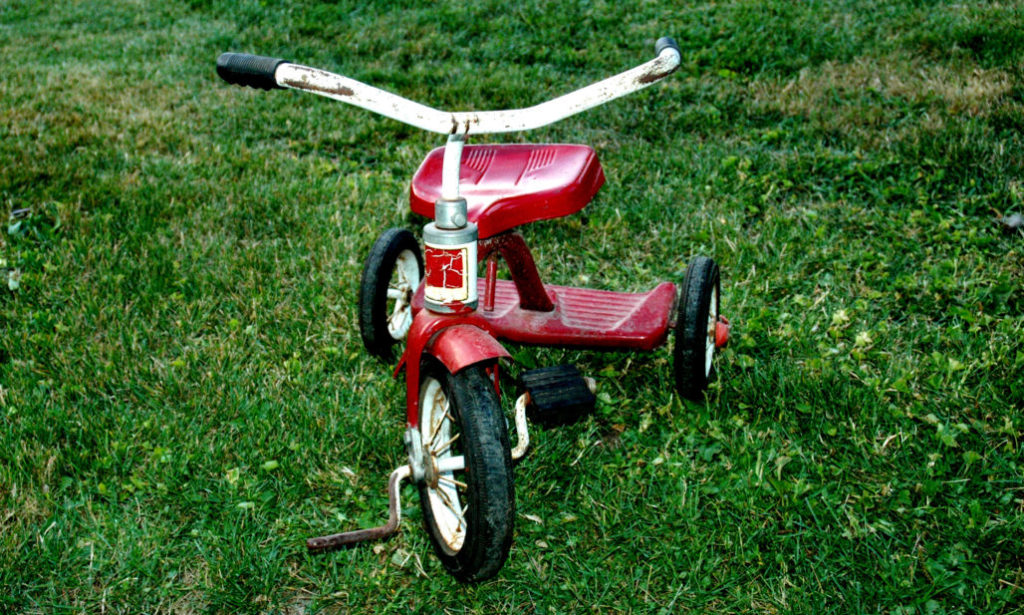 The legality of helmet use for tricycles depends on the state law.

For example, under the California Law, it’s compulsory for all bike riders under 18 years to wear a helmet.

In addition, users of scooters and skaters are subjected to the same state law.

However, tricycle riders are generally exempted from the bike law helmets, and no state law that compels cyclists to wear helmets.

In most states, children are not required to ride a tricycle by law. But as a responsible parent, it’s always good to ask your kid to wear one.

How do Tricycle Helmets for Children Work? 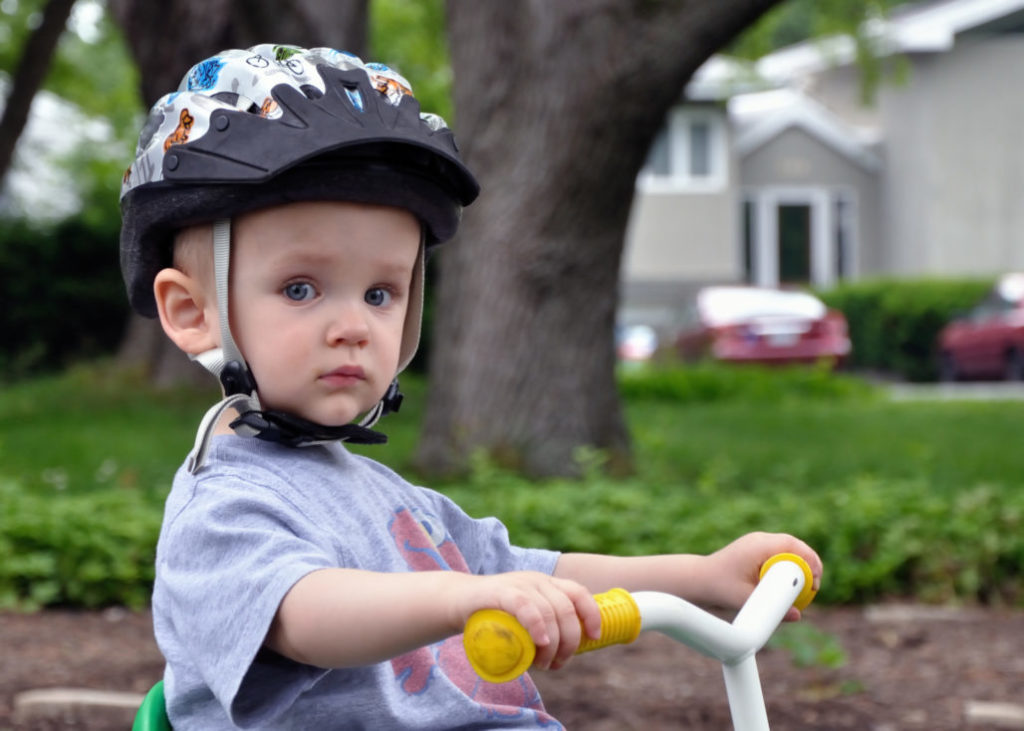 Usually, these helmets have a Styrofoam interior.

The material absorbs the kinetic energy in case of a crash. The helmet spreads the energy away from your kid’s brain and prevents brain injury along with the outer hard plastic shell.

However, a Styrofoam isn’t an armor that can take repeated hits. Instead, it crushes and condenses on impact.

Therefore, it’s only meant for a single crash when your head hits something solid.

It’s why it’s always recommendable to dispose of your helmet once you’re involved in a crash.

Selecting a Tricycle Helmet for your Kid; What to Consider in your Next Toddler Tricycle Shopping 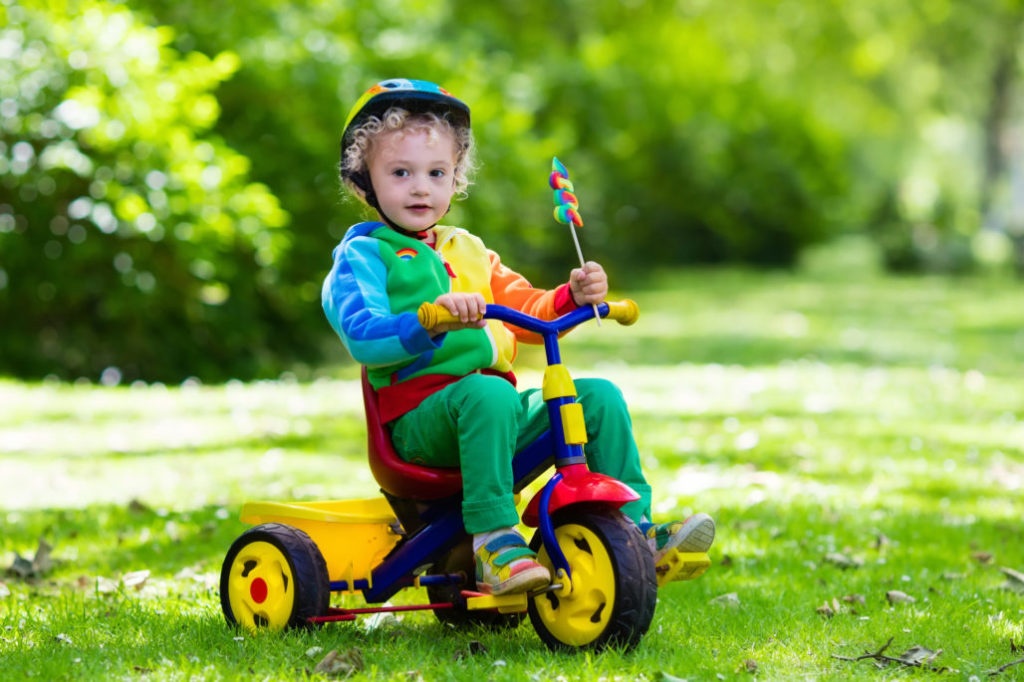 Helmets come in varying price ranges, but most kid’s options are designed from fairly inexpensive materials.

Even then, the pricier helmets won’t necessarily offer superior protection to the cheaper options. See, all helmets are built based on the same principle.

Helmets are built to industry standards, and your $20 helmet is about as safe as the $400 helmet.

That said, it’s important to check your helmet complies with the relevant safety rating.

Usually, the standards indicate the helmet has passed the compliance tests regarding impact-resistant, retention, etc.

Keep in mind there’s no law prohibiting the sale of non-compliant helmets, so you need to be careful in your next selection.

Another important criterion when selecting a tricycle helmet for children is style.

Aesthetics don’t matter a lot in the real world, but get something nice and stylish if you want your kid to love wearing their head protector.

Sizing is also crucial because you don’t want to get them a huge helmet.

Start by measuring the size of your children’s noggin using a measuring tape. Alternatively, pick a cord, and measure it against a ruler.

Place the measuring tape against their forehead, and run it horizontally, just above their ears and two inches above their eyebrows.

The good thing with selecting the helmet size for most children is pretty easy because most of them are usually listed according to the size and age.

Some of the popular classifications for trike helmets for young cyclists are:

I wouldn’t want to comment on the exact sizing because every manufacturer has a different sizing system.

The best way to figure out is to try the helmet.

I’d also suggest you keep away from buying big helmets so that your children can grow into them. It won’t fit snugly, won’t offer protection, and will be cumbersome for your kid to use.

Do you need to wear helmets for a tricycle? Frequently Asked Questions (FAQs) 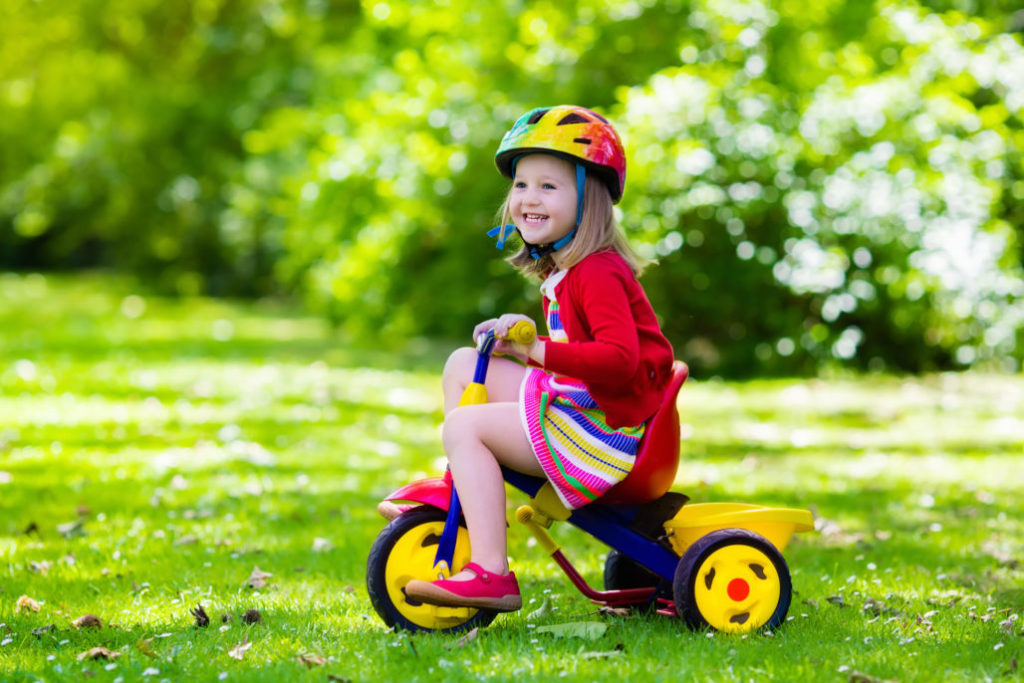 Q: Can My 2-year-old ride a tricycle?

A: Yes, most tricycles are easy to balance and ride than regular bikes.

Most kids can even ride and balance without falling on training wheels starting as early as one year.

On the other hand, they’re usually developed and coordinated for the regular bike riding from 7 years.

Q: When should I get my toddler a trike bike?

A: While children can ride a trike as early as one year, I’d recommend the trikes after 2 or 3 years.

Tricycles aren’t only fun but will help with the growth and coordination of your young one.

Q: Can I drive a tricycle on a full car Licence?

A: Yes, anyone can ride any powered trike of any power rating, provided you’re above 21 years and have a car licence. 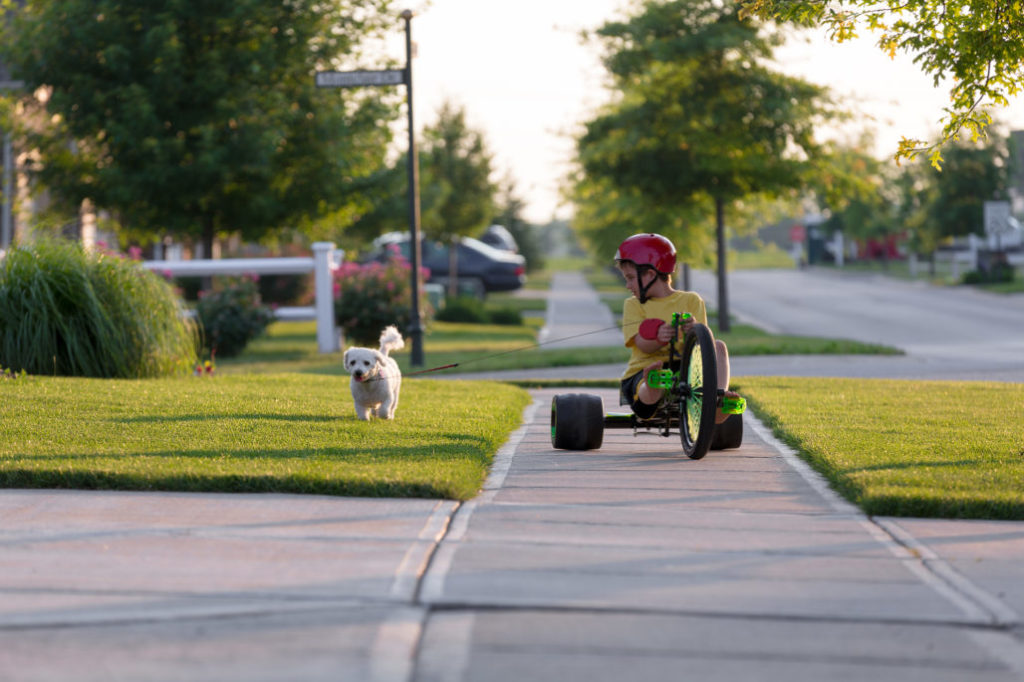 Should your kid wear a helmet on a tricycle?

A helmet is necessary for head protection, but more importantly, it instills the helmet habit, which will come in handy later in their biking life.

The best way to protect your head injuries and bicycle-related injuries for tricycle riders is by riding safely and with good judgment.

Don’t expect a helmet to keep you from head injuries and save your life if you’re riding recklessly. If you don’t feel comfortable in any situation, don’t push the envelope.

In any case, I’d recommend your ride as though you’re bareheaded.

Cyclocross Vs. Gravel Bike – Which one is Better?

How Good are Vilano Bikes?

Schwinn Bikes History: The Rise and Fall of the Schwinn