Who Invented the Bicycle? 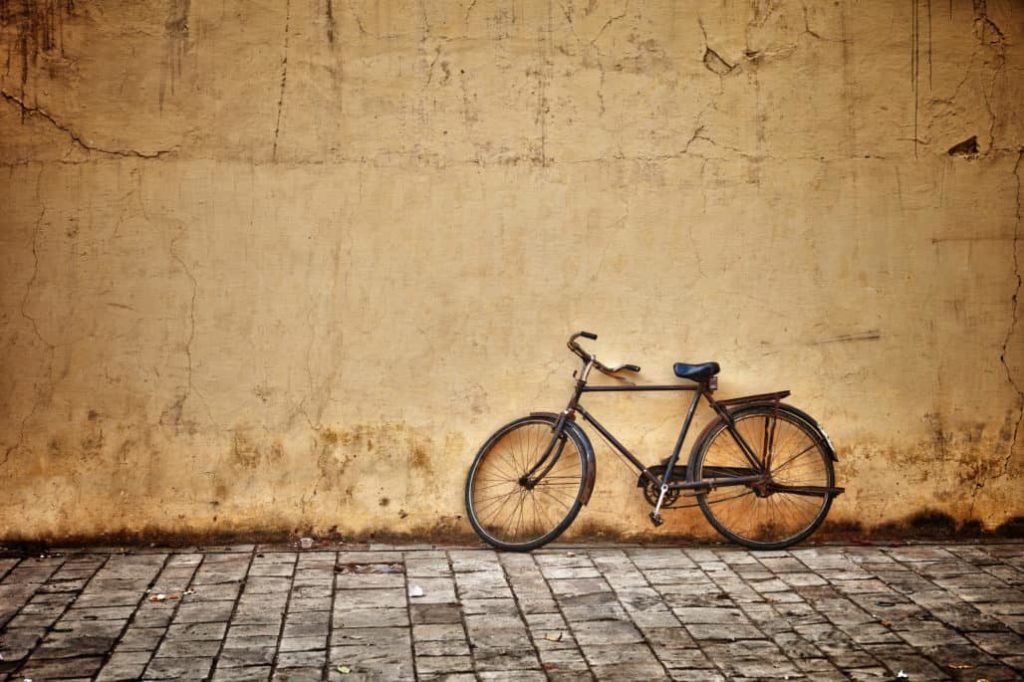 The bicycle is one of the most interesting inventions of the 19th century. There are few inventions that have been so universally successful worldwide. It is difficult to separate fact from fiction when it comes to solving the puzzle of who actually invented the first genuine bicycle.

This article is an investigation into some of the people who are known to have a played an important part in the development of the bicycle that we recognise today.

The horse and carriage was the only type of transportation at the beginning of the 19th Century. The only options of personal transport were either walking or going on horseback. Public transport was available in the form of carriages for hire called Hackney Carriages. In the second half of the century trains and railways began to make sweeping changes to the way people travelled.

The railways provided access to the large industrial towns. Personal transport remained an unresolved problem for people living in remote areas. It is clearly evident that a bicycle at this time would have been a very useful and welcome invention. 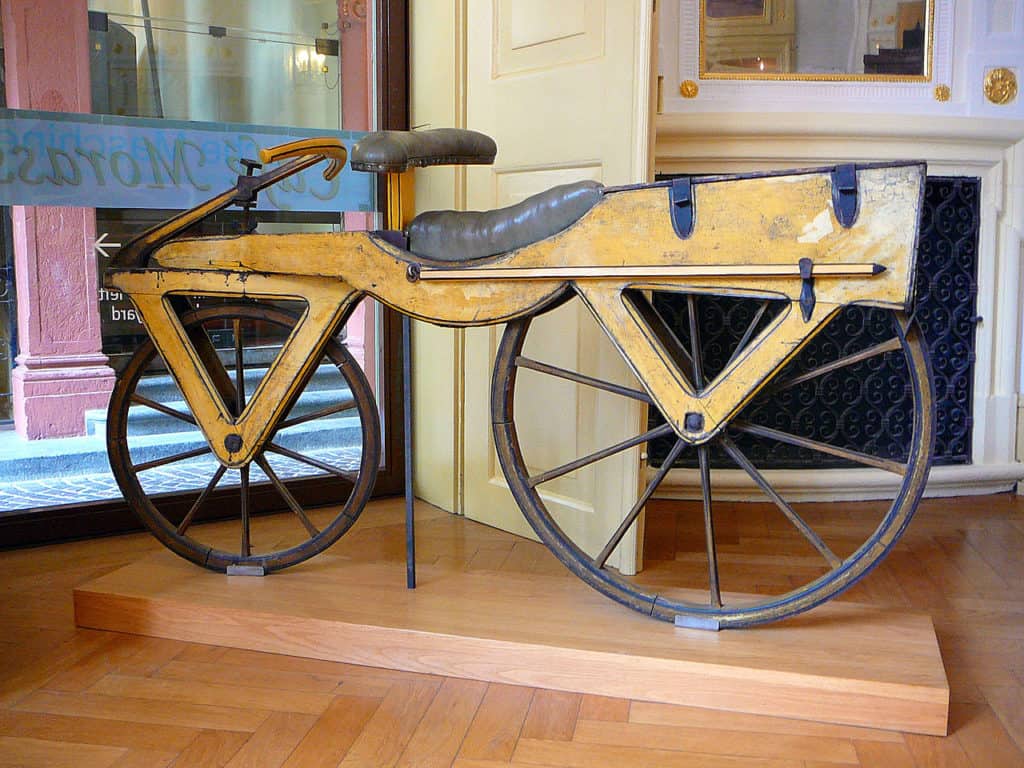 Baron Karl von Drais of Karlsruhe, Germany, born 1785 invented the first known bicycle-like machine. The wooden vehicle was manufactured entirely from ash wood. It was known as the “Laufmaschine” (running machine) in Germany and the “Draisiennes” in France. Certain documentation refers to this early ancestor of the bicycle as a simple walking machine.

Drais included a cleverly designed steering mechanism that enabled the rider to navigate around corners. It has been stated that Drais invented the Laufmaschine so that he could travel around the Royal Gardens quickly. It is more probable that Drais invented his “Laufmaschine” due to an unstable economy. Severe weather had ruined the harvests across Europe making a shortage of oats and hay.

See also
How To Prevent Hip Pain When Riding An E-bike?

Prices of essential commodities began to soar and the cost of keeping horses became too high. Horses are large animals that require a lot of food and they also need to be groomed. An economic crisis followed leading to many horses being slaughtered.

Drais was inspired by this deficiency and set out to invent a human powered replacement for the horse. His original idea was to ensure that large numbers of people could travel faster than walking or through travelling by horse and carriage.

The next inventor credited with the title of “inventor of the bicycle” is British coach builder, Denis Johnson. This invention by all intent and purpose is nothing more than an improved version of Drais’ Laufmaschine. He actually purchased a Laufmaschine of his own and set about creating a new and improved version which he marketed under a new name.

Johnson patented his velocipede as the “pedestrian curricle” and it also became known as the “Dandy Horse”. The word velocipede is derived from two Latin words Velox, meaning fast, swift, rapid, quick and Ped (plural Pedes) meaning foot or foot-like part. It can be translated into several phrases but the most accurate would be “fast feet”. 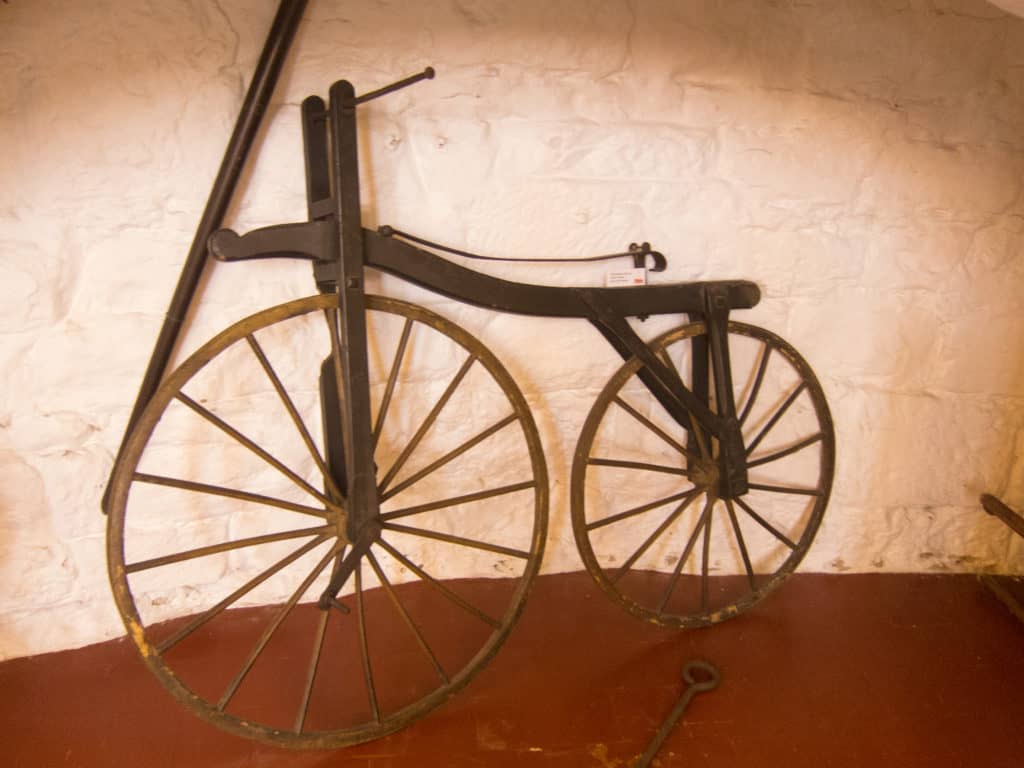 The pedestrian curricle became popular and a new craze soon developed. The fad lasted for a period of approximately 3 years. Johnson’s “hobby horse” style of vehicle still did not incorporate any form of drive mechanism. The absence of such crucial criteria makes it difficult to accept that Johnson was the definitive inventor of the bicycle.

There is some confusion about which inventor went on to develop the bicycle from these early velocipedes. Some documentation suggests that it was Scottish blacksmith Kirkpatrick McMillan. It has been iterated that his innovative bicycle invention of 1839 incorporated a treadle and rod for the rear drive mechanism.

See also
What is a Gravel Bike? - Is it Worth a Buy!

There is no surviving proof or physical evidence to support these claims in the form of plans, diagrams or drawings. Kirkpatrick McMillan can not be discounted completely as the inventor of the bicycle as he may well have built a credible machine that never made it into commercial production.

The most significant point being that the drive mechanism did not incorporate the pedals and crank that is synonymous to the bicycle we know and recognise today.

French inventor, Pierre Lallement (born circa 1843) is a more realistic contender for the title of inventor of the bicycle. Lallement was apparently inspired after watching someone travel past him on a velocipede. He was determined to add a form of transmission to the vehicle.

Evidence shows that Lallement worked for the Michaux Company in Paris for a short period. Pierre Lallement cleverly devised a transmission that used a rotary crank and pedals attached to the hub of the front wheel.  During the summer months of 1863 he built a prototype at the Paris carriage builder’s workshop.

It is thought that he may have collaborated with the Olivier Brothers around this time.  In 1865 Lallement moved to America where he gained the backing of an enthusiastic business man. James Carroll funded the patent application for his invention in April 1866.

The patent for Lallement’s pedal bicycle was granted in November of the same year. Lallement and Carroll failed to find a manufacturer to put this pedal powered velocipede into commercial production.

The final contender and mostly widely recognized is that of the father and son carriage builders Pierre and Earnest Michaux. Most history books acknowledge the two Frenchmen as the inventors of the bicycle. There is compelling evidence that they had built a prototype of their pedal powered “velocipede” as early as 1864.

Whether or not they actually invented the first bicycle is not really known but they are credited with inventing the first pedal and crank system. There is suspicion that the bicycle they created was taken from the earlier collaboration with Pierre Lallement and the Olivier Brothers. The Michaux Company began producing bicycles on a commercial basis and became the first established manufacturer. 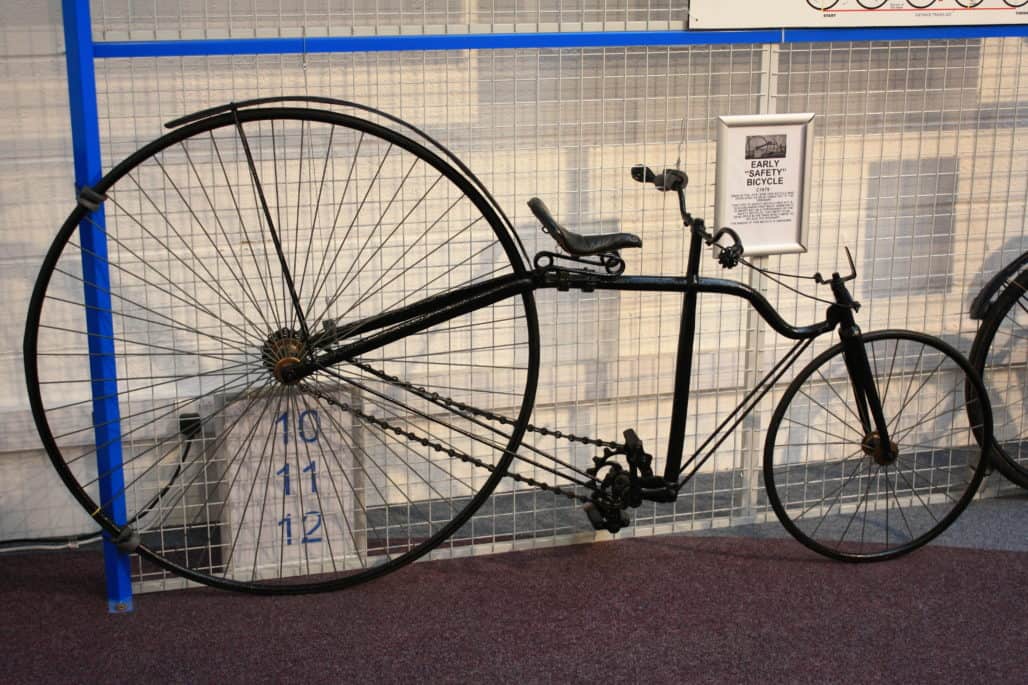 The next innovation was the high wheel bicycle, also known as the penny-farthing. The name was a comparison of the wheel sizes to the largest and smallest coins in circulation at that time. It was the first machine to be invented that was actually called a “bicycle”.

The penny-farthing was the first really efficient bicycle and despite it being very expensive, was extremely popular. The high wheel bicycle was a definite improvement on the boneshakers and velocipedes of the past but it was still a dangerous and difficult machine to ride. It later became known as the “ordinary” when the new “safety bicycle” was invented.

In 1885, John Kemp Starley introduced to the world the bicycle that we recognize today. Starley proudly named it and promoted it as the “Rover Safety Bicycle”. This gradually brought about the demise of the high wheel, penny-farthing or ordinary bicycle. The “safety” was a far superior machine in almost every way imaginable, but most of all it was much faster and obviously as the name suggests, safer to ride.

The “safety” had a triangular (Diamond) frame, equal sized wheels and a roller-chain driven rear wheel using sprockets. Throughout the 1890’s continual improvements and accessories helped to fashion a time retrospectively described as “the golden age of bicycles”.

See also
What Is The Lifespan Of A New Ebike?

Improvements included the introduction of pneumatic tyres devised by John Boyd Dunlop. A freewheel system allowed the rider to coast whilst not pedaling. Cable pull brakes and gears all added to the vastly improved comfort and safety of the modern bicycle. In fact the bicycle has continued to gradually evolve to this day.

In several regions of the world the bicycle is the principal form of transport. It is used in several different ways including work, recreation, fitness and sport. As a utility vehicle it is used for commuting to work, college and schools. Bicycles are also used for carrying out important duties such as postal, paramedic, police and military services.

As the world faces ever increasing uncertainty, with climate change, economic crisis and rising fuel and food costs, many are turning to the bicycle once again, in the hope that it can provide the answers.