Quickdraws: A to Z Reference Guide for Climbers 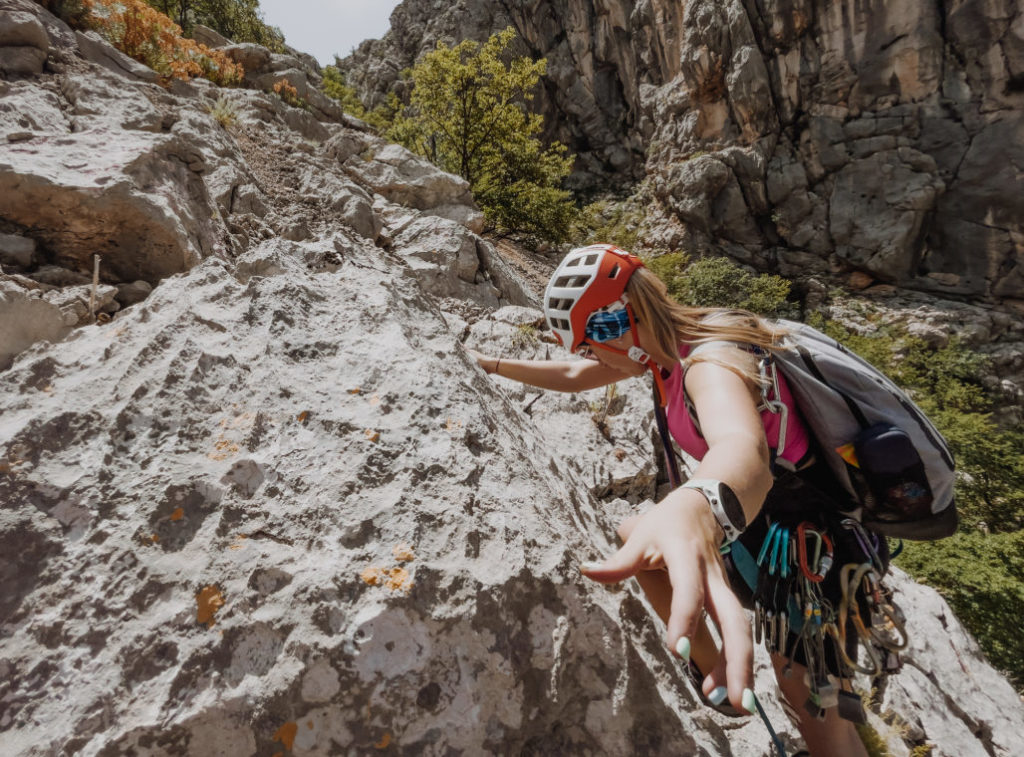 When moving from top rope climbing to lead climbing, like sport, alpine, or trad climbing, there is a jump (pun intended) in the type of gear you need. The most noticeable change is how you connect your rope while moving vertically. Instead of a top anchor feeding the rope between you and your belayer, you are in charge of connecting the rope to pieces of protection along the route using quickdraws.

What are Quickdraws? I’m glad you asked.

Quickdraws are two carabiners joined by a semi-stiff webbing called a dogbone. The bolt end carabiner connects to a piece of protection on the rock or wall, and the rope end carabiner holds the rope nearest your tie-in knot, but more on that later. Quickdraws vary in lengths for different purposes, types and shapes of carabiner gates, sizes, and weights.

Also, there are right and wrong (also read: dangerous) ways to clip into quickdraws. Quickdraws can be used both indoor at climbing walls and outdoors on natural rocks. For this reference guide, “rock” will refer to anything climbable, whether indoor or outdoor.

Sound confusing? No worries. I’ll walk you through commonly used words, phrases, and need-to-know information about quickdraws, so you’ll feel like a pro in no time!

Back clipping is improper rope placement that can be very dangerous. When clipping, the rope should come from the belayer through backside of the carabiner (closest to the rock) and move upwards on the front side. If a rope is back clipped, a fall could force the gate open and create an unnecessarily longer fall. To prevent back clipping, remember the rope should move up, out, and away from the rock.

Carabiners are oblong metal rings (see: “Metals”) with a spring-loaded gate that snaps or screws shut; for our purposes on quickdraws, they snap shut. Quickdraws have two carabiners, a rope end that has a rubber keeper, and bolt end that attaches to the piece of protection in the rock. The rope end sometimes has a different colored gate for quick reference! The safest way to orient your quickdraw is with both carabiners’ gates facing the same direction.

Clipping quickdraws specifically refer to the rope end carabiner connection, but it is important to ensure the quickdraw is first clipped into the piece of protection in the rock. There are two clipping techniques: the pinch clip and the snap clip. The technique you use is determined by the direction of the gate and which hand you’re using.

Take a look at the video here for a clipping demonstration.

Once you understand the techniques, memorize this chart so while climbing you know the proper method.

A dogbone is the semi-stiff webbing between the carabiners made of either light and skinny ultra-high-moledcular-weight (UHMW) polyethylene like Dyneema, Dynex, and Spectra, or heavy and thick sewn nylon or polyester webbing. The bolt end is looser along the dogbone to allow the quickdraw to rotate with you as you ascend, whereas the rope end is stiff thanks to the rubber keeper. The keeper orients and secures the carabiner to ensure it can’t flip and the rope won’t land incorrectly on the gate, possibly pushing it open.

Gates are the spring-loaded, moveable, locking side on a carabiner. For quickdraws, gates come in two styles, solid or wire, and two shapes, straight or bent. You’re likely familiar with solid gates which have the same structure and material as the rest of the carabiner. They are more likely to be keylocking and therefore easier to clip.

Wiregates are a thinner metal making them lighter and better for alpine climbing. Although less likely to be non-keylocking, they are actually safer than solid gates! The light weight reduces gate flutter; that is the slight opening and closing of a gate during a fall.

See also
How to Become a Rock Climbing Guide (All you Need To Know!)

Straight and bent shaped gates are optimal in their own spots. Straight gates are better for the bolt end of quickdraws but can be used on both ends for budget-friendly gear. Bent gates are optimal on the rope end to make clipping easier as the curved shape helps guide the rope into the carabiner. However, bent gates can be more expensive, so while nice to have, they aren’t a necessity.

Keylocking carabiners are preferred by sport climbers, because they are easier to unhook from your harness or piece of protection. Some carabiners have a hook or notch on the nose (the point a gate closes to) where the bar on a gate settles to help keep it closed. Others have a flat nose, and those are keylocking. Because keylocking carabiners don’t have a hook, they are less likely to get snagged and leave you hanging while clipping and unclipping.

Lead climbing is a style of climbing based on rope set up, as opposed to a specific discipline, where the climber clips in the rope as they travel up the route. Sport climbing, alpine climbing, and trad climbing are disciplines that use lead climbing and therefore quickdraws.

Quickdraw lengths generally range from 10-25 centimeters, but extendable quickdraws can be up to 60cm. It’s recommended to have a variety of lengths to accommodate different needs on the route like edges or overhangs.

Carabiners come in two types of metals: aluminum and steel. Most carabiners are made from aluminum, since they are lighter compared to the more durable steel carabiners. However, both are strong and will uphold longer than the dogbone (see “Retiring”). Steel carabiners are best for top roping or the first lead climbing quickdraw, since it can sustain more wear from the rope.

See also
How To Increase Grip Strength For Rock Climbing

Pieces of protection refer to any piece of equipment placed securely into the rock to be able to clip into. Angers, bolts (and hangers), cams, hexes, and nuts are some examples of protection. Protection can be broken down further into active and passive protection, differentiated by having moving or non-moving parts.

For you speedy readers, let me recap. Quickdraws are two carabiners connected by sturdy webbing (see “Dogbone”) used in lead climbing to connect the climber’s rope to the rock. There is a bolt end and easily identified rope end thanks to the rubber keeper and occasional different colored gated.

Nothing lasts forever, and the same is true for climbing equipment. Regularly inspect both carabiners and dogbone of your quickdraw. Look for chips, cracks, and deep grooves from rope wear on the carabiners and large frays, runs, and sun bleaching on the dogbone. As a rule of thumb, UHMW products should be replaced every 3 years and nylon or polyester products replaced very 5 years (see “Dogbone”).

Carabiner size refers to the distance between the nose and fully extended gate called the gate opening. The less distance of the gate opening, the smaller the size, and therefore the harder to clip. For all my big hand friends who can easily palm a basketball, the small quickdraws might not be your best friend.

Carabiners sold by nearly all major equipment companies must pass CE and UIAA  strength standards. Each carabiner is tested in three ways: lengthwise (across the major axis), sideways (across the minor axis), and force lengthwise with the gate open. Remember, a closed gate carabiner has 3 times more strength than a carabiner with the gate ajar. If you’re interested, most carabiners have all three test numbers listed on it.

See also
Tips for Getting Started in Climbing: Everything You Need to Know When You want to Start Climbing

The weight of a quickdraw comes from the carabiner material and size and dogbone material. Alpine climbers greatly consider weight when choosing their quickdraws, whereas sport climbers focus on other aspects like keylocking carabiners (see “Keylocking”).

Z-clipping happens when the rope is pulled from under the previous quickdraw and clipped into the current quickdraw. When tightened, the rope forms a “Z” shape and creates drag that prevents or significantly hinders climbing, so it will be quick to notice and fix.

While this covers a lot of information, and there is a video for reference, nothing will prepare you better for climbing than learning firsthand from an instructor. Then practice, practice, practice. Climbing in any capacity can be dangerous, but lead climbing can increase that risk if you aren’t properly prepared.

Before climbing there are many mitigations you can take. Ensure you have the proper equipment, and it fits correctly, like harnesses, helmets, and in this case, quickdraws.  The safest way to use a quickdraw is for both carabiner gates to face the same direction and opposite the direction of the route. That way the rope runs along the strongest part of the carabiner called the spine, a fancy name for the solid, non-gate side.

Also, practice clipping with both hands while on the ground, so it is muscle memory on the climb.

As mentioned, try mock lead climbs with two trusted belayers to experience lead climbing without risking big falls right out of the gate. Don’t be afraid to start with easy routes as you are learning.

Experiment with different length quickdraws and types of carabiner gates to find what works best for you. The more comfortable you are with your equipment, the safer you can be and more fun you will have.

Until next time, on belay, friends! 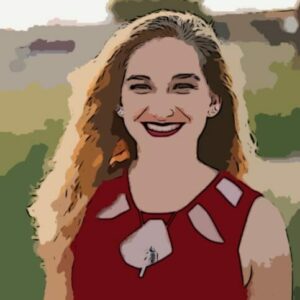 I’m Em, a writer, climber, and sports enthusiast. I grew up playing and watching team sports, so rock climbing modified my mentality. Instead of competing against others for a clear-cut win, I was competing against myself to be a better athlete than I was the day before. With the help of amazing friends, I quickly became hooked on pushing myself mentally and physically, amazed by what I could accomplish. The mentality shift overflowed into helping others learn and grow self-confidence in their own capabilities. I became a rock wall instructor to encourage new and veteran students alike to hit their limit and then reach a little further. In combining two passions of mine, teaching rock climbing and writing, I always hope each story encourages you to try something new, expand your knowledge, think critically, and reach higher than you ever thought possible. On belay, my friends. I believe in you.

Tips for Getting Started in Climbing: Everything You Need to Know When You want to Start Climbing

How to Train to Be a Rock Climber (Simple Tips!)

How To Increase Grip Strength For Rock Climbing

How to Become a Rock Climbing Guide (All you Need To Know!)