What To Look For In a Dive Mask (Helpful Guide!) 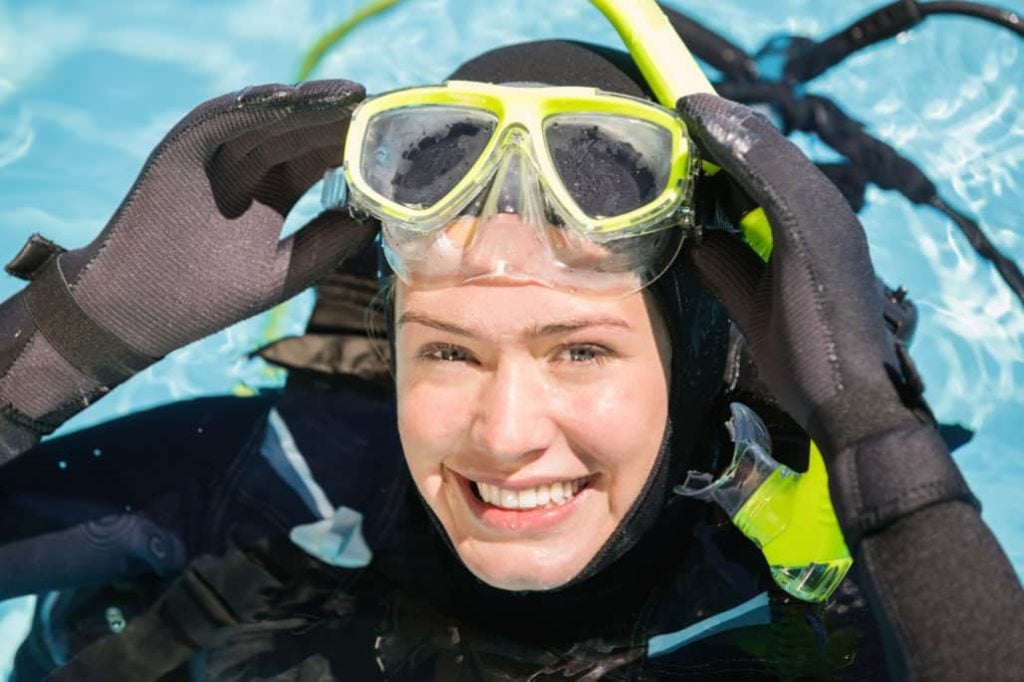 A high-quality mask will enable safety as you will be able to clearly see hand signals from your diving buddy and read gauges when going for a dive. Remember that scuba masks and snorkeler masks are two different diving gears. You have to determine first what type of diving activity are you going for to ensure that you also get the right types of scuba diving masks or snorkel masks. Is this your first time to purchase a dive mask? What should be your criteria for a dive mask? 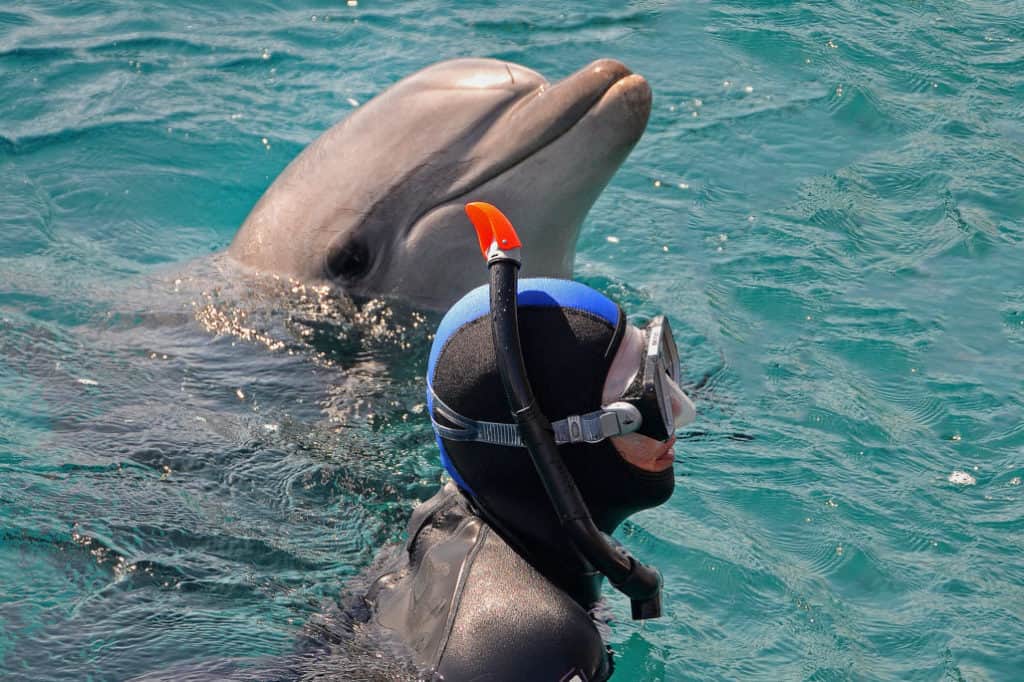 After you’ve determined you’re going scuba diving, it is a must that you choose a dive mask rather than a snorkel mask. Here are some qualities to check out when going dive mask shopping:

Check if the mask is made from rubber or plastic. A good quality dive mask should be made from a silicone skirt and has tempered glass. These materials are specifically used when making low-volume masks for scuba diving.

A neoprene strap with velcro fasteners is also a good mask choice due to its easy-to-use feature. A neoprene mask strap also prevents hair from getting tangled as well as preventing hair pulling. Remember that mask straps help in making your face feel comfortable as you can easily adjust it to be tight or loose.

There are actually two popular choices when it comes to mask skirt color. A clear mask skirt will give the light a window to get in. However, black skirts are also a popular choice because they can reduce glare and movement distraction. This is why color should be carefully considered and multicolor options are mostly just to be in style.

Check if there is a built-in purge valve attached to the nose skirt. If it has this feature, mask clearing will be easier when water gets into your face or nose.

This is actually for additional options as not all divers choose this for their dive masks. Snorkels are useful if you are going for long surface swims. This way you can check first if the low-volume mask you are planning to buy comes with a snorkel or if you need to buy a separate one.

Dive masks undergo rigorous trials to make sure that safety is guaranteed. This is also to ensure divers that the right mask functions are delivered especially since dives at certain depths can pose risks. 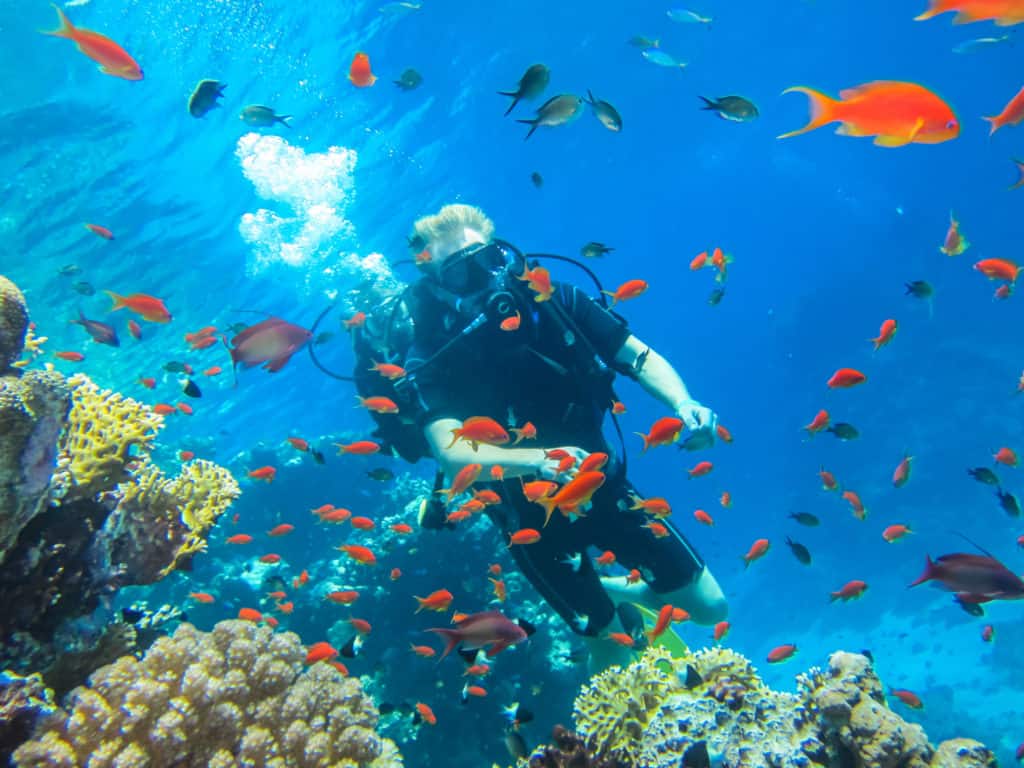 Always consider what type of dive you are in for. This is important as masks differ in terms of field of vision, glare resistance, and durability. There are also masks that are easy to carry especially for traveling divers. When you’re all set to visit a dive shop, remember the following points to consider before heading to pay for that scuba diving mask you’ve chosen. You can also ask customer service to guide you in your mask hunting.

An expensive mask does not always mean it is the best. Typically, dive masks will cost around  US$50.00 to as much as US$1,000. Price tags aren’t that important. You should always settle for quality instead of price and of course the comfort it brings when you put it on your face.

People have different facial features, head sizes, and nose shapes. Consider buying a mask that has a flexible nose pocket. Remember that your face and nose should have some space. This will allow one to equalize easily. In return, water will be prevented from entering under the nose. A snug fitting mask will also prevent panic in new divers and ensure that a safe and fun experience is achieved.

The number of mask lenses

To be able to choose the right mask, check for the number of mask lenses before deciding. This includes single mask lenses, two lenses, and multi-lens scuba diving masks available in the market today. Determine which lens masks best fit your needs. Both framed and frameless mask lenses are available so you can always find the best fitting mask. The single-lens mask is usually the best choice for those who want an uninterrupted view.

Dives with a mustache

Moustache divers need not worry to go for a dive. There will always be a mask that will fit them best without compromising their style choice. However, moustache divers need to be extra careful to get a good mask seal. In fact, they can prevent leaks by applying silicone grease to make the mask silicone skirt fit snugly and sealed around the face. Nowadays, options for soft silicone skirts are the best choices as well as full-face masks.

Choosing the right mask will ensure safety. It will also guarantee that the most common injuries when doing a scuba dive are prevented. In the next section of this article, we will be talking about what these are so you can keep yourself safe and prevent these from happening.

What is the Most Common Injury in Scuba Diving? 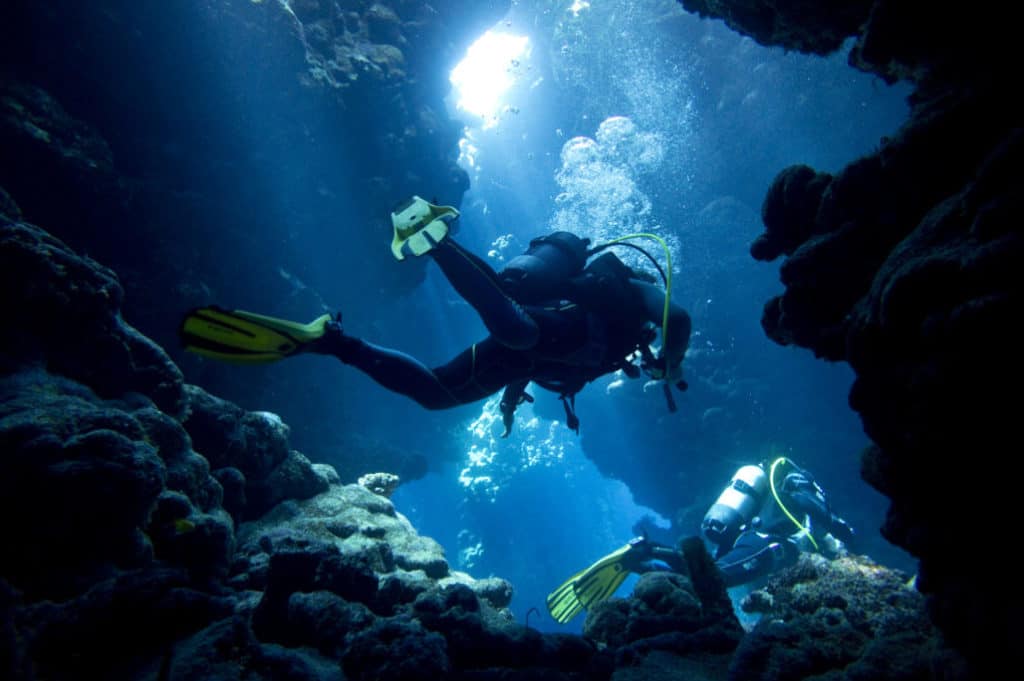 Scuba diving is considered an extreme sport because of the risk and danger associated with it. That’s the reason why equipment checks are important and having a dive buddy is recommended for the safety and security of the divers.

Following the rules is a must to avoid accidents. Although accidents are fairly rare, diving will be safe as long as you adhere to the safety rules of the sport and you wear a diving mask that fits. 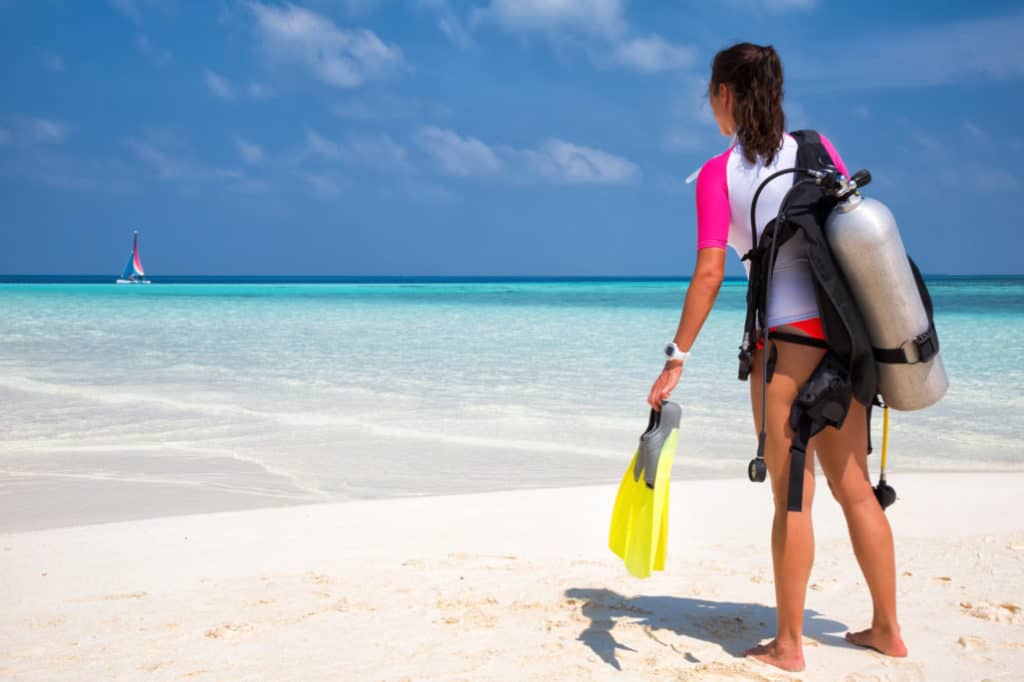 Listed below are some of the common injuries encountered when scuba diving. The last two on the list are the leading cause of a more serious accident while on a dive.

Unless threatened, most marine animals are considered harmless. Injuries received by the diver are mostly the result of defensive maneuvers or chance encounters with the wildlife.

Problems with the ear are fairly common even at the start of learning how to scuba dive. Ear pain or ear squeeze happens when the diver goes deeper underwater. There is an increased pressure in the outer environment and the middle ear is “squeezed” by the pressure of the water outside.

Meanwhile, ear barotrauma is the result when divers try to forcibly equalize their ears. It can hurt and temporarily damage them. Barotrauma is a tissue injury that can also affect the gastrointestinal tract, sinuses, lungs, eyes, nose, and even part of the face covered by the diving mask. Ascending very slowly and breathing in the process can help avoid this injury. Also, with your nostril pinched, try swallowing and yawning.

Otherwise known as “the bends”, decompression sickness is caused by the rapid decrease of the air or water pressure surrounding you. The body responds by absorbing more nitrogen in the tissues.

Compressed air in the tank used in diving is made up of extra oxygen and nitrogen. Your body uses oxygen, while the nitrogen is dissolved in your blood. When you ascend too quickly, the body has no chance to dissolve excess gas and the extra nitrogen can do potential harm to the body.

Serious health conditions can be a problem that can lead to fatal consequences. That is why divers should be examined well before diving. Some of the medical conditions that can cause problems while scuba diving includes lung disease of any form, fainting or blackouts, epilepsy seizures or convulsions, diabetes, recurrent ear problems, and bleeding or other blood disorders to name a few.

Panic is the number one cause of injury and even death to scuba divers. This case is actually preventable because the diver can survive any incident or injury had they not panicked.

Scuba divers almost always have at least one panic attack at some stage of diving that can potentially lead to serious injury or even death. It is important to stay calm and remember not to panic if things go wrong in order to keep the ability to think and use the tools you have to get out of the situation swiftly.

What Dive Mask Do Navy SEALS use? 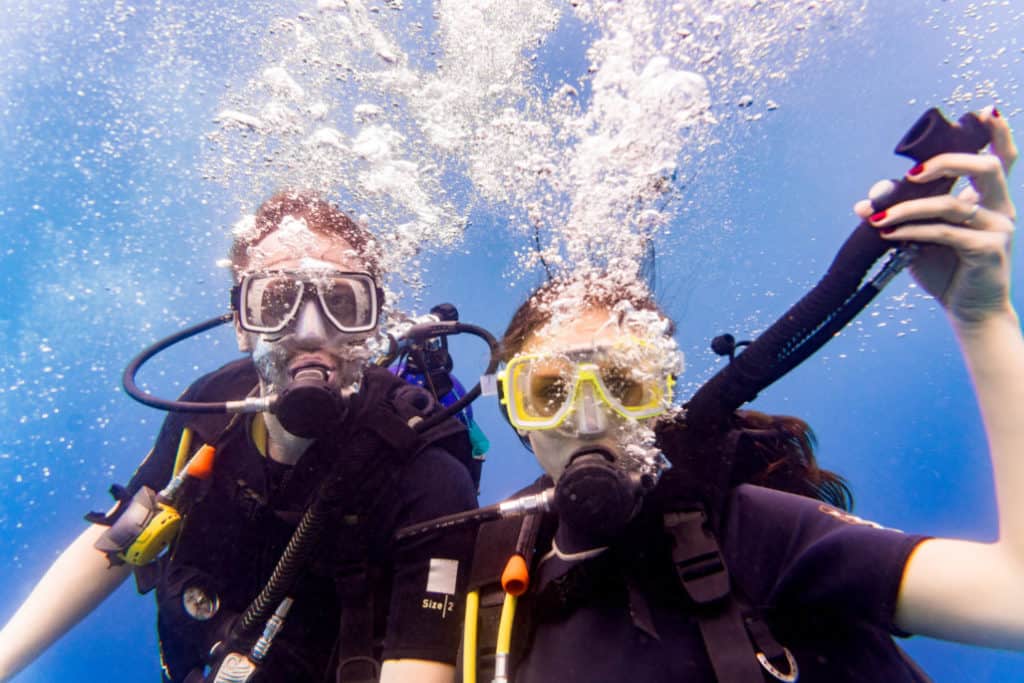 There are three main types of underwater breathing gears that the Navy Seals use. These are the open-circuit compressed air, a close circuit with 100% oxygen, and a closed-circuit containing mixed gas. Other Special Operations Forces that have amphibious capability also make use of these systems.

The SEALs and other special ops use an open circuit Self-contained Underwater Breather Apparatus or scuba. This type of underwater breathing gear consists of “Twin 80’s”, cylinders of compressed air, typically 2 aluminum cylinders holding 80 cubic feet of oxygen and the scuba diving mask. They are worn on the diver’s back. An open circuit system means the diver’s exhaled air is released on the water.

The Seal Delivery Vehicle Team may utilize the open circuit breathing system that is fed from tanks in swimmer delivery vehicles. The disadvantage of using the open-circuit system aside from the size and weight of the tanks is the presence of tell-tale bubbles that are released. These bubbles are visible to the naked eye which can indicate the SEAL’s location. This can also be detected through infrared devices.

For clandestine amphibious operations, the Navy SEALs uses the LAR V Draeger rebreather closed circuit scuba device. This can go for the maximum depth of 70 feet and runs on 100% oxygen with no bubbles visible to the naked eye when the breath is expelled. Instead, the exhaled air is recycled into the closed-circuit device that is capable of filtering carbon dioxide. This system eliminates the presence of air bubbles in the water that can give away the SEAL’s presence.

The LAR V Draeger rebreather can be used up to 70 feet deep diving and no further unlike the open circuit devices. This is ideal for shallow water operations. The unit is front-worn and smaller in size, which is ideal for this kind of diving because it is less bulky. The dive’s duration depends on the depth, water temperature, and oxygen consumption rate. Apart from the Navy Seals, other Special Operations Units like Special Forces Dive Teams, USMC Force recon and Division Recon uses the LAR V Draeger rebreather for diving.

If diving requires greater depths up to 1,800 feet, then the Close Circuit Mixed Gas Rebreather or MK 15 and MK 16 should be used. This diving device is capable of recycling the diver’s expelled breath and at the same time filter the CO2. It does not use pure oxygen like the Draeger, rather it has air gas as Timux or Helioxthat serves as a dilutant for the exhaled air. The resulting mixture maintains the partial pressure of the oxygen (PPO2) level. It uses bulkier equipment, which is ideal for greater depth dives rather than shallow dives.

What kind of scuba diving mask do Navy Seal Use and its features? 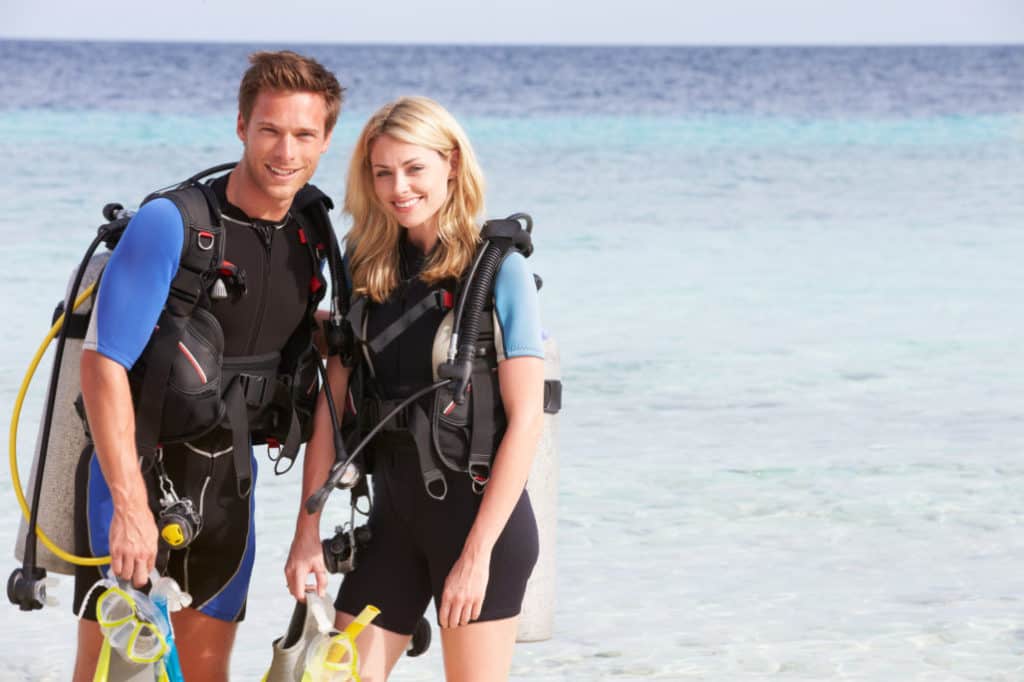 Navy Seals training can be intensive enough that they need to be a certified diver of 100-130 feet. Although they won’t normally be in extremely deep water for their work, they need these technical certifications on top of their training.

The mask matters when you are in the military. There’s the Aqua Lung Wraparound Mask (Military Version) made for use by the combat divers, USSOCOM, Navy SEALs, USMC ForceRecon, and other special operation units of the military. These masks have been in use for quite a while and still continue to be the choice of the military and even the Search and Rescue Department worldwide. This mask has been modified and modernized with newer skirt designs for a much-improved fit and uses a non-reflective stainless steel frame.

Here are some of the Navy Seal mask features that you may be interested in.

Ultimate Review of the Best Scuba Drysuits in 2022

How to Become a Scuba Diving Instructor (Simple Guide!)

How To Choose The Best Floating Water Mat (Simple Guide!)

How To Get Certified For Scuba Diving (Simple Guide!)