How To Make Sinon For Cosplay 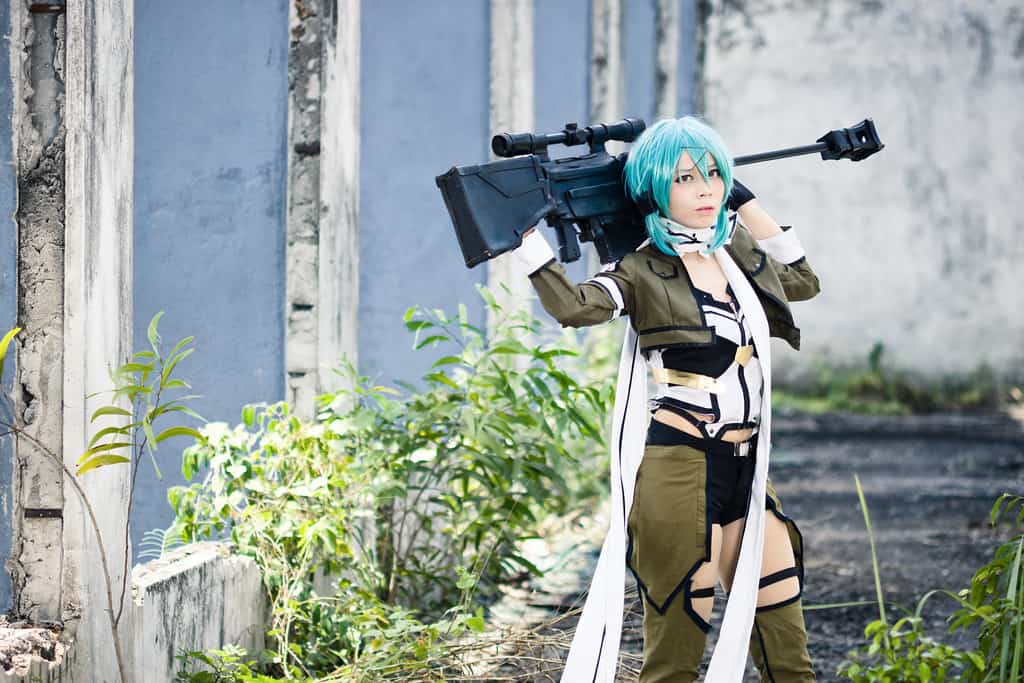 Have you ever wondered why in the Sword Art Online anime world, Shino Asada, whose avatar is Sinon, seems to be on par with Asuna Yukuya and Kirito Kiriga when it comes to popularity?

Even though the two are the main characters, Shino has become a favorite not only due to her interesting backstory and character arc but also because of her distinctive costumes, which is why Sword Art Online fans love her. In this article, we’ll show you how to make the Sinon cosplay of the Sword Art Online game.

First off, what’s Sinon’s story and what made her the way she is? Shino Asada first made her appearance on Sword Art Online II Phantom Bullet, appeared in the succeeding series called Gun Gale Online, went on to appear in Alfheim Online, and was featured in the film with the title of Ordinal Scale.

The unique beauty of the manga and game is the quality of her backstory, wherein she feared guns as a child but was brave enough to conquer it. She did improve by playing Gun Gale Online.

How Do I Make Sinon Cosplay From Sword Art Online? 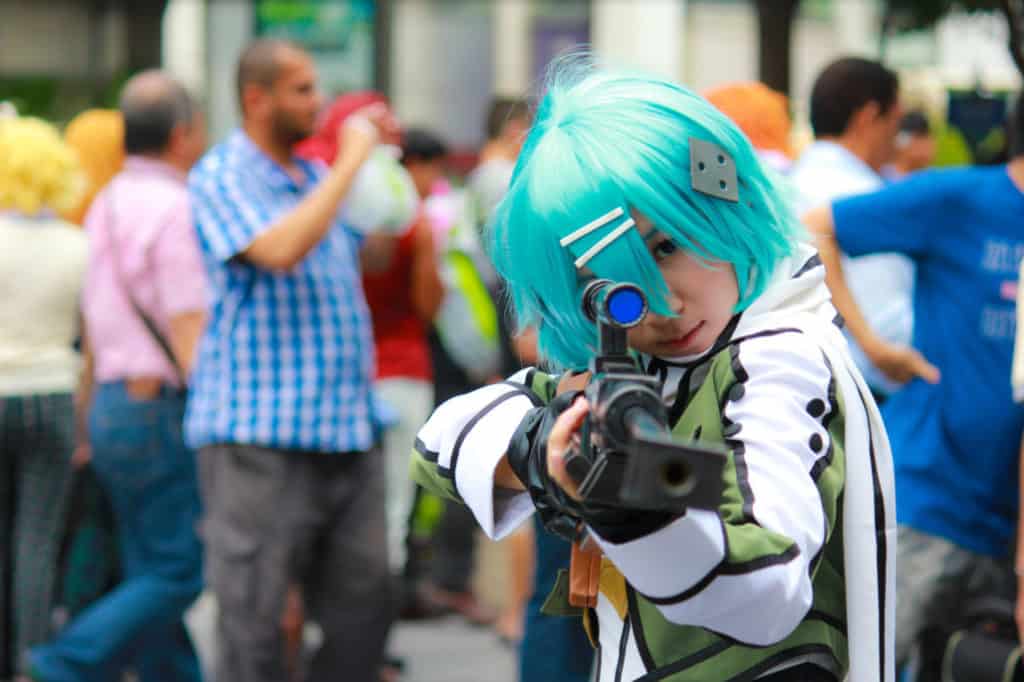 For costume play, you have several recommendations to choose from: Shino Gun Gale, Sinon ALfheim, and ALO Asada Shino. Other cosplayers choose other versions of the character such as the cafe maid, school girl, and Halloween versions, to mention some that come up in search results.

Asada’s appearance and her accompanying weapon, whether it’s a gun or the arrow, depends on what video game or anime she’s in. In Gun Gale Online and ALfheim Online, Shino has blue hair while she sports black hair in Ordinal Scale.

But she would also sometimes be in the Caith Sith race, where she has things like blue ears that are similar to a cat’s and she has a tail, a sign that the character was given different avatar attires.

What Does The Shino Asada Attire Consist Of?

Do the cat ears fascinate you? Well then, you’ll definitely feel comfy in the ALO Ashada Shino costume. If you purchase a set online, you’ll get the Shino shirt, short black shorts with a tail attached, a coat, a cape, stockings, and accessories. As for the shoes and the weapons, you may need to purchase them separately.

A sniper with great marksmanship skills, Shino is an expert in handling guns and bows and arrows. In Gun Gale Online and Ordinal Scale, she is never parted from her firearm. In ALfheim Online, its bows and arrows, with her bow even having a name: Light Bow Shekinah. 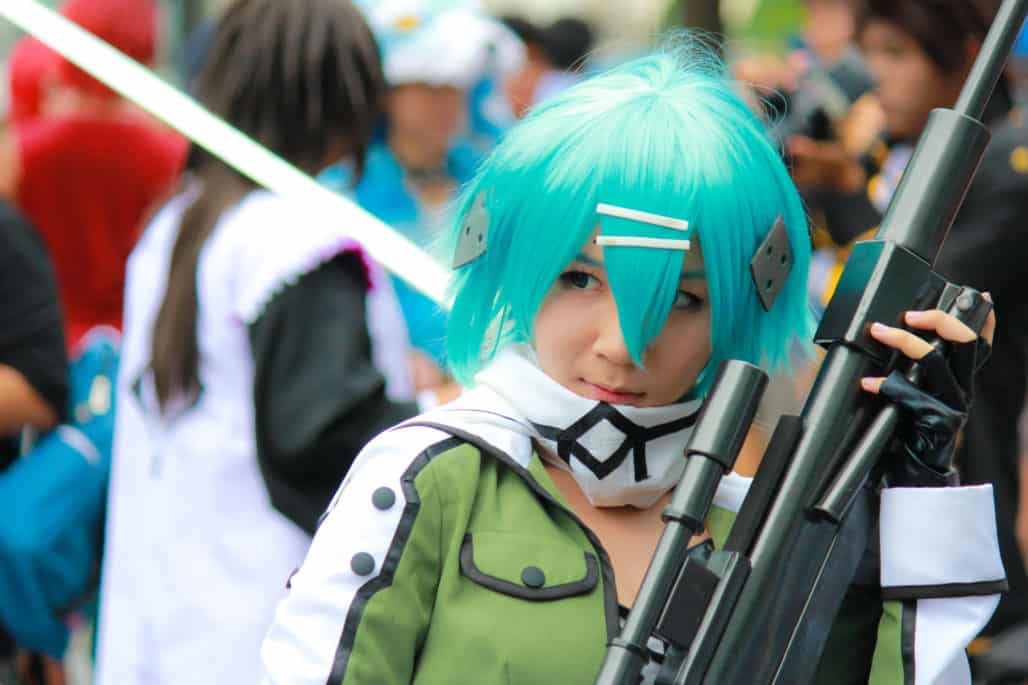 Apparently, Shino is unlike most other characters who only have a single quality attire. The ALfheim Sinon avatar comes out when she plays ALfheim Online with Kirito and his friends. To cosplay her, you’ll need the jacket, tube top, shorts, pants, neck band, scarf, belt, and gloves. You’ll also need to wear her trademark cat ears, a long sidebow, and a longbow.

Does the gun-wielding, rifle-toting Sinon character fascinate you? If so, then the Gun Gale Sinon version would fit you perfectly. Imagine being Sinon walking around in a sexy outfit yet lugging a big sniper rifle.

This Asada Shino cosplay includes a jumpsuit, coat, trousers, headdress, scarf, collar, belt, leg belts, and gloves. Accessories like buckle, buttons or lace may be included in the purchase. Other accessories include a short wig, the Sinon GGO costume, black combat boots, and a prop gun.

How About The School Girl Sinon Cosplay? 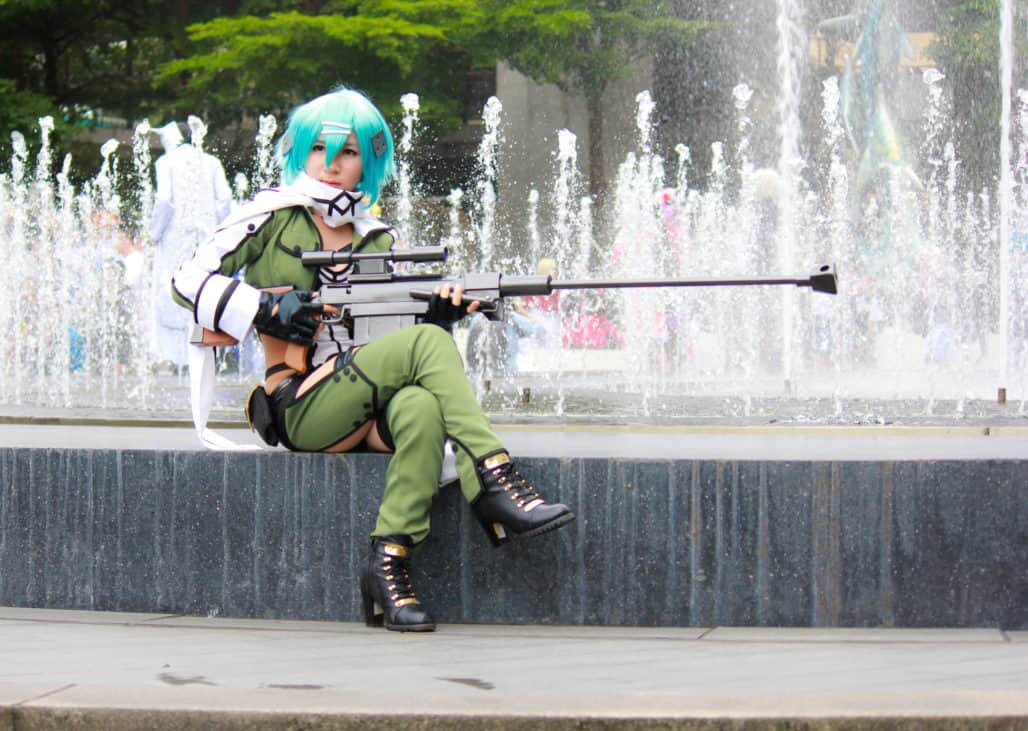 Do you want a cool cosplay Shino option? Why not try the School Girl Sinon, which features a simpler school girl look like what Shino wears in Gun Gale Online?

Choose a black and teal school girl uniform paired with black knee-high socks and black closed shoes. For the hair, you can have a blue wig styled a bit differently or you can put it in pigtails.

Is The Maid Version Sinon Cosplay A Good Choice?

Does the maid costume play interest you? Then, you’ll welcome the Sinon blue wig, white hairpiece, and striped above-knee skirt.

Add to those a white French maid apron, and green-striped tights. The maid Shino character is particularly popular in Japan anime conventions.

Would you go for a black-haired Sinon cosplay in military settings? Then, you might find it interesting to cosplay Ordinal Scale Sinon, with the green Augma uniform highlighted by a thick black vertical stripe on the middle, knee-length black stockings, and military boots.

A prop sniper rifle and a pair of clear glasses complete the getup.

How Can I Make A Sword Art Online Sinon Cosplay DIY? 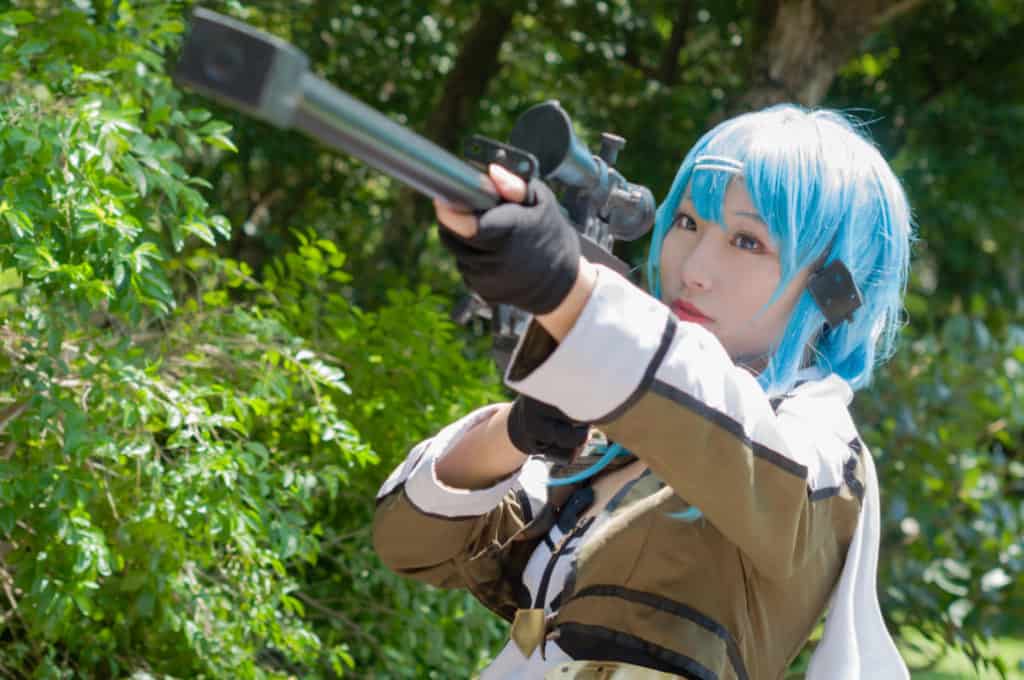 Do you possess advanced sewing skills? If you do, you’ll definitely need them if you decide to create your very own Shino costume from scratch. If you do a search on social media sites like YouTube and Facebook, you’ll find from the collected relevant results a list of tutorial video content, which are often peppered with ads, about Shino cosplay DIY.

If you watch the content, you’ll be amazed by the details that the cosplayer works on to get the elegant battle outfit right. The Sinon costume requires that you sew several parts: the body, the vest, the shorts, and the pants.

If you search and go through some video content and ads, you’ll find some cosplayers use a cling wrap and strong tape to get a mold of their upper torso, which they then use as basis to sew the body of the attire.

The DIY process for making the Shino outfit basically involves things like taking body measurements, multiple tracing on fabric, and cutting them according to design. Then, the sewing part begins, wherein all cut pieces are sewn together, all items attached and secured.

When there’s no need to review nor improve the quality, the process of making the cosplay DIY is complete. 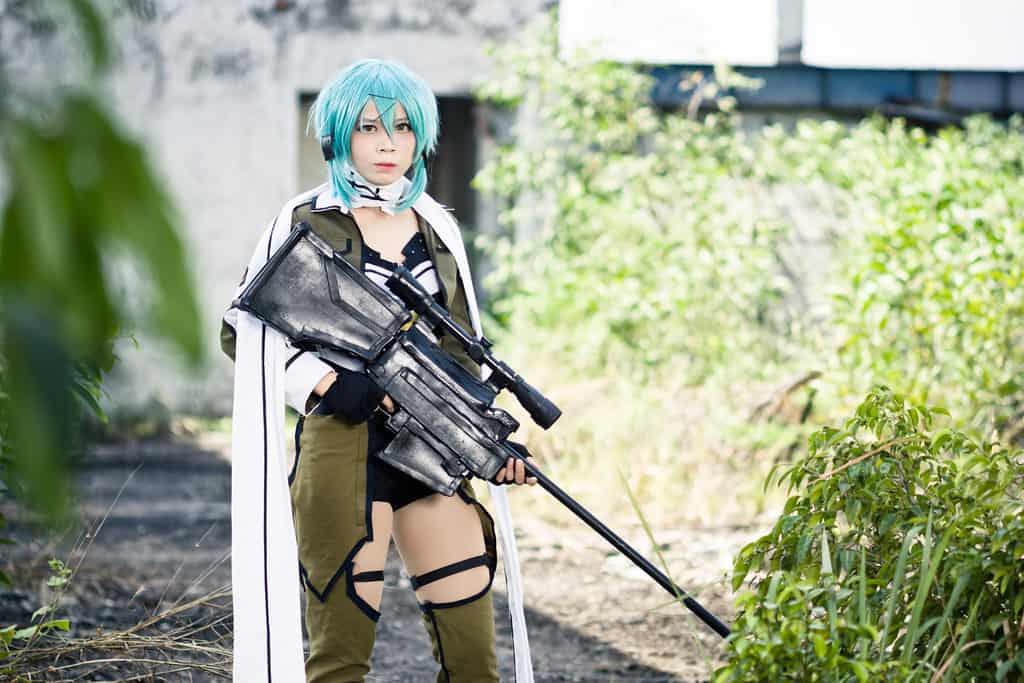 Now that you have a good idea on how to cosplay Shino Asada from Sword Art Online game, what cool character would you choose? This part may be a bit confusing because all her costumes are not only elegant and complex but are also well-designed. Your choice would surely be based on your personal preference and style.

Recommendations from other cosplayers about the best Sinon attire to cosplay hold great value because they understand the process. Whether you prefer to have an online seller deliver the costume to your house or you wish to create one yourself, is entirely up to you. No matter what Sinon character you’ll agree to cosplay, the bottom line is you will definitely enjoy it.

How To Make Realistic Cosplay Armor – Without Breaking a Sweat!

How To Make Moving Wings For Cosplay

How To Make Rabbit Ears For Cosplay (Simple Steps!)

How To Make Nine Tails For Cosplay – A Quick Guide

How To Make Persona 5 Joker For Cosplay