How Much Does a Crab Boat Cost? 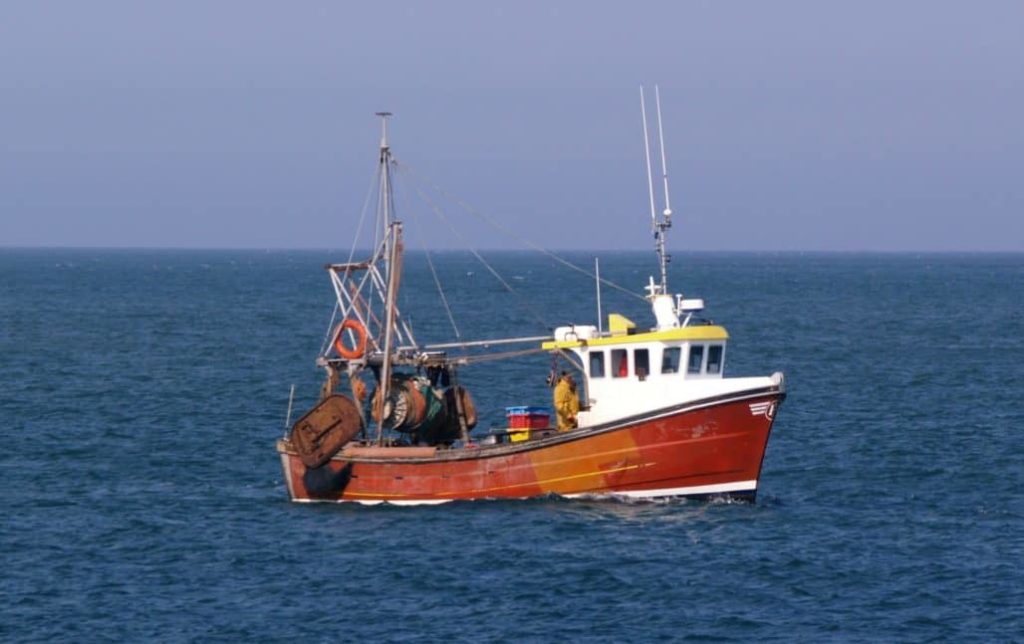 Are you a fan of the Deadliest Catch Reality TV Series? You might have watched in wonder how hard the crab fishermen work in the incredibly dangerous Alaskan waters.

It’s not surprising that crab boats are some of the most powerful and robust vessels you’ll find on the water.

These boats have courageous captains like Sig Hansen, Johnathan Hillstrand, and Keith Colburn, who are willing to handle whatever the ocean throws to them.

But you might wonder, exactly how much does a crab boat cost? Well, I have always wondered the same whenever I watch the Deadliest Catch series.

So, I decided to do some research on how much crab boats cost, and I’ll share my findings with you in this article.

You might think that all you need to delve into the crab fishing business is a good boat and a great captain, but this isn’t the case.

There are many other costs involved in the industry, from fishing license to crab pots and deckhand salaries. Plus the thousands of dollars needed to maintain the boat.

If you want to know exactly how much a crab fishing boat costs, continue reading to find out!

How Much Does a Large Commercial Crab Boat Cost? 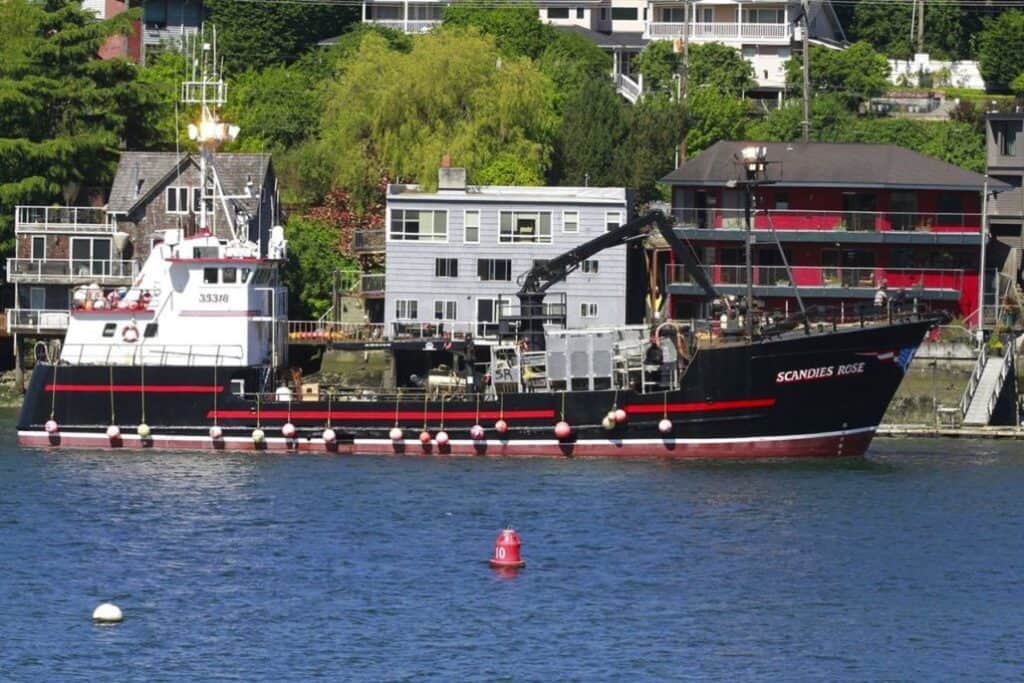 A large commercial crab boat may cost a few million dollars to construct.

Most of the crab boats you see on the Deadliest Catch TV series are a bit old, with some being completed about 30 to 50 years ago.

If I was to approximate, the price of the crab boats in the TV show could range between 2 to 3 million dollars.

Medium sized crab boats can cost anywhere from $300,000 to a million dollars or more.

How Much Do Small Crab Boats Cost? 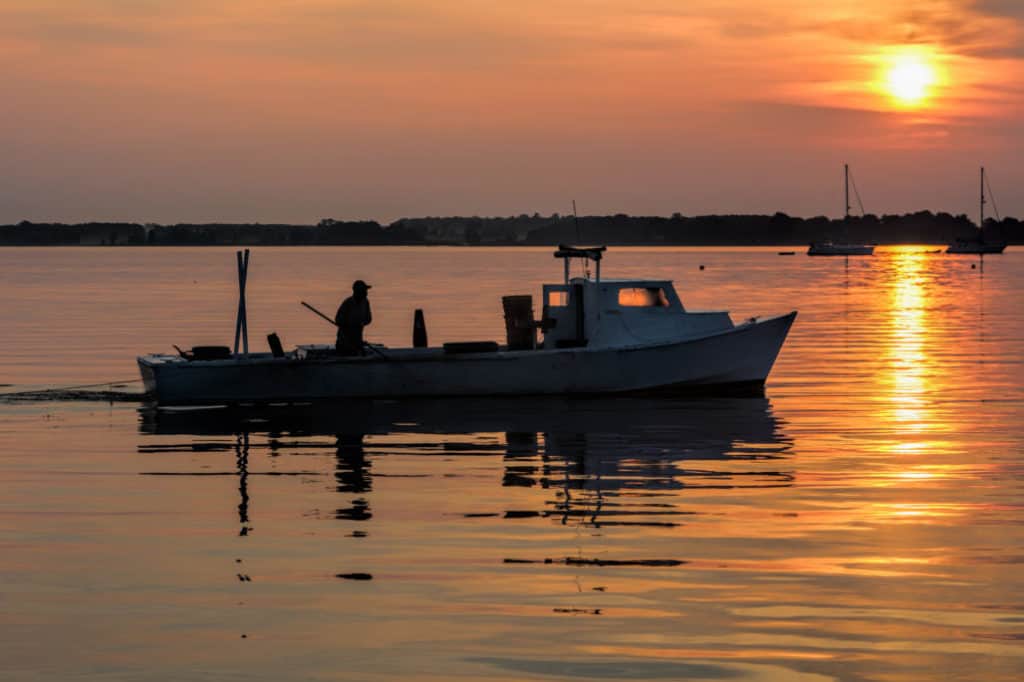 But what if you want a new or smaller boat to catch crabs in other places other than Bering sea? Well, things may be a bit different in such cases.

If you want to catch crabs in other places like Maryland, you may not need to invest lots of money to get a robust or huge boat like those you see on the Deadliest Catch Tv series.

Keep in mind that the vessels in Dutch harbor have extremely sturdy gears, which make them very expensive.

I’d suggest that you work with a boat builder who can make the exact type of crab boat you need.

But before you hire a boat builder, it’s important to know the components of a crab boat and the use of each of them. This will ensure that you get the size and construction that best suits your needs.

What to Consider When Buying a Crab Boat 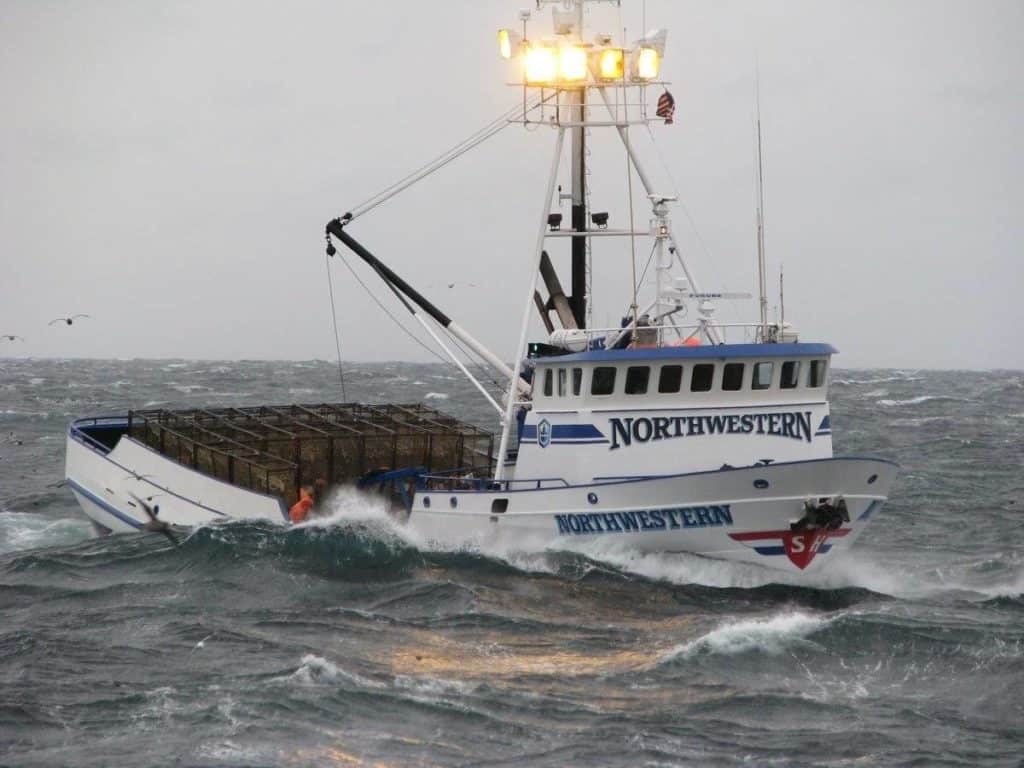 While crabbing boats feature some components found in typical recreational boats and yachts, they hold a lot of gear to support the whole fishing crew throughout the cruise.

Here are some of the most important things to keep in mind when buying a crab boat and how they affect the cost:

The electronic systems in crab boats are essential for the vessel’s productivity and safety of the crew. They also ensure that the crab fishing boat remains legal.

One of these crucial safety pieces is the automatic identification system that lets the boat remain visible on the locator displays of the big ships.

With this system, the crab boats are safe from being hit by other ships and larger vessels on the water since it’s visible from about 15 to 20 miles.

It also allows the fishing boat to cruise with ease in dark or foggy areas.

And while this electronic system is vital, it can cost up to $5,000 or more when you add the installation fees.

Another critical system that every crab fishing boat should have is the Loran C system. This system keeps the boat’s bearing and helps in finding the crab pots’ locations.

They have become pretty accurate and help the captain locate the pots and get as near as just a hundred feet of their location.

There are other boats that use the newer global positioning system instead, as they are highly effective and easy to use. However, this comes at an extra cost.

Other electronic systems you might find in a crab fishing boat include satellite equipment, radios, and internet tools.

The crab boat captain will also need depth finders to know where the ocean floor is, and whether it’s a hard or soft floor.

This is because the crab pots sit on the sea bottom, where they are easily attainable to the various types of crabs.

As you can see, all this equipment is costly and needs adequate protection within the wheelhouse. The wheelhouse also must be waterproof to ensure that all the systems run efficiently. 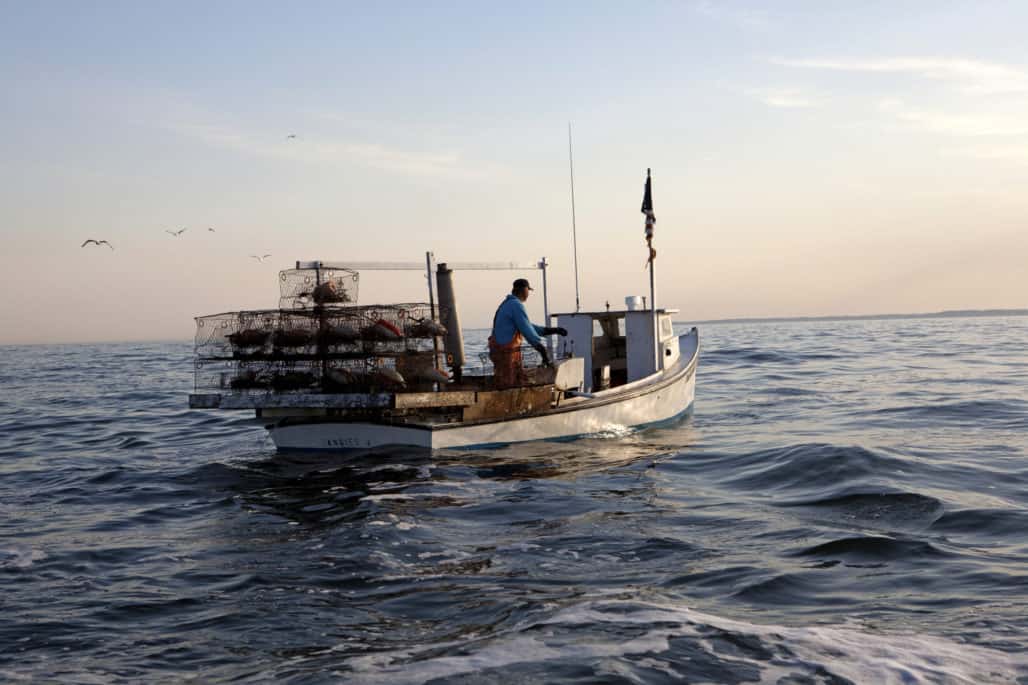 The lift system is a significant part of the equipment that makes crab boats fit for catching crabs. It allows the crew to get many pounds of crabs caught in the pots out of the water.

These lift systems use sturdy materials to withstand the heavy work and extreme sea conditions like salt water and freezing temperatures.

These pots must be sturdy enough to carry hundreds of pounds of trapped crabs while still holding up to the sea forces.

Medium-size crab pots can cost several hundred dollars, while the larger ones may cost up to a thousand dollars or more.

A crab-sorting table allows the fishermen to easily separate the crabs that can be sold from those that cannot go to the food market.

The tables are usually made of steel and aluminum, which are great materials that can withstand the harsh conditions of the ocean.

They also have hydraulics featured in them, which can be pretty expensive as well. You may find that even a small-sized sorting table costs more than $20,000.

These aren’t very expensive, but you might end up spending thousands of dollars since your crew will need lots of them to get the job done.

Once you catch crabs, you are supposed to keep them alive for food safety.

Most large boats can hold up to 200,000 king crabs and keep them alive throughout the cruise.

As with most equipment in crab boats, live tanks are also quite expensive, and each of them can cost thousands of dollars.

While crab boats are no luxury boats, the crew needs a place to stay and rest after long working hours.

Captains usually have their own quarters while the rest of the crew stay in the stateroom. About for people can live in one boat’s room.

The boat galley should have adequate storage space to carry sufficient food for the whole crabbing crew. It should also have the kitchen essentials like ovens, microwaves, stoves, refrigerators, and freezers. 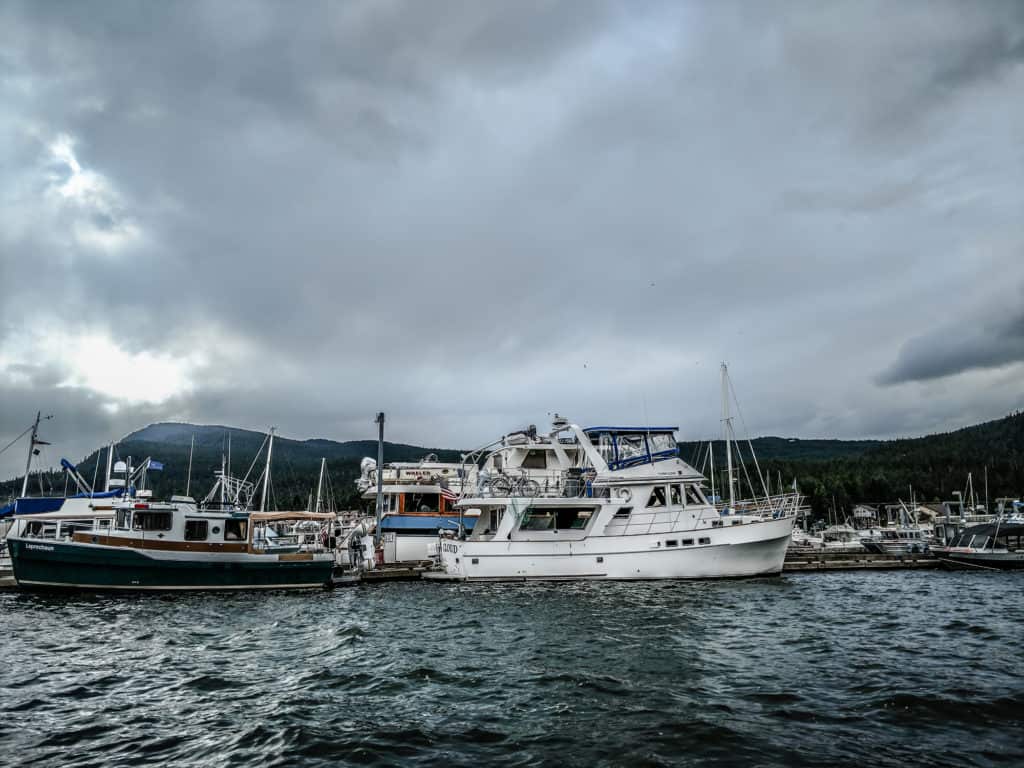 Q: How Much Does a Crab Ship Cost?

Q: How Much Money Does a Crab Boat Owner Make?

Life on the Bering Sea isn’t an easy experience, but the king crab fishermen make some good profits within a short time.

The fishing season usually lasts four months, from October to January. During these months, most crab species are at their largest size and highest population.

This means that the crab fishermen can make more income working on other fishing fleets in their time off.

Other crew members who are also usually busy working in the boat throughout the fishing season also make good money.

According to the Alaska Fishing Employment Center, deckhands can make anywhere from $20,000 to $50,000 every season in the king crab fishing industry.

Q: How Much Does a Crab Boat Make in Season

A: The amount of money crab boats make in a season varies widely, depending on a number of factors like the fishing location, crab sizes, and weight.

Crab boats in the Alaska king crab fishing industry make the most money as they catch big and heavy crustaceans even though they do it in life threatening situations.

Crab species differ in weight and size, with the Red king crabs being the biggest and heaviest of all. Each red king crab usually weighs between 6 to 10 pounds.

The current price is $5.22 per pound, which means that the king crab fishermen could make anywhere from $31 to $52 with every king crab they catch.

Q: Who Has the Most Expensive Boat on Deadliest Catch?

A: It’s not clear who has the most expensive boat on Deadliest Catch, but there are several large-sized and incredibly pricey boats featured on the reality show.

Built in 1978, the Fierce Allegiance is the largest boat featured on the Deadliest Catch TV Show. It’s a 4 Million dollar vessel with a length of about 166 feet. 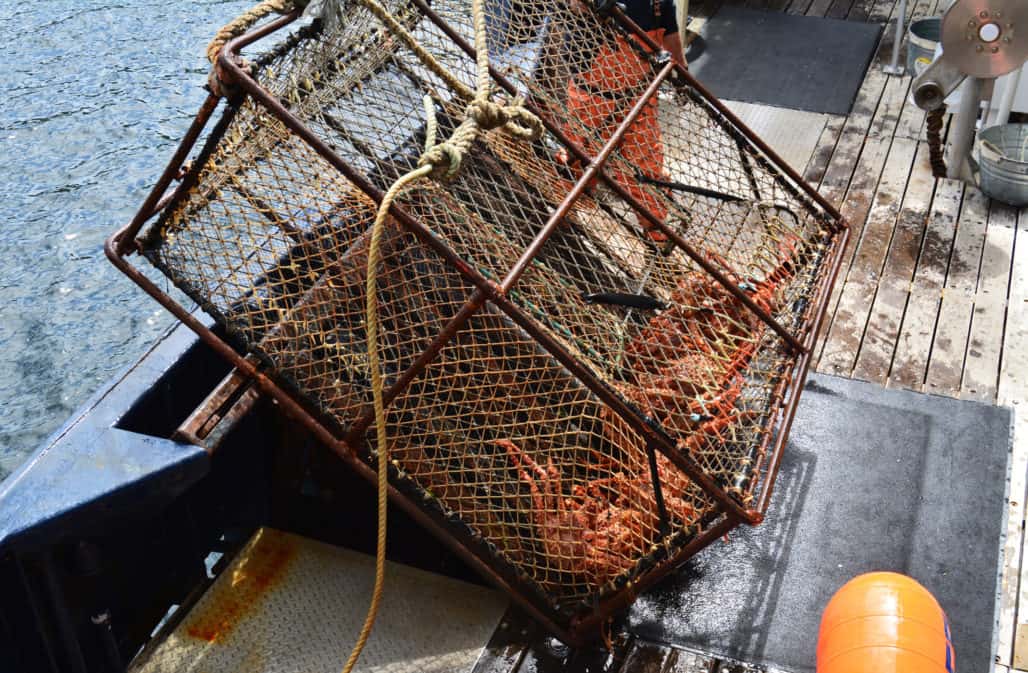 The Fierce Allegiance has a great carrying capacity as it can carry up to 650 tons (DWT). Its fuel tanks can take 65,000 gallons or 295, 496 liters of diesel. However, it was only featured in season one of the Deadliest Catch.

There are other boats with top-notch captains who catch lots of crabs, making their boats more profitable than most extra-large crabbing vessels on the Bering Sea.

This includes the Northwestern crab boat, run by captain Sig Hansen and his brother, with daughter Mandy Hansen as the relief captain.

And while it can carry up to 250 pots, the Northwestern usually does not exceed 195 crab pots for each trip.

The Northwestern is of the most successful ships in the Alaska king crab fishing fleet and has won several titles over the years, including price and tonnage titles.

It’s actually the only crab boat featured on Deadliest Catch with the same captain since the show started.

Another highly valuable crab boat featured on Deadliest Catch and is worth mentioning is the FV Wizard, owned and operated by Keith Colburn.

Q: Which Boat is the Smallest on Deadliest Catch?

A: The Lucky Lady is the smallest king crab fishing boat featured on the crabbing reality show. At 58 feet, the Lucky Lady is still an efficient vessel like any other boat on the show.

Other smaller crab boats include the Lisa Marie, which measures 78 feet, and Western Viking, measuring 86 feet.

Q: Did the F/V Saga Sink on Deadliest Catch?

A: No, the F/V Saga did not sink on the Deadliest Catch TV Show. However, it could sink in the future, considering the fact that it sails on risky waters to catch crabs.

Any crab fishing boat featured on Deadliest Catch cruises through dangerous water in the Bering Sea which exposes them to the risk of sinking anytime.

Q: How Much Do Commercial Fishing Boats Cost?

A: Commercial fishing boats’ prices usually range from $10,000 to $50,000 or more for premium brands like Grady-White and Boston Whaler.

If you want an affordable fishing boat, you can consider buying from low cost brands like Tidewater and Sea Hunt. 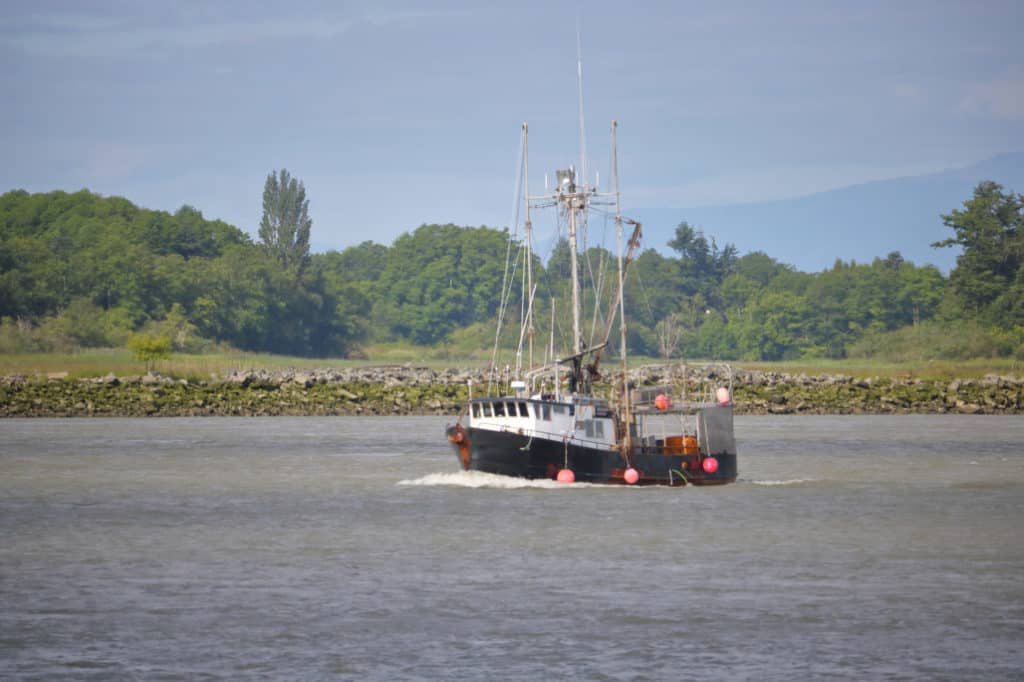 Crab boats are among the most expensive vessels you’ll find on the water, and it has not been easy researching the costs.

I think it all comes down to your specific needs, like the size you want and the type of waters you want to fish in.

Most commercial crabbing boats featured on Deadliest Catch will obviously not cost thousands of dollars but range into millions.

But if all you want is a small boat measuring 30 feet or less, you can get one or have a vessel builder make one for you at about $100,000.

How to Clean Pontoons on a Trailer – The Easy Way!

How to Remove Water Spots from Pontoon – Without A Fuss!

How to Mount Flag on Pontoon Boat (Easy Than You Think!)

How to Make a Floating Foam Pad Mat (The Easy Way!)

How to Keep Seagulls Off Boat Canopy Lift Covers