Azodin Blitz 3 Review – Worth A Shot! 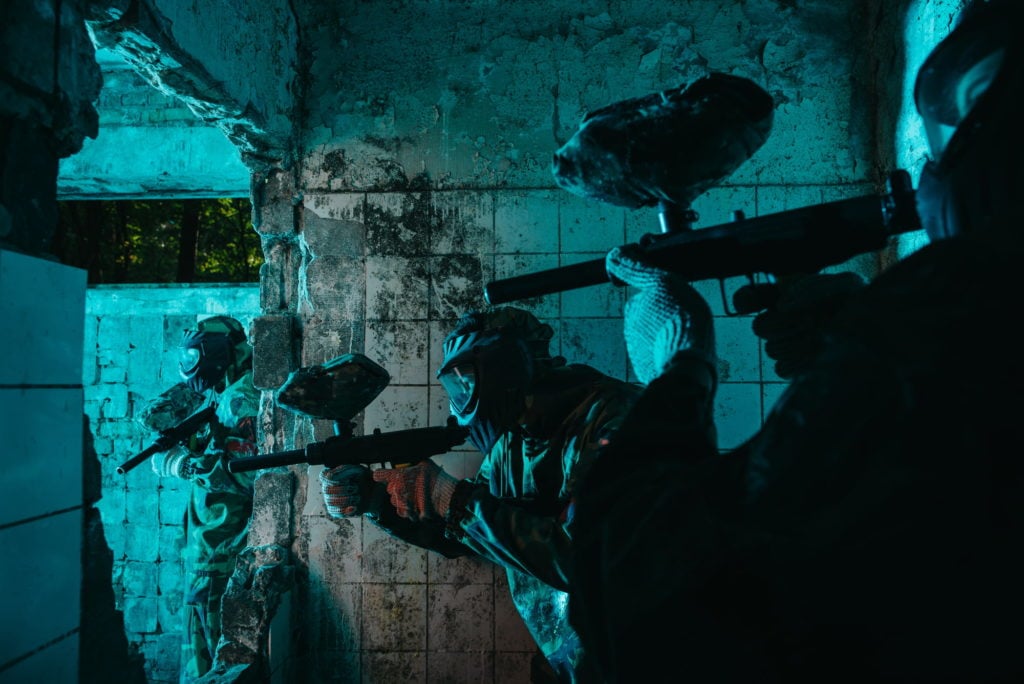 Looking for the best beginner-friendly paintball gun in the market? Then you must consider the Azodin Blitz 3. This is dubbed as the perfect entry-level marker with all the features and design that will make you look like a pro. It’s highly efficient and very reliable so you won’t have to worry about being embarrassed by your gun.

As a beginner, all the talk about markers might feel overwhelming. Don’t worry, with the Azodin Blitz 3, nothing will be too overwhelming because Azodin made sure that it’s not intimidating for beginners. Even if you ask around, everyone will tell you that the Azodin Blitz 3 is the kind of marker you want to start with. So, what are you waiting for?

Unless you do your research, you won’t hear the Azodin brand as much from your peers. Why? It’s because the company is relatively new to the paintball industry. They aren’t the likes of Tippmann and Planet Eclipse, so you can consider them as newbies.

But the big however there is that, they aren’t newbies as makers of paintball guns. Anyone who has an Azodin marker can attest to how advanced and efficient this gun is. It can even be compared to the most popular entry-level markers. That tells you that Azodin takes their job very seriously when it comes to designing and engineering the best paintball guns.

On top of that, Azodin is known for entry-level markers. Their line of guns is popular with beginners because they’re affordable, lightweight, and easy to understand. They’re also easy to maintain and Azodin makes sure that all their markers don’t even need a lot of maintenance. Of all their products, the most popular are the Kaos and Blitz series.

A Quick View of the Azodin Blitz 3 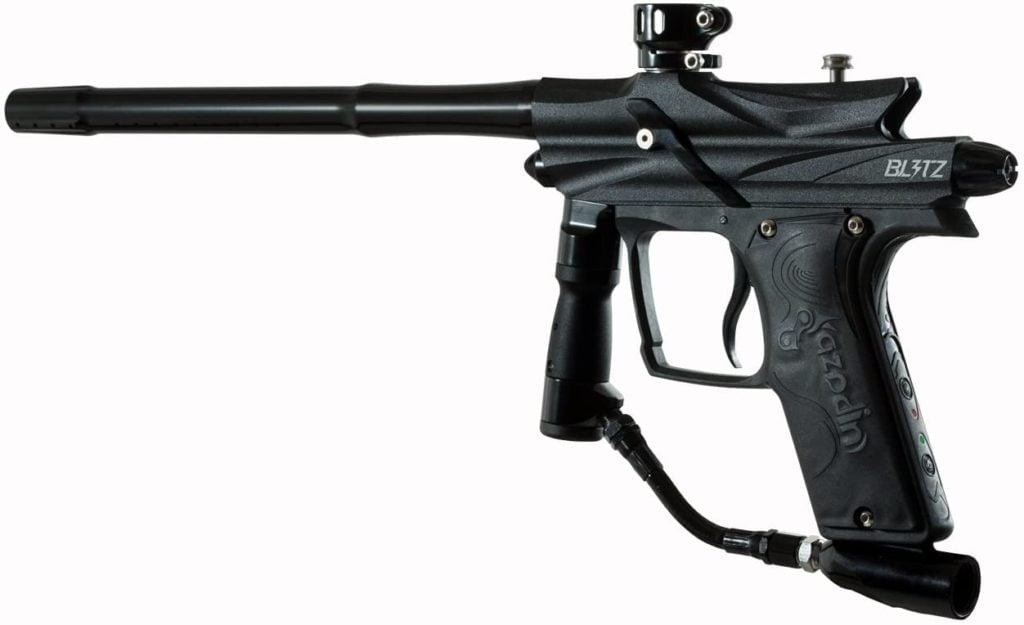 The Azodin Blitz 3 is the best marker for when you want to own a paintball gun but don’t want to spend a lot of money. Whether you’re not sure you love paintball yet or you’re just getting started with this kind of outdoor game, you’ll find the Azodin Blitz 3 to be reasonably priced.

You might be thinking that most, if not all, affordable markers are low-quality. This doesn’t apply to the Azodin Blitz 3. For one thing, this gun is very efficient in using gas. You won’t worry about running out of gas even after you take your first 500 shots. Other entry-level markers can’t do that. And that’s just the tip of the iceberg.

The Azodin Blitz 3 is also very light. It’s made for people (not just beginners) who don’t like carrying a huge paintball gun around the arena. If you aren’t used to these kinds of equipment, then the lightweight and compact design of the Azodin Blitz 3 are welcome features. It won’t be long before you fall in love with this marker.

Features of the Azodin Blitz 3 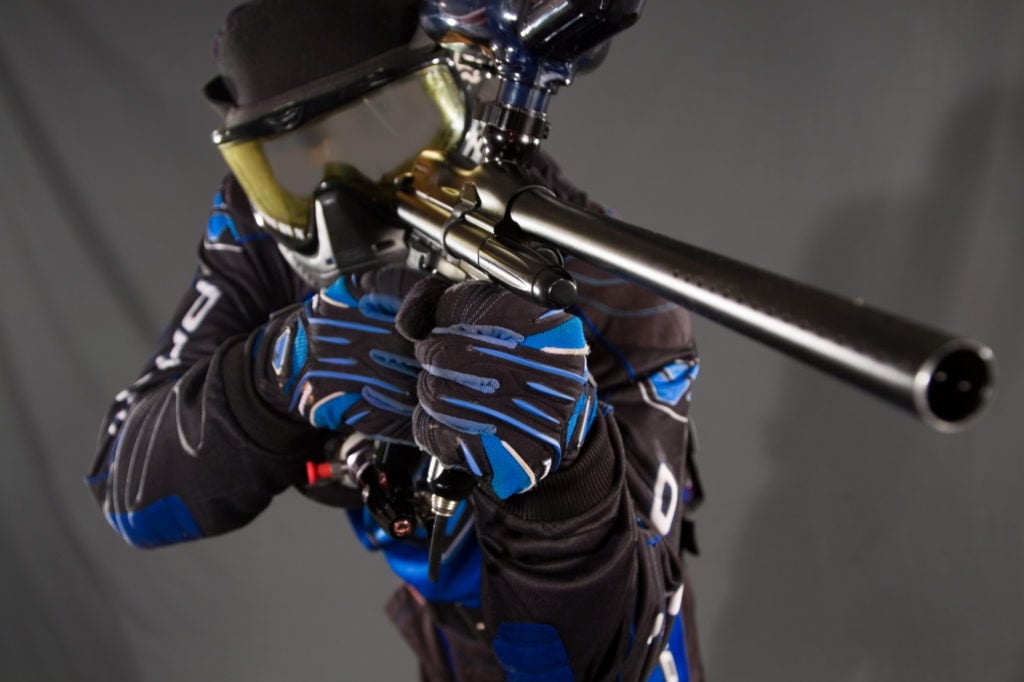 Both the steel and nylon frame will be perfect for beginners because they don’t break easily. This combination of materials works well to keep the gun intact even when you roll around, run, hide, or get hit. This marker will last a few years before you see signs of wear.

As an entry-level marker, Azodin made sure that the design solves the main pain points of beginners. A lot of new paintball players complain about guns being too bulky and uncomfortable to carry around. With the Azodin Blitz 3, you will barely remember that you’re carrying a powerful weapon in paintball.

At just 2.03 pounds, the Azodin Blitz 3 is easy to carry even when you’re running. Its weight was achieved by using nylon as the main reinforcement material and by removing unnecessary parts of the gun. The only downside is that the Azodin Blitz 3 is a bare marker that you can customize later on.

Speaking of customizations, the Azodin Blitz 3 is ready to be modified. As a bare paintball gun, you are free to do whatever you want with it – from changing its barrel to adding a silencer to lessen the noise the gun creates whenever you make a shot. You’ll be happy to know that there are also a number of upgrades and modifications available to suit your taste and playing style.

Since the Azodin Blitz 3 allows modifications, you can turn this entry-level marker into a gun that is worthy of being part of tournaments. With the right accessories, you’ll be able to transform this marker into the paintball gun of your dreams.

The all-new feather regulator can be found in the Azodin Blitz 3. Unlike the Blitz 1 and 2 which used an inline regulator, Blitz 3 uses a piston that allows you to use both CO2 and HPA (compressed air). To give you an idea, not a lot of markers, let alone electronic ones, are compatible with both kinds of air.

Thanks to the feather regulator on the Azodin Blitz 3, you have the flexibility to try both CO2 and HPA. This gives a lot of room for you to figure out if you prefer CO2 over HPA during your games.

What is the Zen Board? The Zen Board is Azodin’s name for its circuit board. Although there’s not a lot of difference with the circuit board of Blitz 1 and 2, the improvement made on the Blitz 3 was focused more on ease of use. The new Zen Board now has some color that will allow you to see the buttons that you’re pressing. The buttons were also redesigned so it’s easier to press. They’re even more noticeable than before.

Pros and Cons of the Azodin Blitz 3 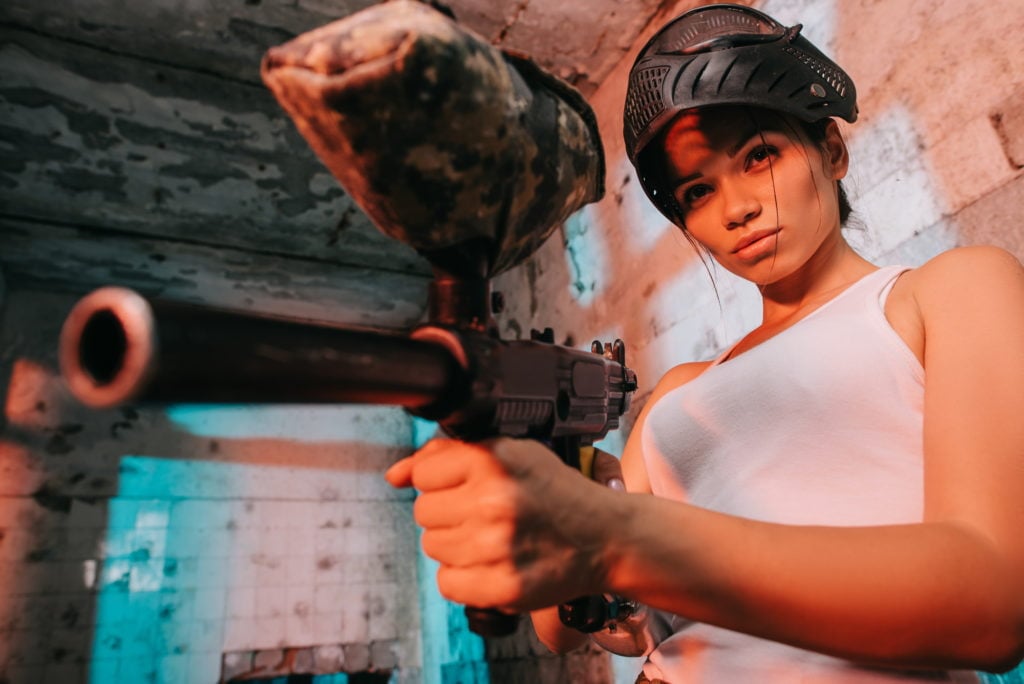 They say that the Azodin Blitz 3 is the perfect entry-level marker, but is it truly perfect? Read on to know more about its strengths and flaws.

The best thing about the Azodin Blitz 3 is that it’s easy to use. This is the battle cry of Azodin ever since they started making entry-level markers. Fortunately, they excel in making their paintball guns so beginner-friendly that no one would feel intimidated with how it works. As a beginner, you won’t go through a learning curve with this paintball gun.

Worried that you’re not strong enough to carry heavy guns? The Azodin Blitz 3 has your back. At just 2.03 pounds, you can easily run around without the marker weighing you down. Even teenagers will find this gun so light. Thanks to the materials used, you won’t feel like you’re about to carry some weights whenever you try to point and shoot.

As mentioned earlier, the Azodin Blitz 3 is compatible with both HPA and CO2. Does that matter? Yes, it does. Usually, beginners don’t know which one they prefer so it’s better to give them the option to decide. Eventually, you’ll realize that you’re more comfortable with one over the other.

For an entry-level marker, the already has four firing modes. Most guns only have 2-3. These firing modes will be helpful when you change the kind of paintball game you play or when you just want to play a little differently. It’s also easy to change the firing mode because you can simply press the button corresponding to it on the Zen Board.

The Azodin Blitz 3 is known for its efficient use of gas. It’s very impressive considering that Azodin isn’t known for efficiency. Yet, the Azodin Blitz 3 proves that even beginner markers can blow you away. An efficient marker is something you’ll need if you often play paintball games that last for hours.

And lastly, the Azodin Blitz 3 is very affordable. It’s less than $200 so it’s perfect for anyone who doesn’t want to invest in a paintball marker that costs so much. This paintball gun is the best deal even for those intermediate players who just want to focus on buying accessories and would rather have a “basic” marker that they can customize to their liking.

If you plan on playing a sniper, you will be disappointed with the Azodin Blitz 3. Unfortunately, this marker makes a loud sound whenever it shoots a paintball. The sound is loud enough to give your position away. You can improve this with an accessory, but that would only mean that you have to shell out money.

There have been several complaints that the Azodin Blitz 3 has factory defects. Some buyers had to contend with leaks or damaged parts when they received the item. It’s a good thing that the paintball gun comes with 1-year warranty because this can be very troublesome especially when it’s just brand new and you already have some issues.

Another downside to the Azodin Blitz 3 is the trigger. The trigger works well but it’s not as smooth as you want it to be. You would have to make a few adjustments but as a beginner, this is difficult to do. This could be a good improvement for the next Blitz version.

While everyone has their own preferences in design, it wouldn’t hurt Azodin to make the Blitz 3 a little more sophisticated. However, as you will see, the marker doesn’t look anything different than your generic paintball gun found in arenas. This encourages people to just buy a bunch of accessories and modifications just to make the marker look more serious and robust. Of course, if you’re saving money, you would just have to contend with its original design.

How Does the Azodin Blitz 3 Compare with Other Paintball Markers? 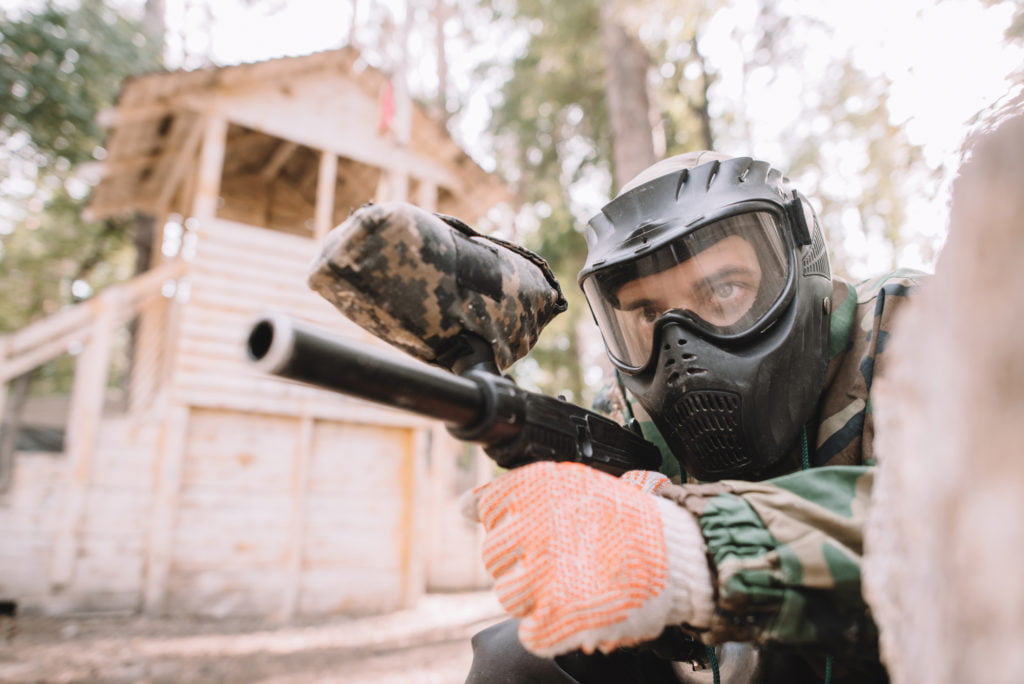 With so many entry-level paintball guns in the market, it’s hard to know which one is the best. In all honesty, the Azodin Blitz 3 is closely tied with the Tippmann Cronus because of its reliability, durability, and affordability. The two are often close competitors since they’re both known to be great entry-level markers.

However, when it comes to the price and efficiency, the Azodin Blitz 3 wins over the Tippmann Cronus. The former is very conservative with the use of its gas that you won’t notice that you’ve been using the same gas tank for more than a few games already. This is what impresses a lot of beginners and intermediate players.

When it comes to the quality of the marker, the Azodin Blitz 3 fairs relatively better than its competitors. Thanks to the materials and the design done by Azodin, this paintball gun can last for a long time. You can say that it’s the better version of the Blitz 1 and 2 that would survive until you become an intermediate player. 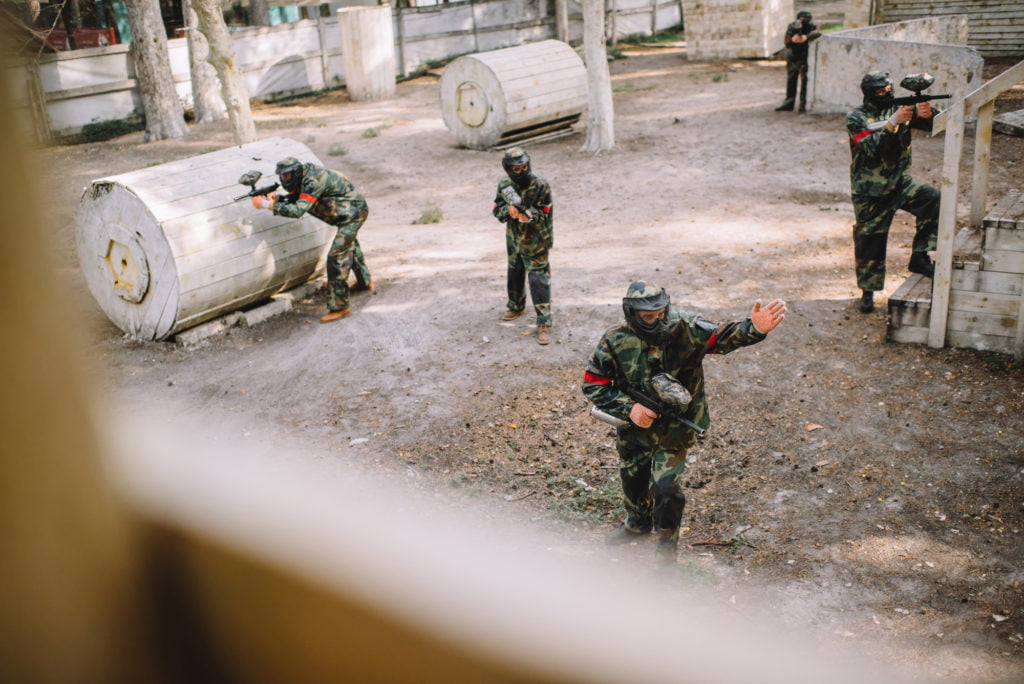 With all that was said, the Azodin Blitz 3 still proves to be a reliable paintball gun in its price range. It has all the features you need to start your paintball journey. It’s also efficient and durable, so you can expect to use it for the next few years unless you want to move to a mid-range marker.

However, the Azodin Blitz 3 is not as perfect as people think it is. Because of some defects and trigger issues upon delivery, it can give you a few inconveniences. If you don’t mind the hassle of getting your paintball gun replaced, then you can still consider the Azodin Blitz 3 as a good contender for your very first paintball gun.