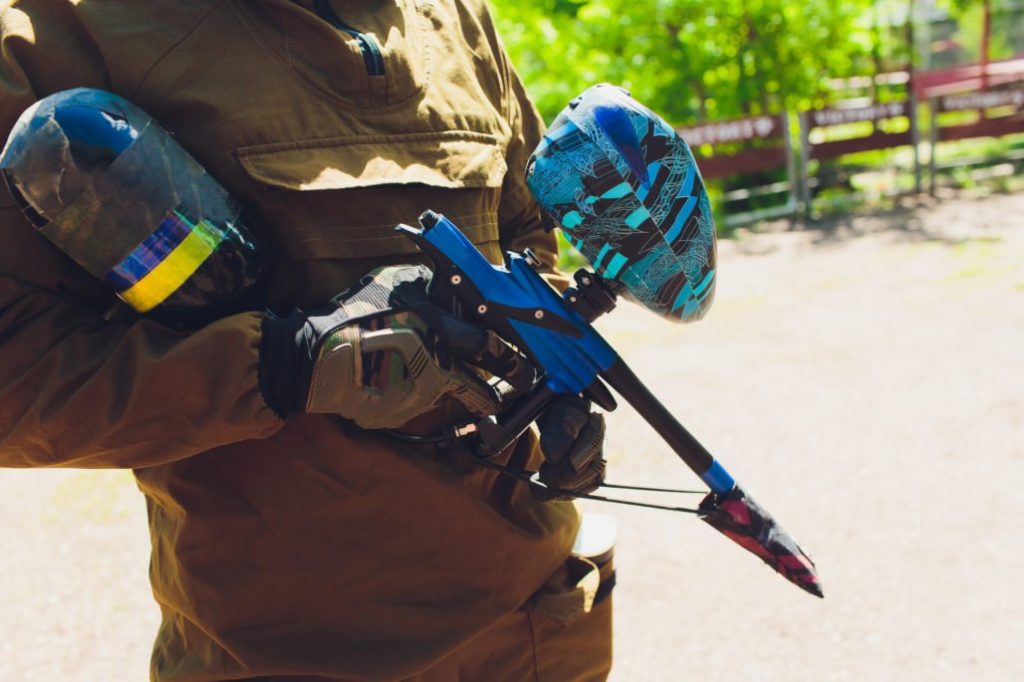 As a rookie, do you really want to spend a few hundred dollars on a paintball gun that you might not use? What if you realize that paintball markers are too complicated? Investing too early in paintball without understanding how a marker works is just a waste of money. To be frank with you, it’s best to start with an entry-level marker so you don’t feel guilty about spending so much money on a hobby you ended up not liking.

The Azodin Kaos gun is one of the cheapest markers you’ll ever find in the market. It’s perfect for people who just want to have a paintball gun of their own without breaking the bank. Several beginners have started with the Azodin Kaos and they found it very easy to use and maintain. If this got you interested, keep reading to know more about this marker.

Have you ever heard of Azodin markers? If you haven’t, you’re hardly to blame. For those who aren’t familiar with most paintball marker brands, it’s unlikely you’ll hear about Azodin a lot. This is mainly because this manufacturer is relatively new to the market. To add to that, the markers that the company designs are mostly entry-level models.

A quick background about the Azodin – they are made up of former Kingman employees. Kingman is a known manufacturer of high-performing markers but the company was sold to another company. They retained their name for some markers, however. Going back to Azodin, the employees that used to work for Kingman had over 50 years of experience. That makes them more than qualified to create their own paintball guns.

If there is one thing to know about Azodin as a paintball gun manufacturer, it’s that they produce affordable entry-level markers. That’s their specialty. Most of their markers retail for less than a few hundred dollars. They’re even the first choice for price-sensitive players.

A Quick View of the Azodin Kaos 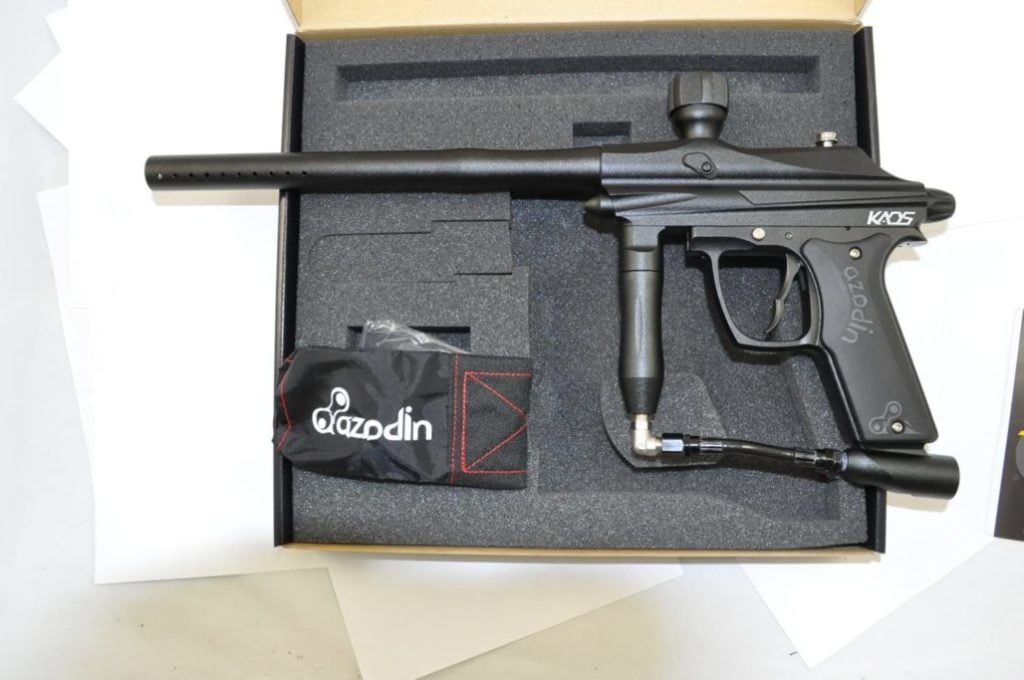 So what’s so great about the Azodin Kaos? The Azodin Kaos is just like any entry-level marker in the sense that it doesn’t have those sophisticated features. At first, it feels discouraging to buy, but you’ll be glad that the Azodin Kaos kept it simple. In short, this paintball gun is a no-frills type of marker.

True to the Azodin brand, the Kaos model is very affordable. It’s so affordable that you wouldn’t believe a paintball marker can cause that less. However, despite its price, the Azodin Kaos still maintains a good level of quality and consistency. For one thing, its barrel and mechanism ensure that there is no air wasted from the tank.

When it comes to performance, the Azodin Kaos delivers even when you’re just a beginner. You can be a force in the field with this marker. All you have to know is how to shoot and aim properly. That’s the beauty of having a low-maintenance and easy-to-use paintball gun.

Features of the Azodin Kaos 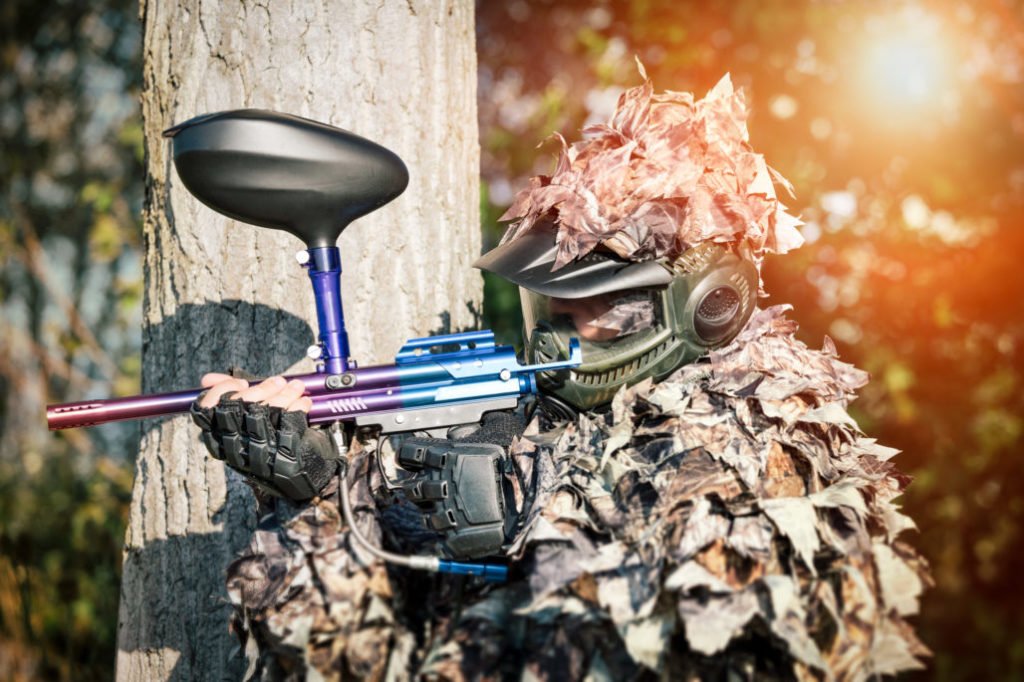 Does the Azodin Kaos have have something to offer? You’ll be amazed that it does, given that it’s pretty economical. Here’s a quick overview of each of its features.

The Azodin Kaos is a semi-automatic .68 caliber. This is a standard type of paintball gun that is aligned with the Kaos’ purpose of being an entry-level marker. As a semi-automatic marker, though, it’s not fully automated. At most, the loading of the ball from the hopper is automatic. Other than that, everything else is manual.

This is a good thing because most beginners need to practice how to use a trigger properly in order to play paintball well. Consider it as a rite of passage. If you already know this, then the Azodin Kaos can be converted into an electric marker.

Another feature you’ll love about the Azodin Kaos is its compatibility for both CO2 and compressed air. These two types of gases have their own pros and cons but it’s all a matter of preference. Some will prefer the compressed air more because it’s relatively consistent compared to CO2. It’s a good thing that this paintball gun gives you the choice of picking from these two gases.

Single-bolt systems are used to make maintenance and cleaning a lot easier and faster. The Kaos’ single Delrin bolt works just like a regular single-bolt system. This means that there’s one bolt that holds the top of the marker. The purpose of this is to have a faster way of cleaning your marker after every game. To assemble the gun after cleaning, you just have to put back the Delrin bolt.

Dual ball dents were designed by Azodin to make it easier to keep the balls in place before you fire them. They can help improve accuracy in terms of loading, so there’s not going to be any problems during this part of the shooting process. These dents are also complemented by a solid grip frame to make it easier to manage the whole gun.

Pros and Cons of the Azodin Kaos 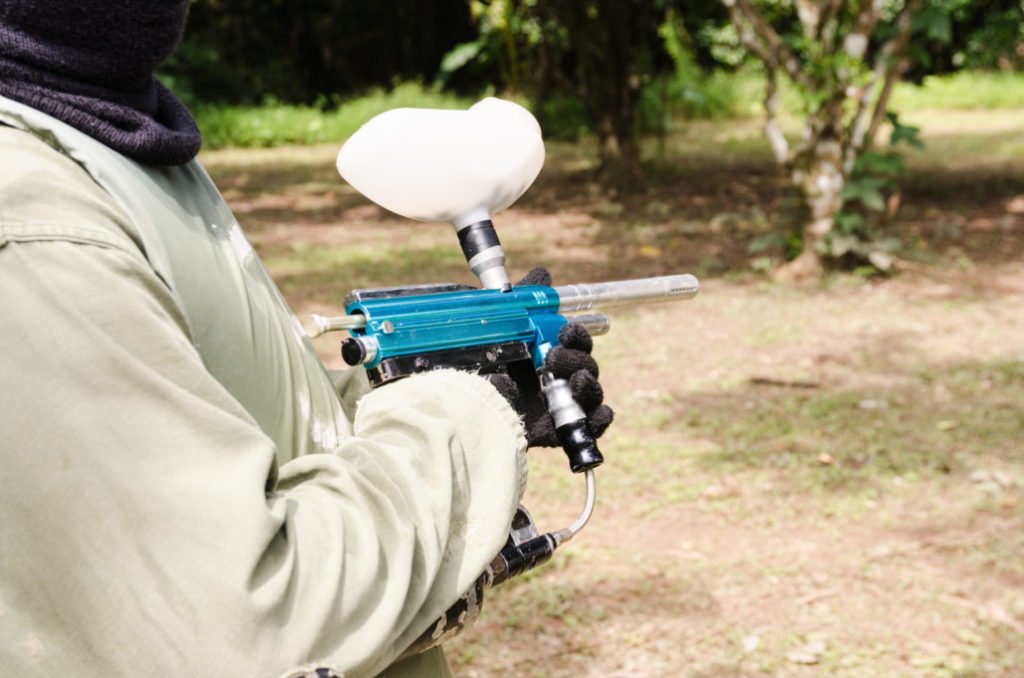 By now, you already know that the Azodin Kaos is a very affordable paintball gun. To give you an idea of how affordable it is, it only retails for less than $100. Even if you search it on Amazon or buy it from your local retailer, you’ll never find one of the Kaos’ units to be more than a hundred dollars.

Despite this price point, the Azodin Kaos isn’t made from cheap materials. It uses hard aluminum so it doesn’t break easily. Hence, this marker can last for a few years. Definitely a bang for your buck!

Did you know that you can upgrade the Azodin Kaos to an electric one? This semi-automatic .68 caliber marker can be easily upgraded to an electric marker just by adding a few parts. You don’t have to buy a new marker if you decide to have a change in the operating system. Again, this is a much cheaper alternative than buying a new marker especially when you still have a gun here that’s working in perfect condition.

Just because you’re a beginner doesn’t mean that you won’t be able to repair a few things on your paintball gun. Fortunately, the Azodin has included a small tool kit for all your marker’s minor repairs. There’s no need to go to your local store to get your marker fixed.

It was mentioned a while ago that the Azodin Kaos is made of hard aluminum. This material is pretty common among long-lasting paintball markers. Unfortunately, not all markers use hard aluminum (some use metal), so it’s great that the Kaos uses this material. Plus, hard aluminum is strong enough to withstand hard weather. While it’s unlikely that you’ll be allowed to play paintball during inclement weather, it’s nice to know that your marker won’t break the moment it gets cold or wet everywhere.

When you’re playing paintball, you want a gun that can shoot so fast that your opponent ends up distracted. The good thing about the Azodin Kaos is that for an entry-level marker, it shoots fast. Beginners won’t have a hard time shooting an opponent because paintballs will just keep coming out from the barrel.

Last but not least, the Azodin Kaos is very lightweight. It weighs a little over two pounds so even kids can carry it easily. This can be attributed to the hard aluminum which is also known to be a lightweight yet durable material. If you’re looking for a marker that doesn’t give you a sore arm after hours of play, the Azodin Kaos is a great candidate.

So far, the most obvious downside to the Azodin Kaos is its sound – it’s loud. That’s not even an understatement since its noise can be heard from across the lawn. Even if you’re not planning to be hiding during your game, it always helps to have a less noisy marker. You wouldn’t want to give away your location when you fire, right?

Another disadvantage of the Azodin Kaos is the fact that it keeps chopping paintballs. What is chopping? It’s when the marker literally “chops” the paintball in half. Well, it doesn’t chop anything but for some reason, the paintball breaks into pieces inside the barrel.

Some people don’t mind that this happens from time to time but the Azodin Kaos has a knack for breaking a lot of paintballs. This can be very annoying after a while because not only does it pose as a disturbance to your game; it also becomes an inconvenience. Just imagine how many times you have to clean your gun because a paintball broke.

Accuracy is a factor of so many things but as far as the Azodin Kaos is concerned, it’s not the most accurate due to its barrel. The barrel is just 12 inches long so it’s not really meant to be used by snipers. While you can always change the barrel, you have to shell out money for a new part since Azodin doesn’t have another stock barrel in the Kaos’ package.

After all the praise about the Azodin Kaos, it still doesn’t match the most efficient beginner-friendly markers found in the market. The more you get better at paintball, the more you’ll notice that it’s not as efficient in using air. Eventually, you might opt for a more efficient paintball especially when you plan on joining tournaments. Unfortunately, you might reach the point that you’ll outgrow the Azodin Kaos.

How Does the Azodin Kaos Compare with Other Paintball Markers? 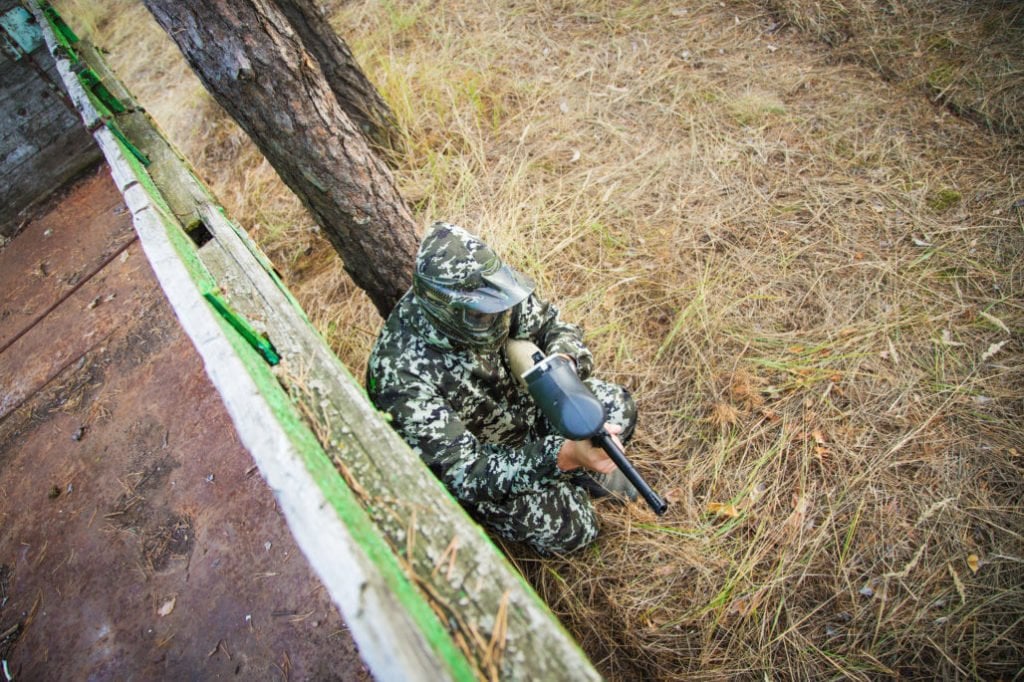 The Azodin Kaos is hardly an intermediate-ready paintball gun. Hence, it shouldn’t be used for tournaments and more competitive types of paintball games. However, if you’re a beginner testing out the whole paintball craze, then you won’t find a better entry-level marker that’s high-quality for its price point.

The Azodin Kaos is very impressive. It is able to keep up with fast shooting and it’s also reliable even under harsh weather. You wouldn’t have to worry about it breaking when it gets hit or when it rains. Customers are also impressed by how it’s so easy to use. You don’t need a lot of knowledge in paintball to be able to use this marker.

Keep in mind that the Kaos is not meant to be anything else but an entry-level marker. This is considered a downside of the gun because it’s not as customizable as one would expect it to be. Sure, you can turn it into an electric marker but other than that, you won’t be able to put a lot of accessories on it.

In terms of efficiency and accuracy, there’s still a long way to go for the Azodin Kaos. It needs to improve on how not to break a paintball in half. Plus, it has to ensure that its use of compressed air or CO2 can be comparable to the high-performing models at the same level. 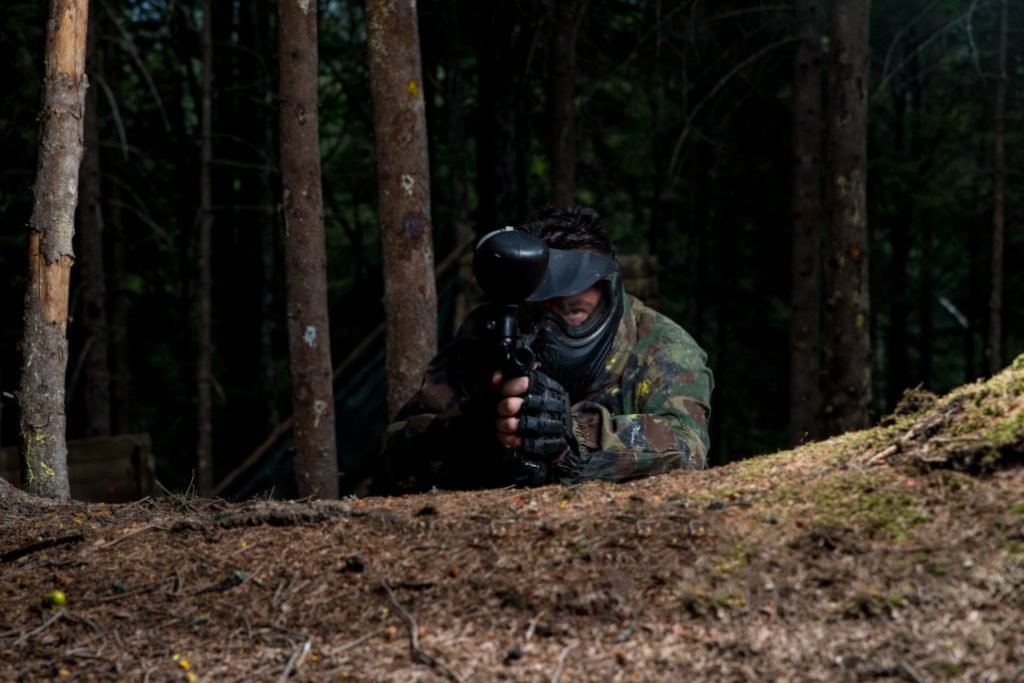 The Azodin Kaos is no Tippmann nor Planet Eclipse marker so it seems unfair to compare them to their models. The Kaos is a unique paintball gun in its own right because no other marker can be both reliable and durable for the affordable price of less than $100.

For beginners, this is the perfect entry gun. It’s simple, compact, light, and easy to use. It’s so easy to use that you don’t need any prior experience to be able to get how it works. You can just take it out from the box, assemble it, and you’re ready to go. It’s also low-maintenance, so what else can you ask for in a starter gun?