The DYE Proto Rize is an all-around marker that is meant for high performance. The best part here is that you get all the professional features without paying a heavy price. When it comes to paintball guns, isn’t that all that matters? Of all the paintball guns you’ll see, you won’t find a marker that has a bunch of professional features that come with a reasonable price.

The DYE Proto Rize is one of the more famous DYE guns best for beginners and intermediate players. It’s easy to use and easy to maintain. On top of that, it has a compact design given with a splash of color. If you’re looking for a marker that has it all, then you’ll love the DYE Proto Rize. Get to know more about it below. 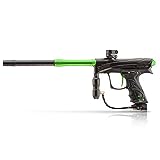 DYE Precision started back in 1994 with Dave and Rhonda DeHaan building the company. DYE stands for David “Youngblood” Enterprises. The goal of the company was to create tournament-worthy guns that will be sold at a reasonable price point. Until today, DYE makes sure that this is done with most, if not all, of its markers being sold at less than $500.

When it comes to precision, DYE develops its technology that would ensure that its markers deliver accurate and consistent shots. This is almost guaranteed even when you’re just a beginner using their markers for the first time. Of course, precision is still affected by the player’s skill, but as far as DYE is concerned, their markers can help you improve your overall performance.

DYE paintball guns are available through their online store or other authorized retailers. Some offer discounts and packages that come with other accessories from DYE Precision itself.

A Quick View of the DYE Proto Rize

At a glance, the DYE Proto Rize is a simple-looking colorful marker. It’s compact and minimalist and it looks exactly like other markers. It doesn’t have a lot of accessories that come with it since the gun itself has all the features you need to play well.

The DYE Proto Rize is often called an all-around gun, but what does that even mean? An all-around gun means that you can use it for regular games and tournaments. Most of the time, guns like these are not just efficient, but also accurate and has a low chop rate. This is exactly what the DYE Proto Rize has. Instead of just being efficient, it also makes sure that it prevents chopping regardless of the type of paintballs you choose.

The DYE Proto Rize is also known to be reasonably-priced. If you compare it to markers that have the same professional features, the former will come out as the most affordable option. While there are players who don’t mind investing in such expensive paintball guns, there are some players who are also concerned with the price of their markers. After all, the gun isn’t the only thing you’ll be paying for when you play paintball.

Features of the DYE Proto Rize

DYE Precision claims that their Proto Rize has professional features. What are they and how do they help give a great performance?

The Proto Rize’s patented Fusion Bolt is its most impressive feature. This bolt gives a smooth and consistent push on every paintball reducing the chances of missed shots and varying velocities. This technology works by reducing the use of air for every shot. With less air used, the kickback and recoil are also barely noticeable.

Partnered with the spool valve system, the Fusion Bolt gives an easy mechanism to the whole marker. With just one press of a button, you can already access the bolt. And if you aren’t aware of it yet, having low pressure with the paintballs also reduces the times that you have to check on the spool valve itself.

Hate it when paintballs break right before you shoot them? You’re not alone. DYE Precision hates it too which is why it made sure that their anti-chop break-beam eye system reduces the number of chopped paintballs. This is a good complement to the Fusion Bolt that uses a lower PSI than most guns. Even when you use low-quality paintballs, the chances that a paintball will be split in half are low.

Not all electronic markers are equipped for tournaments. Fortunately, DYE Precision equipped the Proto Rize with four different firing modes that will help every player choose their best strategy during tournaments. Of course, these firing modes are also available when you’re not in a tournament.

These firing modes are easily changed with a switch on the LED circuit board. It also comes with an adjustable rate of fire that can better complement your chosen firing mode. This means that the Proto Rize gives you enough flexibility to experiment with the gun.

The trigger of the Proto Rize is made of aluminum, just like the rest of the paintball gun. This material allows you to comfortably fire a lot of paintballs. The trigger is smooth and customizable, so if you find that the aluminum is too smooth for your liking, then you can also change it with a different one.

Having an adjustable trigger is more advantageous than you think. Not only is the trigger responsible for the actual shot, but it also affects your accuracy when you aim. With an easy-to-press trigger, you can shoot straight away without any effort on your hands.

The Proto Rize comes with a True Bore 1-piece barrel. Unlike most markers that come with 2-piece barrels, this paintball gun only has one full piece 12-inch barrel. This makes it a lot easier to install and detach whenever you want to clean your gun.

Another thing, unlike other stock barrels, this barrel is very accurate. Even if it’s not a 2-piece barrel that provides a longer range, you’ll find this barrel to be accurate enough that you don’t need to replace it.

Pros and Cons of the DYE Proto Rize

What are the pros and cons when you buy a Proto Rize? Here is a list that will help you manage your expectations of this paintball gun.

As an electronic marker, it’s expected to be tournament-ready; however, not all markers are made for tournaments as you’ll realize later on. With the DYE Proto Rize, you’ll be able to play whatever kind of paintball game there is. DYE Precision was not joking when they said that this is an all-around marker that can be used professionally.

Aside from being an entry-level marker, the Proto Rize is great for newbies because it’s just so easy to use. You don’t need to prepare it every time you have a game which makes it very convenient. You can even just attach the barrel and the other parts right before your very first game. It’s that low-maintenance.

As a newbie, you might not be too confident with your shooting skills. Some get intimidated with their guns because they end up not shooting their opponent right where they want to. With the DYE Proto Rize, these problems will be lessened.

The Proto Rize is one of the few paintball guns that have its technology for reducing paintball breakage. Its anti-chop technology is very helpful in making sure that paintballs don’t break easily. Even if you use a paintball that is easily broken, this marker rarely breaks the ball. Because of its impressive anti-chop rate, players are constantly awed by how reliable the Proto Rize is.

It was said a while ago that the Proto Rize looks a lot like other paintball guns. While this is true, DYE Precision has added a touch of color to the gun making it a little more appealing to the eyes. Sure, color is just a distraction and can be a giveaway to opponents but it doesn’t hurt to have a little color to brighten up a normal-looking paintball gun.

Have you seen the grip of the Proto Rize? If you haven’t yet, look at it again and notice the design and the angle of the grip. If you’ll notice, it has subtle ridges and a slightly slanted grip. This is intentional because DYE makes sure that their markers are easy to hold. You’ll notice the difference when you hold this gun and you hold another not-so-ergonomic marker.

Despite all the excitement about the efficiency of the Proto Rize, there are two parts of the gun that DYE forgot to revamp – the clamping feedneck and the barrel. While these two are not the most talked-of parts, they have critical roles in ensuring that your overall user experience with the gun is positive.

Unfortunately, these two parts are made of low-quality material so you have to replace them with a more durable model. Yes, the one-piece barrel is meant to make installation easy but that’s just about it. It’s not durable at all and some users have already commented on having to replace it after a few games.

Although not exactly a disadvantage, the small price difference between the basic Rize and the Maxxed makes people think twice about buying the former. If the price gap isn’t so different, why not buy the Maxxed instead? This is one of the reasons why sales of the Proto Rize have declined, but that isn’t a testament to the marker’s performance.

How Does the DYE Proto Rize Compare with Other Paintball Markers?

If there’s a marker that’s a lot like the Proto Rize, it would be the Maxxed. The Maxxed is an amped-up version of the Proto Rize with top-level performance best for intermediate and professional players. With that said, which one is better?

For newbies, the Proto Rize is still the better choice because of several reasons. One, it’s lighter. This gun weighs less than 2 pounds while the Maxxed is more than 4 pounds. As a beginner, the weight can affect your performance since you won’t be used to heavy weights while you run, hide, or roll. Another reason is that the basic Rize is cheaper. Price-sensitive players will appreciate not having such a huge investment right at the start of their interest in paintball.

On the other hand, the Rize Maxxed is more equipped for intermediate players. Its features are made for people who understand how a marker works, thus giving them more flexibility to tweak the mechanism of the Maxxed. It has the same aluminum body as the basic Rize and it also has the same efficiency.

It all comes down to your budget and preference. Even if the Maxxed is for intermediate players, there’s no stopping you from buying it especially if you’re more interested in its features. Likewise, even intermediate players will find the Proto Rize to be a good choice if they want to save on budget.

Is the Proto Rize the all-around gun people are expecting? Yes, it is! It has all the features you would want for your regular games and tournaments. It’s reliable and durable so there’s no need to worry about how good it will perform once you’re out in the field.

Overall, the Proto Rize is a really good entry-level marker. For its price, it is already very impressive. A lot of people who have bought their own Proto Rize are still happy that they are still able to use it even when they became intermediate players. In other words, this gun is meant to be your companion for a long time.