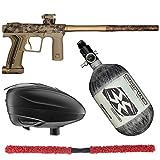 Planet Eclipse started in 1991 but their beginnings didn’t involve a flagship marker. Instead, they were manufacturers of marker parts for companies such as Autocockers, Mags, and Angels. They were the team behind Autocockers’ Eblade which propelled the company to greater heights back in 2002.

Planet Eclipse is known to be a maker of high-quality and high-performing markers. It’s also known for the use of its own Gamma Core technology which ensures that its markers can withstand harsh weather conditions while maintaining efficient use of air for all its shots.

A Quick View of the Planet Eclipse Etha 2

The Planet Eclipse Etha 2 is famous for being the new and improved version of the Etha 1. It is lighter, better, more efficient, and more ergonomic. Previous users of the Etha will surely love this upgraded model. But other than old fans of Planet Eclipse, the Etha 2 is also making a name for itself by being a beginner-friendly marker.

How is it beginner-friendly? You can start with the assembly and disassembly. If you ever want to disassemble the Planet Eclipse Etha 2, you won’t have to do it with so many tools. It only has one screw that locks the foundation of the marker, so you can just remove it gain access to the internal components of the marker.

Other than its ease of use, the Planet Eclipse Etha 2 is also reliable. It uses nylon as its main material making it durable even when you play in harsh weather conditions. Even when it gets hit by someone, it won’t break right away. If you’re looking for a marker that is both beginner-friendly and durable, the Planet Eclipse Etha 2 is one of the best choices out there.

Features of the Planet Eclipse Etha 2

What makes the Planet Eclipse Etha 2 a marker that stands out from its competitors? Here are its best features.

Planet Eclipse’s Gamma Core technology is its most sought-after feature. It’s also the most popular feature. Why? The Gamma Core technology found in most of Planet Eclipse’s markers ensures that there is an efficient use of air. This means that you can continuously fire 1,000 paintballs from a 4,000 PSI tank. You won’t find that in a lot of markers, even those that intermediate players use.

The Gamma Core technology uses a Breech Sensing Technology that helps regulate air usage. If you’ve ever heard of Planet Eclipse’s Gtek, then these two share the same technology for the spool valve.

The use of the Gamma Core doesn’t stop there. This spool valve technology also makes the Planet Eclipse Etha 2 durable even when it’s used in harsh climates. This way, your marker doesn’t break even when it’s cold or windy outside. The air coming from the marker even remains consistent so that you don’t waste a lot of paintballs.

One of the main differences between the Etha 1 and Etha 2 is the grip space. The latter has a larger grip area making it more comfortable to use. You don’t even need to have big hands to appreciate this. When you compare the grip of Etha 1 and Etha 2, you’ll notice that the former will somehow hinder you to move freely as you fit when pressing the trigger. This can be uncomfortable and annoying especially when this affects your accuracy as a shooter.

Part of the Etha 2’s grip area is the safety micro-switch. It’s found near the trigger. This feature helps prevent unnecessary presses on the trigger. It also helps you conserve some ammo especially if you’re the type of person who just keeps pressing the trigger.

Don’t you want a marker that is easy to maintain and assemble? The Planet Eclipse Etha 2 has this feature. It uses a single-screw bolting system that makes your life easier regardless of what type of player you are.

The single-screw bolting system literally means that – it uses a single screw to lock the whole system in place. This may sound risky since it all comes down to one screw but somehow, Planet Eclipse has made a robust screw that keeps everything in place. If you ever want to tweak some internal components of the Etha 2, you just need to remove one screw.

Another important feature of the Planet Eclipse Etha 2 is the spring-return bolt system. This bolting system improves the acceleration of the paintball even when the speeds are inferior. Hence, the paintball can still maintain its velocity even when it’s losing pressure from behind it.

The spring-return bolt system is a good complement to the foregrip and GRN frame. They all work together in order to give a comfortable experience using the marker for prolonged periods and they make sure that there is less air that gets wasted on the whole system.

Ergonomics is rarely discussed when it comes to the grip and trigger frames. Fortunately, Planet Eclipse has made a few design adjustments on the Planet Eclipse Etha 2 to make the marker more comfortable to use even when players play for more than an hour.

The Etha 2 has an extendable grip that will give you more space if it makes you comfortable. It also comes with dual-density rubber grips that serve two purposes – to help you have a sturdier grip on the marker and to give added protection to the circuit board. If you didn’t know, the circuit board is found in the front grip.

Pros and Cons of the Planet Eclipse Etha 2

Whether you’re a beginner or an intermediate player, you’ll appreciate the fact that the Planet Eclipse Etha 2 is just 2.2 lbs! The lightness of the marker will allow you to add a few more accessories before you become uncomfortable with its weight.

Thanks to the single-screw bolting system, you won’t be annoyed about disassembling your marker. Cleaning is also easy to do; it only takes a minute to disassemble the marker and clean or adjust the internal components. As for the usage, there’s barely anything to assemble which beginners will appreciate especially when they aren’t familiar with how all the parts of a marker work.

The trigger frame has a rubber grip with a few groves on it. This design, while pretty common in markers, makes sure that your hands don’t slip from their position. The groves will help keep your fingers in place even when you press the trigger.

Moreover, the trigger area is very spacious. This is one of the most underrated improvements from Etha 1. It’s just a minor improvement but if you’ve used the Etha 1, you’ll know how comfortable the extra space is on the Etha 2. Now, even those with larger fingers can have enough wiggle room.

At the end of the day, you want a marker that shoots like it’s a high-end model. For an affordable price, the Planet Eclipse Etha 2 proves that you don’t need to spend three times more just to find a marker that shoots well and consistently. Of course, this would not be possible if not for Planet Eclipse’s Gamma Core technology. If you think about it, the Gamma Core technology has definitely beefed up the whole marker making it a reliable piece of equipment for your games.

As if praise for the Gamma Core technology isn’t enough, the Planet Eclipse Etha 2 also shows that it doesn’t need any tuning even if the weather conditions change. This is another advantage of the Gamma Core since beginners do not have to worry about tuning their marker. You can simply continue playing and the marker will work just as well as it does even when the weather suddenly changes.

Lastly, the Planet Eclipse Etha 2 is a very affordable beginner marker. It’s less than $400 so it’s a good starting marker for those who aren’t sure if they will be playing paintball in the long run. What makes this deal even sweeter is that at just this price point, you get a marker that can compete with other mid-range models in the market.

The downside to owning a Planet Eclipse Etha 2 is that there are limited parts that you can customize. It’s either you keep yourself contented with its current parts or you pay a lot for parts that are compatible with the marker. For those with tight budgets, upgrading seems to be pricier, making buying another affordable marker seem a better option.

In spite of the efforts of Planet Eclipse to reduce the sound of the marker, it still makes a relatively loud sound for every shot that you make. This is a great disadvantage especially if you want to stay undetected by your opponent. However, there are ways to reduce the sound to a more silent one but this involves buying additional accessories which is just another expense.

The Planet Eclipse Etha 2 isn’t an old model, but it somehow feels that it was made many decades ago. For those looking for a minimalist marker, this model may disappoint you since it doesn’t look sleek and high-tech. Yes, paintball markers are more than just looks but why choose a model that looks like it is not sophisticated to be brought to a paintball game?

How Does the Planet Eclipse Etha 2 Compare with Other Paintball Markers?

Compared to other beginner markers, the Planet Eclipse Etha 2 exceeds expectations thanks to its Gamma Core technology and durable material. It may be a marker that’s best for beginners or occasional players, but it doesn’t hold back in terms of consistency and efficiency.

When you put the Etha 2 alongside other more expensive markers of its same rank, you’ll end up wanting to buy this paintball gun even more because it shows that quality makers don’t need to be expensive. Planet Eclipse’s marker has definitely surpassed what most beginners would expect from an affordable paint gun.

Overall, the Planet Eclipse Etha 2 is a great buy. It may not be perfect for intermediate players and it is a long way from being a professional-grade marker (it’s not trying to be anyway), but it does the job. It stands the test of time and it doesn’t need a lot of accessories to significantly improve its performance.

So is the Planet Eclipse Etha 2 worth it? Definitely. For its affordable price, its quality doesn’t feel like it was just made for those who have small budgets for paintball. Those who have bought the Etha 2 continue to use them until years of use. This marker remains durable and reliable regardless of the kind of weather you are playing in.