MagFed markers are starting to become popular these days with more people appreciating the beauty in using fewer paintballs when playing a game. Of course, MagFed games are more than that but it doesn’t deny the fact that you’ll learn to use paintballs more sparingly.

Tippmann is one of the leading paintball gun brands in the world. And as a leading brand, they’re definitely already prepared for the rise of MagFed games. Hence, they made the Tippmann TMC. The TMC is a lot like their Cronus model except that the former is for MagFed games. If you’re interested to get a MagFed marker of your own, then this is a great choice. 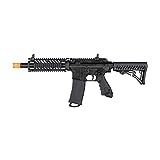 Whether you’re a newbie or an intermediate player, you will hear of the Tippmann name when it comes to guns. Tippmann is so famous in the industry that it’s impossible not to hear of one of its models as being the best in its class. The company has been around since the ‘80s too, so that gives you an idea of how long they’ve been making and innovating paintball guns.

What’s the hype with Tippmann markers anyway? It’s simple – they make high-performing paintball guns at very affordable prices. A lot of their guns are sold for lower than $300. What’s great about this is that whether you’re price-sensitive or not, you’ll be curious as to how good it is for this price range.

Fortunately, Tippmann markers rarely disappoint. Ask around if they didn’t like a Tippmann gun and you’ll seldom be answered with an affirmative. In other words, anyone who has ever held or owned a Tippmann marker was impressed by how durable and reliable their markers turn out to be.

A Quick View of the Tippmann TMC

The TMC is the MagFed version of the Cronus. What does that mean? To give you an idea, the Cronus is one of the most sought-after guns for speedball. It’s small and compact and it is very accurate. It’s lauded for its ease of use which makes it an ideal entry-level marker.

The TMC is the same, only it’s for MagFed games. This means that instead of a hopper, you’ll have magazines to store your paintballs. However, what’s unique about the TMC is that it still comes with a hopper in case you want to use it. At first glance, the marker looks like a military gun. Beginners might get intimidated by this but you shouldn’t worry because Tippmann has a comprehensive manual that will explain everything you need to know.

Even though the TMC is great for newbies in the MagFed games, they’re also perfect for intermediate players who love customizing guns. The gun itself has its rails which makes it easily modifiable. A lot of people have had fun modding their TMCs because of their ease of customization.

Features of the Tippmann TMC

The TMC looks like it’s full of amazing features. Here are all the things you will enjoy when you get yourself this paintball gun.

The most talked-about feature of the Tippmann TMC is its MagFed and Hopper Fed capabilities. Unlike your regular MagFed gun, the TMC gives you the choice to use a hopper or a magazine as storage for your paintballs. Unfortunately, you can’t use both of them at the same time. But other than that, you can easily switch to the use of your magazine if you want shaped projectiles.

The TMC looks bulky and heavy, there’s no doubt about that. It’s not a mistake here in the TMC because Tippmann meant it to be robust. A closer look at the gun will show you that not only is it packed with hard materials, but it’s also ergonomically designed.

The rubber trigger frame makes for a great grip. It’s very comfortable to hold and your hands will find themselves wrapped around the grip as if it’s the most natural thing in the world. The grooves found on the grip are also properly spaced to mimic your fingers. So in spite of the design, you can be sure that you won’t have a hard time holding the TMC.

The TMC is a pneumatic gun which means that it doesn’t have any electrical parts. At most, it has a semi-automatic firing mode. For a MagFed gun, this helps in making the marker last longer in games. If you compare this to other electric markers, the TMC will have a more durable design and mechanism that will last for years.

Looking for ways to customize your gun? The TMC has enough Picatinny rails that will make customization and modification easy for you. There’s a lot of accessories you can put on the gun. Tippmann itself has a wide array of accessories that are affordable and durable.

This is a feature that Tippmann is famous for – its inline-bolt system. What does that mean? This system is responsible for making the whole shooting system of the TMC (and a lot of Tippmann markers) very consistent. It pushes the system to use air conservatively so you don’t use up a lot after a few games.

Moreover, the inline-bolt system reduces the chances of getting a paintball chopped. You have less time to worry about having paintballs break inside the system. A huge plus for the TMC.

Most stock barrels that come with paintball guns have bad reputations which is why it’s a surprise that the TMC’s barrel is a performer. The barrel is 12 inches which is long enough to aid you in taking more precise and accurate shots. The TMC’s barrel increases the overall accuracy to 50%.

In general, the barrel allows for paintballs to reach at most 150 feet from the shooter. This is already a good distance especially if you plan on shooting from afar. While other markers also reach this distance, they are not half as accurate as the Tippmann TMC.

Pros and Cons of the Tippmann TMC

Aside from the features, it’s important to know the advantages and disadvantages of owning a Tippmann TMC. There is no perfect marker; that’s a fact, but that doesn’t mean that you won’t find other things to love about each one. In this case, here are a few things you need to know before buying a TMC.

Did you know that the TMC is less than $300? For a robust MagFed gun, it’s very affordable, not to mention that it also performs very well. This is one of the best advantages of the TMC over other markers in its price range. Not only are you getting a Tippmann gun, but you’re also getting the quality and durability that the brand is known for. It’s a steal.

On its own, the TMC has all the features that you need from it. But Tippmann didn’t stop there. It included rails in the design to make it easy for you to add accessories and make modifications. Over time, you can improve the marker to fit your preferences and style. You might not even need to buy a new gun!

If you’ve ever seen a TMC before, then you know that Tippmann took its design seriously. Aside from the fact that it looks like a military gun, it also looks very heavy and high-end. The TMC uses aluminum and nylon in a lot of its parts so you can be assured that it won’t break even if you fall down or the gun gets hit by someone else. Besides, it’s Tippmann. All their guns are durable!

This paintball gun is not like your usual MagFed marker wherein you expect to just have one magazine. The TMC comes with two 20-round spring magazines so you have a lot of storage for all your paintballs. Just a tip – the marker works well when you just load 19 paintballs.

The TMC does not need to be maintained all the time. Apart from the occasional oiling and cleaning, it doesn’t need a lot of adjustment for it to work well. This is perfect for people who aren’t fond of cleaning or maintaining their guns. You have to thank the durable design for the low-maintenance capability of the TMC.

Even if this marker already comes with two magazines and a dummy mag, it still comes with a hopper. Ideally, you only use one, but if you need to have extra storage for your paintballs, the hopper feed neck is always there on standby.

The Tippmann TMC is around 4 pounds. As a MagFed paintball gun, this isn’t too heavy. In fact, when you compare this marker with other MagFed guns, you’ll realize that it’s a lot lighter. However, you have to get used to the 4 pounds. It’s unfortunate that not all newbies are comfortable carrying a gun this heavy for their first few games.

This seems to be normal for any MagFed marker. That doesn’t mean that you’ll love it. As a newbie, if you’re not into carrying heavy and bulky guns, then MagFed games may not be for you. The TMC is very bulky and so you need to be comfortable carrying guns like this before you invest in one.

One of the reasons why people don’t like the Tippmann TMC is because it makes a lot of noise. The gun produces a loud sound every time it shoots because it’s capable of operating at 750 PSI. Naturally, there’s going to be a kickback, recoil, and a very audible report. However, the sound it makes isn’t often a deal-breaker with a lot of players. Nonetheless, you should know that this is not ideal if you want to play in stealth mode.

If you’re a beginner, your first look at the Tippmann TMC might get you intimidated. Those feelings are valid since the TMC is not at all easy to disassemble. It’s not like other paintball guns that you can disassemble with just one quick push of the button. For the TMC, you have to get used to disassembling markers quickly.

How Does the Tippmann TMC Compare with Other Paintball Markers?

When it comes to accuracy, the TMC is one of the best MagFed markers out there especially when you consider its price. It’s consistent and reliable, plus it comes with an additional magazine to ensure that you don’t run out of paintballs. As far as shooting is concerned, the TMC has got you covered.

As for the price, there’s no doubt that the TMC has competitive pricing. It’s even one of the best things about the gun. With this, it makes for a good choice if you want to try MagFed paintball or if you want to start getting into paintball yourself. If you compare this to other markers with the same high-end features, you’ll get more bang for your buck with the TMC.

As an entry-level paintball gun, however, it’s not the easiest to use. Assembling, using, and even detaching its parts are a little more complex than other Tippmann markers or entry-level markers for that matter. Tippmann makes up for this by giving a manual with all the information you need.

Overall, the Tippmann TMC is the best MagFed marker to buy for beginners, intermediate players, and price-sensitive buyers. It has everything you can ever want in a MagFed paintball gun. It’s also easily customizable thanks to the rails that are available on the side. Tippmann also sells accessories and extra magazines that you can add to your TMC.

You might just experience a hard time getting used to the TMC especially when it is your first time playing paintball. Don’t worry, everyone starts somewhere. It’s a good thing Tippmann has a very comprehensive manual. If you read it, you won’t get lost. But the best way to get the most out of this gun is to practice with it.