Using A Paintball Marker For Self-defense: Is It Possible? 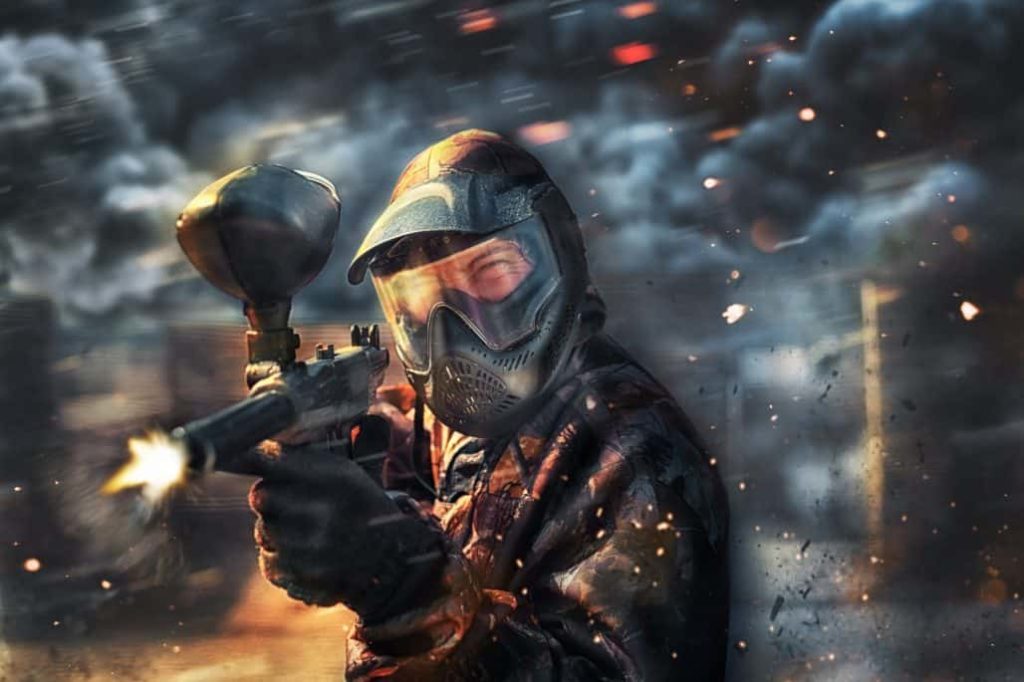 Is a paintball gun good for self-defence? Will it drive away a burglar in your home? If you’re wondering if having a paintball gun (also called marker) is a good self-defence tool than a real gun, then you’re in the right place. Know more about why paintball markers are effective and when they can actually help in self-defence below.

Power of a Paintball Marker 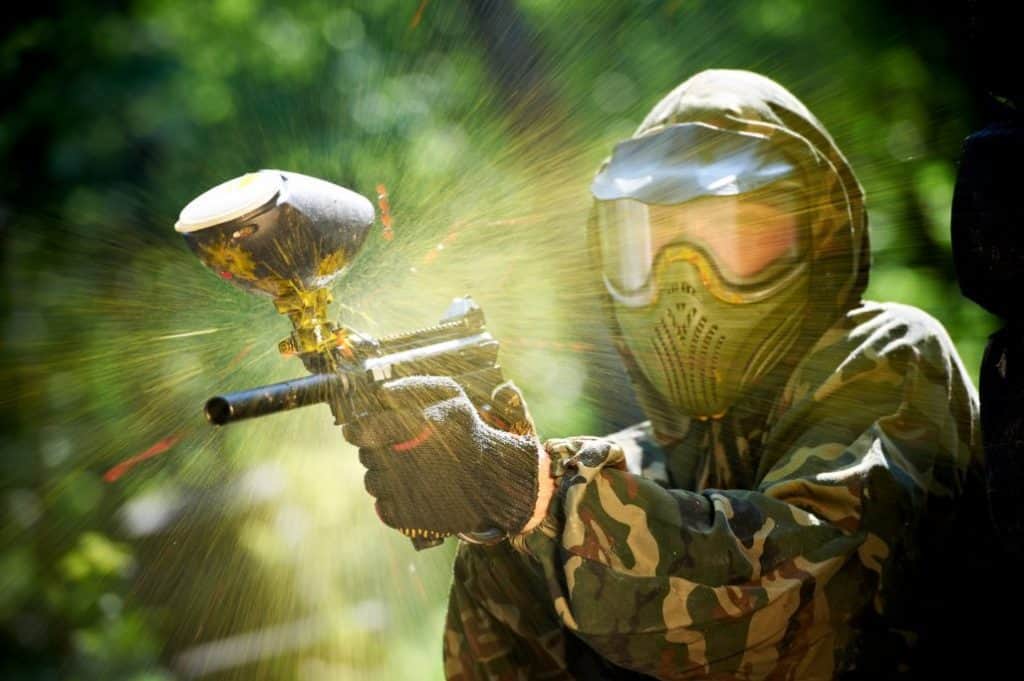 Why is a paintball marker an option for self-defense? A lot of people look down on paintball guns for self-defense simply because they’re often made in plastic, or at least, the ones you see in paintball arenas. People will think that a paintball gun is also just a toy designed to shoot paintballs and it’s just going to be embarrassing to attempt to defend yourself with a toy gun.

While all these notions on the paintball gun are valid, what most of these claims focus on is the material and purpose of paintball guns. Obviously, paintball guns aren’t commonly used in self-defense because that isn’t their main purpose. But did you know that they are used by the military for their training? If you didn’t know, then there must be a reason why they use a paintball gun and that’s definitely not for fun throwing paint around with their teammates. 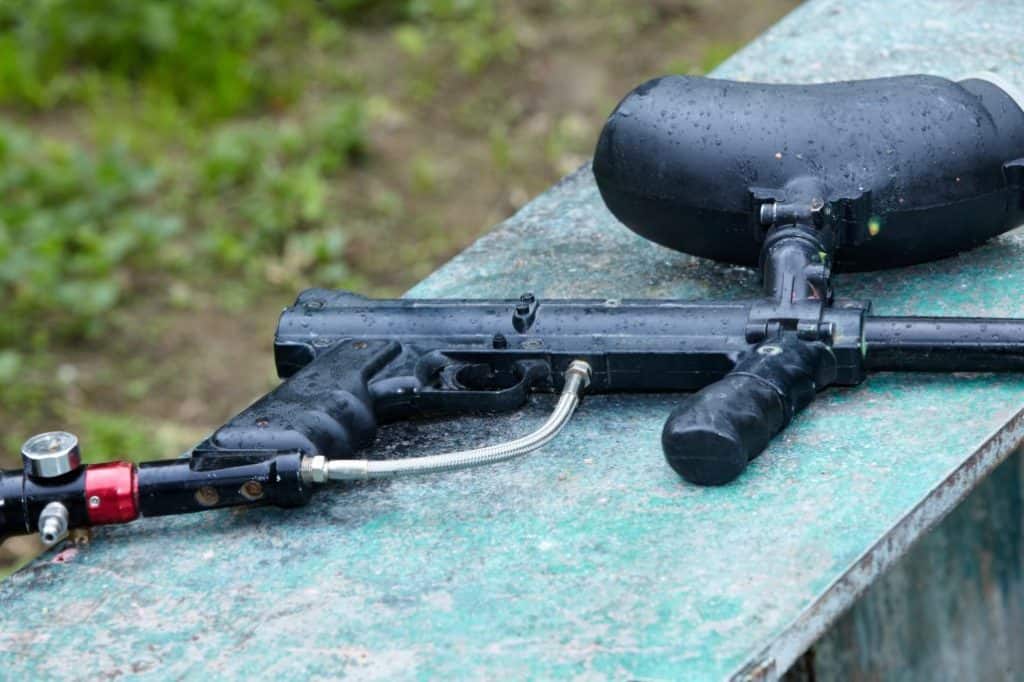 What’s the meaning of self-defense? Self-defense means protecting yourself when you are in danger or harm. That means when a burglar comes to your home, you are legally allowed to defend yourself whether you end up killing a person or not. Yes, it sounds morbid, but there are a lot of cases in the country when it came right down to killing the attacker just so the victim can protect himself.

Does that make a paintball gun useful in this case? Of course! A paintball gun, when aimed on the right area, can cause a bruise or sharp pain to your attacker. That moment of distraction or pain can allow you to call the cops or hit the attacker somewhere else so he or she can be brought to the floor.

If your paintball gun, however, is made of hard plastic, aluminum, or metal, then you can use it to hit the attacker when they’re near you and they’re down on the floor. That way, you make sure that he or she doesn’t have any more chances to hurt or kill you.

How to Use a Paintball Marker for Self-Defense 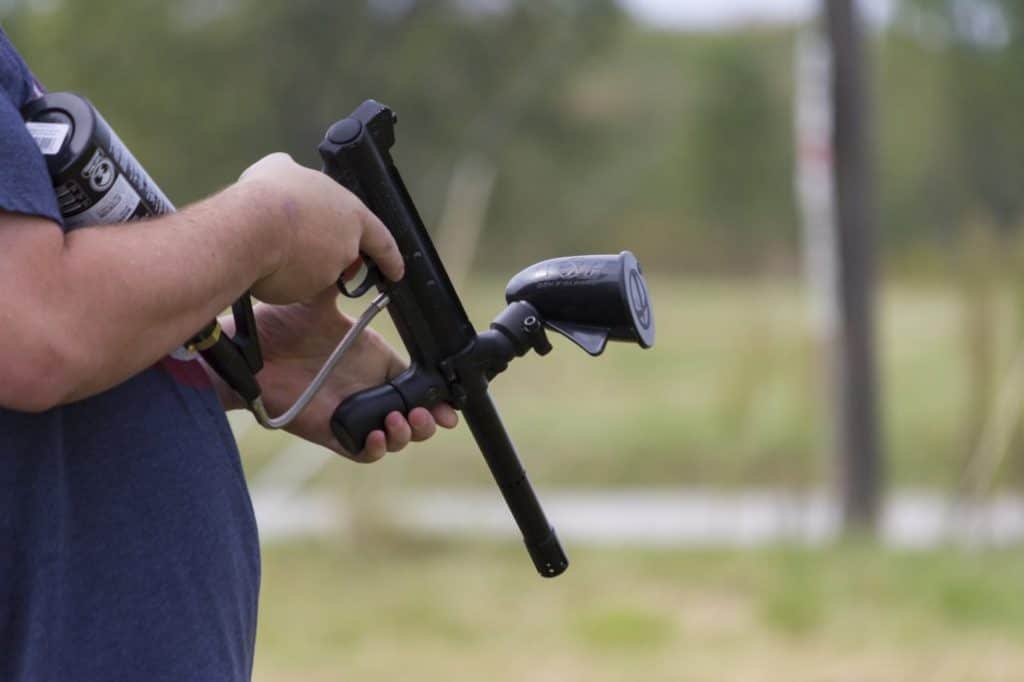 1. Aim at an unprotected area.

You know how a paintball hurts when you’re not wearing any protective gear. So when you aim at the thief in your home, make sure that you aim for unprotected body parts. It can be the arm, the forehead, the legs, or anywhere that is not covered by a lot of clothing.

If you’re not confident with your aim, you can aim in larger muscle areas like the arms, legs, or the stomach. The only problem with aiming in these areas is that if the thief has strong muscles, your shot will not hurt as much. So when it comes to that, make sure to assess the burglar too instead of just aiming anywhere that has exposed skin.

As much as possible, think about where you will shoot them. The reason behind this is that if you blow your cover and you anger the thief, then they will be more inclined to hurt you. Again, don’t just shoot them for the sake of shooting and hoping that they will be scared. This can easily backfire on you.

Aside from just aiming for unprotected areas, aim at sensitive areas of the body, too. That means the genitals, the eyes, the head, the neck. When these areas get hit, the thief will most likely be distracted for a few seconds which is enough for you to take him down (if that was your plan of action).

The only caveat to this is that it’s hard to aim at those parts because they are not exactly large. You have to focus your aim and make sure you’re in the right distance so that you can hit them with that high velocity coming straight from the marker.

Unfortunately, shooting them in these areas is very challenging and if you are unsure that you can do it, it might be best to aim for other larger body parts.

3. Use harder objects instead of a paintball.

One of the reasons why people make fun of paintball markers for self-defense is that they use paintballs for ammunition. Obviously, if that’s what you’ll be shooting, then it’s going to be a joke to your attacker. You definitely don’t want that. At a time of desperation, the last thing you should do is shoot actual paintballs.

So what can you use on a paintball marker? If you have DIY paintballs with firecrackers in them, then that’s what you use. Of course, they’re not allowed for recreational purposes, but if it’s self-defense you’re talking about, it will be okay. Hard rubber paintballs will also be useful. Make sure, though, that what you’re using are actually hard rubber balls so they have an impact when they get in contact.

As much as possible, don’t use paintballs that burst on impact. That way, you won’t have any self-defense done because it will not hurt in areas that are protected. Plus, your attacker might just take it as you mocking them and that will just anger them more.

A Paintball Marker is Not Enough 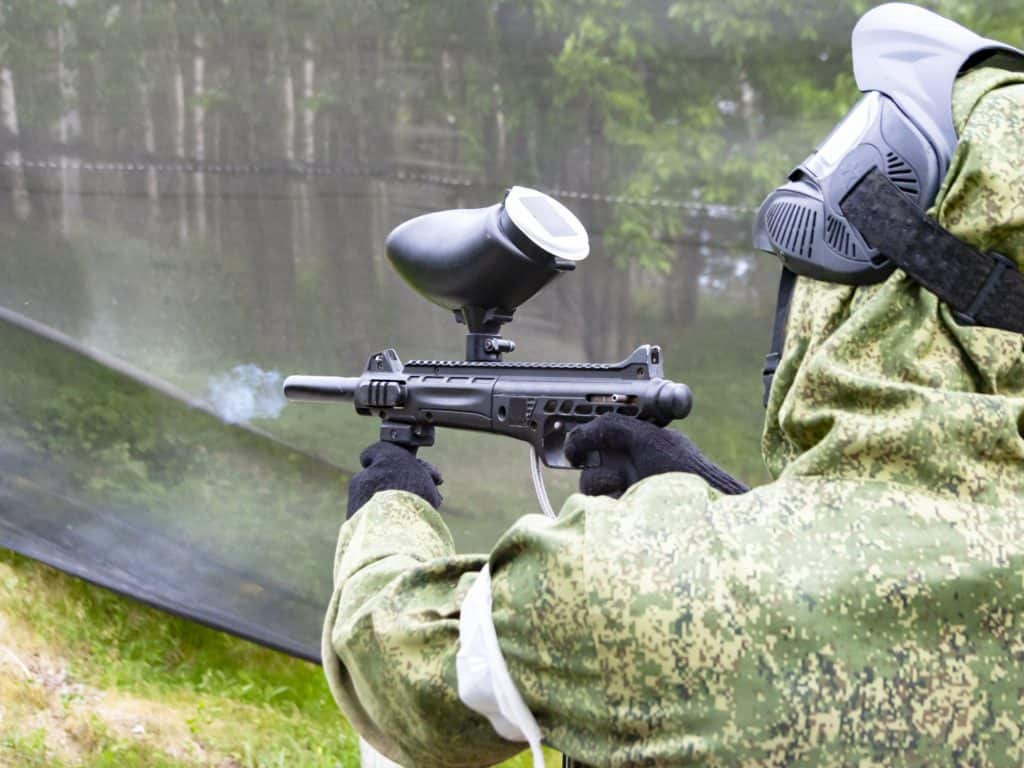 By now, you’re probably sold on the idea that a paintball marker is enough to defend you during a criminal attack. However, that’s not the case. If it’s a burglary, then you have a chance to defend yourself with a paintball gun if and only if you know where to aim and your marker has more than just paintball loaded into it.

By any means, a paintball marker is not enough. Remember, it’s not a gun and it’s definitely not built for defending yourself from crime. It is helpful but it won’t be the only thing that will keep you safe and alive. You’ll be needing more than that and it often includes quickness of mind, speed, strategy, etc. Of course, these things are easier said when you’re not in the face of danger, but the point here is that you should not be complacent even when you have a paintball gun on hand.

What are the disadvantages of a marker for self-defence then? In spite of it being very useful, a paintball gun is not perfect. One of the disadvantages of this (and even paintball players can attest to this), is the lack of accuracy. Even when you have a very expensive paintball gun, it’s not as accurate as a standard gun. Couple that with a very bad aim, then there is a great chance that you might not hit your attacker.

Another disadvantage of a paintball gun is that it’s not as strong as your normal gun. Unless you’ve invested on the aluminium version of it, your plastic gun will not stand a chance when you end up in combat with your attacker. Again, your paintball marker is not the only thing that can separate you from life or death.

Lastly, just because you are a known marker for your mates in paintballing sessions or you have adequately read our information guide, you won’t have a paintball gun with you every time. You won’t even be inclined to bring one where you go. Unless you’re going to play paintball, then you’ll bring a marker, but if you aren’t, why would you bring it along in public? That means if the crime is outside of your home, then a paintball marker will not be of use to you. You still have to rely on basic self-defence skills.

So can you use a paintball gun for self-defense? Yes, you can especially when you know where to shoot and if the crime happens in your home and you have your marker with you. However, a paintball marker is very inconsistent and it shouldn’t be your last hope when you’re trying to defend yourself. At the end of the day, basic self-defense skills will help in saving you and your loved ones’ lives.

The article is provided for information only and is not intended to be used as a guide or an alternative to your or your loved one’s protection. Any form of self-defence technique that might result in being harmful needs to exercised with caution and would need adequate authorised training.