Can You Wakesurf Behind Any Boat? 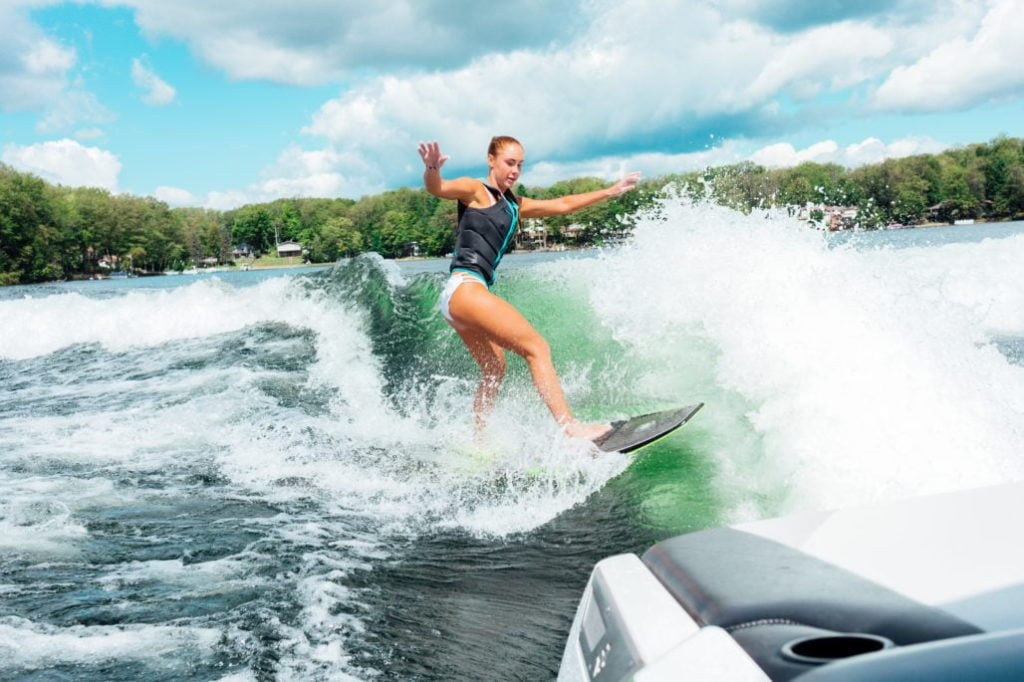 The short answer – a big NO. Why? The main reason is your safety. Is it possible or doable? For sure, but if you don’t choose your boat carefully, it could mean disaster.

Wakesurfing is a fun and exciting water sport. It’s a hybrid between wakeboarding and surfing. Don’t be confused as wakeboarding and wakesurfing are two different watersports. So, what’s the difference? With wakeboarding, you are pulled by a motorboat throughout the entire extent of your water stunt. With wakesurfing, the motorboat drags you at the beginning, and at some point, you release the rope then ride the wave out.

Safety should always be a top priority in any sport. The biggest factor that will contribute to your safety is the boat that will pull you. To be able to surf on the boat’s wake, you have to stay closer to the back of the boat or its stern. Therefore, you have to choose your boat carefully.

Why? Because if the boat has a propeller out its back, it could cause you some serious injuries, or worse, death. But aren’t all motorboats run with propellers? Yes, and that’s what you’re about to learn next. There are only certain types of boats that you can wakesurf up safely. 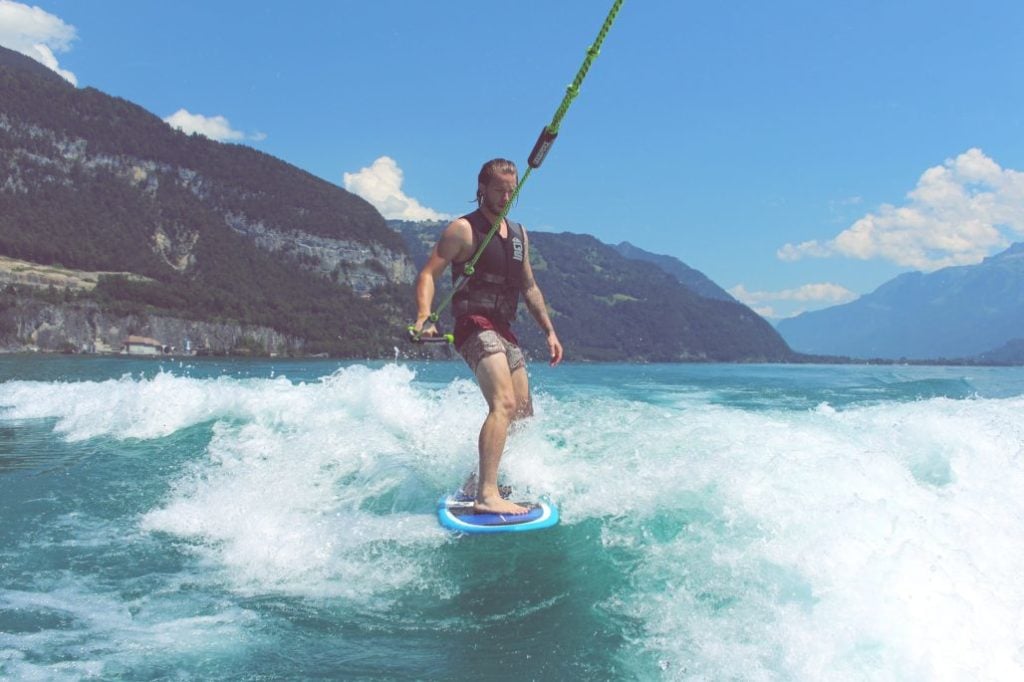 So, what are the safest boats that you can wakesurf with? They are the inboard direct-drive and inboard v-drive boats. Both of these boats are designed to have their engines and drive units inside the hull. The propeller protrudes under the hull just below the transom. With this design, the wakesurfer is unlikely to hit the propeller.

Boat Types that are a Big No to Wakesurfing

If there are boats safe to use for wakesurfing, there are also dangerous ones that you should avoid. So, what are they? They are the outboard boats and inboard/outboard boats. It’s because the mounting design of the propeller protrudes at the boat’s back. If you can see an actual boat, you’d figure that the propeller would be too close to the surfer.

To give you a clearer picture of an outboard boat, imagine the engine mounted outside, just on top of the transom or the end part of the boat. The propeller sticks out at the lower end of the engine. Got the picture? Another disadvantage of an outboard boat is that the fumes from the engine exhaust may be inhaled by the wakesurfer.

Overrated Risks of Wakesurfing Behind an Outboard and Stern Drive Boat

Aren’t the risks involved in wakesurfing behind an outboard and stern drive boats just overrated? This question is often asked by newbies who tend to believe that there’s no way that the propeller could catch them as the boat is constantly moving forward at high speeds. And yes, some daredevils have done stunts behind these dangerous boats. But the concern here is the safety of the wakesurfer, not to impress or show off.

Here are some facts regarding the dangers of riding behind an outboard or a stern drive boat. Although the boat runs at a steady speed, the carving up and down the wave of a wakesurfer varies in speed. A surfer can go so fast and may catch up with the boat. At these speeds, a wakesurfer can go faster than the boat and fall. The next thing unimaginable thing to happen is the wakesurfer being cut by the propeller.

Still not convinced? Here’s another scenario where the risk involved is not just overrated but real. There are some expected moments when the boat slows down. It can be a drag from the waves or the wind, so what’s next? The wakesurfer riding the wave at a high-speed could catch up with the boat and hit the propeller.

You see, falling into the propeller is a real possibility and not just a make-believe scenario. One proof that wakesurfer can catch up on the boat is when you see them making stunts. Have you seen wakesurfer grabbing a beer while the boat is maintaining the same speed? It’s proof of how a surfer can easily catch up on a speeding boat.

To have a better wakesurfing experience, one would need a good wave size. And the direct-drive and v-drive boats are perfect for creating big waves, which can be safely ridden by a wakesurfer. These inboard boat types have a flat-bottom stern. They are heavily ballasted and deep, which allows them to dig hard into the water and create such a huge wave perfect for wakesurfing.

On the other hand, an outboard boat design is not suitable for creating big waves. It is due to the v-shaped hulls, which are common for outboard boats. However, it’s not impossible for an outdrive boat to create big waves. But some modifications and setup are needed just to create a bigger wave. But why bother yourself to set up some boat modifications when you can get a boat perfect for wakesurfing?

A Few Important Things to Remember Before You Wakesurf 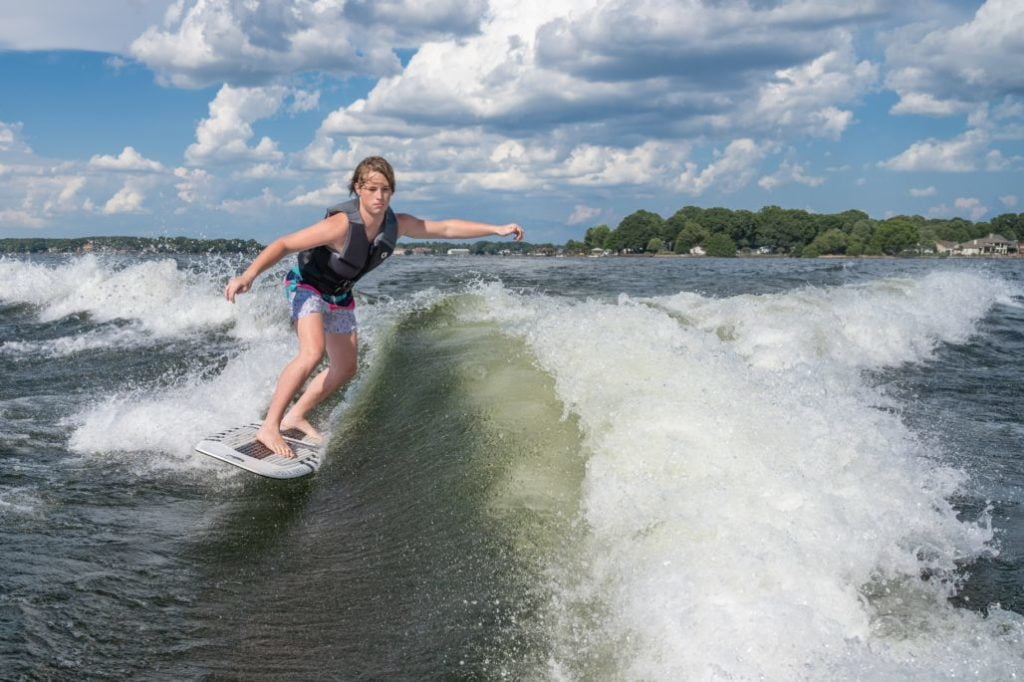 As mentioned earlier, wakesurfing is a fun and exciting water sport. It’s also a safe sport given the right preparation and safety precautions. Here are a few important things to keep in mind before riding the wave.

Setting up the Ballast

A ballast is a part of a boat where water or some other heavy objects are stored. It functions as a compartment actually and is typically located towards the rear of the boat. Proper ballast setup is crucial to help the boat create bigger waves. Therefore, by adding weight to the ballast, the water drag increases thus, producing a higher wake.

However, keep in mind that putting in more weight may affect fuel economy. Furthermore, it may slow the boat down, making it ineffective in creating huge waves. For an ideal wake to be produced, place some fat sacks or ballast bags at the end corner of the boat for which you’ll be wakesurfing.

You’ve already learned about which boats are safe to use in wakesurfing. Again, for the sake of your safety, use inboard engine boats. Remember the old saying, better safe than sorry. You may also want to consider the types of the boat with regards to their intended use. Call to mind that not all boats are created equal.

There are boats designed for fishing, sporting, racing, and cruising. But regardless of the design, the more important factor is that you need a boat that can produce waves optimal for wakesurfing. You might also want to consider a boat that can go at high speeds. However, racing boats, though having the ability to go at high speeds are not powerful enough for towing.

So, what’s your best option? You have to be looking for something hydrodynamic and lightweight, which is more likely to create a highly surfable wake. And what type of boat is that? Sporting and cruising boats are your best options.

The Type of Tow Rope

Although the tow rope will only be needed in the initial stage of the wakesurfing, its design and how it’s connected to the boat are very crucial factors for your safety. Of course, you need a specific length, which is much shorter than the rope used for wakeboarding. Some wakesurfers use about 15 to 20 feet of rope length. Additionally, don’t overlook the way the rope is tied to the boat.

Staying Safe While You Wakesurf 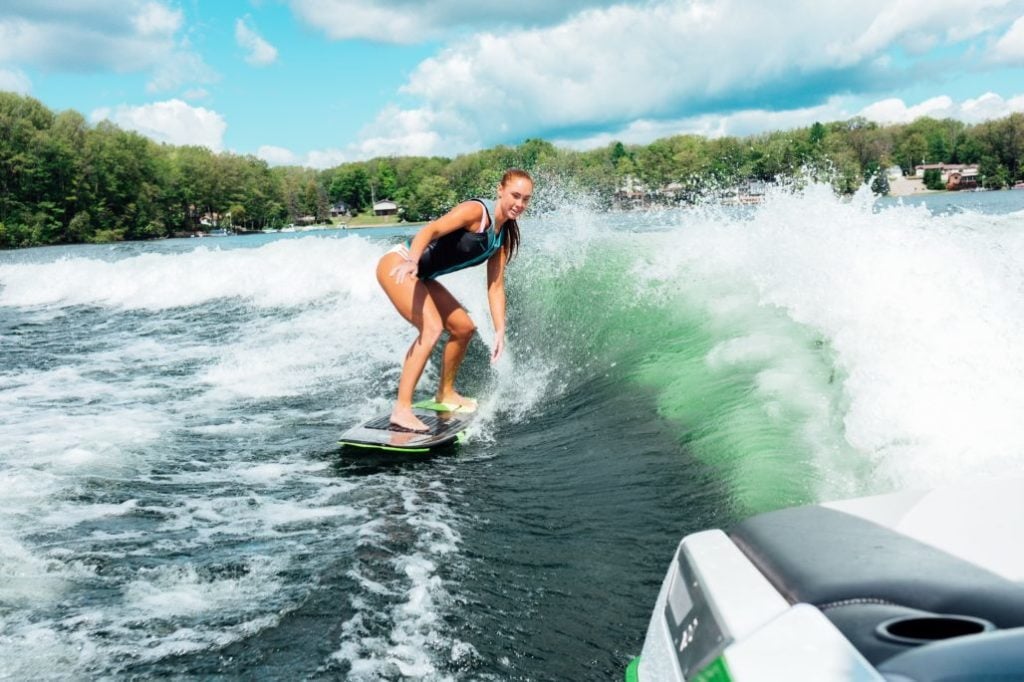 So you got it all set up? You have the right boat, the correct tow rope, and the ballast all properly set up. The next important thing is to stay safe while you wakesurf. And to do this, you have to wear proper gear, of course. Aside from having a good quality beginner’s wakesurfing board, you should properly wear a life vest and a wakeboard helmet.

Are you really ready for wakesurfing? Make sure that you already have undergone proper training from professional trainers. You don’t just go out there and ride like a daredevil without any proper training. You’d be spelling out disaster if you do.

Finally, make sure you’re with the right crew. Wakesurfing is not a one-man water sport and you have to rely on and trust the man behind the wheel. Risking your life with an inexperienced crew is simply a bad idea. And again, practice diligently and wakesurf with discipline. Who knows? You could become one of the greatest wakesurfers in history.