How do You Repair Your Paddle Board? (Easy Peasy!) 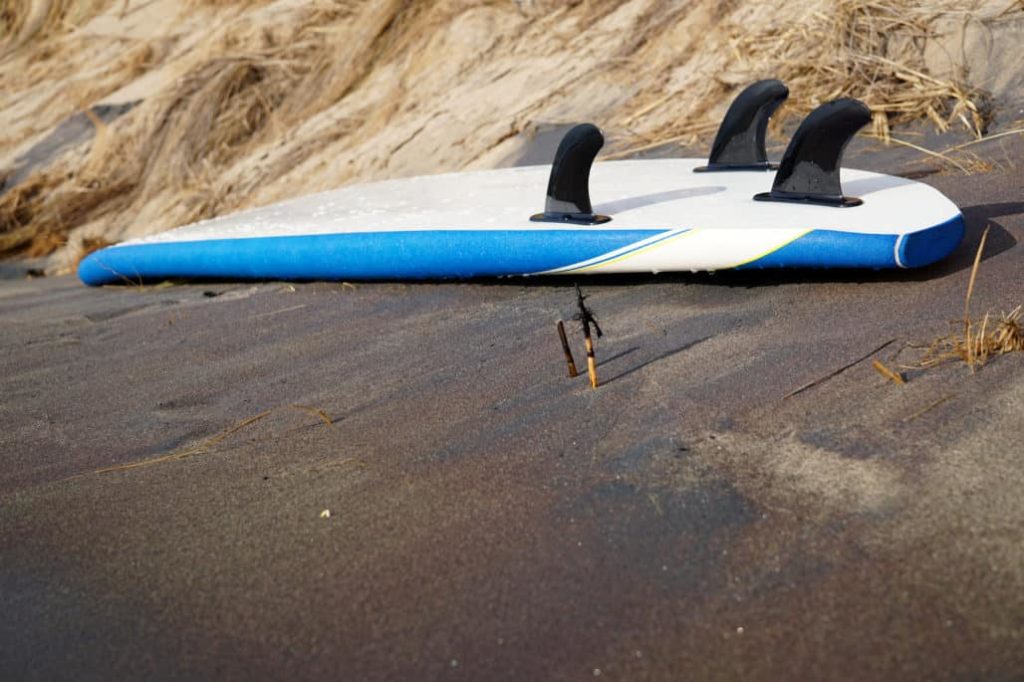 Dents and dings are usually minor damages on a paddle board. They’re so minor that you can repair them by yourself. What’s even better is you don’t need a lot of tools to get it done.

Things You’ll Need for a Paddle Board Repair 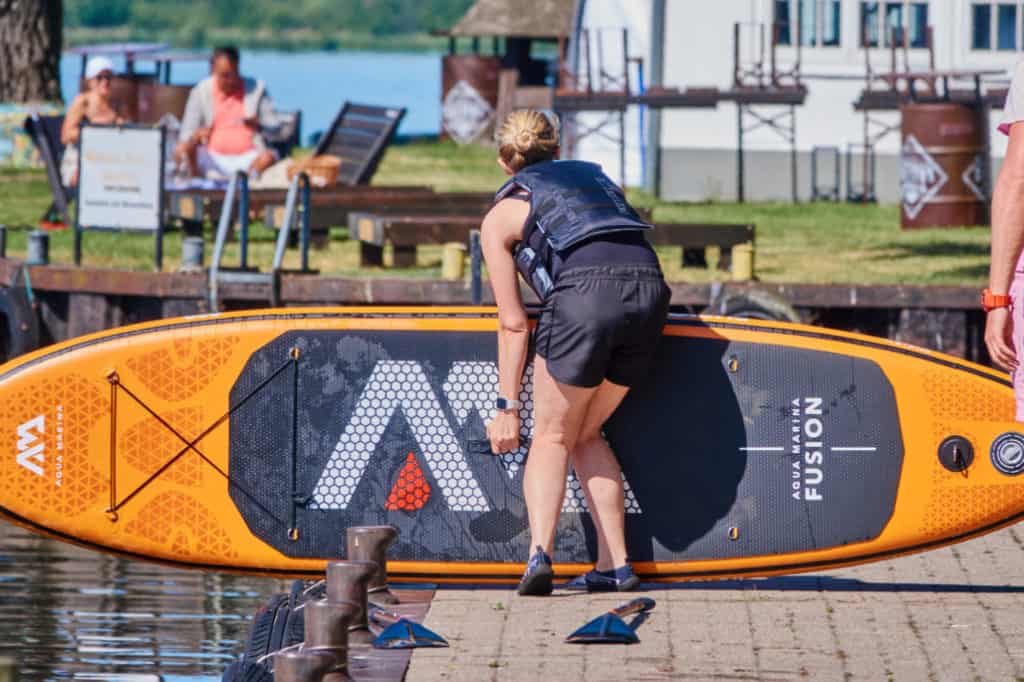 There are five things you’ll need when you are going to repair your paddleboard, namely, a utility knife, sandpaper, clear packing tape, popsicle stick, and an epoxy resin.

The most important material you’ll need for this one is epoxy resin. Take note – it’s not just resin but it’s epoxy resin. The two are different. The first one is the material you use for molding things like coasters, cases, organizers, etc. The second one is used for coating. You’ll often hear about epoxy resin when you need to fix an appliance or you need to cover a dent.

How to Repair a Minor Ding or Dent 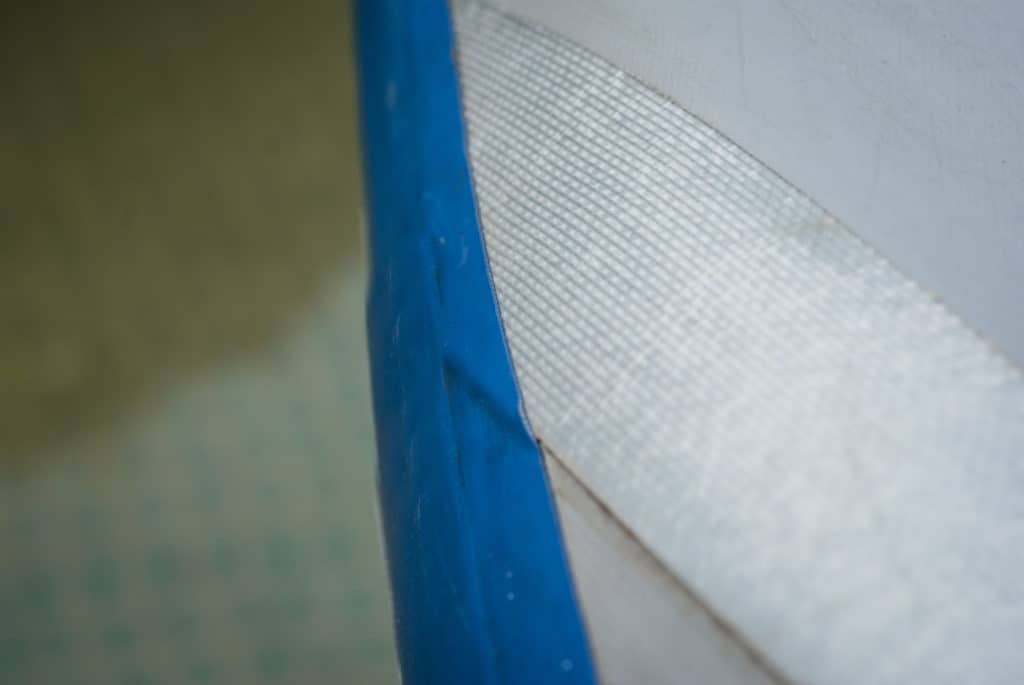 Have all the materials you need? Here is a step-by-step guide to help you repair your board.

1. Let your paddle board dry.

When you see that a puncture or dent was made on your board, don’t get anxious. This really happens. If the dent or ding is minor, the first thing you have to do is to just let it dry. Let the whole board dry for that matter. If you’re in a warm place, then it won’t take a lot of time for the whole thing to dry.

Just because the paddle board’s surface is dry doesn’t mean that the inside of the ding is. To make sure there isn’t water inside the ding, get a piece of paper towel and fold it so that the corner can fit the ding. You don’t need the whole paper towel for this, just a small part.

3. Cut out the punctured part.

Once you’re sure that there’s no more water inside and outside the board, then it’s time to prep it for the epoxy resin.

With the use of a utility knife, cut out a small part of the area surrounding the ding. When you cut the sides of the ding, don’t go all the way down the board. You won’t be cutting out through the whole board. Instead, you’ll just “slice” a small part of it. Think of it as slicing a pizza.

It’s important to remember that you’re just cutting the damaged parts. If it’s not damaged, no need to include it. You only want to remove the areas with dents and dings so that you can cover them with resin.

No, you won’t be sanding the nose and the tail. You’ll be sanding the part that you just cut from. It’s highly recommended that you use medium grit sandpaper. What’s the point of sanding? When the corners are sanded, this allows the epoxy resin to hold better inside and outside the board.

To sand the area where the ding is, just slowly move the sandpaper back and forth until the corners are smooth enough. There shouldn’t be other debris off the board’s material except for the foam inside it.

5. Get a small amount of foam out.

This step is optional but a lot of experts say foam that’s spread near the edges makes the epoxy resin cover more parts, including the inner area where the ding reached.

To do this, take the utility knife again and get a part of the foam inside the ding, and spread it to the exposed area near the corners. You don’t need a lot of foam, just a small amount so that the epoxy resin can hold.

A lot of epoxy resins are found in hardware stores. Depending on the dent you have, you might only need a small bottle. You can also buy a medium-sized one for future dings that you will be repairing.

Pour an ample amount of epoxy resin on a piece of cardboard and using a popsicle stick, mix it well. This will help prepare the epoxy resin so that it can do its job in filling the ding and covering it up.

7. Place epoxy resin over the ding.

The great thing about epoxy resin is that it’s liquid enough to go deep down the damaged area. But unlike other liquids, epoxy resins harden and conceal the open area.

8. Cover the damage with packing tape.

When you have enough epoxy placed inside the dent, cover it with packing tape. Wait, shouldn’t you dry the epoxy out for it to do its job? That’s what a lot of people think. While most of the time epoxy resins need to be dried out, this isn’t’ the case for paddle boards.

Placing packing tape on top of the dent reduces the sanding that you have to do. In other words, it “shapes” the epoxy so that it doesn’t produce a bump on your board. In effect, the epoxy is forced to take the shape of the side of the board that’s been damaged.

10. Peel away the packing tape when it’s dry.

Depending on the epoxy resin you use, drying takes at least an hour to a full day. To be sure that the resin has dried, remove the packing tape after 24 hours.

Once you remove the packing tape, sand down the excess epoxy resin that has formed bumps on the board. The ideal outcome is the resin has fully covered the ding. It should also be in a similar form to the board.

Tips in Repairing Your Paddle Board 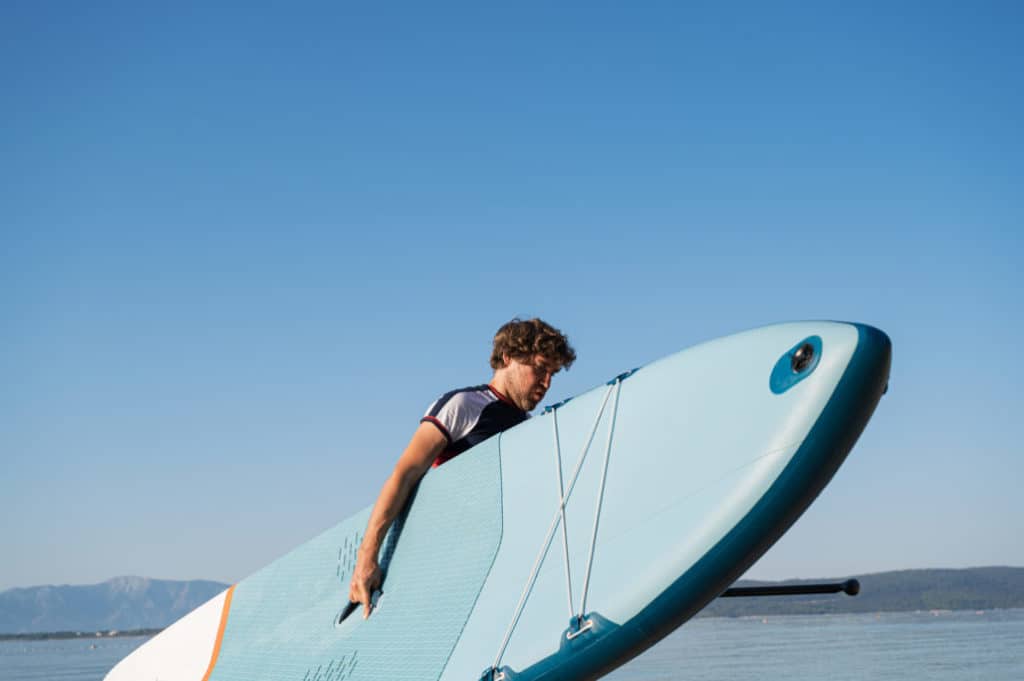 Repairing your paddle board is relatively easy. You’ll notice that apart from sanding down the board, there isn’t any step that requires you to put so much effort into it. But there are still other ways that will help you make the whole process easier and faster. Here are some tips.

First, make sure that you’re repairing your board in a less humid area. Take it away from the sea and the shore. Take it home if you have to so that you’re sure that it’s away from saltwater, dust, sand, and humidity.

The reason why you need to do this is because humidity can delay the drying time of the epoxy resin. Some epoxy resins claim that they’re the “quick-dry” type, but you don’t want to risk damaging your board even further. The safest way is to just repair it in a totally dry place.

Another tip is that you should always sand the damaged areas of the board. This smoothens the board up and makes sure that it looks good as new. Yes, even when there’s a ding right on it. You’re only to sand the board when you remove the damaged area and when you peel off the packing tape.

What About a Broken Fin Box? 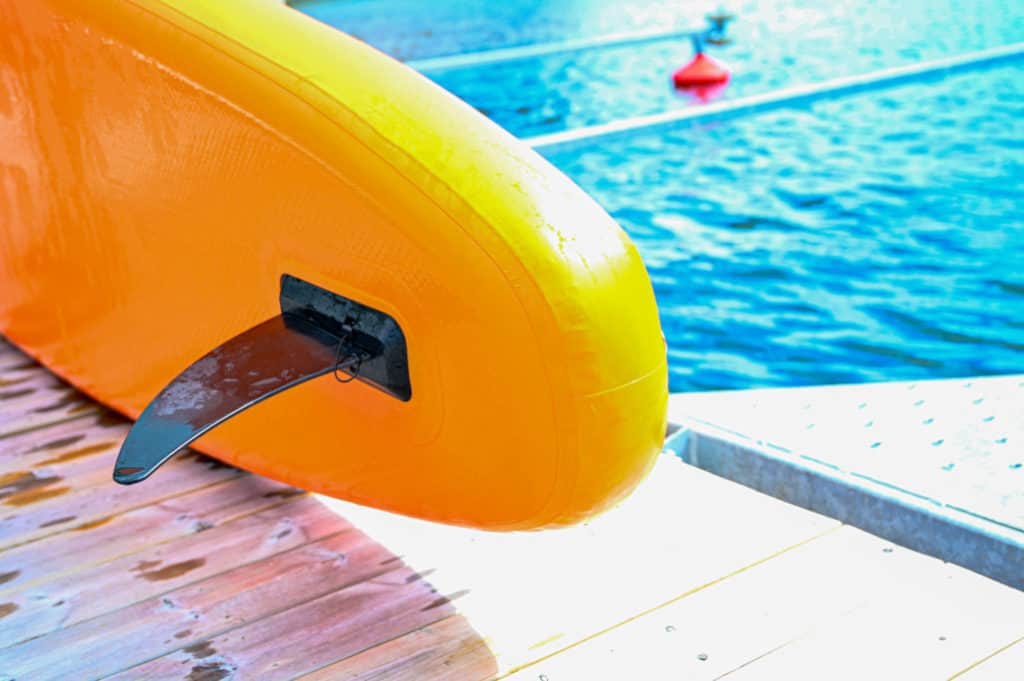 Your board is not the only one that gets damaged. While it’s not common for fin boxes to have damages, it happens over time. It can be due to overuse or simple wear and tear.

To help you repair your broken fin box, here are some steps. You’ll notice it’s a lot similar to how you repair a ding.

1. Check the angles with the fins on.

Paddle boards always have three fins, so if there’s one fin box that is damaged, you’ll know. How?

First, you have to measure one fin box against the other. Get an angular ruler so that you can check if the fin and the box are still at a perfect perpendicular angle to each other. You can check the fin against another one so that you have a reference on the right angles they are on.

When you’ve seen an off-angle, check the fin box. Look for bumps, raises, or dents surrounding it. Press the fin box itself to check if one part of it goes down or if it’s a little loose.

As you probably know by now, sanding is a very important prep work for your board and fin box. For the latter, you have to sand the whole area of the fin box. This removes the bumps and the weak spots.

The ideal sanding tool that you need is an 8-inch hard pad with 60 grit. However, this isn’t a common tool and most likely you won’t have this kind of equipment at home. Don’t worry, a simple medium grit sandpaper will do.

When you sand the fin box, just be gentle. If you have the hard pad, don’t press too hard down the fin box. You don’t want the force to create dents. The same goes for regular sandpaper. Just sand it enough to remove the minor damages.

For this part, you’re only going to remove the hardened wax, hardened cloth, et cetera. What you’re looking for is the plain fiberglass that makes up your fin box. When you remove all the loose parts, you’ll be able to see which parts around the fin box are bumped up or have a dent.

In the next step, you’ll put some epoxy resin which is why it’s important to cover the parts where you don’t want any resin to spill. For example, you are just going to repair one side of the fin box. This means that you have to cover the actual hole of the box with tape. You should also cover the other parts of the board with tape so that the resin won’t spill there.

Using a popsicle stick, mix the epoxy and the resin. There will be directions on how to prep the epoxy depending on the brand you bought.

7. Place the epoxy on the damaged part.

When the epoxy is ready, add it onto the part with a dent or damage. Pour it over the part to make sure that it is flat. What you want is a flat layer of epoxy resin over the fin box. When you’re satisfied with your work, let the resin dry off.

8. Sand down the epoxy resin.

Before removing the tape, sand the area where the epoxy resin has dried off. This ensures that the whole part is smooth and perfectly laminated. The sand will also help blend the whole thing together.

And that’s it. These are all the steps to repair all the minor damages that can show up on your paddle board.