Gauge Vs. Caliber: How To Measure Up Your Shotgun’s Performance 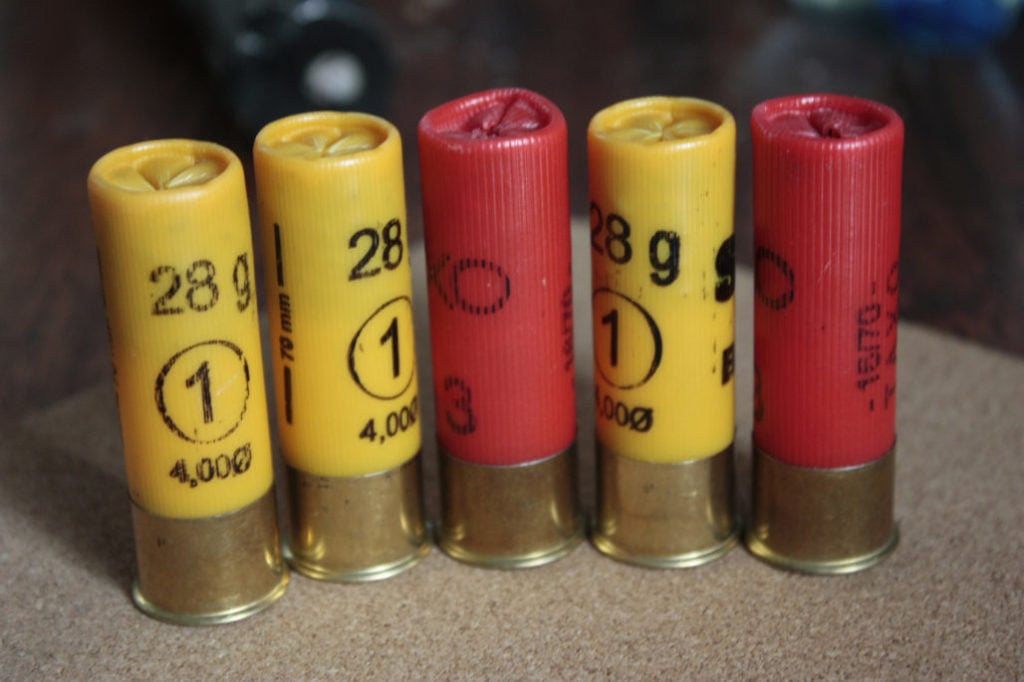 Shotguns are ubiquitous in the hunting world. They’ve been around since the 1800s, but their popularity and use have only risen in the last few decades. In the U.S, there are more than 20 million shotguns registered and roughly 7.8 million people hold a current hunting license.

Perhaps the best part of shotgunning is that it’s not a one-shot-one-kill weapon; it can take down multiple targets with a single shot. However, guns are not just made out of steel and wood; they are also composed of a whole bunch of numbers and letters.

These numbers and letters of a shotgun, in fact, are what determine if it is an efficient weapon or not. Notably, gauge and caliber are some of the most crucial elements of shotguns.

Gauge vs. caliber has always been a hotly debated topic among firearms enthusiasts. While the two terms refer to the size of the shotgun’s bore, they’re commonly confused due to their similarities in that both are expressed in numbers and are often associated with ammunition.

This brings about the need to understand the difference between the two, especially when you have a shotgun. After all, that’s how you get to pick the best shotgun for your needs based on your ability to accurately distinguish between these measurements.

If you want to improve your shotgun handling and become a better player, this post is for you. We will discuss everything you need to know about gauges and calibers and how you can improve your shotgun performance and probably stand a chance to bring a turkey for dinner.

Gauge and caliber are two terms that are often used interchangeably, but they actually refer to two different things. Gauge, in simple terms, refers to the diameter of the bore of a firearm, while caliber refers to the diameter of the bullet. In other words, a gauge is a measurement of the inside of the barrel, while a caliber is a measurement of the outside of the bullet.

The Meaning of the Term “Gauge”

Quite simply, a gauge can be defined as an instrument for visually displaying the level, volume, or content of something. It can as well represent the diameter of something, such that the smaller the number of the gauge, the greater the diameter.

Therefore, the size of something can also be measured by its gauge number. A 12-gauge cable, for example, is wider than a 16-gauge electrical wire. The shorter the object, the larger its gauge number. Some people may find this contradictory; however, there are reasons for it to be so.

Coming down to shotguns, the gauge refers to the diameter of the bore and is expressed as the number of lead balls that equal one pound.

A 410 gauge shotgun is simply a misunderstanding of the term “410 calibers.” The “gauge” refers to the diameter of the bore, or the inside of the barrel, and not the actual size of the shot.

A 410 caliber shotgun is a type of firearm that uses .410 bore shells. These shells are actually smaller in diameter than traditional 12 gauge shells, which is why they’re often used for hunting small game or for self-defense. But don’t worry; we’ll cover this in detail thereinafter.

The History of the Term “Gauge”

Invented in 1849 by the brilliant watchmaker and engineer Eugene Bourdon, gauges were originally used as a measure of thickness in the British iron industry. This was at a time when there was no other way to universally describe or measure thickness, so gauges became a way to do so in fractions of an inch. Today, French people still revere Bourdon for his brilliant invention.

As for the shotguns, the naming patterns for the gauges can be traced to the ancient, “black powder” days, when cannons were prescribed according to the weight of the pellet they shot rather than the diameter of their bore.

In the early 20th century, ammunition companies began describing the amount of powder loaded in a shotgun shell in “dram equivalents” after moving away from black powder to smokeless powder. Although it was an imprecise way of doing things, it allowed them to more accurately describe the velocity of the load.

However, smokeless powder is much more powerful than black powder, so you should never use “drams” or “drams equivalents” to reload such shotgun shells. Always follow the data from a good reloading manual when reloading shells.

This can be seen when looking at the naming conventions for these types of weapons, where projectiles that weighed 12, 8, or 4 pounds were named according to their bore size.

For example, black powder weapons with large bores are named based on the bore size. Interestingly, this is also where the shotgun gauge measurement system comes from.

The bore size of a gun can be determined by the weight of the lead shot or lead ball that it can fire.

In another scenario, the bore size of a twelve gauge shotgun will be equivalent to the dimension of the stated 1/12 pounds ball. Meanwhile, the bore dimension of a ten gauge model will be equal to the diameter of the 1/10 lead ball. i.e. the bore and the lead ball have an equal diameter.

Just as you would expect, a lead ball of twelve pounds will e greater in diameter compared to a lead ball weighing 8-pound and with the same material. The same case applies when comparing a ten gauge lead ball with a twelve gauge ball.

However, there is an exception to the rule that all shotgun bores are named after their gauge number. The bore in .410 is actually described based on the bore size, which is .410 inches in diameter. So, in case it was described like any other common shotgun option, it could fall around 67 gauge.

How is Gauge Measured?

Wire gauge sizes are expressed numerically by the American Wire Gauge (AWG) standard. However, these AWG numeric values are only regarded as a guide, and not an exact measurement as computing the precise AWG can be time-consuming and extremely difficult.

Nonetheless, wires with minimal turns are generally associated with a greater diameter, and the salesperson should provide you with a gauge measurement.

An interesting fact is that nearly half of all shotguns sold in the U.S are 12-gauge models. The downside to these options, however, is that they’re known to create a lot of noise and shooters should always wear proper hearing protection while using them.

A shotgun gauge is a unit of measurement used to illustrate how much lead a shotgun can fire in a single round. The gauge is basically the number of lead bullets of a particular diameter equivalent to 1 pound.

For example, a 12-gauge shotgun would easily fire 12 lead bullets that are the size of the shotgun bore in a single round. The larger the gauge, the more lead pellets can be fired. Since a pound is comprised of some of these balls and shells, the larger balls tend to have a lower unit price.

12 gauge shells are generally considered more efficient than the smaller gauges because they have a shorter shot column. Basically, fatter 12 gauge shells will easily fit the same weight of shot into a shorter column, which creates minimal shot deformation while traveling down the barrel.

The Meaning of the Term Caliber

The caliber of a shotgun is the metric used to measure or determine the diameter shotgun barrel’s internal diameter or rather the inner barrel dimension. It is also used to show the diameter of the shotgun’s ammunition. However, there is more to it than just inches and millimeters.

For example, the diameter of a 9mm luger bullet with its inner barrel is approximately 9 mm. However, due to marketing considerations, the numbers could be rounded off to the nearest whole value; thus diameter could be slightly higher or lower in comparison to the stated value.

But this doesn’t have any effect with respect to this, given that the inner barrel diameter and bullet dimension need to be as close as possible.

Another example is the 7.62 NATO/.308 win bullets. These ones measure 0.398 inches in diameter and this caliber measurement allows the bullets to fit precisely into the shotguns.

One more thing worth mentioning is that .410-gauge shotguns simply don’t exist. The reason for this is that 410 caliber shotguns can fire a shell that is approximately 0.410 inches in diameter and that is mainly why it’s measured in terms of caliber rather than gauge.

How to Measure Caliber?

Caliber-the metric/measure used to tell the diameter of the shotgun barrel- is measured in thousandths, hundredths, or millimeters and is described in these units.

It is important to keep this in mind as there’s no set standard for caliber values. The spacing within the shotgun and the diameter of the bullet are two elements often used to show the caliber.

The most common shotgun gauges are 10, 12, 16, 20, and 28. The number refers to the number of lead balls that fit snugly in the bore that is of a similar diameter as the bore itself. So, a 12 gauge shotgun has a bore with an exact diameter of 12 lead balls where each weighs one ounce.

Slack is important because it allows the shotgun to fire multiple rounds without jamming. Else, if the bore were the same size as the lead balls used to measure gauge, the shotgun would quickly become jammed with residue after firing just a few rounds.

So, when you’re looking at shotgun gauges, keep in mind that the actual bore size is slightly larger than the gauge. This is normal and necessary in order to keep the shotgun from jamming.

Note: the actual diameter of the bore can vary slightly from the standards set by the Sporting Arms and Ammunition Manufacturers’ Institute (SAAMI). The published standards are based on a smooth barrel and therefore have tolerance of +.51mm (.020”). This is just one aspect to keep in mind when choosing a shotgun. Otherwise, there are many other characteristics to consider as well.

Arguably, the most important factor to consider when purchasing a shotgun is what kind of ammunition it will shoot. This will be influenced largely by the intended purpose of the gun. For example, hunting requires a different type of shotgun than trap or skeet shooting.

Once you know what kind of shotgun you need, Gauge vs. Caliber becomes an even less important distinction. Both measurement methods share a significant deal of similarities, so, understandably, people might get them mixed up. However, we hope that we’ve made things quite clearer for you now. Choose a shotgun that best suits your shooting style and discipline.

History of Clay Pigeon Shooting: The Origins of Trap and Skeet shooting

Trap shooting vests: how to find the right fit?

The Ultimate Beginner’s Guide to Trap and Clay Pigeon Shooting