A Brief History of the Venice Carnival and Its Traditions 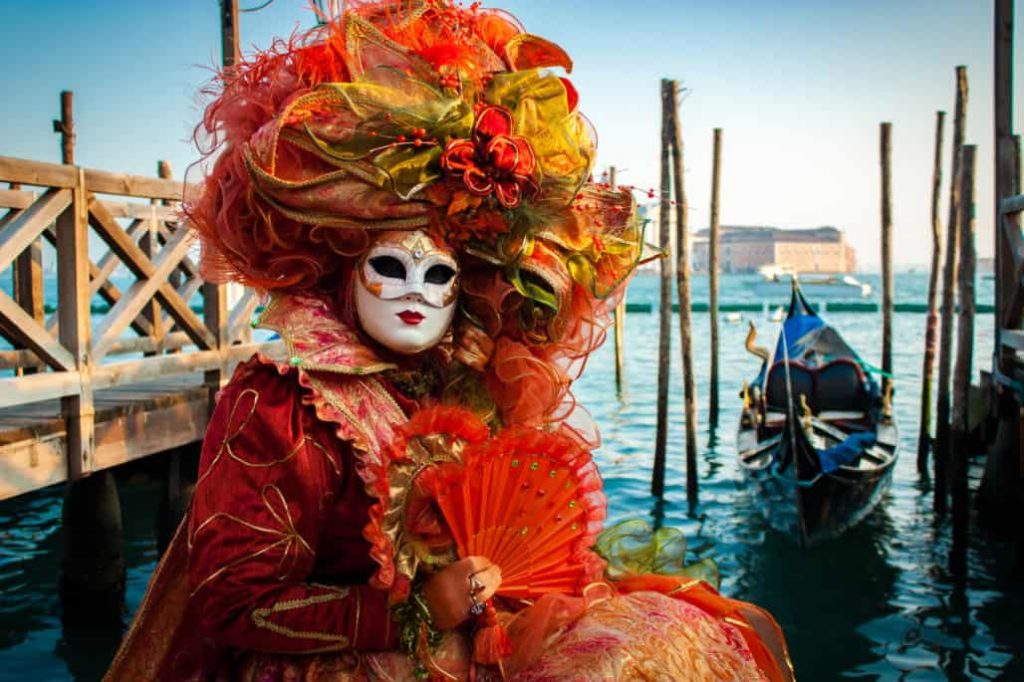 “A Carnevale ogni scherzo vale” — any joke goes at Carnival.

This famous Italian common saying embraces the carefree and irreverent spirit of the festival. Ever since the Middle Ages, when Carnival represented the last opportunity to enjoy food and drink and have fun before Lent, a period of fasting and penance, this festival celebrated the playful side of human nature.

Traditionally, the Carnival season was also a time for unruliness, exaggeration, and mockery of power. During the festival, social rules and behavioral norms were suspended. Indeed, from an anthropological perspective, Carnival is one of the many “cyclical rituals of disorder and social rebellion” that can be found in many cultures throughout the world.

In Italy, Carnival has always been one of the most popular festivals. While every Italian city, however small, has developed its own Carnival traditions and customs, the Venice Carnival is the most famous. In the 18th century, it became the most visited Carnival in the world. Each year, thousands of visitors arrived in Venice to soak up the unique and transgressive Carnival atmosphere of the floating city.

"Farewell to the Meat." The Origin of Carnevale. 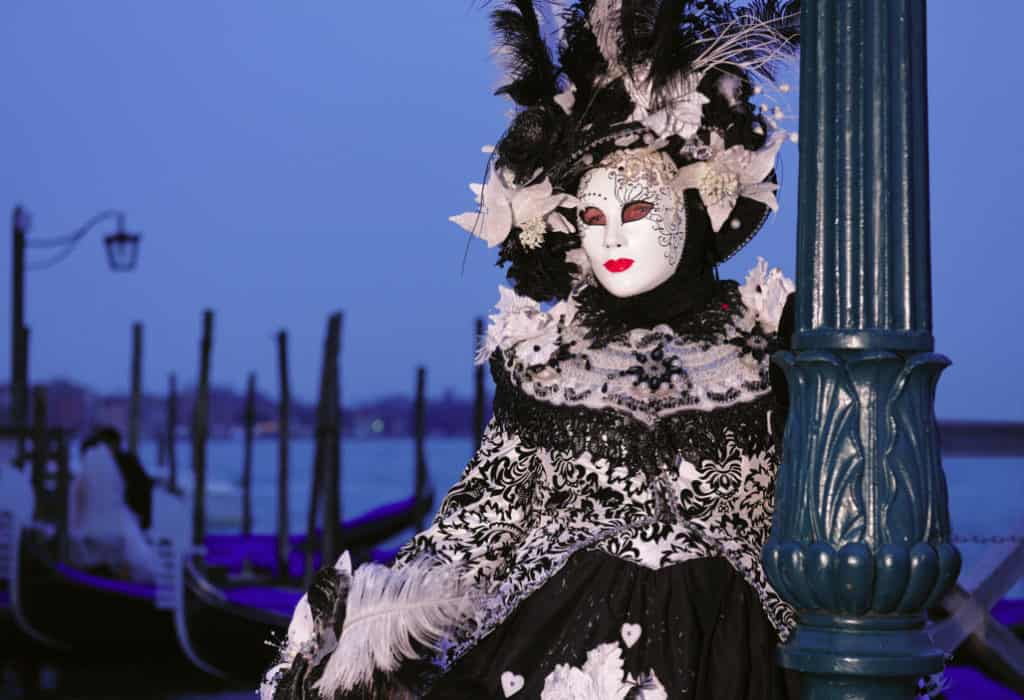 The word Carnevale, Italian for Carnival, was first recorded in the texts written by Matanzone da Caligano, an Italian jester and poet, at the end of the 13th century.

Others link it to the carrusnavalis, a boat-shaped carriage carrying masked men and women that was paraded through the streets of ancient Rome during the Saturnalia festival.

Though there is insufficient historical evidence to declare that the Saturnalia festival is the direct forerunner of the Carnival festivities, many scholars point out that the two feasts share the same unruly and irreverent spirit.

During the Saturnalia, for example, the ancient Romans indulged in the pleasures of the flesh. Slaves were allowed to insult their masters.

In Lucian’s Saturnalia, a fictional dialogue between Saturn and the author, the god himself describes the spirt of the feast held in his honor: “During my week the serious is barred; no business allowed. Drinking, noise and games and dice, appointing of kings and feasting of slaves, singing naked, clapping of frenzied hands, an occasional ducking of corked faces in icy water–such are the functions over which I preside.”

The Origin of the Venice Carnival and Its Traditions 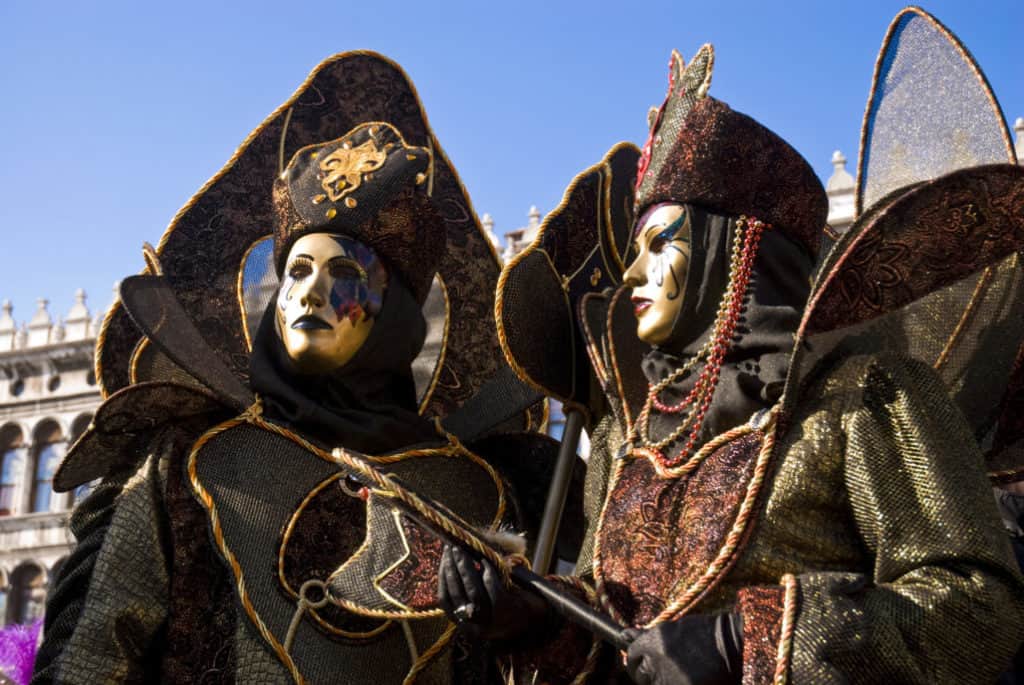 In the Republic of Venice, the word Carnevale was first recorded in a 1094 document issued by the Doge Vitale Falier. In this decree, the Doge allowed Venetians to take part in public Carnival festivities before Lent. According to legend, in the same year, the body of St. Mark miraculously reappeared in a pillar of the Basilica.

However, some scholars claim that the actual origin of the world-famous Carnival festivities in Venice must be traced back to 1192, when Venetian citizens gathered in St. Mark Square, the heart of the city, to celebrate the military victory of the Serenissima over the Patriarch of Aquileia. This theory seems to suggest a political rather than religious origin of the festival.

The history of the Festa delle Marie, one of the most famous events of the Venice Carnival, is even more ancient than the history of Carnival itself. In the Middle Age, on February 2 (Candlemas), twelve beautiful and poor girls and their fiancés received a blessing for their marriage in the Basilica of St. Peter of Castello.

In 943, a group of pirates broke into the Basilica and kidnapped the young women. They were later rescued by a group of noblemen led by the Doge himself. To commemorate the event, the city established a parade composed of twelve beautiful girls from its poorest families. In 1343, twelve wooden figures were paraded through the city streets. The citizens weren’t pleased and expressed their dissatisfaction by pelting them with stones and rotten food.

The Flight of the Eagle, the most spectacular event of the Venetian Carnival, was first performed in the mid-16th century, when a young Turkish acrobat reached the top of the bell tower in St. Mark Square by walking on a tightrope fixed to the nearby pier.

He then reached the balcony of Palazzo Ducale to render homage to the Doge. Initially called Svolo del Turco, Italian for “flight of the Turk”, the performance became a permanent feature of the Carnival celebrations. During the 1759 Carnival, the event ended in tragedy when an acrobat crashed to the ground. After that, the Venetian government decided to substitute a wooden dove for the acrobat. Thus, the event was renamed the Flight of the Colombina, Italian for little dove. 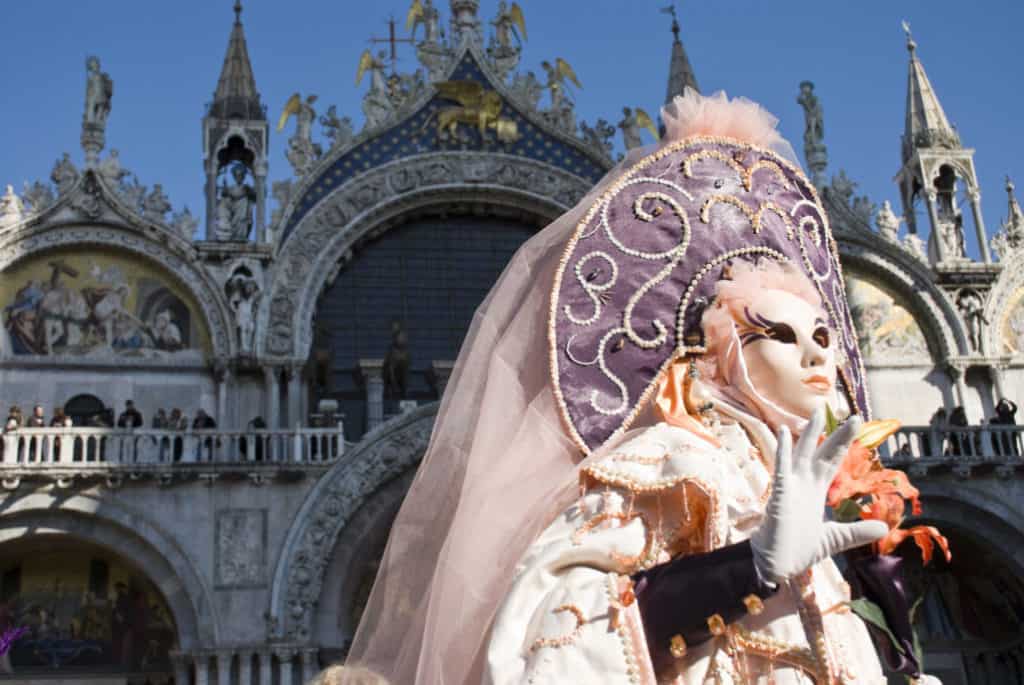 While masks are a constant feature in many Carnival celebrations, the Venetians developed a unique and elaborate “mask culture.” Originally limited to the 6-week Carnival festival, the Venetians started to wear masks through Lent and beyond as means to protect their identities and act more freely.

Soon, the habit of wearing masks became so widespread that the guild of the mascherari, Italian for mask-makers, began to enjoy a special position in the Venetian society.

Though it is still unclear how the the “mask culture” started to develop, many scholars link the immense popularity of masks to the rigid social structure of the Serenissima. Masks allowed the Venetians to interact and do business with each other while hiding their social status and identity.

Eventually, the Venetian government started to regulate the use of certain masks. For example, the Bauta, the oldest and most iconic Venetian mask with a square chin and no mouth, was required by law in certain political decision-making events to preserve the voters’ anonymity.

Tough masks created a level playing field, they were also useful for illicit and criminal purposes. For example, many Venetians wore elaborate masks to escape their creditors, break into churches and convents, and conduct their illicit affairs.

In his memories, Casanova, the famous Venetian adventurer and libertine, writes that during the 1745 Carnival, he and a group of friends pretended to be members of the Council of the Ten, the body tasked with maintaining security, and arrested the husband and relatives of a beautiful noblewoman. Eventually, the Republic of Venice gained a reputation for luxury, sexual promiscuity, and moral decay.

The authorities tried to limit the abuse of masks with a series of official decrees. The word “mask” was first recorded in Venice in a 13th century in a decree that forbade masked men to throw oviodoriferi, Italian for scented eggs. In the 15th century, the abuse and misuse of masks was so widespread that the government made it a crime for masked men to break into convents to commit multasinhonestates, Italian for “many indecent acts”.

In the 18th century, when the Venice Carnival was at the height of its fame, the authorities limited the use of masks to three months a year and introduced heavy (and humiliating) penalties for breaking the Carnival rules.

In 1797, the citizens of the Republic of Venice celebrated their last Carnival. After the fall of the Serenissima, the French and the Hapsburg, that ruled the former Republic, banned Carnival celebrations as they feared the unruly spirit of the festival could lead to political and social upheaval. The Carnival of Venice was officially restored in 1967, almost two centuries later.

Though scholars agree that Carnival allowed a temporary suspension of social conventions, they still debate whether this festival challenged or reinforced the existing cultural and social authority. Some (past and present) scholars claim that Carnival was a (harmless) outlet for impulses that threatened the social order.

Machiavelli, for example, stated that the Carnival celebrations ultimately served “to keep the city abundant, the people united and the nobility honored.” Others argue that the Carnival festival undermined the established world order and official culture by proposing a new model and counterculture. Mikhail Bakhtin, a famous Russian philosopher and literary critic, argued that Carnival embodied a joking popular culture that challenged absolute truths and resisted the mainstream culture.

Today, Carnival is a celebration of life and an invitation to live it to the fullest. “Who can sing of the spectacle, the unrestrained mirth, the banqueting, the unbought feast, the lavish streams of wine?” raves Statius, a Roman poet who lived in the 1st century AD.

“Ah! Now I faint, and drunken with thy liquor drag myself at last to sleep. For how many years shall this festival abide! Never shall age destroy so holy a day!” History proved him right. Many centuries later, in the Song of Bacchus, the most famous poem of his Carnival Songs, Lorenzo the Magnificent, the patron of  the Italian Renaissance culture, encourages the reader to forget about the harshness of life during the Carnival festivities by enjoying the fleeting moments of happiness: “Long live Bacchus, long live Love! Everyone sing, dance, and play! Hearts, be all on fire with sweetness! No faintness now or hint of sadness! Whatever is to be must be. Who is happy, let him be so. Nothing’s sure about tomorrow.”

Ultimate Review of The Best Beach Coolers in 2022

Best Fall Road Trips for Scenic Views in US

Ultimate Review of The Best Costco Beach Tents in 2022