How Does an RV Refrigerator Work? Everything You Need To Know! 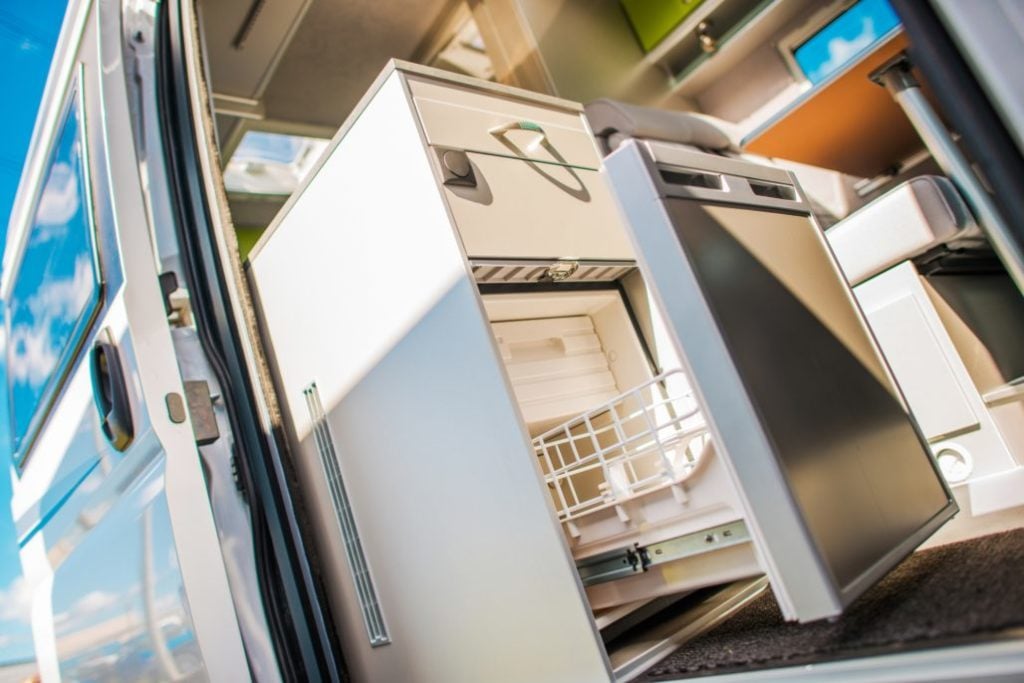 One of the most frustrating things about going camping without an RV is the fact that you likely need to carry a cooler with you. This becomes frustrating because you have to lug it in and out of your vehicle, continuously fill it with ice, and deal with soggy food items after they have been submerged in the melted ice for hours on end!

That’s part of what makes RV camping so enticing. Many people who started out their camping adventures in tents gladly switch to RVs for the added comforts that come along with RVs; hard sided shelter, on demand heating and cooling, and the added convenience of a refrigerator.

For a more in-depth explanation of how this process works, keep reading!

How do RV Refrigerators Work? 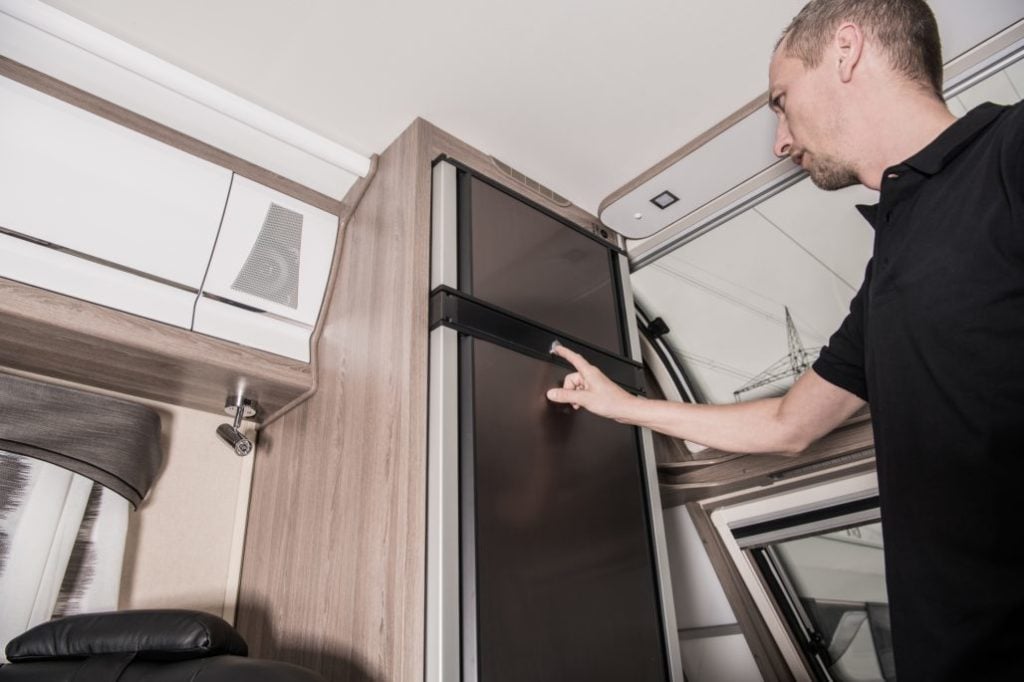 RV refrigerators work by using the absorption principle. Simply put, it’s a cooling effect that is gained when fluids like ammonia and water are repeatedly separated and combined to remove the heat from the air.

Inside of your RV’s refrigeration unit, you’ll find a few common components that will help with this process. They are:

Each of these pieces are necessary to ensuring that the RV refrigerator works properly. But how does each piece work and what do they do to help keep food cold?

Dry ammonia gas then passes through what is called the condenser. You can identify the condenser pretty easily! It’s usually the piece of the refrigerator that is at the top of the unit and has a series of metal fins that helps the ammonia gas shed the heat that was introduced to it by the boiler.

Once the gas has cooled down, it turns back into a liquid and uses gravity to help if flow down into what is called the evaporator.

At this point, the ammonia has had plenty of heat removed from it and is super chilled. This is usually at the top of the refrigerator, which is where the freezer section of the unit usually is.

Hydrogen is necessary because it helps lower pressure that is inside of the piping where the ammonia is. This causes the boiling point of the ammonia to be lowered quite a bit, which then causes the transfer of heat to happen! The ammonia is evaporated, even though it’s not heated.

This is where the evaporated ammonia removes heat away from the surrounding areas. The heat removal happens both inside of the refrigerator and to the food inside of it. This is what keeps the inside of your fridge nice and chilly!

After the super cooled ammonia liquid has passed through your refrigerator, it descends into what is called the absorber. The absorber plays an important role, because it introduces a mixture of ammonia and hydrogen gas.

This mixture is changed when the ammonia from the cooling phase is introduced to it, which causes the hydrogen to get separated away from the mixture and returns hydrogen gases to the evaporator and leaves only the ammonia in the absorber.

From there, the strengthened ammonia flows down further into the boiler section again, where it is combined with water and goes through the entire process all over again!

The entire process happens very fast. Chemistry and physics play a big role in the transfer of gases and heat as the ammonia is heated, cooled, combined, and separated during several steps in the procedure.

This procedure can be pretty complicated, which is why it’s important that you do as much as you can to help your RV’s refrigerator. So, what can be done to help it?

Proper Care and Maintenance of an RV Refrigerator 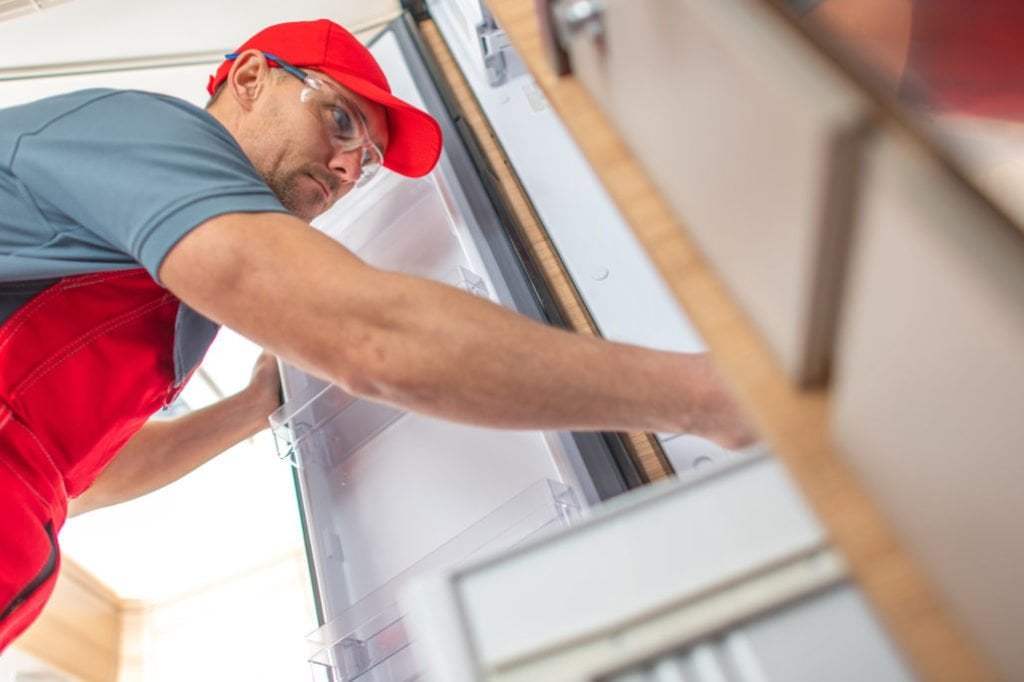 Whenever you use your RV refrigerator, it’s important that you do as much as you can to help it work properly. The first place to start is with the foundation. Whenever you go camping, you’ll need to ensure that your RV is perfectly level.

When your RV is level, your refrigerator functions in the proper manner. All of the gas and liquid flows smoothly through the system, which results in what you want, a chilly fridge!

But when it’s not level, there are a couple of things that can happen:

In both of these cases, you can lose out on the benefits of your RV’s refrigerator and at worst, have to replace it due to blocked pipes!

So, before you start up your RV’s refrigerator, be sure that your RV is completely level.

Aside from leveling your RV, what else should you look out for as indicators that there are potential problems with your refrigerator? 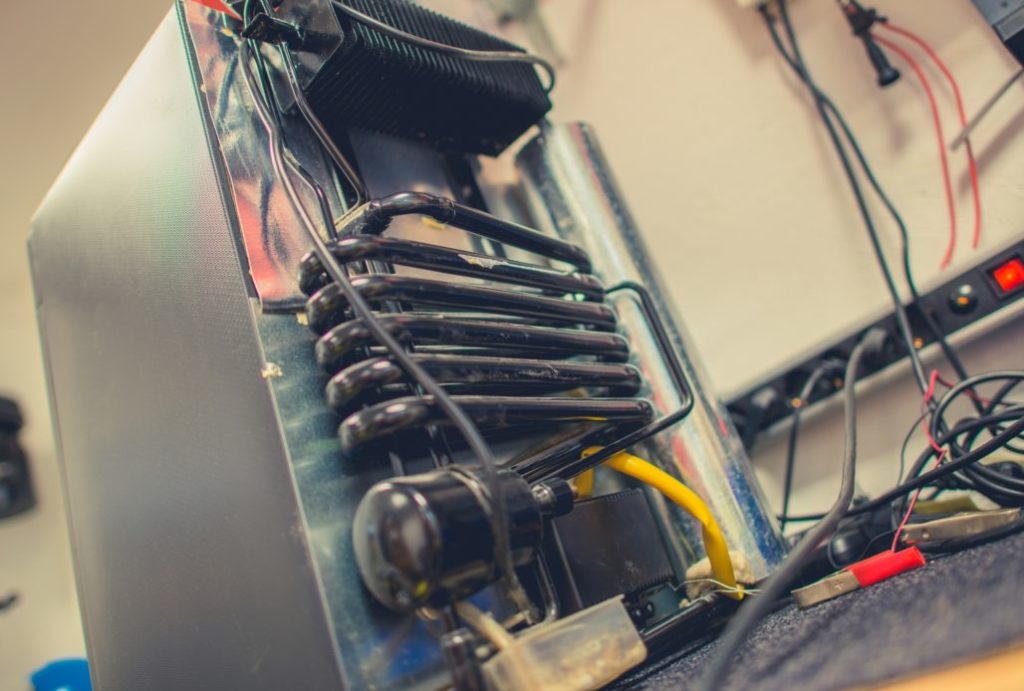 At least monthly, you should plan to inspect the cooling unit of your RV’s refrigerator. One of the tell-tale signs that you have a leak is when you look at the exposed piping you notice a buildup of yellow junk around the pipes. This is evidence that your piping needs to be replaced as soon as possible.

Another less obvious sign that your refrigerator is leaking is when you notice the smell of ammonia. This can be a potentially dangerous situation, as inhaling concentrated ammonia can cause burning inside of your eyes, nose, and lungs, which can ultimately result in going blind, damaged lungs, or even death!

The reason why you might be smelling ammonia is a bit less obvious though. In the back of your cooling unit lies the evaporator pipes. These pipes are encased in a bunch of spray foam, which helps to insulate the pipes from losing the cool air. While this is a good thing, the foam insulation produces an unintended problem: it doesn’t allow water to evaporate away from the system.

When the ammonia and hydrogen go through the evaporator, the cooling effect produced by the evaporation of hydrogen from the ammonia causes the pipes to cool. This cooling effect results in a buildup of condensation on the pipes. That condensation can’t go anywhere due to the insulating foam, so it tends to result in several rust spots to form on the pipes.

This can present a real problem over time. The hydrogen inside of the cooling unit is highly pressurized. Weak points that are formed by the rust can cause the pressurized gas to bust through the pipes and cause a leak.

Again, if you ever notice an ammonia smell inside of your RV, it is very important that you shut off your refrigerator, ventilate your RV by opening all of the windows and doors, and promptly evacuate the RV. Once you and your camping partners are safely outside of the RV, be sure to call an RV repair shop to see about having a technician come out to your campsite to fix your leaking pipes or to help remove your defective refrigerator.

Aside from checking for leaks, it’s important that your RV’s refrigerator has proper ventilation in order for it to work efficiently. But how do you check for that? 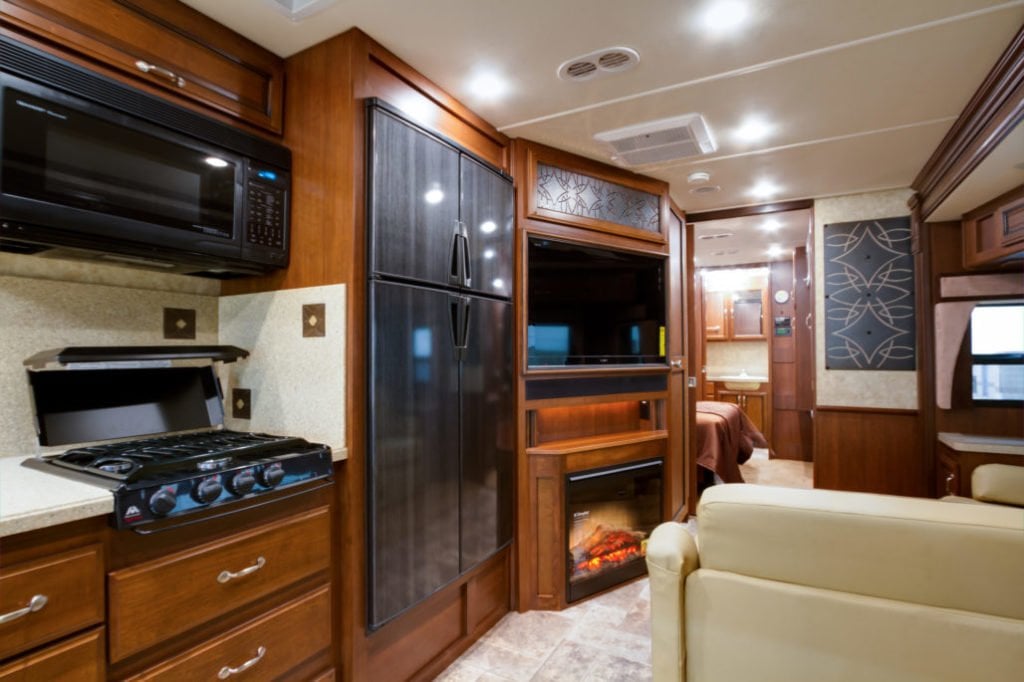 Ventilation helps with the moving of hot air away from your unit in order for it to achieve maximum cooling power inside. This is important not only to the efficiency of your refrigerator, but also to the functionality of it. Remember that part about the chemical that protects your piping from the corrosive effects of the ammonia getting too hot when the RV is not level and causes it to heat up too much and crystalize? Well, if you don’t have proper ventilation behind your refrigerator, you might have to deal with that same risk as well!

Go outside of your RV and locate the service panel for your refrigerator inlet vent. That should appear near the ground. Open that up and inspect it for any foreign objects that can cause it to lose out on the cool air from coming into the RV and cooling the unit.

Some common issues are the buildup of leaves and dirt. Be sure to clean those areas out regularly so that you get proper ventilation for your refrigerator.

One thing that you need to keep an eye out for is animals like squirrels, chipmunks, rats, and mice building their nests inside of that area. The ventilation area is nice and warm, so it may invite those sorts of pests to make your ventilation area their home! Be sure to clear any evidence of nesting out as soon as possible!

Ultimately, you need to focus on allowing the most hot air to be shed away from your refrigerator as possible in order to get the most life out of it. If the ventilation is clogged up, you’ll lose efficiency and longevity in your RV’s refrigerator.

What to do When the Refrigerator Stops Unexpectedly 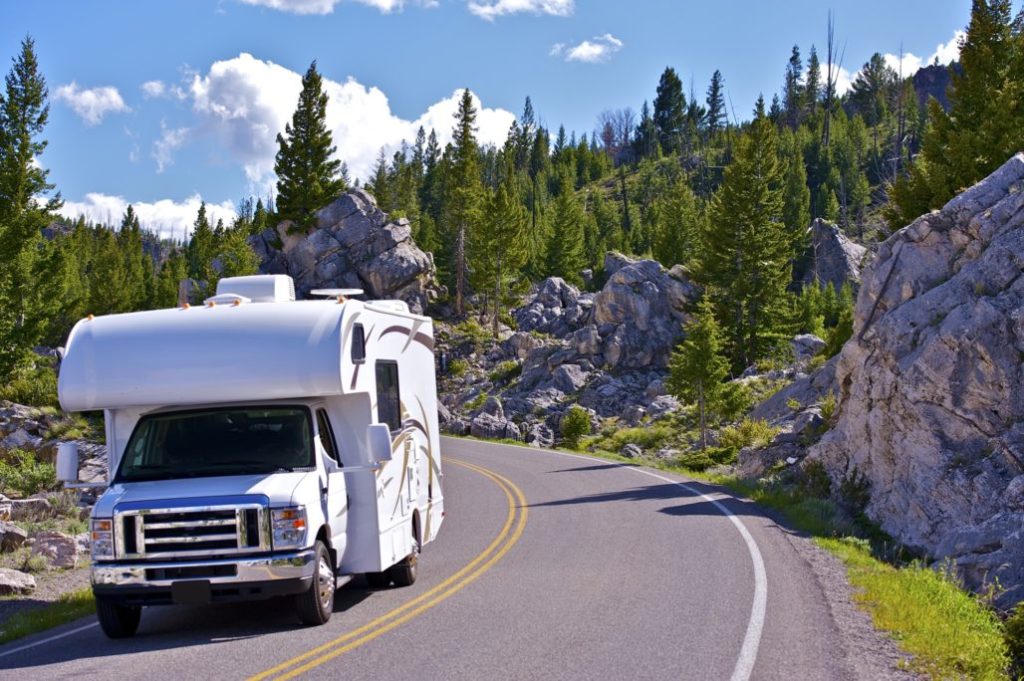 In the event that your RV refrigerator stops working out of the blue, be sure to do the following:

Keep your food inside of the refrigerator.

Unless it’s been several hours and you can track that the temperature is rising inside of your refrigerator, there isn’t a huge amount of urgency to move all of your food into a cooler. In fact, the cold food will keep the inside of the refrigerator cooler for longer, so it’ll be beneficial to leave it inside while you figure out what’s wrong.

Check that you’re still connected to power/that your propane tanks are still full.

RV refrigerators can work off of 3 power sources: propane, 12-volt DC electricity, and 120-volt AC electricity. Most campgrounds come standard with what is known as shore power, which allows campers to simply plug their RV into a continuous source of power. But if someone trips over your connection and it gets unplugged, you might lose power to your refrigerator. Be sure to check your connection to power first.

If you’re camping away from an established campground (like boondocking), you want to double check that your propane tanks in your RV are full. Always ensure that you leave your home with full propane tanks when you plan to go boondocking! This is important not only for the functionality of your RV’s refrigerator, but for the water heater and thermostat as well! If you’re propane goes empty, it’s important to refill the tanks as soon as possible to get your refrigerator back up and running.

Ensure that you don’t have any leaks.

RV refrigerators are a modern marvel. They allow people to travel wherever they please with the added convenience of having chilled, fresh food whenever they want! Turning on an RV refrigerator is pretty simple as all it requires is the push of a button once it’s connected to power or propane.

But the way that they work can seem overwhelmingly complex. Fortunately, you have read to the end of this guide and you now know how they work! And thankfully, you don’t need to be an expert at RV refrigerator functionality, because you know how to properly set up your RV to get maximum usage out of it. You also know what to do when you notice the efficiency starting to dip and how to handle an emergency!

What to Bring Hammock Camping? What Not to Bring?

What to Bring with you When you go for a Long Camping Trip?

How to Wash your Hair while Camping? & How to Protect Hair when Camping?

What To Do If Tornado Hits While Camping? Where To Seek Shelter?

What to Bring Camping with a 2-year-old