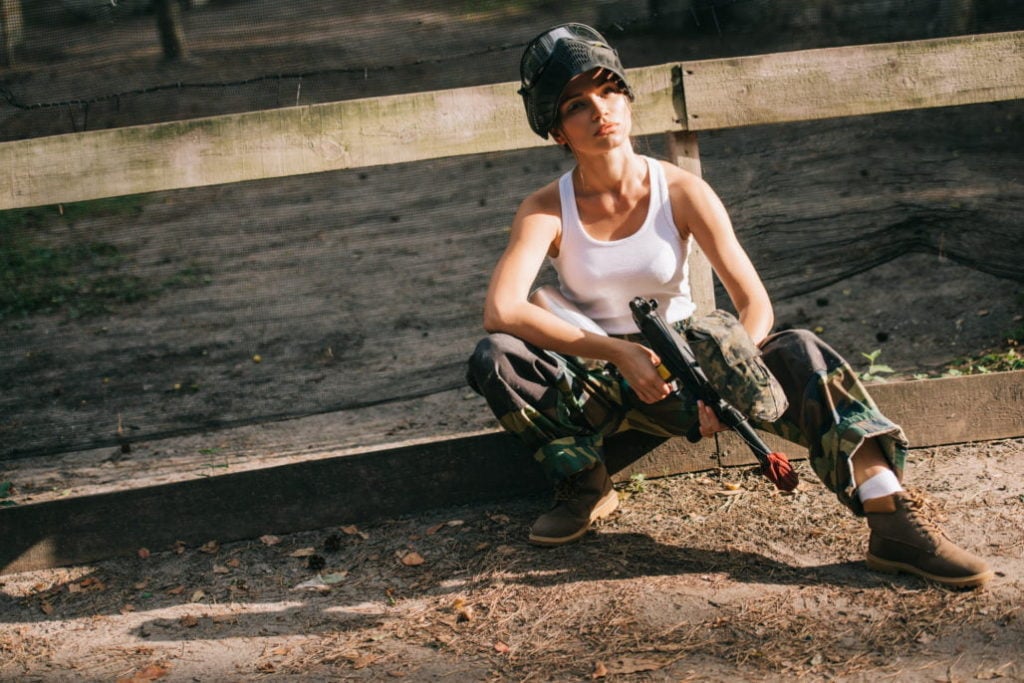 The Empire SYX is often called a high-end version of the Empire Axe or the Empire Mini, but is it all just that? For so long, Empire’s Axe line has been a favorite with their beginner-friendly and affordable markers. Both beginners and intermediate players applaud this paintball gun line because their markers have stood the test of time and have remained consistent and reliable.

So how is the Empire SYX different? For one thing, it’s often called just SYX as Empire tries to make a different branding on this gun. In terms of features, it still has a lot of similarities with the Axe guns save for the design. Learn more about the most high-end Axe paintball gun from Empire here.

Empire has been part of the paintball industry for the past few decades. It’s a household name for anyone who loves paintball. The company is popular for making stylish and compact guns that are beginner-friendly. However, even if most of their guns are marketed that way, a good number of intermediate players purchase Empire markers of their own.

There are so many Empire guns to date but the company has become famous thanks to their Axe line. This line of paintball guns are the most affordable mid-range markers you’ll find. Not only are they reasonably priced, they’re also reliable and lightweight. Perfect for beginners!

As a company, Empire prides itself in its ability to innovate its paintball guns based on the feedback of its users. Over the years, Empire has redesigned their guns to become sturdier, more compact, or more stylish. Why compromise the design when you can have a marker that’s both good-looking and accurate? No doubt Empire believes that their paintball guns don’t have to sacrifice aesthetics.

A Quick View of the Empire SYX 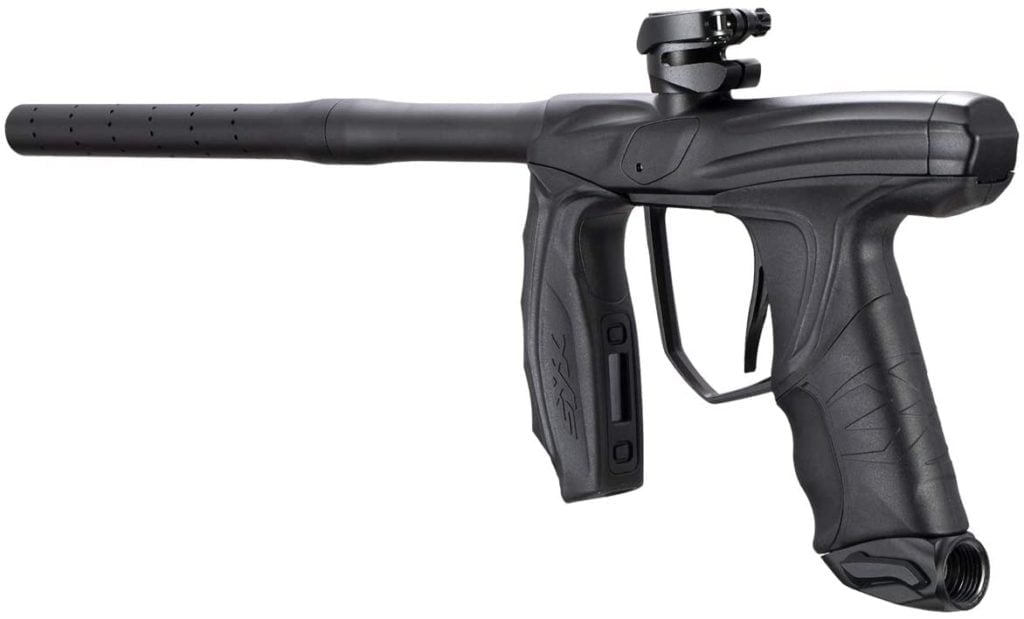 At first glance, the Empire SYX looks very compact and stylish. It comes in several colors but all of them are designed with a mix of silver, black, and a complementary color. Unlike most Empire markers that you’ll see, this one looks like it spent more time in the design department.

One of the reasons why the SYX looks so different from its Axe counterparts is that Empire wants to market this gun at a higher price point. Right now, this paintball gun retails for at least $700. A lot more expensive than the $300-$500 guns the Empire Axe line has. The SYX is meant to deviate from the affordable, entry-level image of the other Axe markers.

The Empire SYX comes with a lot of redesigned features starting from the bolt system, proprietary seal, and velocity. Most of these are geared towards a more precise, accurate, and ergonomic paintball gun. It’s said that because of the features and the price of the SYX, it only makes sense if intermediate and advanced players buy it. However, Empire has made the gun so easy to use that if a beginner wants to invest in a gun such as this, they won’t have a hard time using it.

Features of the Empire SYX 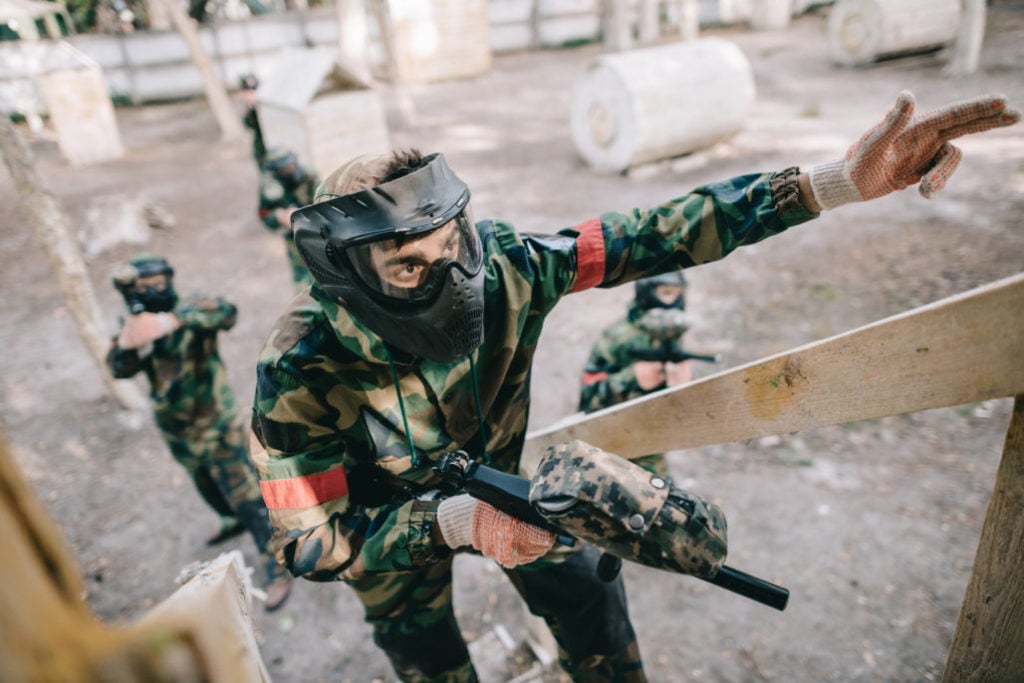 As a gun marketed to be high-end and advanced, what makes the SYX so great? Here are some of its notable features.

One of the major changes the SYX has gone through is the bolt system. This system has boosted the performance of the gun making it an ideal marker for all types of paintball games and players. This feature is only found on the SYX since it’s an improvement from the Axe markers’ systems.

What makes this system better? The poppet of the gun was changed. This might just be one change, but it has helped improve the overall marker by a lot. Before, the Mini GS and the Axe had problems with the poppet. Instead of using the same design for the SYX, Empire used O-rings instead of a proprietary seal.

The result? A gun that has a better performance and more efficiency than previous Axe versions.

The Empire SYX comes with a new barrel system. This system comes in 2 pieces amounting to 7.5 inches of hard aluminum. Although the length of the barrel is slightly shorter than most stock barrels, this durable barrel is enough to improve the overall accuracy of the paint gun.

Moreover, this barrel is equipped with a micro-honed system. In other words, it’s designed for improved shots to complement the efficient bolt system that the SYX has.

The SYX’s regulator was redesigned to improve on the Mini’s regulator. When coupled with the new bolt system of the gun, the redesigned regulator greatly improves the accuracy of the SYX. It’s like these two features are two parts of a whole. Without the regulator, the bolt system alone will be underwhelming.

Empire takes pride in designing paintball guns that are compact and ergonomic. There’s no doubt that the player’s comfort is one of the features common on every Empire gun that you’ll encounter.

When it comes to the Empire SYX, you’ll find that the grips are redesigned. Instead of a thinner grip (both the back and the front grips), their sizes were slightly increased and the grooves for the fingers are more obvious. The angle of the back grip is also more obvious.

The ergonomics of the SYX is meant to reduce the strain on the fingers and the hands when you’re playing very long games.

Pros and Cons of the Empire SYX 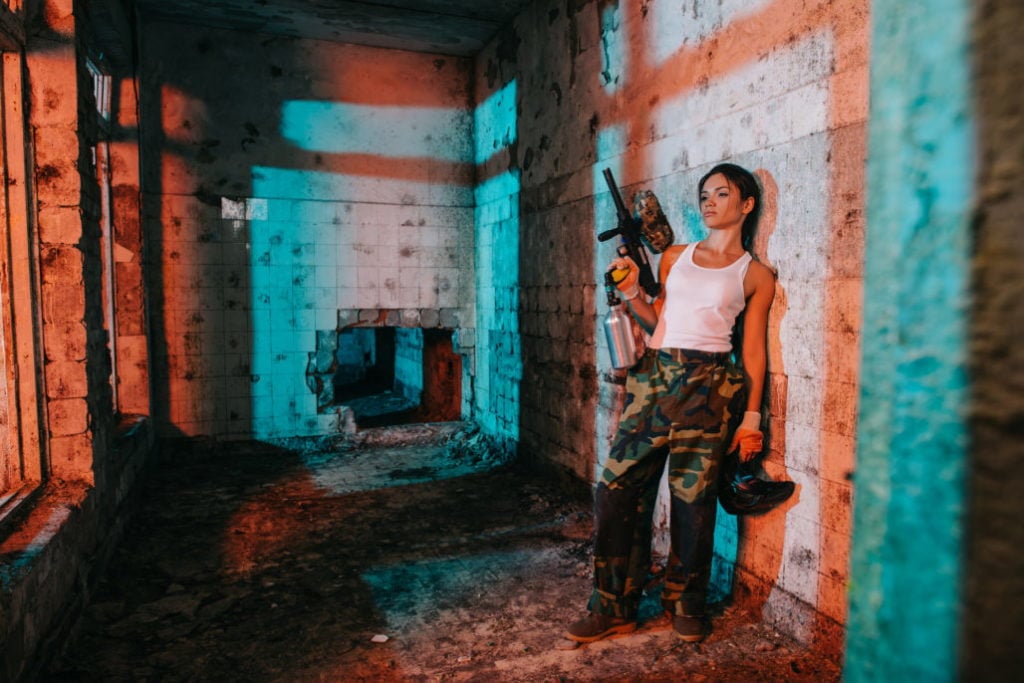 There are lots of changed features on the Empire SYX, but are they enough to warrant a price tag of $700? Here is a pros and cons list to help you decide.

As expected from any Axe paintball gun, the SYX is very lightweight and compact. It still maintained its easy design and there’s not a lot of fluff. As it is, the marker is already high-performing so you don’t need to add a lot of modifications that will make the gun bulky.

As expected, the Empire SYX has a more ergonomic design than its predecessors. It’s a lot easier to hold and manage thanks to the redesigned grips. The back grip is a little more angled which makes it comfortable to hold. The same goes for the foregrip. Both grips are covered with rubber so the gun doesn’t slip from your hand.

The revised bolt system has slightly improved the overall accuracy and efficiency of the Empire SYX. To give you an idea, it can now be reduced from 200 PSI to 165 PSI. This is a big change considering that at 165 PSI, you reduce the gas usage and the chances of having chopped paintballs.

One of the best things Empire did with the SYX is to reduce the recoil. This a side effect of having a more efficient system that uses less pressure. Compared to the other Axe paintball guns, the SYX has a less noticeable kickback. This way, you can increase your speed in taking shots.

Hate going to a paintball gun repair shop? You’re not alone. It’s a good thing that Empire made sure that you can open your own marker without needing to go outside and ask for professional help.

To access the regulator, all you need is an Allen wrench to open the marker up. There are lots of tutorials you’ll find online or you can take a look at the manual that the SYX comes with for guidance.

One of the most obvious disadvantages of the Empire SYX is its price. Yes, you can think that this gun has a lot of improvements which is why Empire increased its retail price. But the burning question is, is it worth it?

A lot of people say no and here’s why. First, the Empire SYX doesn’t have a significant difference from the other Axe guns when it comes to performance. Yes, there’s less recoil, it’s a lot more efficient, but they’re not that noticeable unless you’re so used to noticing the slight differences a paintball gun makes.

Obviously, this gun is not for beginners even if the features feel like they just came from a Mini GS (which is an entry-level gun). With its big price tag, the SYX is not for everyone even if it’s meant to be used by advanced players.

Like what was mentioned earlier, there aren’t a lot of improvements you’ll see on the Empire SYX. Sure, there are a few improved parts but the gun is more like a slightly revised version of the Axe guns. If you were expecting to have a marker that was so advanced in features, you’ll be disappointed.

Another disadvantage of the SYX is that it sometimes has tank leaks when it’s not regularly maintained. While it’s normal to maintain your gun every once in a while, the SYX makes it a little more inconvenient because it’s prone to gas leaks. If you’re the type of person who wants a low-maintenance paintball gun, then this marker might not be the best choice for you.

Here’s another reason why this gun is not for beginners – it’s not easy to disassemble. Except for the regulator, the whole of the SYX was not meant to be easily disassembled. Some would struggle to fix their guns mid-game. However, this is expected with guns of this price range. This just means that the Empire SYX is not a gun made for ease of use and maintenance.

As an Empire gun, you’re expecting that defective parts shouldn’t happen so often. However, the same can’t be said about the SYX. Some of its parts that come straight out of the box are defective. Although you can always contact customer services for this problem (they will gladly replace it for you), it’s an additional inconvenience that Empire should not have.

How Does the Empire SYX Compare with Other Paintball Markers? 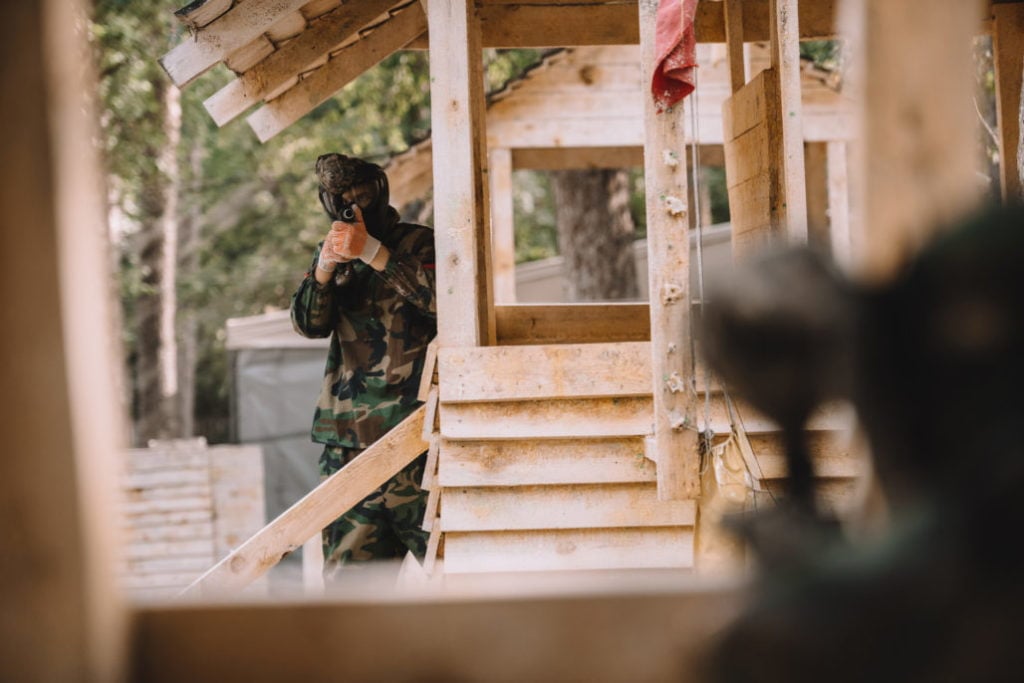 Because they’re in the same product line, it makes sense to compare the SYX to its other Axe counterparts. In all honesty, there are a lot of differences when it comes to design but not a lot on the mechanism of the gun.

First, the SYX has a more ergonomic design. The grips are more angled and bigger to accommodate larger hands. As for the trigger space, there isn’t any difference with the Axe markers. Some say that the trigger area is still too small. In terms of aesthetics, there’s no doubt that the SYX has a fancier design. But that’s just the appearance anyway.

The second is the performance. As a beginner, you will probably miss the improvements Empire made on the SYX. This is mainly because the performance tweaks are so subtle that advanced players will be the ones to notice it. But that doesn’t mean there aren’t enough changes. For one thing, the SYX is a lot more efficient.

Unfortunately, even after all the rebranding of the SYX to a higher-end and advanced marker, it still doesn’t feel like it’s any better than the other Empire Axe guns. The improvements are minor that you wouldn’t say it’s already professional-grade. 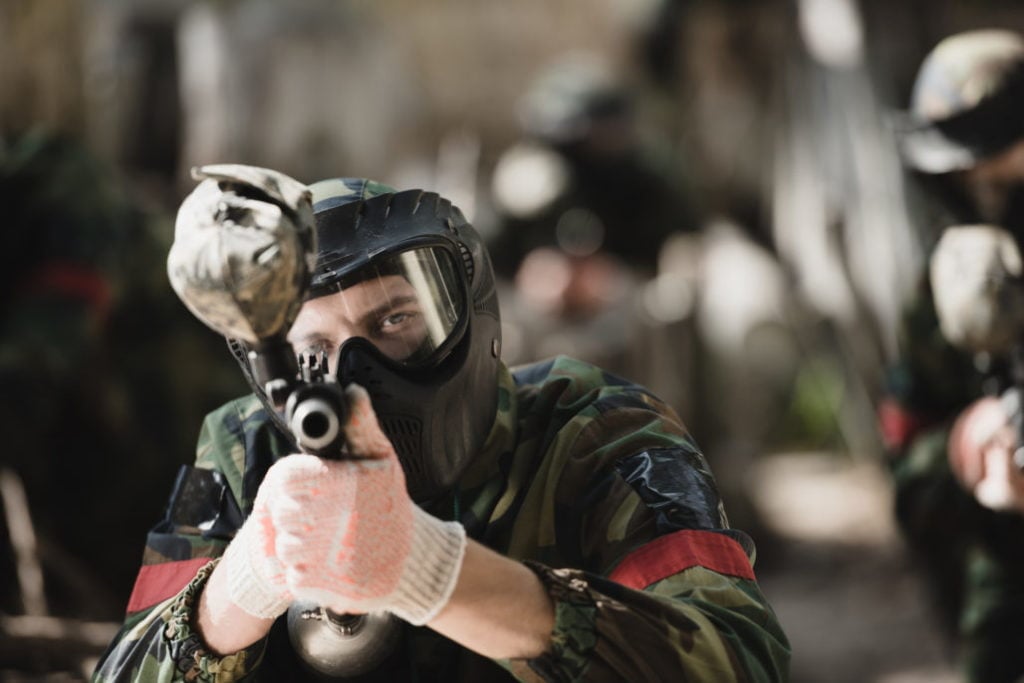 The Empire SYX has definitely improved a lot when it comes to the pain points other people had with the Axe guns. It’s more stylish, has a better fit on poppet, better bolt system, etc. However, these changes are not so big that you’ll notice that it’s a totally different gun from the other Axe guns.

In all honesty, if it’s not for the price, you’ll still find the SYX to be part of the Axe line. Empire doesn’t want to associate the SYX to the Axe line but the similarities are still obvious that anyone can mistake it for another new and improved Axe marker. The price is also too high unless you value the few improvements to justify the $700 tag price.