How Does A Paintball Gun Work? Here’s How 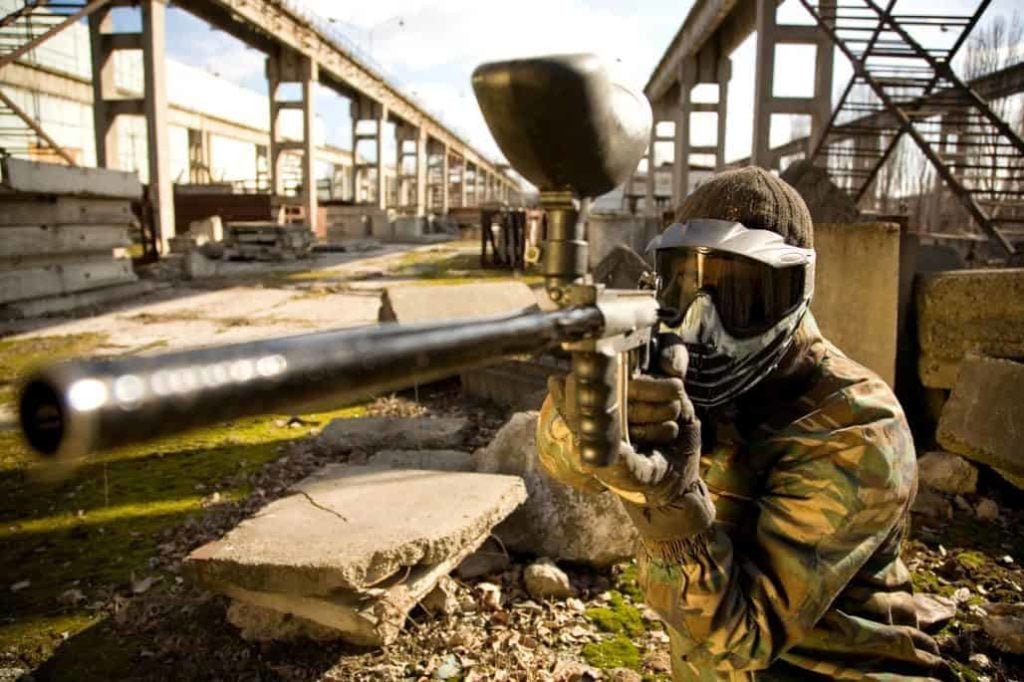 The Paintball Gun: The Basics 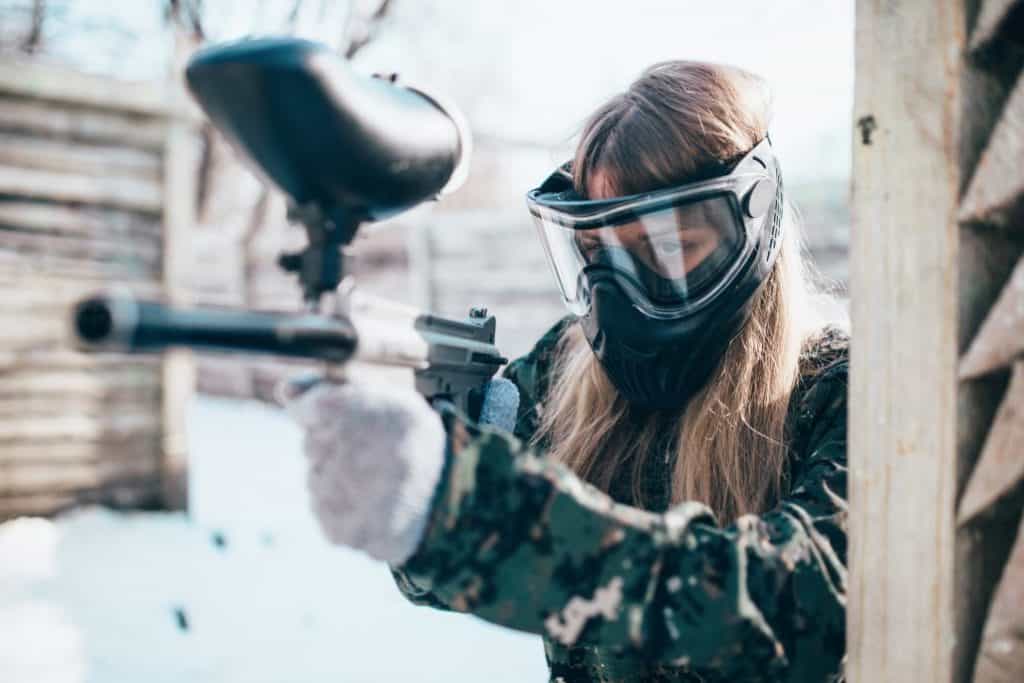 What are the parts of a paintball gun and how does it work? In concept, paintball guns work the same way even if there are already so many designs and types of paintball guns. By the way, it’s also called a ‘marker’ in some locations. You’ll see the two terms being interchanged in this post.

Going back, a paintball gun works by having a barrel attached to the gun. This is where you place the paintballs. This barrel doesn’t hold just one paintball because that would mean that you would have to load them one by one. Most markers allow you to put a number of paintballs so you can just keep on firing.

There are two types of paintball guns – a mechanical gun and an electronic one. Later, you’ll be able to see the differences between the two.

How Does a Paintball Gun Shoot a Ball? 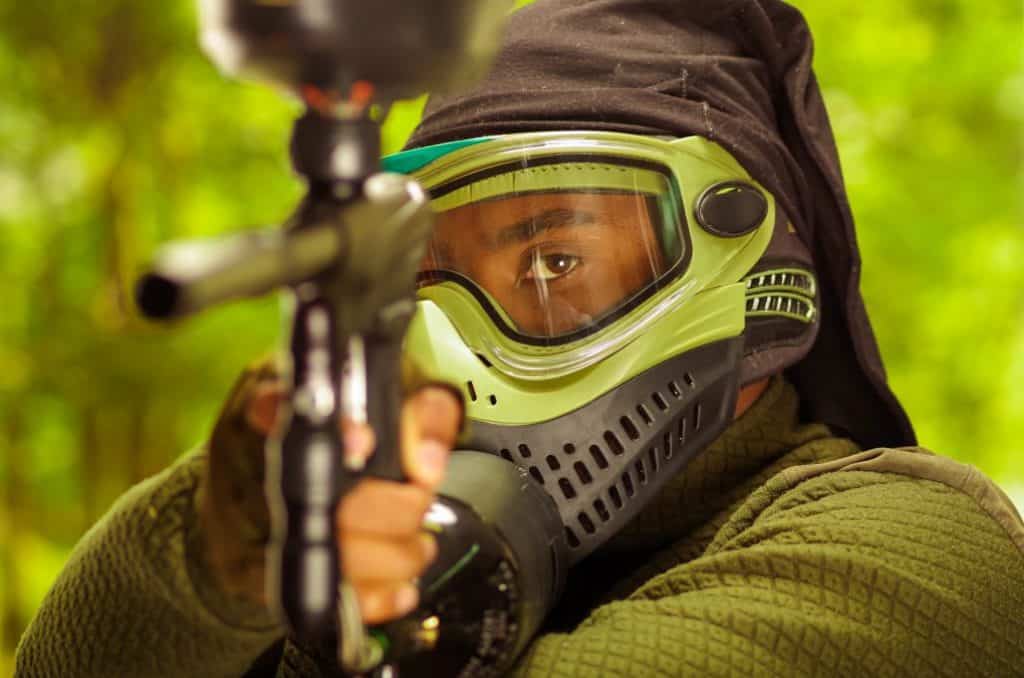 What about the gas? Does it simultaneously happen? No, it doesn’t. In fact, when the gun is loaded, that just means that there’s a paintball already in the valve tube. However, that doesn’t mean that it’s going to fire right away. The other parts are already on standby, but the chamber remains closed. For you to fire, you have to pull the trigger – similar to how normal guns are fired.

When you pull the trigger, it releases the hammer which is attached to the bolt. When the bolt is released, a sear is moved so that it doesn’t block the chamber where the compressed gas comes from. Once the sear is pushed aside, the compressed air is released which forces the paintball out of the gun and to your target. In other words, when the seal is removed, the compressed air goes out. If there’s no paintball, then there will just be a sound, but nothing will come from the marker.

After the paintball has been pushed out, the sear that was pushed aside goes back so that the chamber is not exposed and compressed gas can accumulate. To fire another paintball, you would have to go back to cocking the marker so that a new paintball goes down from the barrel. 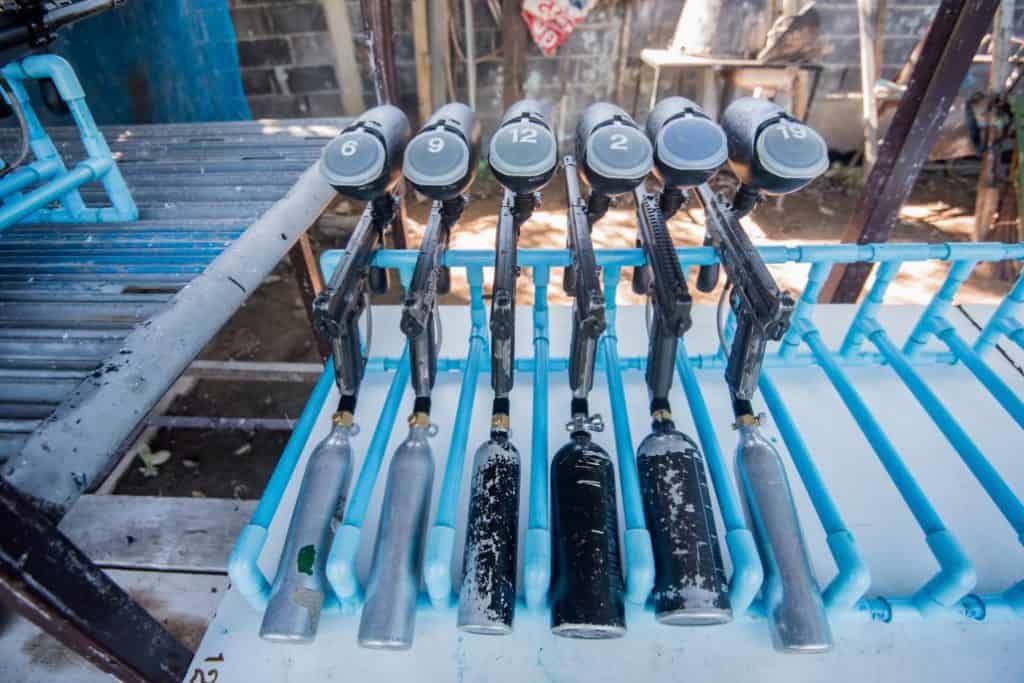 The first and most common type of marker is the mechanical paintball gun. Most of what you’ll see in a paintball field is a set of basic plastic pumps. Of course, there are other more sophisticated versions of the mechanical marker, but they’re also too expensive for public use.

How does a mechanical marker work? Taken from its name, a mechanical paintball gun has to be prepared mechanically for the whole thing to work. This means that you’ll be cocking the gun by yourself so that the other parts move to make way for the paintball to go out of the barrel.

One of the disadvantages of a mechanical marker is that it can only fire single shots. This means you have to reload all the time and the time that takes to be done might be too slow for you. To add to that, mechanical paintball guns also produce a slower velocity. Compared to the average 300 ft/sec, it can only do a maximum of 275 ft/sec. Some older and more basic guns can have a velocity as slow as 200 ft/sec.

So is a mechanical gun not ideal for playing paintball? No. If that’s the case, then they would cease to exist. Instead, more modern mechanical guns are able to produce velocities reaching to 300 ft/sec. Other advantages also include being cheaper and having parts that are always available in the market.

If you’re a beginner looking to start their paintball hobby, buying a mechanical marker is the ideal way to go. That way, you don’t make such a huge investment at the beginning of starting a new hobby. Plus, mechanical guns are very easy to use and set up.

Of course, if there’s a mechanical gun, there’s also an electronic version. How does it differ? In simple terms, the electronic guns automatically fire paintballs according to the firing mode you’ve set. They’re also called automatic paintball guns for that reason. Does that mean that you don’t have to pull the trigger? You still should, but pulling a trigger can release one or more paintballs depending on how many you’ve set.

If you’re wondering how a paintball gun can do that, the answer is in the circuit board. Circuit boards are one of the distinctive parts of an electronic paintball gun. They function as the control panel wherein they regulate the whole firing system of the marker.

Most people will prefer an electronic paintball gun because it is more accurate and consistent. Since the firing is done by the circuit board, you don’t have to reload every single time you shoot a paintball. You can also shoot a lot of paintballs one after the other. That’s already a big plus for paintball players.

All these are great advantages over the mechanical marker, but know that these come with a price. Electronic paintball guns are slightly more expensive, so it’s not ideal for beginners. Fortunately, there are some that you can buy second-hand if you really want to try an automatic one.

How Does a Paintball Gun Differ from a Normal Gun? 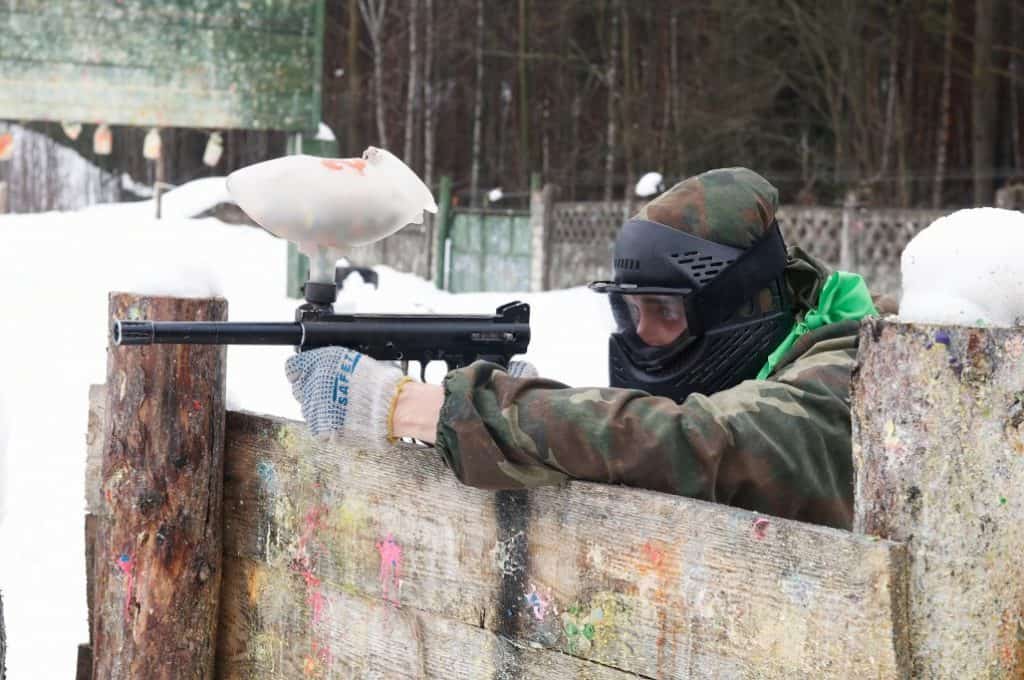 For obvious reasons, a paintball gun is not the same as a normal gun or any kind of airsoft gun. Aside from them firing shots and having their own laws on the legal age for them to be used, there aren’t a lot of similarities between a paintball gun and a normal gun. This means that if you’ve practiced some shooting at a shooting range before, those will not entirely be handy when you play paintball.

So how are the two different? First, what you shoot is a paintball and not a bullet or a pellet. The fact that a paintball is light and filled with non-toxic chemicals make it one of the least harmful objects to come out of any kind of gun. However, there are some DIY paintballs that make use of minor explosives like Snap Dragons. These shouldn’t be used on people since they can cause bruises.

Does a paintball gun harm people? Yes, it does. This is the main reason why every paintball player is required to wear protective gear. Gloves, vests, boots, and a visor or mask are all required to ensure the safety of the players. Remember, even if a paintball is just made of plastic and paint, they are still shot with high velocities. Hence, they can still cause bruises. The good thing about this is that bruises are the worst that can happen if they’re shot in a non-protected area.

Of course, a real gun is not used for sport. They are made for harm or self-defense, and they’re often used by people who are licensed to carry a gun like the military and the police. As for paintball guns, anyone can own them as long as they are of the right age as stated in their state’s laws.

Lastly, the feel can be slightly different but that doesn’t apply to all markers. Have you ever held a marker that feels like a real gun? Some of those also exist. However, if you’re used to playing paintball, you’ll be able to tell the difference. Usually a loaded paintball gun will still feel slightly lighter than a real gun. Plus, the recoil isn’t as strong as a real gun’s recoil.

Best Way to Aim a Paintball

What’s the best way to aim a paintball? Why does the paintball always fall to floor? If you’re a beginner, it’s only natural to have these kinds of questions. After all, it’s not like shooting and aiming come naturally to everybody. So how do you at least hit your opponent where you want to?

First, you have to know the nature of paintballs. Paintballs aren’t like bullets in spite of them being shot from a gun. Unlike bullets, paintballs are light which makes them easily affected by air. If a wind blows then there’s a high chance that your paintball won’t hit your target. That’s normal, though, so you shouldn’t feel bad especially when the weather isn’t cooperating.

You should also know that paintball guns aren’t built like normal guns. The compressed air in the chamber is not as forceful or not as high-pressure to make your paintball go directly to your target. Did you know that a paintball gun is only allowed to produce a speed of 300 feet per second? This is a lot lower than your normal gun, so holding your gun at a straight line is not the best way to do it.

How should you be holding a paintball gun then? To make up for the lack of speed and the lightness of the ball, the best way to aim is to slightly tilt the marker upward, say, around, 30-45 degrees. That way, the paintball makes a semi-circle when it gets fired. The movement of the ball then doesn’t automatically go to the ground.

It seems weird to aim higher and not directly at your opponent. Don’t worry, that’s a common concern. But if you want to hit someone far from you, then this is the best angle. Of course, when your opponent is just a few feet from you, you don’t have to aim with an angle since there’s not enough space in between for the ball to fall to the ground. By the time it loses its velocity, it would have hit your opponent already.

Knowing how a paintball gun works will help you in aiming and shooting properly and deciding on what kind of gun to use before you play paintball. While these markers are the same in concept, their slight differences in mechanism will make it easier for you to play the game. Complement the right marker to the right aiming style, then you’ll be able to shoot your opponents on the field!