What is trashcan lacrosse? Is it a real game or is it like a drill? If your coach asked you to play trashcan lacrosse, then it’s most likely that he or she sees the value in it. Coaches rarely ask you to do something for no reason, so even if trashcan lacrosse feels like a childish game, trust that you’ll learn a thing or two after trying it out with your teammates.

What is Trashcan Lacrosse? 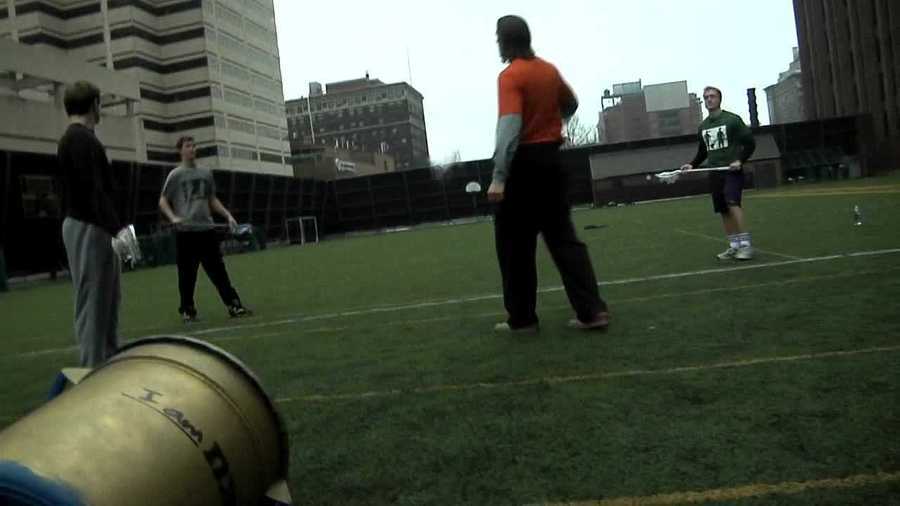 So what is trashcan lacrosse? Trashcan lacrosse is a small-sided game created by Peter Lawrence, NXT Sports co-founder, and former Hartford coach. Lawrence was one of the few coaches who didn’t see the value of letting children play in a big and wide field only to see them run the rest of the way and fail at catching or throwing a ball. Some might say that the kids just lack training, but face it, a 120-yard field is not the right size for children with short legs.

Since then Lawrence focused in mastering the 2-on-1 concept for playing lacrosse. Technically, there are four players, but only three play in the field since there’s one person acting as a goalie.

How Do You Play Trashcan Lacrosse? 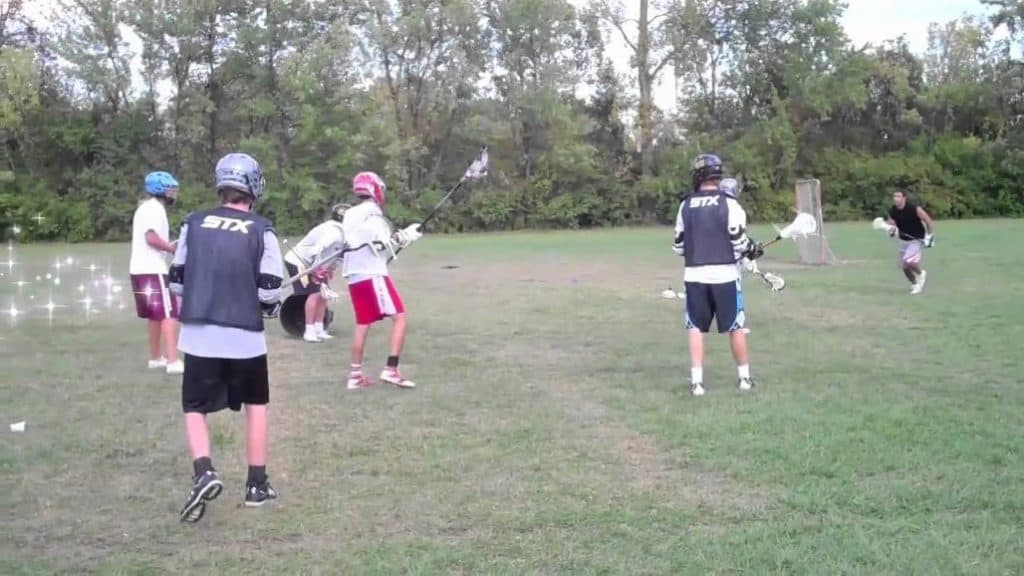 A lacrosse game with just four players? How do you even play that? It sounds silly at first, but after a while, you’ll find that it’s an effective drill to teach youth and new players some important skills in lacrosse.

First, you’ll need a trashcan. That’s pretty obvious. The trashcan acts as the net and one player is supposed to guard it. How can you score on such a small target? That’s the challenging part. But the good news is that trashcan lacrosse doesn’t have a lot of rules. Your goal is to be the first team to score two points.

That’s it? No rules? Of course, there are! But compared to official lacrosse games, trashcan lacrosse’s rules are simple. For example, the goalie is not allowed to have any body parts inside the bin. He or she is only allowed to block the bin by staying in front of the opening.

See also
How Good Do You Have To Be To Play College Lacrosse?

For the actual game, start by having two players each time. For the offense, have two players play on the field while the defense has one goalie and one defender. To know which team is the offense, flip the stick to start the game. The one who chooses heads (and gets heads) will be the offense. Otherwise, the team will play defense.

What are the Mechanics?

You already know how to start the game. How about the game proper? Here is a guide for the few rules you need to follow.

Trashcan lacrosse can be done almost anywhere because it’s pretty relaxed on the rules. However, the ideal venue is to have a field that has 10-12 yards of space. To make it easier to remember, have cones on the corners of your field. As for the trashcan, a generic bin will do as long as it has a wide mouth. There should also be enough space at the back of the can when you set up the whole area.

When you’re playing a defense, there is one of you who will play as the goalie. Compared to a lacrosse net, the target area is going to be pretty small; however, you’re not allowed to kneel so that you can block it more effectively. In fact, you can’t even use your free hand to pick up the ball. All you can do is block the opening with your stick, free hand, and other body parts.

See also
Can You Wear Football Cleats For Lacrosse? (My Opinion!)

The rules for scoring are no different from the original lacrosse game. This means that the whole tennis ball should be inside the trashcan for you to get a point. If it’s blocked, then you don’t get a point. If it goes halfway, that’s also not considered a point.

Teams alternate when it comes to being offense – just like in the real lacrosse game. Each team has an equal chance to score, but the first to reach two points wins the game.

Since there aren’t a lot of rules, how do you play the game? Well, you just follow how you would normally play lacrosse. But what’s better here is that you get to add your house rules. Some people claim that it’s a lot like street hockey, and to a point, it is.

What about violations? Apart from those that were mentioned above, there aren’t a lot of violations for trashcan lacrosse. Obviously, hitting people with the stick or your free hand is not allowed. You can’t also hit the trashcan when you’re trying to shoot. That’s about it, but you can always add some house rules with your team. 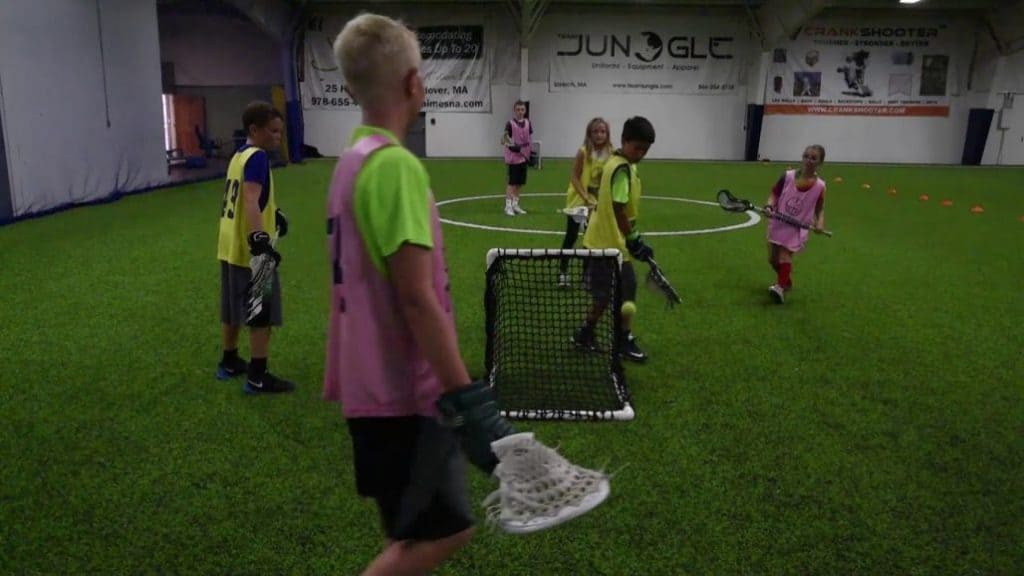 1. It helps you be more creative.

Do you ever have drills that only focus on footwork? While footwork drills are equally important, you lack the intensity of an actual game. That’s where trashcan lacrosse comes in.

Trashcan lacrosse doubles as a drill and a game. If you feel like practicing, then you don’t have to make it as competitive as the usual game. However, chances are, you’ll turn this drill into an actual game where you get a feel of being competitive. Nothing beats a game-like exercise.

3. You practice focus and speed.

It’s not that you don’t practice these skills when you play field lacrosse; it’s just easier to play a full game with trashcan lacrosse. Think about it – you don’t need a huge field. You also don’t need to wear your full gear. When it comes to throwing, cradling, and catching the ball, this game is much faster because there aren’t a lot of distractions for other players. It’s just you and the opponent.

4. You play all the positions in field lacrosse.

Well, not really, because you don’t need a midfielder in trashcan lacrosse. However, you do play the offense and defense on every turn. This helps you become a more versatile player. If you’re not sure of the position you want to take for field lacrosse, you can use this exercise to know where your skills lie.

5. You learn how to communicate.

Having trouble with communication? This is where trashcan lacrosse can help you. Just imagine – there’s only two of you in the team and if you don’t communicate, there is little chance that you get to score. Sure, there’s a possibility to play on your own, but the other team will notice this pretty quickly and they’ll take advantage of it.

See also
Box Lacrosse vs Field Lacrosse? How Are They Different?

If you aren’t used to playing team sports, then trashcan lacrosse is a great way to slowly ease into field lacrosse. Since you only have one teammate, you can use this as training to learn how to communicate properly. At least with trashcan lacrosse, you don’t get overwhelmed with the people you need to talk to.

This is the more popular benefit of trashcan lacrosse – that it’s more effective for youth players. As a youth player, you’re probably wondering why.

First of all, it’s hard for a kid to run the whole 120-yard stretch even if he or she is a fast runner. Add to that the other 17 kids that are running towards the ball trying to catch or throw. No matter how hard you train them, as long as they have short legs during that time, practicing them on a field is going to be counterintuitive.

This doesn’t mean that you shouldn’t bring the kids to practice in a real field. You can still do that, but make sure that you include a drill that has trashcan lacrosse.

Trashcan lacrosse definitely makes you a better player because you learn a lot of skills that will be hard to practice by just doing drills. Even when you can practice in a real field, playing trashcan lacrosse once in a while will help improve your speed, agility, and focus.