Box Lacrosse vs Field Lacrosse? How Are They Different? 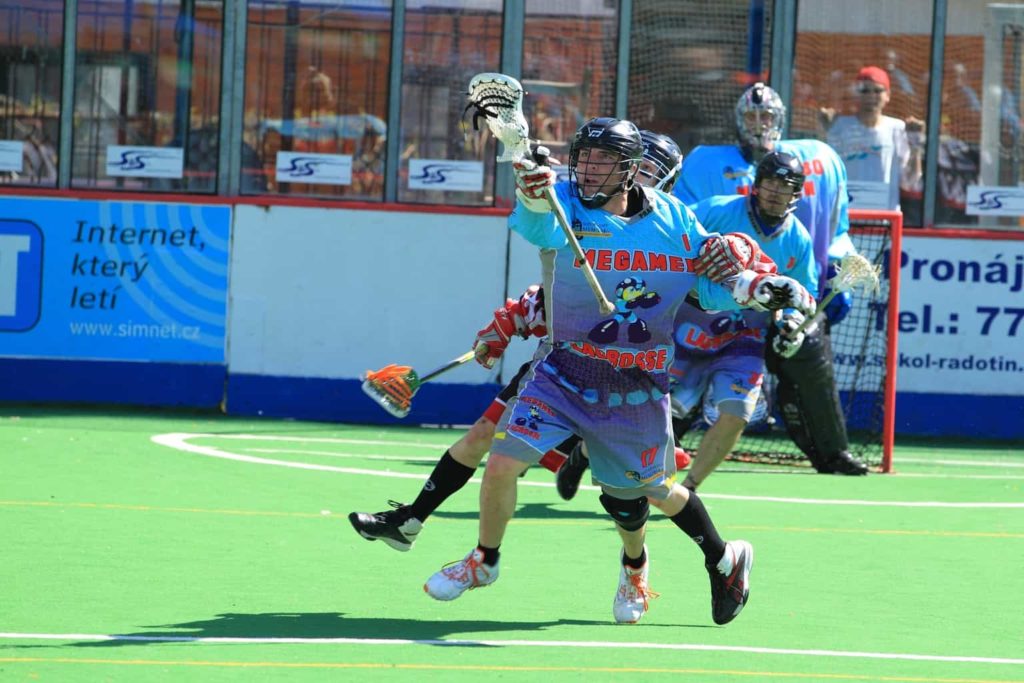 What’s the difference between box lacrosse and field lacrosse?…

Here at The Hobby Kraze, we don’t want to entice you into a sport such as lacrosse only for you to know one aspect of it. There are actually two types of lacrosse for you to choose from; box vs field lacrosse. And, there may be one or two reasons why you may choose one over the other.

Just for a little perspective, field lacrosse is the game of lacrosse you would usually envision when someone mentions it. And, in terms of box vs field lacrosse throughout school in the US, you’ll likely be introduced to field lacrosse, first.

With that, we’ll be giving you everything you need to know about the box vs field lacrosse debate and help you find which type of this popular USA game will suit you down to the ‘dime’ (this is a type of very good pass). However, we will be placing a small focus on the introduction and benefits to box lacrosse as it is the lesser-known game.

What is Box Lacrosse?

As you know, field lacrosse is the most common game of lacrosse played throughout the US and worldwide. However, it is not the only type. Because lacrosse is a game enjoyed on an open field and pitch, it can be difficult to enjoy in locations where the weather dictates your activity. In Canada, for example, the snow throughout Winter was too much for lacrosse players to be able to play their game. And, with that the box vs field lacrosse choice came to be,

In fact, because box lacrosse originated in Canada, they would often use pre-established indoor venues such as ice-hockey rinks. Meaning limitations to the gameplay and the rules were required in order to maintain soft play.

Nonetheless, the basic principles of ‘carrying a ball with a stick and throwing it on’ remain the same. Making the box vs field lacrosse debate a viable question among many players where it can be just as fun – if not, more – as field lacrosse.

2. Knowing the Differences of Box VS Field Lacrosse and How They Affect Your Game

Although we have briefly touched on this, there are some significant differences to box vs field lacrosse games that can impact your decision on which to play. In fact, there are so many changes to the game that may actually make you believe that box lacrosse is more like basketball.

See also
How To Throw A Lacrosse Ball Like A Pro: 10 Tips To Know

So, to help you understand the differences of box vs field lacrosse, the team here at The Hobby Kraze have gathered together a few of the key differences:

The Number of Players is Different

Much like with basketball, these six players are five field members and one goalie. And, due to this decrease in team players, the game strategy is played without defense when playing on the offense. Which, when you think about it, is quite like basketball and hockey games which are also played using indoor gyms.

The Goalie Is Different

Even though both goalies in the box vs field lacrosse games must be ready to defend and block a large flying ball heading their way, the size restrictions of the venue for box lacrosse has meant that box lacrosse is more physical and dangerous. With that, there have been changes to the goalie protection outfit to increase their chances.

Here’s the list of protection gear a goalie would wear in field lacrosse:

Here’s the list of protection gear a goalie would wear in box lacrosse:

Your Tools and Equipment will be Different

Not only is the equipment different for a goalie, but the tools needed for the players change in the box vs field lacrosse variances.

In a game of field lacrosse, there are two stick lengths. The first sticks, for defenders, are long to account for large field defending and passing. These sticks can be up to 72-inches in length. Then, the second type of field lacrosse stick is for the attackers. And, averaging around 42-inches in length, these sticks are much shorter when attacking the opponent’s game strategy.

However, in box lacrosse, the area for play is much smaller. Meaning everything else must be reduced in size to compensate. As well as this, another difference between the box vs field lacrosse sticks is that there are no size differences. As box lacrosse does not incorporate defense players, there is only one stick size: short. The size of the stick will only depend on the player’s height and can range from 40 to 46-inches.

Even the Venue Size is Changed

Your Rules on Engaging in Physical Contact will Differ

Both lacrosse games are physical games, but when it comes to finding which play between box vs field lacrosse is more physical-contact-based, it is box lacrosse. With the playing field being highly reduced, even the limited number of players can’t help being closer together and more likely to come into contact. And, with that, it is understandable that box lacrosse is commonly compared to indoor hockey games.

It must be noted that specific rules can change depending on which league you’re playing in and whether it’s men’s or women’s. However, there are some general rules of the lacrosse gameplay that change, too.

And, in terms of contact with the goalie, a field lacrosse game would not allow it. But, in a box lacrosse game, you can hit the goalie if they are in control of the ball and are outside of the crease.

The Accessibility Between the Games is Increased

The accessibility of box vs field lacrosse has changed for the better. While there are limitations to the game, box lacrosse can be played at any time of the year and in any location. So, if it’s too sunny, the air-conditioned indoor arena can help you out. Or, if the pitch is too icy and snowy, you’ll be covered in the indoor arena.

Often, even field lacrosse players will switch to playing box lacrosse when the weather doesn’t allow for field lacrosse games. Which is one of the reasons we wanted to discuss the box vs field lacrosse debate here at The Hobby Kraze: we want you to be able to enjoy your hobby all the time. Yet, the only downsize would be to make sure the indoor arena has a cover over the ice and isn’t in use. 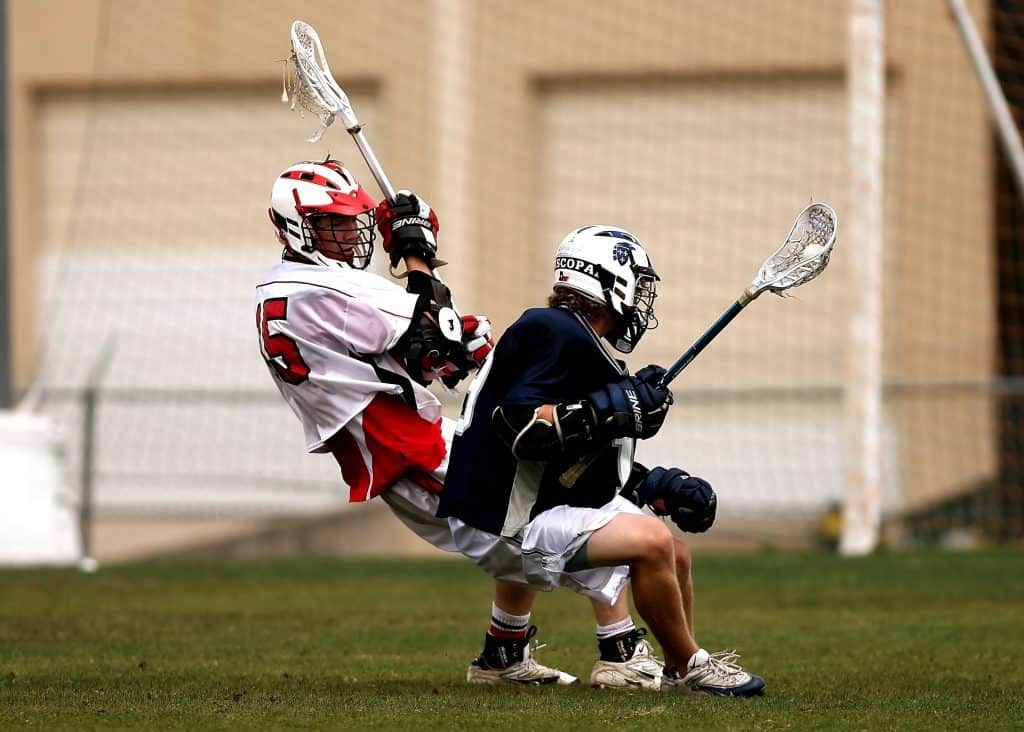 Yet, there are so many benefits to playing box lacrosse that you should be able to have an open mind to heading indoors. From having the obvious accessibility positives to being able to streamline your skills, here’s what could be in store for you as a box lacrosse player:

The most obvious advantage box lacrosse has over field lacrosse is accessibility. Come rain, snow or shine, as long as you have an indoor playing field and a regulatory-length lacrosse stick, your box vs field lacrosse woes will be no more. In fact, there are a number of lacrosse camps across the US and worldwide who hold training programs in box lacrosse venues for consistent skill checks.

For those who don’t like to run the length of an entire field, having the box lacrosse arena is perfect. When it comes to box vs field lacrosse and the strategy of energy, being in a smaller space means you won’t have as much energy expenditure for one ball pass. And, you can focus your energy on precision-aiming and scoring.

In terms of scoring, some may argue that, between box vs field lacrosse, box lacrosse can be harder. This is because of the physicality of the game. However, there are certain rules, team player reductions, stick length chances and gameplay variances that work together to even out the playing field. It all comes down to the game play that you’re used to.

Being Able to Develop All-Round Skills

Box lacrosse might appear to be more difficult than field lacrosse. And, this could be down to the role played by each player. As established, the field lacrosse players have three options: defense, attack or goalie. While box lacrosse, on the other hand, has a player and a goalie.

During gameplay, the box lacrosse player must learn how to be both the attacker and the defense due to the reduced team and venue sizes. With this, it makes each player more skilled in the lacrosse sport while enabling you to play any position throughout college lacrosse. Check out the requirements of college lacrosse in our other article; “What Experience is Needed to Play College Lacrosse?”.

See also
How Good Do You Have To Be To Play College Lacrosse?

You Can Improve Your Decision-Making Skills

One of the biggest upsides to playing box lacrosse during the off-season or rainy days is the developed skill set.

As you’ll be in a smaller environment with smaller sticks and a bigger goalie, you have to be quicker, more nimble and smarter about your moves. This perk allows you to spend more time developing your game skills in defense, attack and pass than running across a long field.

With box vs field lacrosse having different error margins, having to be in a smaller court with box lacrosse means you have far less room for mistakes. Your overall decision-making skills will be sharpened, and you’ll adapt to being under demanding pressure from those scrambling around you.

Big Goalies Will Teach You How to Fake and Score

A final advantage from the team here at The Hobby Kraze is tactics. In basketball, there is a trick called ‘faking’ where you trick your direct opponent into thinking you’ll be moving or passing in one direction and then going in the other. This manoeuvre is a transitional skill for many other sports and games such as soccer and football.

In box lacrosse, you’ll have a smaller playing field, closer opponents and a bigger goalie (due to the extra padding). And, without faking, there’s a high chance the goalie can predict and block your shots. Which means, you’ll need to be able to learn how to fake to make a precision shot for your team. In turn, you’ll be bettering your skills and becoming a more desirable player to college lacrosse coaches.

To bring this article in the lacrosse series to a close, we can definitively say there are plenty of differences throughout the box vs lacrosse debate. To the extent where they are often considered two separate sports altogether.

So, if you’re looking for a more challenging version of lacrosse, you should try your stick at box lacrosse. Or, have a go at some of the other hobbies we have here at The Hobby Kraze. From volleyball to squash and from kayaking to hiking, you’ll always be able to find a sporting hobby to suit you.